OLED laptops are an idea whose time has come

The Spectre x360 15 AMOLED has an amazing screen, but it isn’t without other faults

Share All sharing options for: OLED laptops are an idea whose time has come

OLED has been the de facto display technology in high-end smartphones and TVs for a few years now for good reason: it combines rich colors with a wide range of contrast and inky-deep blacks that just can’t be matched by other screen types. But while you may have an OLED screen in your pocket or hanging on your wall, you likely don’t have one in that other device you spend hours looking at every day: your laptop.

There have been a few laptops released over the years with OLED screens in them, but none ever became particularly popular or sold very well. Early OLED laptops struggled with high battery consumption and high prices, which made them hard to accept compared to the more price- and power-efficient LCD screen options.

That’s looking to change, though, as this year, there are a number of new laptops on the market with OLED screen options and without exorbitant markups. Lenovo, Razer, and HP all have announced or released OLED laptops in the first half of this year with similar display specs across the board. They all have 15-inch touchscreen panels with 4K resolution and 60Hz refresh rates. (Yes, they are all using basically the same Samsung panel, which is what dictates the size, resolution, and other display specs.) That’s larger and has a higher resolution than what we’ve seen in prior laptops with OLED screens.

I’ve been testing out the HP Spectre x360 15 AMOLED (what a name) for the past few weeks, which puts one of those panels in the refreshed Spectre x360 design that was released late last year. It’s priced at $1,999, a not-insignificant $400 premium over an LCD-equipped version with the same specs (though the OLED model does come with 1TB of storage versus 512GB in the LCD version).

The Spectre x360 15’s display is tremendous, and I see no reason why someone would pick an LCD over this OLED, given the option. It’s absolutely worth the higher cost. The screen is bright, colorful, pixel-dense, and has those trademark rich blacks that have made OLED screens so desirable in phones and TVs. Unfortunately, the wonderful screen doesn’t make up for the HP’s abysmal trackpad, so I don’t recommend running out and buying this laptop in any configuration. But what it does show is that OLED laptops’ time has come. 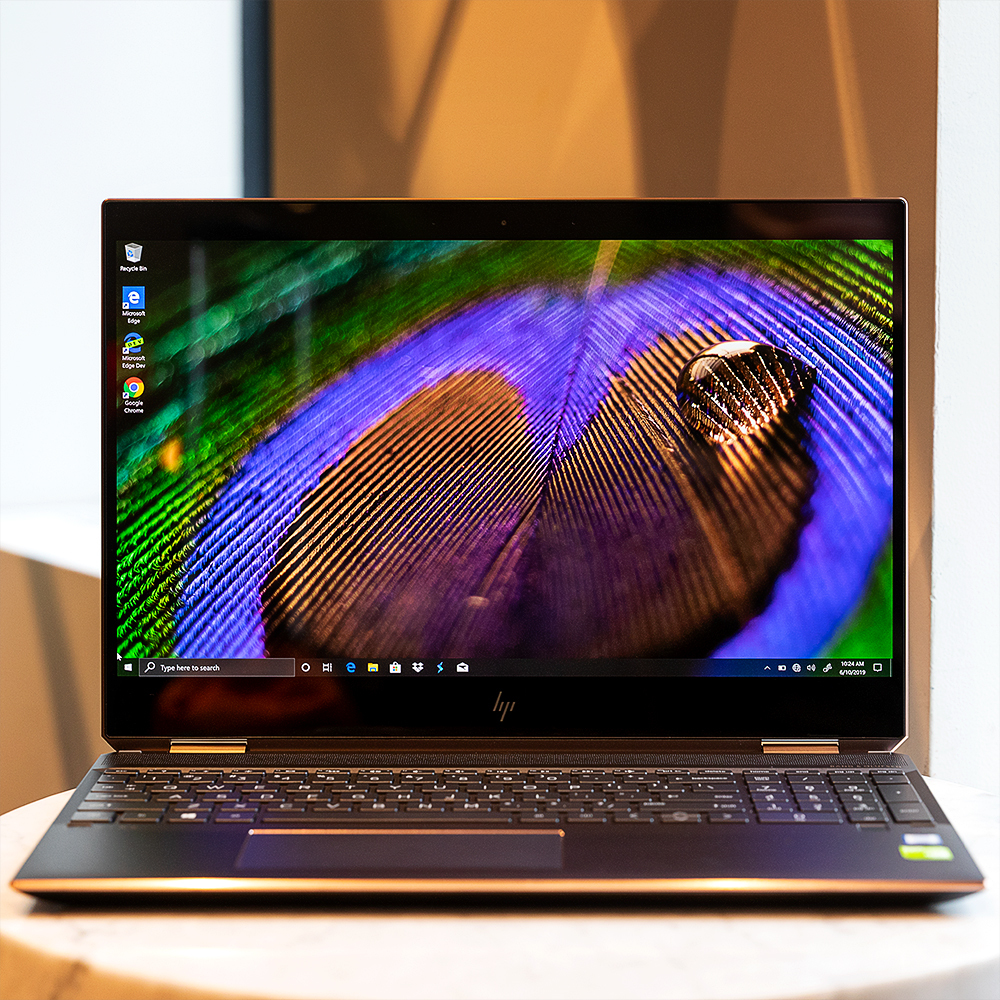 The most noticeable thing when you first start using the Spectre is how punchy and vibrant the screen is. Colors look like they are popping off the screen, but they aren’t so overly saturated that they appear cartoonish. On the opposite end of the spectrum, the blacks are as inky and deep as they are on an OLED TV. Watching Netflix in 4K on this screen is truly a delight.

In terms of color reproduction, the OLED displays 100 percent of the wide-gamut DCI-P3 spectrum (compared to 82.2 percent on the LCD HP offers), which means the greens and reds are extra rich and deep. It has a rated contrast ratio of 462,989:1, which is what provides those deep blacks. It also emits less blue light than LCD screens, so much so that HP didn’t feel the need to include any of the extra blue light-blocking filters or software that have started popping up on laptops with LCD panels.

Vibrant colors, great viewing angles, deep blacks — the Spectre’s OLED screen has all of the things you’re familiar with on OLED phones and TVs

The Spectre also has excellent viewing angles — which is useful if you’re flipping it around into the various positions of a 2-in-1 computer — and it doesn’t have any ghosting or weird artifacts when scrolling quickly. This isn’t an ideal screen for gaming since its refresh rate is the standard 60Hz and not 144Hz, but for any other purpose, it’s incredible.

On paper, the x360’s screen isn’t as bright as on other premium laptops, like the MacBook Pro. It tops out at just over 350 nits, which is plenty bright to use in any sort of indoor environment, but it might be tough to see outdoors on a sunny day.

There are other compromises for the OLED screen as well. The x360 configuration with the OLED option has a midrange quad-core Core i7 processor and entry-level Nvidia MX150 discrete graphics, as opposed to the six-core chip and 1050-series GPU you can get with the highest-end x360. HP told me it limited the chip options because the OLED screen is more power-hungry than the LCD it uses in the other model, and it wanted to maintain a certain level of battery life. So you can either have the fastest internal components or the best screen, but not both at the same time, which is frustrating.

That isn’t to say the Spectre is slow. It’s more than adequate for daily productivity work, photo editing, and even some light video editing. But if you really need processing power, it won’t be as fast as other laptops in this class or even HP’s higher-end x360.

For battery life, I averaged just over six hours between charges in my daily usage, which consists of browsing the web in Chrome, using Slack, email, Word, and Twitter with the screen at 50 percent brightness. That’s about average for a 15-inch laptop in my experience, so the OLED screen isn’t really hitting the battery too much more than normal. (HP rates the battery life at 13.5 hours, but that’s based on a looping video test, not actual work, so take it with a grain of salt.) I’d expect longer battery life from a smaller, more portable laptop, which makes the battery performance of this generation of OLED screens match the size available nicely.

The rest of the Spectre x360 15 AMOLED is basically the same as the Spectre x360 13 I reviewed earlier this year, with the exception of the additional number pad next to the keyboard and a full-size HDMI port in addition to the two Thunderbolt 3 ports.

The keyboard is easy enough to type on, the hinge is flexible and sturdy at the same time, and there are enough ports available that I can leave dongles at home. It also has a physical switch to turn off the webcam, precluding the need to put a gross sticker or cover over it.

The Spectre suffers from the age-old HP problem: a terrible trackpad

Frustratingly — and if you’ve read any of my prior HP reviews, you know what I’m about to say — the trackpad is abysmal. I’d go far enough to say it’s even worse than the 13-inch model’s. It is large and has a smooth glass finish and reassuring click, but scrolling with it is miserably choppy, multifinger gestures are slow and frustrating to execute, and it has poor palm rejection. It’s bad enough for me to say that you should not buy this computer, full stop. (Scrolling in the beta version of Microsoft’s Chromium-based Edge browser is basically nonfunctional as two fingers are always read as a right click, not a scroll, but since that’s still technically in beta, I’ll give HP a pass on that one.)

The root of these problems, once again, appears to be HP’s use of Synaptics drivers instead of Microsoft’s far superior Windows Precision drivers, which almost all of the Windows laptop world has switched over to. HP appears to finally be changing course with some of its most recent models and finally adopting Precision trackpads, but sadly, this Spectre isn’t one of those.

So you should look at the Spectre x360 15 AMOLED as a good example of a laptop with an OLED screen that’s practical, relatively affordable, and doesn’t make any major compromises for the better display. As I noted earlier, HP is not the only laptop maker with an OLED laptop this year, and with prices coming down on the panels themselves, I’m sure there will be plenty more to choose from in the near future.