Share All sharing options for: Ecobee’s new SmartThermostat is faster, sleeker, and a better Alexa speaker

Ecobee has officially announced its latest thermostat, the simply named SmartThermostat. This fifth-generation model looks very similar to 2017’s Ecobee4, and it shares that model’s built-in Alexa smart speaker features. But the new SmartThermostat does have a number of upgrades, including faster performance, a louder, better-quality speaker, nicer materials, and a completely redesigned remote sensor. The SmartThermostat is available starting today for the same $249 price as the prior model from Ecobee’s own website, Amazon, Best Buy, Lowe’s, and Home Depot.

As far as its connected features go, the SmartThermostat has exactly the same capabilities as the Ecobee4 and Ecobee3 before that. (In fact, if you are upgrading from an Ecobee3 or Ecobee4 to the SmartThermostat, you can program your existing room sensors to work with the new thermostat.) It has all of the stuff you want in a smart thermostat: intelligent scheduling, smartphone app control, and presence detection so it can automatically tell when you’re home or not and adjust your HVAC system accordingly. Ecobee’s key differentiator is the included remote sensor, which allows you to measure the temperature in different parts of your home and balance the system accordingly, without the need for multiple zones.

The remote sensor can also detect presence, so the system can bias itself based on where people actually are in your home, which is something Nest’s optional remote sensors cannot do. The SmartThermostat’s remote sensor has a completely new design, with up to five years of battery life, a pairing range of up to 60 feet, and improved wide-angle detection of motion activity. It also comes with a new magnetic mount and a wall mount included in the box in addition to the stand for more flexible placement options. The SmartThermostat includes one sensor in the box; you can buy more in packs of two for $79. The system can support up to 32 sensors at a time.

Our review of Ecobee SmartThermostat 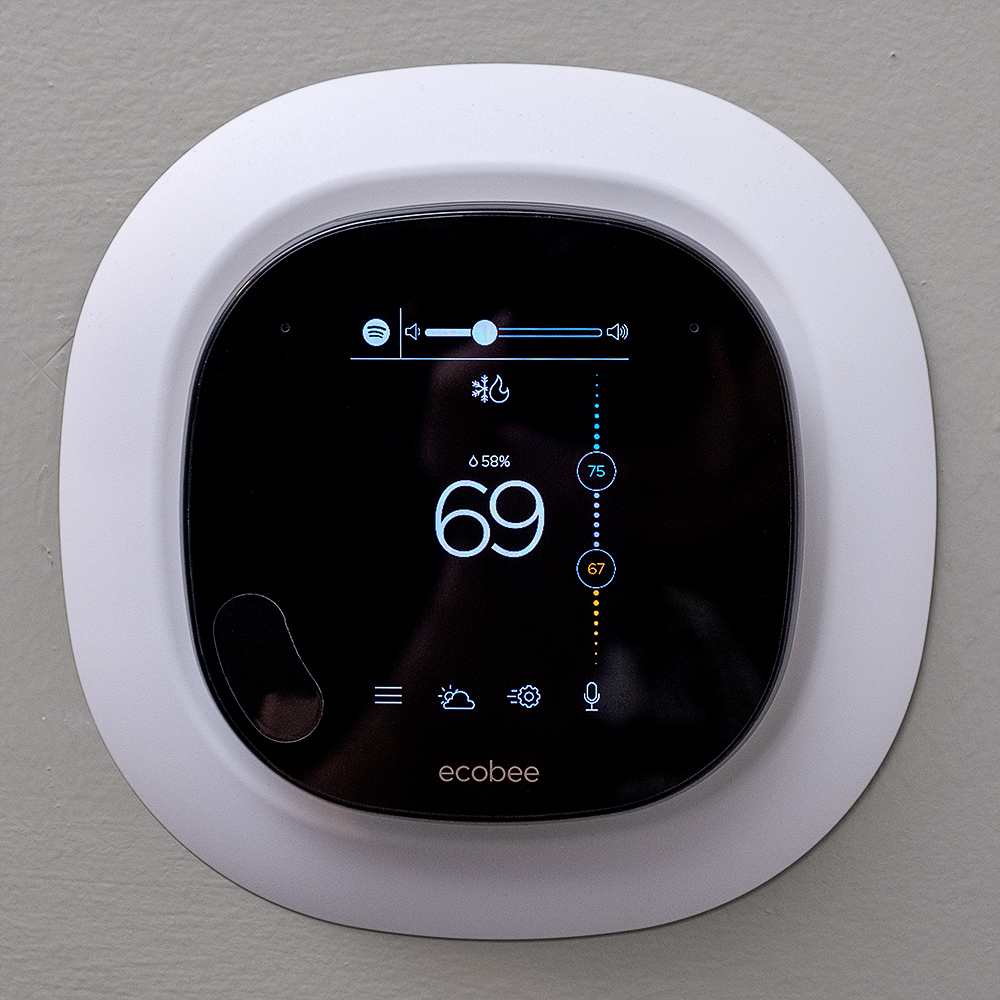 The new remote sensor is nicer to look at than the prior model, but I’m disappointed that it doesn’t add the ability to measure humidity; it still only measures temperature and detects motion. The system also still takes a long time to switch between home and away modes, even when it hasn’t detected any motion activity for over an hour on any of the sensors, which has been an ongoing frustration with the Ecobee for me.

The SmartThermostat uses the same installation process as the Ecobee4, and it supports the same types of HVAC systems. Installing the thermostat in my home was a painless 10-minute affair that involved taking the old thermostat off the wall, disconnecting the wires, and connecting them to the new Ecobee. I then just had to mount it in the same place and get it on my Wi-Fi network. That’s largely due to the simple setup of my modern forced-air heating and cooling system: all of the wires necessary to power the Ecobee were already in the wall, and I was able to follow the included installation instructions very easily.

This is not the case for every home, so your mileage may vary considerably. A colleague of mine had an Ecobee3 installed in her condo and needed to have an electrician install extra wiring in the wall to route enough power to the device (at a significant cost of labor above the price of the thermostat itself) to make it work. Ecobee does partner with professional installers, which can handle the installation for you if it’s beyond the simple setup I have.

Design-wise, the SmartThermostat is a dead ringer for the Ecobee4. Even when side by side, I can’t tell them apart. The new model trades the plastic panel over the touchscreen for a glass cover, which is certainly much nicer to touch, swipe, and interact with. Still, there is a lot of room for improvement here, such as using an OLED screen instead of an LCD and making the display itself occupy a much larger percentage of the thermostat’s front. Right now, the display still looks like a small rectangular window in the rounded square shape of the thermostat’s face, as opposed to one seamless display.

Further improving the interaction experience on the new SmartThermostat is its beefed-up processor and improved touch sensitivity. As a result, swiping around on the touchscreen, navigating the menus, and changing settings is much easier and faster than before, though it’s still not quite as simple and direct as Nest’s control ring system.

Better Wi-Fi compatibility is nice, but that won’t prevent Ecobee’s own servers from going down

The new model also adds compatibility with both 2.4GHz and 5GHz Wi-Fi networks, for more reliable connectivity. Better connectivity with modern Wi-Fi networks is certainly appreciated, but Ecobee’s problems over the years have largely been due to its own servers going down on repeated occasions, preventing any remote control of the system. An upgrade to the thermostat’s Wi-Fi capabilities won’t fix that problem.

While the Ecobee4 introduced the idea of having Alexa built into an appliance as opposed to a separate speaker, the Alexa experience left a lot to be desired. For the SmartThermostat, Ecobee has upgraded the microphones, speaker, and capabilities, and the improvements are noticeable. I’m not quite sure why you’d want to listen to music through your thermostat, but the SmartThermostat’s speaker is now good enough and loud enough that you could if you wanted to. It also now supports Spotify Connect and Bluetooth connections, so you can send music from your phone to your thermostat.

Even better, the new SmartThermostat does a much better job of existing with other Alexa devices. In the week or so that I spent testing the device ahead of today’s announcement, it never responded to a command that was directed to another device, which was a continuous problem with the Ecobee4. (It was so bad on the last model that I ended up disabling the microphones entirely, neutering the Alexa assistant inside.) The usefulness of having Alexa built into your thermostat will vary depending on where it’s installed in your home, but I can at least say that now it won’t get in the way like it did before.

Ecobee has also added Amazon’s Alexa calling, messaging, and Drop In features to the SmartThermostat, bringing it to parity with Echo devices and other Alexa-equipped speakers.

The new SmartThermostat is coming at an opportune time for Ecobee. With Google’s recent announcement that the Nest platform will no longer integrate with other smart home devices as extensively, Ecobee’s products might be more attractive to smart home enthusiasts or people who just don’t want to be trapped in Google’s ecosystem of products. In addition to working with Amazon’s Alexa, the SmartThermostat, like the Ecobee4, supports Apple’s HomeKit platform and Google Assistant, plus IFTTT and Samsung’s SmartThings, so it can integrate with most homes regardless of which voice assistant you prefer or platform you use.

Unlike Nest, the SmartThermostat works with Alexa, Siri, Google Assistant, IFTTT, and SmartThings

It also improves on many of the shortcomings of the Ecobee4, especially around its integrated Alexa features. If you already own an Ecobee3 or Ecobee4 and are thinking of upgrading, I’m not sure it’s worth it since the connected thermostat features are exactly the same and the “upgrades” are largely around the ancillary options. But if you’ve been eyeing a smart thermostat upgrade for your home and haven’t jumped on a prior Ecobee model or a Nest, the new SmartThermostat is an attractive option.