The rise and fall of iTunes, Apple’s most hated app

The digital hub that collapsed under its own weight

Share All sharing options for: The rise and fall of iTunes, Apple’s most hated app

It was a long run for iTunes, the jukebox software that revolutionized the music industry after its launch in 2001. But now, in the year 2019, it’s finally being put out of its misery — and ours.

With macOS 10.15 Catalina, the primary functions of iTunes will be spun out into separate Music, TV, and Podcasts apps, bringing an end to the program’s two decades of dominance within the Apple software and hardware ecosystem. Syncing your devices will now be handled by the Finder application, which can backup, update, or restore your device directly from its sidebar. (Though it’ll be gone on the Mac, iTunes will reportedly survive on Windows for the time being.)

iTunes was the interface to Apple’s Digital Hub strategy

Few will mourn the passing of the bloated mess that iTunes has become, but it was precisely this catch-all approach that made the software so compelling in the first place. iTunes was the interface to Apple’s Digital Hub strategy, which Steve Jobs unveiled back in 2001. It envisaged the Mac as the hub that sat at the center of everyone’s digital lives, linking together digital cameras, music players, and “handheld organizers.”

This became the driving philosophy behind iTunes, a piece of software that could contain all of your entertainment. iTunes got support for video in May 2005, Podcasts in June 2005, and Books in January 2010. Alongside its support for managing iPod music players, iTunes also became Apple’s companion software for the iPhone; up until iOS 5 you had to use iTunes to activate the phone, and it could also be used to install and manage apps.

As time went on, this approach morphed iTunes from a sleek jukebox and iPod companion into an overladen piece of software that cried out to be updated seemingly every time you tried to open it. Apple even admitted as much onstage during its WWDC keynote, joking that it considered adding calendar, web browsing, and email functionality to the application, before deciding to replace it entirely. 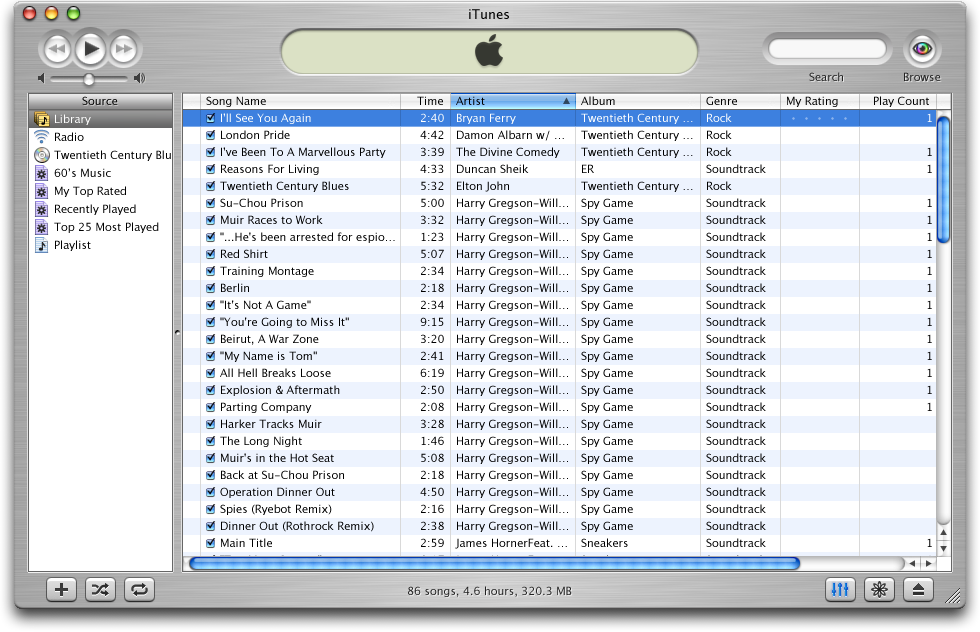 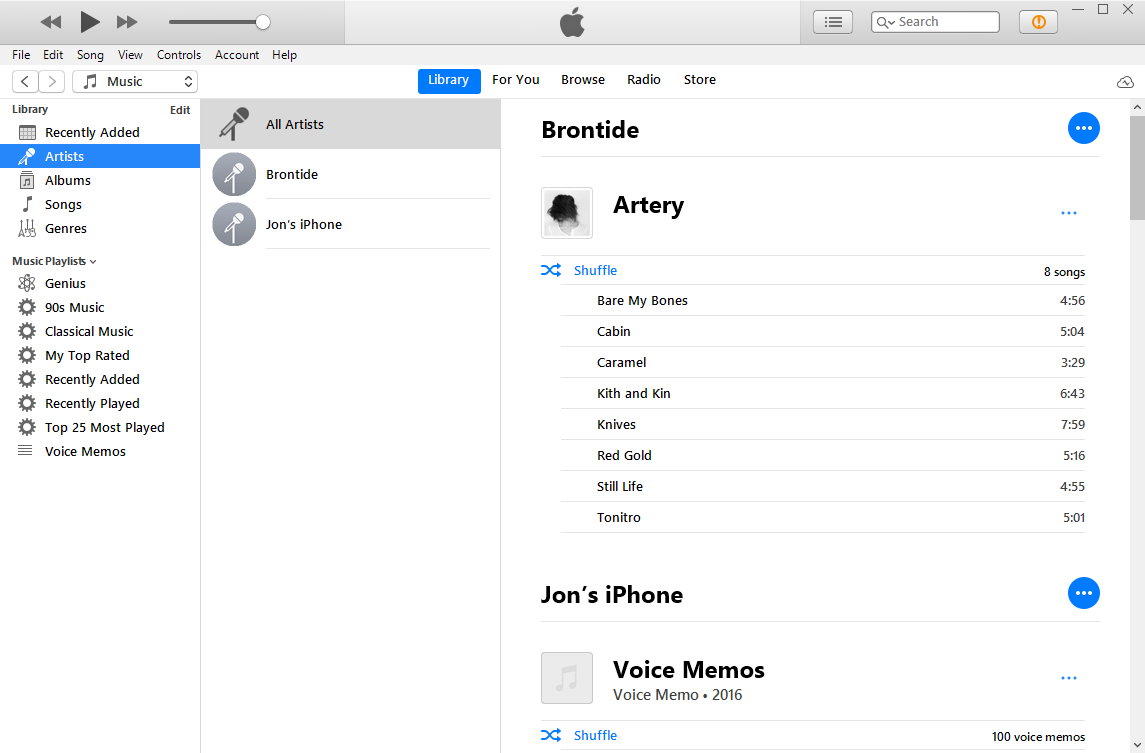 iTunes has changed a lot between its original reveal and today.
Screenshot: MacRumors and Screenshot by Jon Porter / The Verge

iTunes as a music playing software predates both the music store it became synonymous with and the iPod (when Apple announced the first version of iTunes, it advertised that it could be used to transfer music to “popular MP3 players from Rio and Creative Labs”), but it was the tight integration of these three pillars that made it such a formidable piece of software. You could buy a track for just 99 cents, rip some more from a CD, organize them into a playlist, and then quickly sync it to your iPod, all with the same piece of software. Apple knew that people could be tempted to pay money for digital music rather than pirating it if the process was convenient enough, and the success of the iTunes Store proves it was right.

iTunes’ early years were all about building a great digital jukebox for the iPod, paired with a music store filled with the biggest artists. The software initially launched on the Mac in January 2001, ahead of the release of the first iPod in October that year. It was joined by the launch of the iTunes Store in April 2003, with an initial catalog of just 200,000 songs. Only later did hell freeze over with the arrival of iTunes on Windows in October 2003, allowing non-Mac users, the vast majority of the computing world, to buy music from Apple and sync it to an iPod for the first time.

iTunes on Windows let the iPod enter the mainstream

Now that the software was available on the biggest operating system in the world, the iPod was able to turn from a Mac-specific accessory into a music player that pretty much anyone with a computer could own. Windows support meant that the device that could fit “1,000 songs in your pocket” could take off over the course of the decade, and as it did, its companion iTunes software took off, too.

iTunes became the blueprint for how people could legally download media, making it significantly easier to pay for music rather than steal it from early file-sharing sites like Napster. Thanks to the popularity of the iPod and iTunes ecosystem, Apple soon dominated digital downloads allowing it to set the terms — something the music industry came to resent. Apple’s focus on unbundled 99-cent tracks caused many artists and record labels to accuse Apple of stripping the value out of music. Total revenue for the music industry fell to $15 billion in 2012, at the height of digital sales, down from $20 billion in physical sales alone in 2003, according to the International Federation of the Phonographic Industry.

The advent of streaming (fueled in no small part by Apple’s own late entry), meant that the iTunes buy-to-own model was no longer the status quo, nor the music industry behemoth it once was. iTunes’ core competency — organizing and managing your music collection — was no longer necessary once everything you could ever want was being streamed from the cloud for a flat monthly rate. When iTunes first launched in 2001, Apple proudly touted its ability to rip, organize, play, and burn music. Now, the only organization necessary is to create a custom playlist or two on Spotify or Apple Music.

It’s not just that the music world moved on. iTunes’ catch-all approach hasn’t made sense for years, as its users have been better served by more specialized software and hardware. Video users have the Apple TV set-top box, as well as the recently redesigned Apple TV apps on iOS and Samsung smart TVs. Items like podcasts and books can be downloaded directly to a mobile device. iCloud removed the need for computer backups (though USB-backup functionality is likely to stick around for the foreseeable future), and iOS updates are now downloaded directly over the air.

It’s not that Apple’s “Digital Hub” disappeared, it just transitioned into the cloud. As iPods were replaced with iPhones, the home computer was no longer the center of the digital household. The Mac hasn’t quite turned into a glorified iPhone accessory just yet, but it’s no longer the favored child of Apple, which dropped “Computer” from its name in 2007 just as the iPod was peaking.

Even the iTunes name has long outlived its shelf life since the app ended up doing so much more than help you manage your “tunes.” Apple seems to have even grown tired of its iconic lowercase ‘i’ naming convention of late. It declined to call the Apple Watch the iWatch, and since then the company hasn’t returned to the naming convention for products like the Apple Pencil, the AirPods, or the HomePod.

The success of iTunes cannot be overstated; it outlived pretty much every other consumer-focused piece of software from its time (here’s to you, Winamp). Windows 10 users would search for iTunes so much in the Windows Store that Microsoft eventually convinced Apple to bring it to the store last year. Over the years, however, Apple’s original philosophy of providing a one-stop shop for all your media became iTunes’ greatest undoing by saddling the app with more and more baggage that’s eaten away at its usability. The world has moved on as ubiquitous connectivity, cloud storage, and streaming media became the norm. iTunes is still around as a legacy app for those who need it. But for everyone else, iTunes is now officially a thing of the past.