Share All sharing options for: Dell’s new business laptop logs you in hands-free

Update June 7, 2019, 12:12PM ET: This article has been updated to add information about when the proximity sensors are enabled.

It’s always been something of a pain to have to sign in to a work computer, but advancements like Windows Hello facial recognition, fingerprint scanning, and Apple’s Touch ID systems have made it slightly less painful in recent years. Now, Dell has an option that’s even easier. The Latitude 7400 2-in-1, a recently introduced business laptop, features a new ExpressSign-in feature that takes Microsoft’s Windows Hello facial recognition app one step further: it looks for your face and then automatically signs you in to the system even if it’s in sleep mode.

Aside from the trick new login system, the $1,599 ($2,802 as tested) Latitude is a fairly typical small business laptop. The 14-inch FHD (1920 x 1080) display is surrounded by a very narrow bezel, which, surprisingly, still contains enough space for an IR camera with an LED and a proximity sensor. The bezel also allows for well-designed hinges that allow the display to travel the 360-degree arc that makes this a 2-in-1 system. The display is reasonably good — certainly good enough for most business applications and casual video watching.

The screen knows you

The biggest draw is its use of Intel’s Context Sensing technology along with Microsoft’s Windows Hello facial recognition system. The idea is that the Latitude should recognize your face and start the computer without you having to do anything. You don’t even have to hit the keyboard to wake up the system.

When you look directly at the screen, the proximity sensor causes two LEDs on either side of the camera to strobe for a second or two, the screen goes on, and the Windows Hello eye icon on the screen looks back and forth while text tells you that it’s trying to recognize you. It usually takes under five seconds for the system to recognize you and tun on. 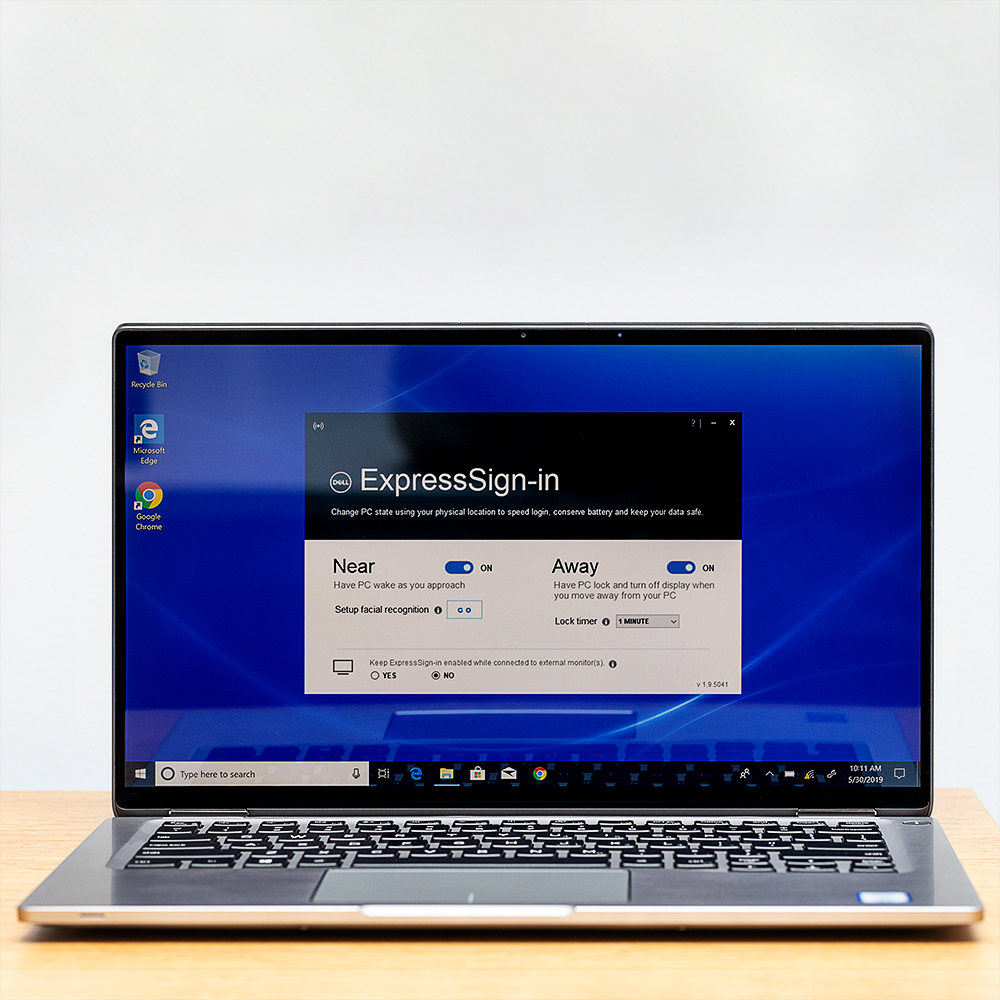 You can also set how long it will take for the PC to lock and turn off the display; you can time it for one, two, or three minutes.

Somewhat to my surprise, it works — mostly. When I first set it up (while wearing glasses), I wasn’t all that impressed with the results. The Latitude recognized me about 50 percent of the time, and twice, it couldn’t identify me at all. The second time it couldn’t make the identification, it suggested that I add another recognition session to help. (Just to make things interesting, this time, I went through the setup with my glasses off.)

After the second setup, things were much improved. The system quickly started up from sleep mode and signed me in most of the time when I sat in front of it and looked at the screen, whether or not I wore glasses. It wasn’t 100 percent predictable. Occasionally, I would stare directly into the dark screen, and nothing happened until I tapped on the keyboard. In addition, the proximity sensors are only enable when the Latitude is in laptop or “stand” modes, when the camera and sensors are above the display. They don’t work when the screen is in “tent mode” and the camera and sensors are below the screen.

When it does work, it’s rather cool. Once, it became a game. I was working at another computer with the Latitude 7400 sitting at the side of my desk, and when I saw it lock down out of the corner of my eye, I’d turn my head to glance at it and watch those two red LEDs flash and the system go live.

Is this something that you absolutely need? Not really. From what I can tell, it’s not hugely different than the Windows Hello systems on other PCs, just slightly more convenient. But it can save you a couple of seconds, and it adds a bit of high-tech fun to the working day.

The rest of the specs

At 12.59 x 7.87 x 0.34 inches, the Latitude is a nicely compact machine. In fact, because of its size, the weight of the computer — just under three pounds — is a little startling at first, perhaps because it is slightly heavier than many of the lightweight corporate systems that are touted today. This can be at least partly attributed to its 4-cell 78Wh battery, which has a claimed battery life up to 25 hours. While I didn’t do any formal battery tests, the Latitude did last comfortably through an active business day and stayed nicely cool.

There are enough ports to satisfy most business (and personal) needs. On the right side is an audio jack, SD card reader, optional SIM card slot, and a USB 3.1 port. The left side includes two Thunderbolt ports, an HDMI port, and a second USB 3.1 port; you can also get an optional smart card reader.

It is a good-looking system with a silver all-aluminum case. The backlit keyboard has more travel than most of the laptops I’ve worked with recently, and the typing experience was comfortable. I also appreciated the nice-sized touchpad. All that being said, I didn’t enjoy working with the system long-term because I found the somewhat sharp bottom edge of the notebook uncomfortable when it occasionally scraped against my wrist.

The Latitude is currently available in several different configurations, starting at $1,599 and going well over $2,000, depending on the options. It’s a solid, compact business system with a login system that saves time and trouble. While I wouldn’t buy this laptop solely for the ExpressSign-in tech, it is the kind of tech that can make things that much easier for you. Certainly, it feels a lot more efficient than typing in a password or even swiping a fingerprint sensor.

Right now, the Latitude 7400 2-in-1 is the only system using ExpressSign-in. With any luck, that tech will expand to future business and consumer laptops. In the meantime, it will give you something to show off to your seatmate on those long plane trips.