Sony’s best phone yet still isn’t worth the price

You can immediately see what Sony is going for with the new Xperia 1 just by looking at it. It’s so tall and unique that it’s obvious that Sony wanted to make it stand out from the pack of Android phones. In a world dominated by Samsung and Huawei, Sony needed to give people a specific, differentiating reason to consider its phones. The alternative at this point is, well, giving up on phones entirely — instead of just mostly.

There are enough benefits to the Xperia 1’s super tall form factor to actually make you consider it, weird as that may seem. It’s a big phone that doesn’t feel like a big phone. Sony’s pitch for the Xperia 1 is about it being more “cinematic.” Sony claims it has a cinematic screen, color reproduction, and camera. Those are the non-phone things that other divisions of Sony are good at, but the company has never really managed to translate those strengths to mobile.

Yes, the Xperia 1 stands out, but making a unique form factor is easy. Making a good, complete package is not. Credit where credit is due: Sony has done a better job of making a good high-end phone than it has in quite some time. But we shouldn’t grade on a curve here. The Xperia 1 doesn’t stand out in as many ways as it should — especially at a price of $950.

Our review of Sony Xperia 1 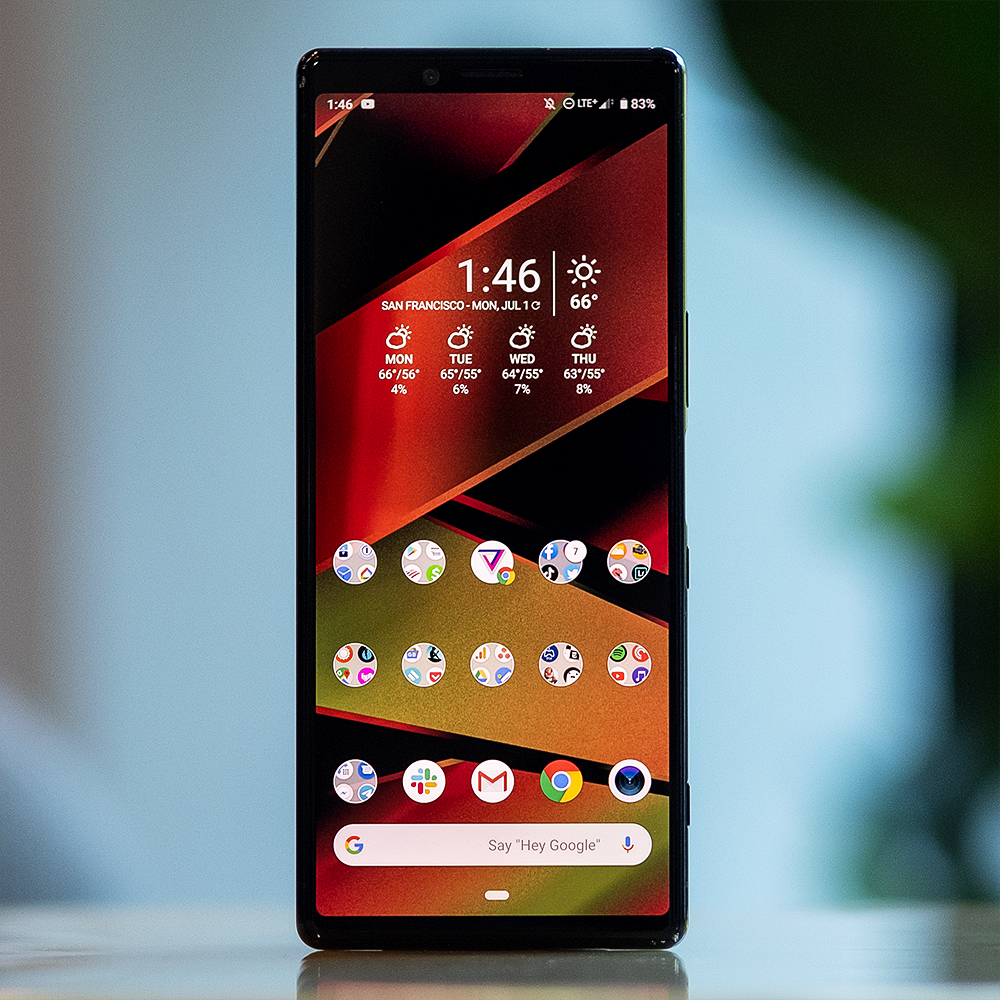 The best thing about the Xperia 1 is you get a bunch of the benefits of having a big-screened phone in a design that’s much easier to fit in your hand. The Xperia 1 has a 6.5-inch screen, which is huge even by 2019’s plus-sized phone standards. But because of the 21:9 aspect ratio, it’s significantly narrower than the competition. It’s almost precisely the same width as an iPhone XS.

I have waffled between wanting to use an XL phone and a smaller, one-handed phone for the past few years. Every time I grab a big phone, I love it — until the basic ergonomics of handling that slab of glass become annoying. Similarly, I love how comfortable small phones are — until everything starts to feel a little cramped.

The Xperia 1 very nearly gives us the best of both. I can see way more content on any app that has a list of things: email, Twitter, webpages. I can also comfortably hold the device in one hand and type with one thumb. If you’re the sort of person who wants split-screen apps on a phone, the Xperia 1 really is better for that experience.

But make no mistake: this is still a big-screened phone, and you will still need two hands to use it. The top of the screen is very far away from your thumb. It’s also not more pocketable than other big phones. In fact, it might be worse. It’s so tall that it didn’t sit in my front jeans pocket properly, and it slid right out when I was sitting down, clattering on the concrete. The metal corners were dinged; the Gorilla Glass, thankfully, survived.

It’s also awkward when it comes to buttons: they’re all on the right side, and there are a lot of them. There’s volume, a fingerprint sensor, a separate power button, and a camera button. (For whatever reason, I was hitting the wrong one all the time.) It’s odd that the fingerprint sensor and power button aren’t combined, and it’s even odder that it seems to so easily pick up just enough grime that it needs a quick wipe before it works. You can double press the power button to launch Google Assistant, which I like.

Sony says this is a 4K HDR OLED screen. The resolution here is 3840 x 1644, which is more of a phone version of 4K than a movie version where you usually get 2160 pixels on the short side. But since this is 21:9 and if you just count the pixels and yadda yadda yadda: fine, it’s 4K.

Similarly, Sony is touting HDR as a big deal, but I still think HDR on a phone is not something most people can really see. I’m more impressed by the color claims, which Sony calls “Creator Mode.” What it actually does is attempt to match the color reproduction from a reference monitor — with the DCI-P3 color gamut and the BT.2020 standard. Of course, it can’t actually match a reference monitor, but turning on Creator Mode made colors appear much more accurate but less vibrant than you might be used to on other phones.

You can also set that mode to only turn on in certain supported apps, like Netflix. Speaking of Netflix, movies from it really do seem like the ideal use case for this phone. Watching a widescreen movie is great: there’s good stereo separation, support for Dolby Atmos, and, best of all, no notch or camera cutout.

The thing is, the majority of video that I watch on my phone is not 21:9. It’s 4:3 on YouTube or, at best, 16:9. Whatever the aspect ratio, I end up having to choose between giant black bars on either side of the video or going full-screen and cutting off people’s heads. That’s a hassle, but this screen’s biggest problem will become obvious the moment you step outside: it doesn’t get nearly bright enough, especially compared to other OLEDs.

Sony has two software tricks to manage this plus-sized size. The first is double tapping the home button to shrink the whole interface down to a place where your thumb can reach. This is really well done; you can resize the shrunken-down version of Android to your liking.

The other software trick is called Side Sense, and it’s a huge pain. Like Samsung’s Edge Sense, Sony has added extra features you can access by interacting with the very edge of the screen. You can bring up a quick app launcher, pull down the notification shade, save split-screen app combos, and more. Side Sense doesn’t lack for options. Unlike Samsung, Sony has completely botched how you launch it.

In theory, the left and right rails around the screen are touch-sensitive, so you can tap or swipe on the edges of the screen to activate Side Sense features. In practice, I can never get Side Sense to actually work. It almost never pops up when I’m trying to use it and — even worse — it somehow manages to pop up when I am not trying to trigger it.

Here’s an enduring mystery of the smartphone world: nearly every phone with a camera that’s worth a damn uses Sony’s sensors, and yet Sony itself has a terrible reputation when it comes to image quality on its own phones. With the Xperia 1, I think Sony is getting closer to knocking that monkey off its back. The images it produces are respectable, though still not as good as what you’ll get out of a OnePlus 7 Pro or Pixel 3.

There are three 12-megapixel sensors: a regular, a wide, and a 2X telephoto. I wish the telephoto had a little more zoom, but the wide is as fun as I expected. It’s fun, but the phones are only middling image quality. You do have the option to leave the distortion in if you want to capture as much of a scene as possible and then straighten it out in post. The Xperia 1 borrows eye-tracking autofocus from Sony’s actual cameras, and it works well. You can see the little green box that lets you know on which person the camera is focused.

The camera is respectable, but not when you consider the price of the phone

I am not in love with Sony’s camera software. The special modes are a little gimmicky, and its attempts at portrait mode are slightly embarrassing. But the camera launches quickly and takes photos reliably, which is (sadly) more than you can say about the Pixel 3. I truly dislike the 8-megapixel selfie camera, which creates downright terrible photos and has some of the most overbearing beauty filters I’ve ever tried.

Overall, I’d say Sony’s aim with its image processing is to preserve detail, but that also seems to mean its photos are too noisy. That would make sense in a Pro mode with RAW output, but Sony’s manual mode doesn’t offer that. And Sony’s manual mode is the only way to get real HDR results, which is a bummer because the auto-HDR that’s available on other Android phones produces much more pleasing images by default compared to the Xperia 1.

There is one place where the Xperia 1 did surprise me: low light. It doesn’t have a dedicated night mode, but in auto when you shoot in the dark, it’ll default to spending more time gathering light and present you with solid results. It doesn’t do the night-into-daytime thing that Huawei and Google pull off, but sometimes, I find those night modes to be overbearing anyway.

Sony’s saving grace is that it has CineAlta Cinema Pro software for shooting 4K video in full manual mode, with really specific controls for key camera settings. Its interface is clear and easy to use, and even though it disables OIS, I think it would be a treat to use for cinematographers.

In terms of software and performance, I don’t have a ton of complaints. It runs a fairly clean version of Android 9 with just a few bells and whistles. One of those is a silly option to have the phone vibrate in sync with the sound. It is bad. Don’t use it.

Like every other modern Android phone, the Xperia 1 has a Snapdragon 855 processor. Combined with the clean build of Android, it makes for a fast phone. There’s 6GB of RAM and only one storage option of 128GB. I’m a little grumpy about the storage (especially at this price), but it’s easily expanded with a microSD card slot.

Battery life is average, at least when it comes to big phones. I’m getting over four hours of screen time, and it’s lasting through a day. But it’s only a 3,300mAh battery, and I kind of feel like that’s not enough. There’s no wireless charging, either. But Sony does do a neat thing: when you’re charging overnight, it won’t fast-charge, which should help the battery’s longevity over time. (The iPhone will begin doing the same thing starting with iOS 13.)

Xperia phones have historically been the clearest expression of the worst parts of Sony’s brand: overpriced, bad software, and designed for beauty over ergonomics. They’ve played on the things people love about Sony but failed to deliver those things.

When it comes to price, Sony’s gonna Sony

The Xperia 1 resolves those problems — mostly. The software is significantly improved, even with misses like Side Sense. The cameras use the branding and even some of the tech of its mirrorless cameras, but they aren’t the best you can get. Sony’s design is still great and, compared to other massive phones, much easier to hold in one hand. I really do like this form factor, and I’m glad Sony is giving it a shot.

That leaves the price. There, sadly, all I can say is: Sony’s gonna Sony. $950 is simply too much for a phone of this caliber. If the Xperia 1 cost a few hundred dollars less — the same as competing Android phones like the OnePlus 7 Pro — I’d be more enthusiastic about the progress Sony has made on its phones.

Instead, I’m just bummed. The Xperia 1 is a really nice phone, the kind that makes you think maybe Sony shouldn’t lower its ambitions in mobile. But for $950, I expect more. You should, too.