Fender Ten 5 review: all about that treble

And they’re amazing at it

Share All sharing options for: Fender Ten 5 review: all about that treble

Glorious guitar maker Fender got into the headphones business back in 2016 by acquiring Aurisonics, a small Tennessee company manufacturing in-ear monitors. In the time since, the portfolio of Fender earphones has grown to cover budgets from $99 to $1,799 and tastes as diverse as those of bassheads and treble-favoring audiophile purists. Today’s example is the $1,199.99 Fender Ten 5, which leans away from the bass emphasis of my favorite Fender product to date, the dark and rumbling FXA7, and toward a brighter and more accurate sound signature. It’s more money for a more precise and punctilious sound that should entice the pros and enthusiasts while still pleasing casual listeners as well.

After a month of testing the Ten 5s, I find myself surprised by just how much I enjoy their sound, even while I remain an avowed and unrepentant bass devotee.

Our review of Fender Ten 5 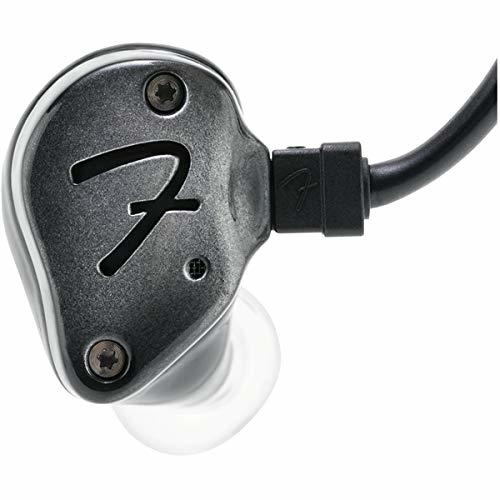 I’m well aware that, for most people, there are no circumstances in which spending more than $1,000 on earphones is a justifiable expense. And yet, you could say the same thing about Omega watches, Hermès sweaters, or one of Tesla’s fancier paint options. In all cases, the people who splurge on the extra luxury do it with the goal of obtaining something rare, exclusive, or just straight-up better than whatever else is on the market. How does Fender’s new pair of earphones fit into that paradigm?

Well, their sound reminds me of the $4,000 Focal Utopia. I’ve done a lot of reviews since the Utopia, and I’ve never written those words before. Fender’s Ten 5s have a level of detail, clarity, and naturalness to them that genuinely approaches the quality of Focal’s big and mighty over-ear headphones.

When listening to the drums in Kenji Kawai’s “Ghosthack” on the original Ghost in the Shell soundtrack with the Ten 5s, I can practically visualize how open the player’s palm is when hitting the drum’s leather. On the same album, there are a couple of tracks with chants where the vocals just claw at my soul. I mean that as a compliment. The music has emotive urgency but no sonic harshness. Fender has put the spotlight on vocals without overstepping into the eardrum stabbing that headphones with less refined, more shouty treble perform.

Vocals take center stage on the Ten 5s, and they’re rendered with emotive power and beauty

Bjork, the ultimate genre-straddling artist, also sounds amazing and engaging through the Ten 5s. Six minutes into Led Zeppelin’s “Since I’ve Been Loving You,” when the song reaches its crescendo and Robert Plant pushes his voice to its limits, I really feel his anguish.

As to digging out the finest detail from a recording, Nero’s My Eyes has some whispering, hissing voices in the background that get veiled or concealed on most other headphones, but I hear them on the Utopias and the Ten 5s. These little nuances aren’t strictly essential for enjoying the music, but they certainly enhance that enjoyment, even if it’s merely by providing the sense that you’re getting the full, unadulterated version of the song the artist recorded.

The Ten 5s have a sonic balance that, to my bass-loving ear, sounds treble-forward. They don’t offer a particularly relaxed listen, and they don’t hold back when singers hit the high notes in their music. And that’s the point of these earphones. There are tons of earbuds, costing a fraction of the price, for when you just want to pump background noise into your skull. The Ten 5s are tuned to make you feel the music, and they’re so damn pure, controlled, and emotive, that I can’t help but be sucked in by their performance.

Fender achieves high marks with almost every genre of music. The obvious weakness of the Ten 5s’ sound is bass-heavy hip-hop and electronica. Exactly the music that made me a little addicted to the Fender FXA7s’ sound in 2016 — Aphex Twin, Booka Shade, Clams Casino, Infected Mushroom, Nine Inch Nails, Two Fingers — just feels a little too light and airy with Fender’s newer and pricier model. No, I’m not about to recommend that you spend even more money to have a pair of each Fender model. Just be aware that if your musical tastes lean toward the more synthetic and darker realms, these are just not the buds for you. I like to listen at loud volumes, which is great with headphones with big bass, but it’s fatiguing when the treble is the part of the mix pushed to the foreground.

Fender’s Ten 5s distinguish themselves best when handling acoustic instruments and vocals, and the detail and airiness of their sound simply comes at the expense of earthshaking bass.

As to the matter of comfort and fit, Fender has a unique advantage over everyone else in its thermo-plastic elastomer tips. These soften with the warmth of your ear and grow more comfortable the longer you wear them. They also offer a great seal to insulate your music from exterior noise. Fender hasn’t much changed the basic exterior shell or these tips from its earliest models, and with good reason. I’d say this design is the closest you’ll get to the fit of custom-designed earphones without actually going to customs.

The one annoyance I have with the Ten 5s is their over-ear cable hook. It’s no worse than any others of that kind on the market, but I’m growing less tolerant of that design these days. In the age of the featherlight and totally wireless AirPods and Galaxy Buds making audio technology basically forgettable, I’m losing my enthusiasm to fiddle with wires, hooks, and seating my earbuds just right. On more than one occasion, I’ve opted to go out with a wireless pair of buds instead of the vastly superior Ten 5s just because I knew my windows for listening to music and radio would be limited or interrupted.

Fender ships the Ten 5s with a detachable, subtly color-coded, tangle-resistant wire, along with a truly heavy duty and enormous carrying case. One of those inclusions encourages the buds’ portable use while the other might help them survive a natural disaster but does nothing to help me use them on my commute. With their good noise isolation and light weight, I think the Fender Ten 5s can definitely serve as a luxurious pair of portable buds.

You’ll want to have a high-quality DAC to feed these on the move, such as on LG’s flagship G and V phone series or from the Hidizs Sonata HD dongle. But that’s just for the sake of quality, the power requirements of the Ten 5s are minimal. They derive their name from the single 10mm dynamic driver and the five balanced armature drivers inside each earbud, which is a lot of tiny speakers to help these earphones get super loud on demand.

A luxury in every sense of the word, these earphones don’t do enough to step out of the audiophile niche

The Fender Ten 5s are one of the most articulate pairs of earphones I’ve tested. They draw out details that most other headphones smudge up, and their technical performance is hard to fault. But do they make exemplary sonic performance more accessible physically or more affordable monetarily? It’s hard to argue that they do. And for something that costs as much as they do, Fender’s Ten 5s needed to have some of the enchanting sonic quality that thrilled me with the bassy FXA7s, but that’s exactly the thing I find them lacking.