The DJI Osmo Mobile 3 finally fits in your bag

Share All sharing options for: The DJI Osmo Mobile 3 finally fits in your bag

The DJI Osmo Mobile 3 is the third generation of the compact stabilization gimbal for a phone that allows you to shoot better video. The company has added a few new modes, updated the software in significant ways, and even improved the button layout. But the most important new feature is that it folds in half.

The Osmo Mobile 3 now folds and locks into a super small form factor that is much easier to stow. There are no latches or locks to do so, either; it just clicks up and down. The best part is that once you put your phone in, only the roll axis needs to be adjusted by sliding your phone from left to right. I can already tell that this is much less fiddly than the last generation, which could be a pain to balance.

DJI has kept the same layout of physical buttons while adding the trigger from the Osmo Mobile 1. These controls talk to the DJI Mimo app on your phone via Bluetooth 5.0. It’s super fast, and I haven’t had a connection problem in the couple of days I’ve been testing it.

It can automatically switch from landscape to portrait mode

One feature that might not seem like a big deal but actually matters a lot is the ability to quickly switch between portrait to landscape modes. You just double-tap on the M button on the gimbal, and it will automatically rotate the phone. This is a huge upgrade from the Mobile 2 that required manually switching the augmentation by unscrewing a latch on the gimbal.

This has the added benefit of leaving the bottom port of your phone open in both orientations. That means you can leave a charger or external mic plugged in when you’re shooting landscape, which is something the Mobile 2 couldn’t pull off. 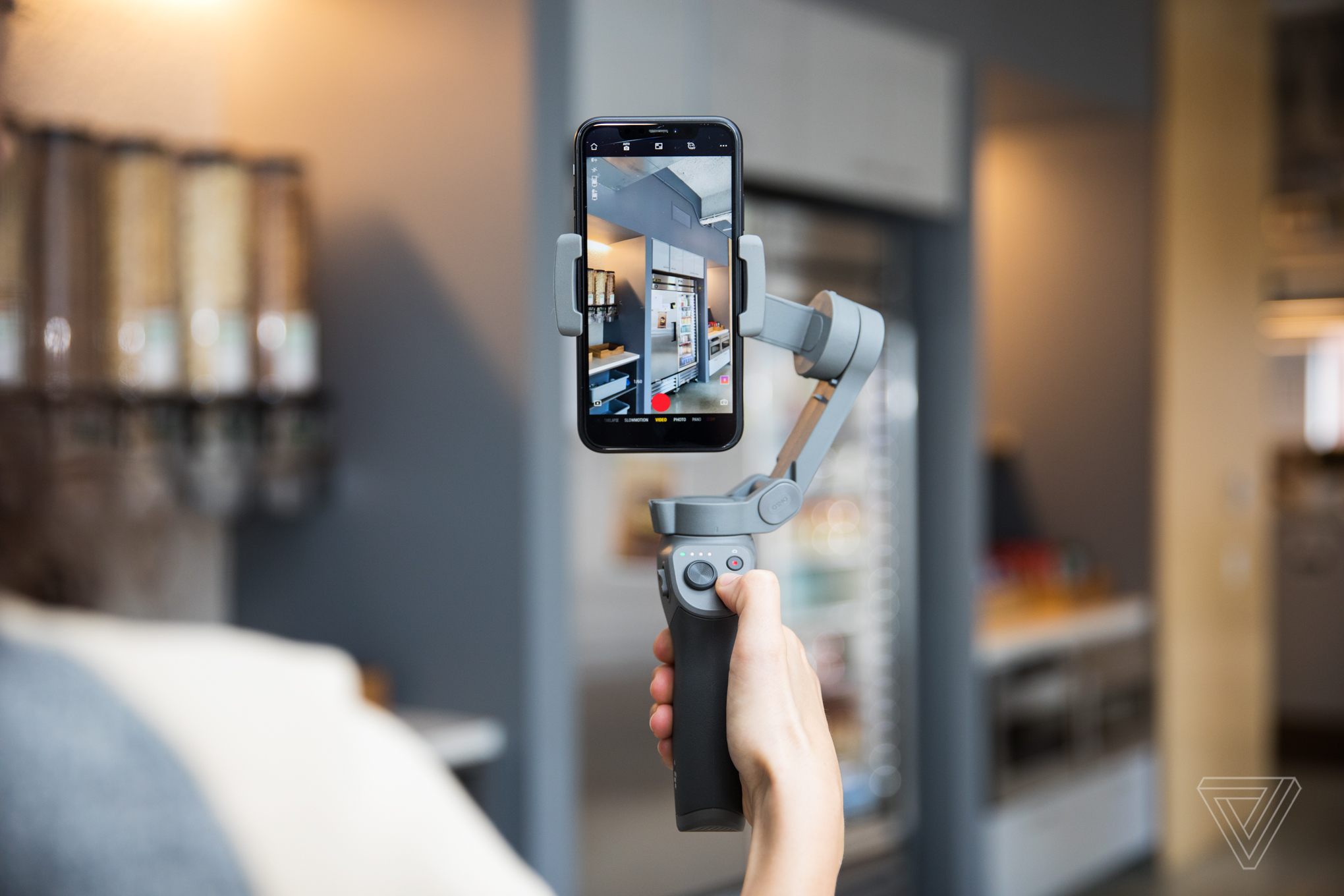 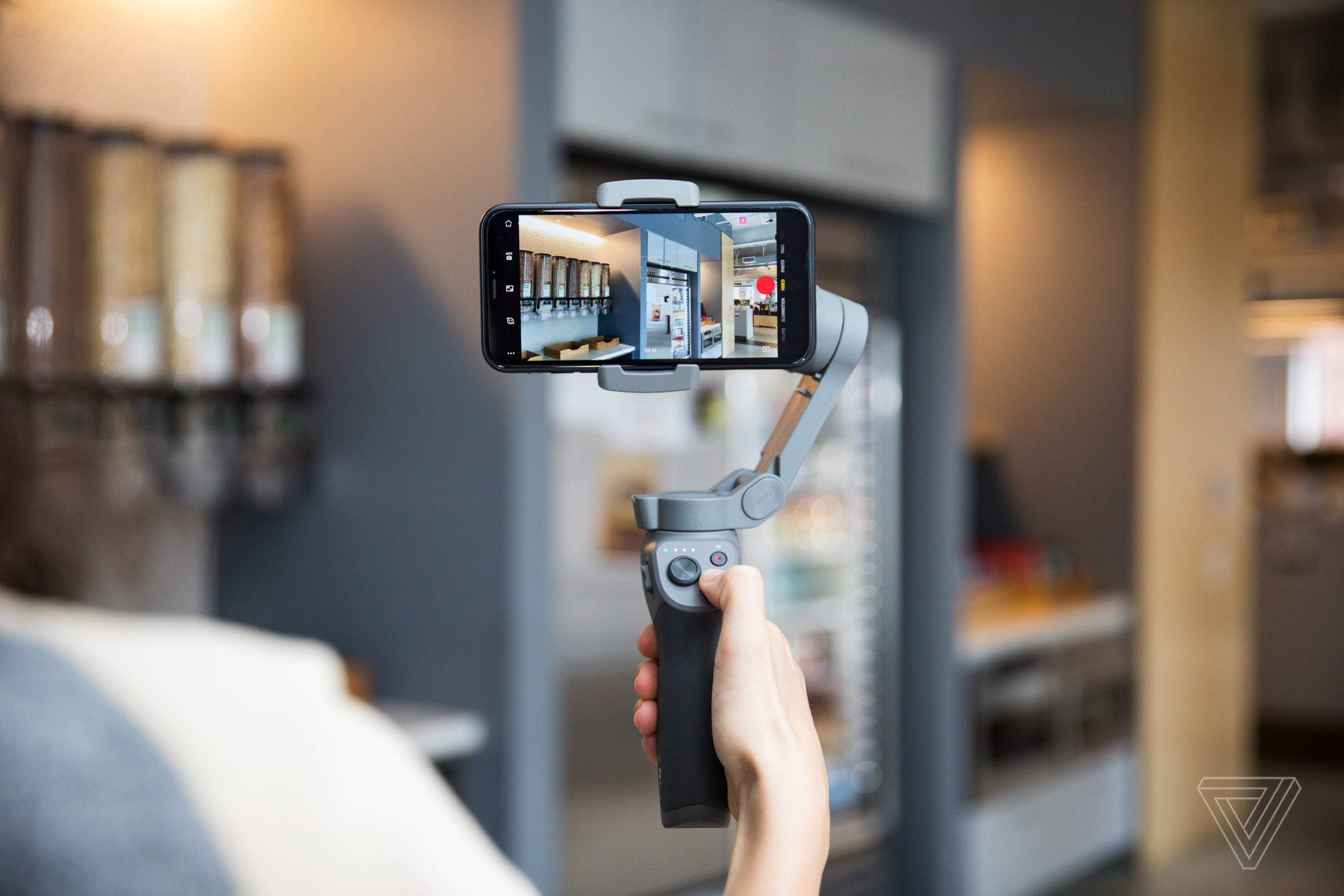 The grip is comfortable with more of an angle leading to the gimbal than in the previous models. DJI also added a sticky grip pad where your palm rests. At only 405g, the Osmo Mobile 3 is a little lighter than previous models, making it easier to hold for long periods of time.

While the hardware has been improved, a lot of the important changes come in the software, through DJI’s Mimo app. It now includes DJI’s computer vision-tracking software, Active Track 3.0, a Hyperlapse setting, and some creative shooting modes like “Fashion mode.”

Face tracking only works on people, and it’s a little buggy

There’s a gesture control feature that could work well if you’re shooting solo. When it sees you flash a peace sign, the app starts filming and enables Active Track 3.0. It flashes to let you know it found you and then again when it starts recording. Active Track 3.0 tracks a face and then moves the gimbal to keep that face in the frame. Unfortunately, it only works on people, and it can be buggy. Once it loses a face, it latches on to random things in the frame or the closest next human face it can find.

The Osmo Mobile 3 has a new “Sport Mode” that allows the gimbal to react much faster to the user’s movements. This is most beneficial when tracking a speedy subject such as a biker or ball being thrown. When running around with the Osmo Mobile 3 for a day, I almost never took it off Sport Mode. It just felt more responsive. But I also use gimbals weekly at The Verge and had the self-control to know you have to slow down to get smooth shots. If you’re not experienced with gimbals, it could be a little too quick to get a useable shot.

DJI claims the Mobile 3 charges from 0 to 100 percent in about 2.5 hours, with 15 hours of battery life on a full charge. It charges via USB-C.

The DJI Osmo Mobile 3 is already available. It starts at $119 for the standard version, which includes a wrist strap, storage pouch, and anti-slip pads. It’s $139 for all of that along with the Osmo Mobile Grip Tripod and the Osmo Mobile Carrying Case. If you are going to film yourself, the tripod mount is a must, and for only $20, it will save your arm from constantly having to hold the gimbal while it’s on.

The Osmo Mobile 3 is perfect for someone who wants to shoot really smooth footage with the camera that’s already in their pocket. Professionals will almost certainly be better off with one of the stabilizers DJI makes for bigger cameras (or one from one of DJI’s competitors). Still, Osmo has priced this gadget super aggressively to make it a possible impulse buy for anyone who spends a lot of time shooting video with their smartphone.