The Swift 7 is the lightest computer I’ve ever reviewed, but it makes many compromises to get there

Share All sharing options for: Acer Swift 7 review: thin at all costs

The Acer Swift 7 is the thinnest and lightest laptop I’ve ever reviewed. At 1.96 lbs (890 grams) and 0.39 inches (9.95mm), it beats out Apple’s recently departed 12-inch MacBook for portability. It’s even a full third of a pound lighter than an iPad Pro with Apple’s Smart Keyboard attached.

The Swift 7 also one-ups the MacBook with a 14-inch touchscreen display. This isn’t a tiny laptop for occasional use — it’s designed to be a primary computer for someone looking for the ultimate thin-and-light laptop.

On paper, the Swift 7 has everything else that would make it the ultimate thin-and-light: a dual-core Core i7 processor, 16GB of RAM, 512GB of NVMe storage, and two USB Type-C Thunderbolt 3 ports. In the box, Acer includes a thin pouch and a dongle that adds a USB-A port and HDMI. Despite its diminutive size, the Swift 7 is a lot of computer for its $1,699.99 price tag.

But it doesn’t take long living with the Swift 7 to learn it makes some significant compromises to enable its form factor.

Our review of Acer Swift 7 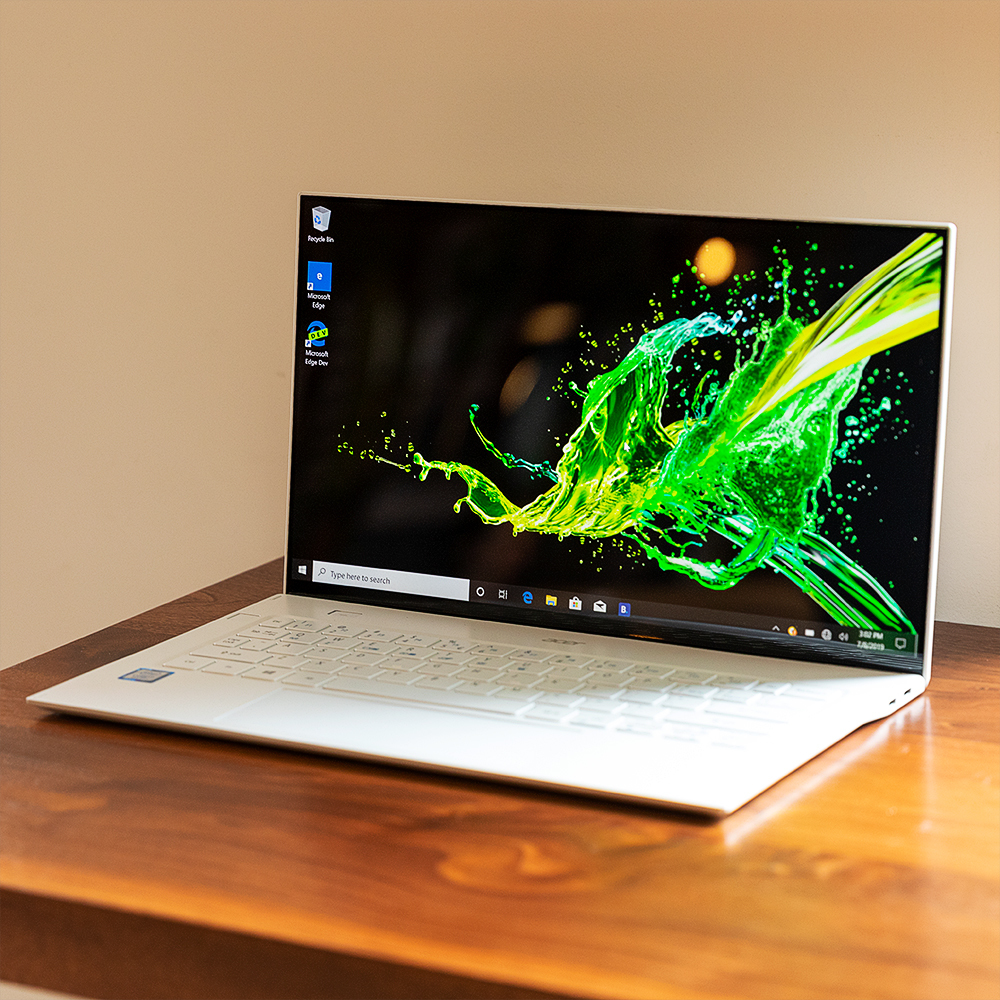 The Swift 7 is available in two colors, white or black, and I strongly prefer the white model. Unlike the black version, the white model doesn’t show any fingerprints or smudges and looks much cleaner as a result.

As you might expect from the specs I mentioned above, the Swift 7 is incredibly light to carry and very easy to transport from one place to another — so much so that I often didn’t even realize it was in my bag. But it also lacks the solid feel of other laptops, with more flex and flimsiness in its chassis than you’d expect or want from a laptop that costs this much. Acer insists that the magnesium-lithium and magnesium-aluminum alloys used in its construction “are lighter and stronger than aluminum alone at the same thickness,” but the experience of using the laptop doesn’t inspire much confidence that it can take a beating.

That feeling was amplified by my initial review device: the first Swift 7 I had in for review developed a screen flicker out of the blue, despite never having been dropped or mishandled. The replacement unit Acer sent me did not exhibit the same problem after a few weeks of use, but I’m still a little wary of carelessly tossing this laptop into my bag.

Aside from the issue I had with the first model, the Swift 7’s screen is impressive. It’s a large, 14-inch panel with the tiniest of bezels above and on the sides. It has 1080p resolution, which is plenty sharp at this size, and is rich and vibrant with good viewing angles.

The display is a touchscreen, but oddly, the panel is not very responsive. I frequently have to tap the screen twice for it to register my touches, especially if I’m not actively using the touchscreen to navigate. It’s almost like the touch controller goes to sleep and needs to be awakened before it will start responding.

The pop-up webcam is equally useless as it is clever

Around the screen is where you’ll find another feature that was compromised to make the Swift 7 as small as possible: there’s no webcam. Instead, Acer has hidden the camera in a pop-out module on the left side of the keyboard deck, combining the approaches of Dell’s older XPS 13 laptops and Huawei’s MateBook X Pro. The camera, unsurprisingly, provides a terrible experience, capturing either my fingers typing on the keyboard or the middle of my chest when on a call. It’s essentially useless for any practical purposes.

Since the camera can’t be used for facial login, Acer has built a fingerprint scanner into the power button, located just to the left of the keyboard. This worked fine in my tests, until a rogue Windows Update caused the computer to “forget” the fingerprint scanner existed at all. Rolling back the update and reinstalling it fixed the problem, but troubleshooting it did waste half a day.

The Swift 7’s keyboard is another example of compromise. In an effort to cram as many keys into the layout as possible, Acer made some unorthodox key placement decisions that I was unable to get accustomed to, even with weeks of use. The caps lock key is half size, the arrow keys are surrounded by home and end keys, and worst of all, the delete key is found right next to the backspace key, with no space between them. Needless to say, I constantly hit the delete key when I intended to hit backspace, and would land on the home and end keys instead of the arrow keys when I wanted to scroll or move the cursor around.

Aside from the layout issues, typing on the keyboard is fine, but it’s not the best I’ve ever used. The Swift 7’s keys have very little travel, as you’d expect, and they feel a bit mushy, but they are backlit and have adequate spacing between them.

Similarly, although the trackpad is weirdly wide, it tracks nicely and feels smooth under my fingers. But it has poor palm rejection, which, combined with its unusually wide shape, means the cursor jumps around a lot when I’m typing.

Inside, the Swift 7 is using a fanless 8th Gen Core i7 processor paired with 16GB of RAM. As we’ve seen in laptops with similar Y-Series chips, it’s not hard to find the limits of this processor, even with everyday productivity tasks like web browsing, email, Slack, and using Office. If you’re not a heavy multitasker, the processor is probably fine, but if you bounce between different tasks frequently, it won’t be hard to make the Swift 7 sweat.

The fanless design means the computer stays quiet, but it also means the deck gets rather warm, especially on the right side when the laptop is charging. (The charging ports are on the right side of the computer.) It’s not enough to burn my fingers or stop me from using it, but it’s definitely less comfortable to use than a more actively cooled computer.

Underneath the laptop are two small speakers, which sound about as good as you might expect them to. They are thin and squawky, and don’t provide much volume, not to mention any bass. You’ll definitely want to use a set of headphones more often than not.

Finally, the Swift 7 has merely average battery life, hitting just under six hours between charges in my real-world usage tests. I don’t typically expect much more from a laptop this thin, but it does mean that you can’t really rely on it to last a whole day of work, and you might have issues using it for a full cross-country flight. Exacerbating the matter is the pickiness of the USB-C ports: the Swift 7 did not like powering up with any other charger than the one it came with. Even if I used a USB-C cable and charger that were rated for well above the 45W of the stock charger, the Swift 7 would refuse to accept a charge. That means that even though the Swift 7 is extremely light, you’ll also be carrying its power brick around with you everywhere since it won’t reliably charge off of a USB-C battery or other adapter.

The goal of the Swift 7 is noble: make a standard clamshell laptop as thin and light as possible in order to make it as portable as it can be. As a regular commuter, it’s something I’d typically appreciate — anything that makes my backpack or shoulder bag lighter makes me happier. But the number of compromises the Swift 7 has to make to hit its level of thinness and lightness are just too much for me. I’d rather put up with an extra half pound of weight and quarter inch of thickness for a better keyboard, better performance, more reliable build quality, and a usable webcam.