So many opportunities for improvement, too few taken

There’s something slightly unusual about the Origin EVO 16-S: it has a 16-inch screen. That’s a peculiar size for a gaming laptop, or any kind of laptop for that matter (though it may not be an anomaly for long.) Origin has, in effect, stuffed a bigger screen into its lightly tweaked 15-inch EVO 15-S chassis, which debuted last year.

Despite the increase in screen size, using the EVO 16-S felt no different than using any other standard-sized gaming laptop during the few weeks that I spent with it. In fact, this laptop is virtually identical to last year’s EVO 15-S, aside from one USB 3.0 port and two Mini DisplayPorts that were dropped from the current model. 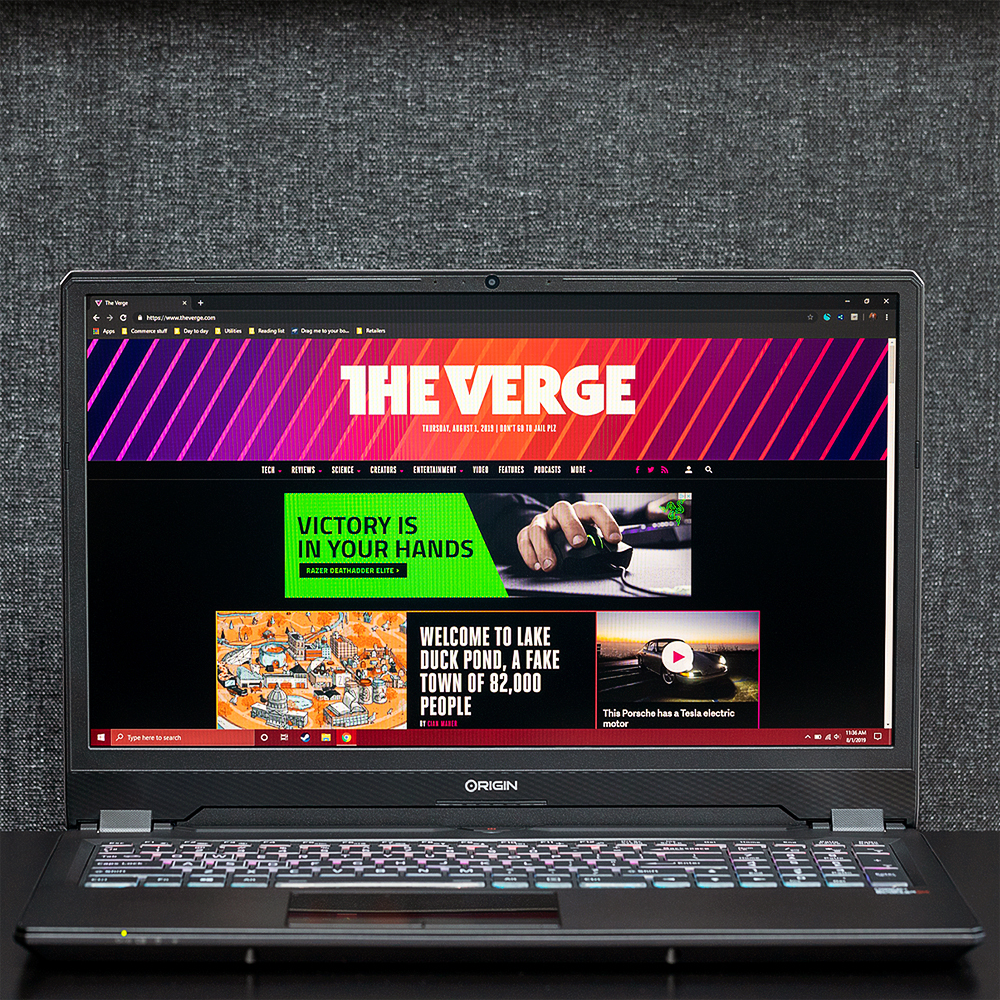 The configuration that Origin put together for The Verge costs $2,751, and this includes a custom paint job that costs $149. (Of course, I had to take Origin up on its offer to paint a Verge wallpaper onto the laptop’s lid.) It’s a thin, light laptop with the latest components, like a 9th Gen Intel Core i7 and Nvidia’s Max-Q variant of the RTX 2080 (underclocked compared to the standard version, but still powerful).

Update, 1:57PM ET, August 21st: Updated the correctly reflect the price of this configuration. I apologize for the error.

The EVO 16-S’s creaky hinges and flimsy, plastic lid make for an iffy first impression. If you’re expecting bold, industrial design with equal attention paid to every physical component, you won’t get your fix here.

And while I appreciate the trimmed-down bezels surrounding the 16-inch display, the screen itself is no great shakes. The 1080p IPS display features a 144Hz refresh rate, which is great to have if you value a smooth scroll online and want games to run more fluidly. However, there’s still no Nvidia G-Sync support, which would have eliminated some of the screen tearing that I noticed during my time spent gaming with this laptop. It’s a repeat omission that doesn’t make sense for a laptop at this price, aimed at a crowd who cares about features like these.

More laptops are getting Thunderbolt 3 ports, which allow for super fast data transfers. That’s still missing here, despite having a pair of USB-C ports. Few people may have an actual use for Thunderbolt 3 ports, but that’s beside my point: Razer’s entry-level Blade Stealth, a laptop that you can find for $1,199, supports Thunderbolt 3, and it allows for some cool tricks other than fast data speeds. It can get a huge boost to its graphics capabilities with the Razer Core X Chroma external GPU enclosure that connects over Thunderbolt 3.

There is an improvement from last year’s EVO 15-S: these USB-C ports can fast charge devices that support it. My Pixel 3 charged quickly, and my Nintendo Switch was able to stow away some juice while I played Fire Emblem: Three Houses.

I’ve saved my biggest qualm for last: this laptop loses most of its gaming capabilities when you’re playing on the battery’s power. If you’re someone who likes to play games in transit, get ready to be surprised by sub-20 fps gameplay. Most games that I want to play, including Outer Wilds or Metro: Exodus, a knee-buckler of a game with demanding ray tracing effects, are simply unplayable when the EVO 16-S isn’t plugged in. What’s worse is that tweaking graphical settings doesn’t make things much better.

This is a feature, not a bug, according to Origin PC. The company told me that this behavior is intentional, and designed to prevent overheating and to keep the battery from draining too quickly. Those are definitely valid issues. Most gaming laptops get properly toasty and last under an hour while gaming away from the plug, but at least those let you game with all of the power that they’re capable of, unlike this one.

In fact, Origin’s mission to keep the machine cool and alive for longer on the battery is mostly a success, gaming performance be darned. It lasts around two hours with my usual workload running (around 10 Chrome tabs, Spotify, Affinity Photo, and Slack), and the fans stay relatively quiet, though it inexplicably ramped up the fans a few times.

By adjusting the laptop to a less demanding power setting, Origin claims up to seven hours of battery life. Testing those claims was made difficult because when I switched into “Quiet” mode, the most efficient setting available, the mouse pointer hitched, and the display could no longer quickly refresh. So if you’re buying with battery life in mind, you shouldn’t be looking at this machine. Instead, direct your attention toward our guide on the best laptops, which features more well-rounded machines.

Last year’s EVO 15-S was close to being great, only stunted by a few small, but important omissions that no gaming laptop over $1,500 should ship without. And now, a year later, Origin didn’t put enough work in to make this one measurably better. It is one of the first machines to have a 16-inch screen, and it has the spec upgrades that you’d expect, but it lacks far too much for that feat to be worth celebrating.

For this kind of money, and against competition like the feature-packed Razer Blade 15 Advanced or the delightfully innovative Acer Predator Triton 900 with its versatile floating display, the Origin’s slightly bigger screen isn’t nearly enough to win me over, or make all of this machine’s flaws go away. What’s worse is that most of these issues are repeat offenders from Origin’s EVO 15-S.

In the time since I received a review unit, Origin PC was acquired by Corsair. Now I can’t stop thinking about the kind of impact this might have on how Origin sources its laptop designs. Currently, Origin sources its laptop designs from an original design manufacturer (ODM), but I’d love to see what could happen if chassis design was done internally. Corsair’s ownership of Origin PC may not have any impact on product design, but if the EVO 16-S is any example, it would be better for everyone if that happened.