It doesn’t switch, but that won’t matter for everyone

Ever since it entered the world of video games, a few things about Nintendo have remained consistent. Perhaps the most enduring is that the company knows how to make a great portable gaming experience. From the groundbreaking Game & Watch to the original Game Boy brick to the strangely enticing dual-screened DS, Nintendo has always made hardware you want to hold in your hands and play with. It’s a company that understands gaming on the go.

In 2017, it took that idea in a different direction with the Switch, which blurred the line between a traditional handheld and a home gaming console. It was a tablet you could play wherever you wanted but also slide into a dock to play games on your television. There was no division between console games and portable games. There were just games. For many people, myself included, this allowed them to play games on their own terms, wherever and whenever they were able. Considering how demanding a hobby this can be, it was a freeing notion.

Now things have come full circle with the $199 Switch Lite, which hits stores starting on September 20th. It’s a smaller and cheaper version of the device that cuts out a core feature: you can’t hook up a Switch Lite to your TV. It’s designed exclusively for playing in handheld mode. With the original Switch, Nintendo proved that games didn’t have to be designed around hardware, and that with the right device, you could enjoy the same game in a variety of places and situations. With the Switch Lite, the company has proved something very different: it can still build one hell of a handheld.

Our review of Nintendo Switch Lite 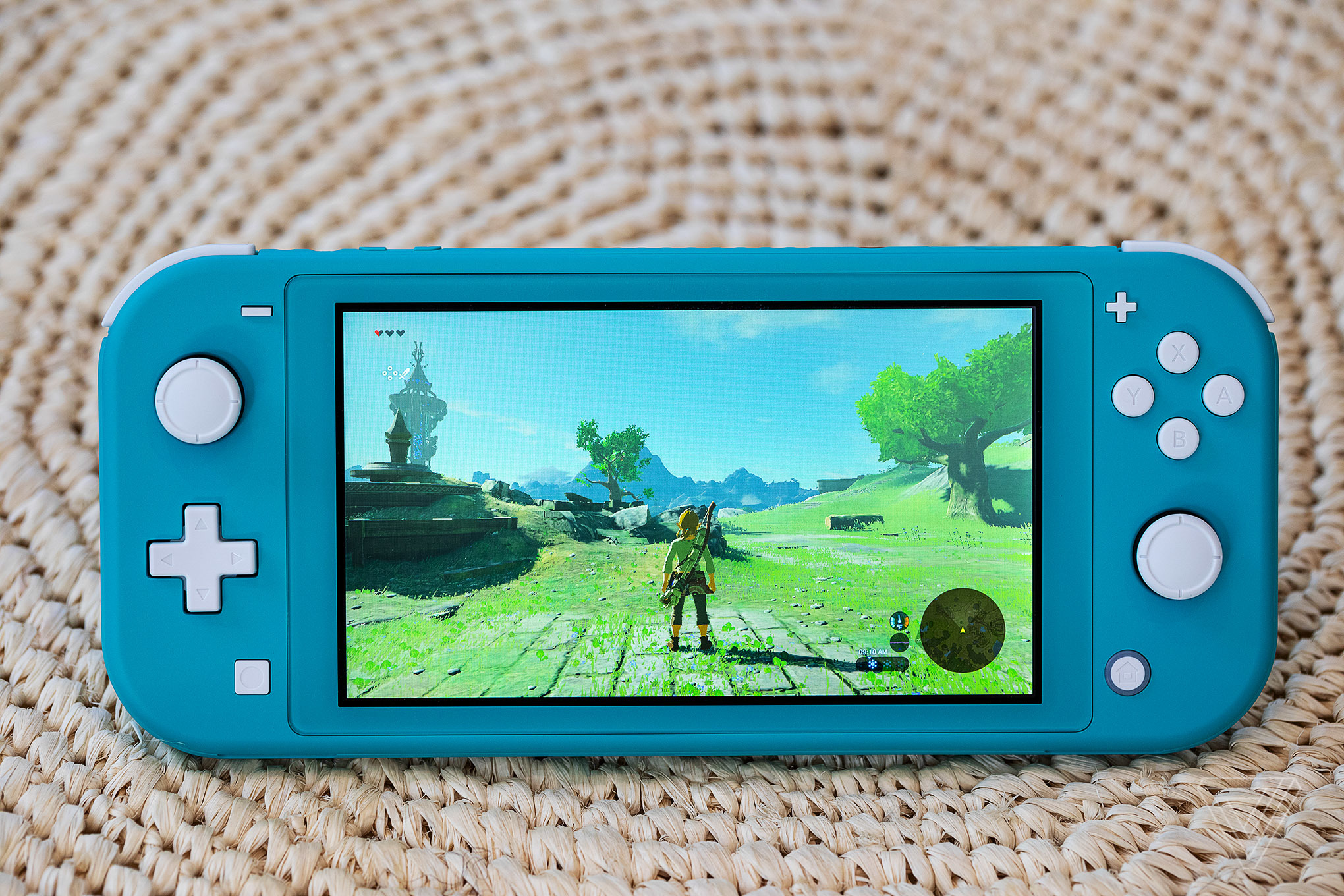 At its most basic, the Switch Lite really is just a smaller Switch. It has a 5.5-inch touchscreen, compared to the original’s 6.2-inch display, and it’s overall much tinier. The Switch Lite clocks in at 3.6 inches high, 8.2 inches long, and 0.55 inches deep. It’s extremely light, at a minuscule 0.61 pounds, so it’s a lot easier on your arms if you want to play some Zelda in bed. The controller layout is largely the same, and it has the same slots for game cards and a microSD card. And yes, there’s a headphone jack. (Though, if you thought the lack of detachable controllers would mean Bluetooth headphone support, you’re out of luck). It also runs the exact same, fairly basic operating system as the base Switch, and Nintendo says it has three to seven hours of battery life. That’s proved largely true during my time with it so far. I tested a lot of different kinds of games and generally had to recharge every four or five hours.

There are obvious things about the Switch Lite that are demonstrably worse than its predecessor. In order to get that smaller size and price point, Nintendo had to cut out key features, most notably the detachable controls, built-in rumble, and the ability to connect to a television set. But what remains is, in many ways, an improvement on the original.

To use the Nintendo Switch Lite, as well as the original Switch, there’s one mandatory thing you need to agree to:

Aside from the scaling down, the biggest change is the controls. Whereas the original Switch had detachable Joy-Con controllers, on the Lite, they’re built right in. This means a few things. One, you can’t play any games that require detached Joy-Con controllers, like the fighting game Arms or the Labo line of DIY cardboard contraptions, out of the box. You’ll need to pick up a separate set of Joy-Con to do that. But it also means the Switch Lite is a much sturdier, more streamlined device. As an all-in-one unit, it’s solid, making it much better for kids or people who travel a lot. You don’t feel the controls shift and move the way you do with a normal Switch. It’s the kind of thing you can toss in a messenger bag and not worry about.

It also looks much better. The Switch Lite comes in three colors — gray, yellow, and teal — and the entire unit, bezel included, is a uniform shade, so you don’t get the ugly black border of the original Switch. It’s just a much cleaner look, and the Switch Lite’s matte plastic body is also more grippy and comfortable, and less prone to smears from sweaty hands.

The screen is nearly identical to the original, aside from being smaller, yet it, too, feels like an improvement. It’s not as big, sure, and it’s the same resolution as the original Switch. But by shrinking things down slightly, the Lite’s display actually makes games appear sharper and clearer. (It’s an effect longtime Nintendo fans will remember from the impossibly small Game Boy Micro.) I tested around 20 different games, and I couldn’t find anywhere they either looked worse or were unplayable because of the smaller display. Even text-heavy games like Fire Emblem: Three Houses, which has fairly small in-game text, are perfectly playable on the Lite.

The controls are also a step up due in large part to the inclusion of a proper directional pad. The original Switch featured directional buttons, which were disconnected from each other and made playing classic games — an increasingly attractive feature of the Switch — somewhat of a pain. But the new D-pad is responsive and comfortable. I tried it with a range of games, including Celeste, Super Mario Maker 2, Super Mario World, and the Mega Man Legacy Collection, and it just felt right. I’m still terrible at Mega Man 2, but at least now it’s my fault for missing a jump, not the controls’.

I’m not sure if it’s that the smaller size makes the controls more accessible, but I actually found that most games I played were more comfortable on the Lite. I was hitting more shots in Fortnite and getting higher scores in Sayonara Wild Hearts than I did on the regular Switch. It’s anecdotal, sure, but I can definitely say that no games felt worse on a Switch Lite, but plenty felt a lot better.

The exception, of course, is any game that requires detached Joy-Con controllers. It’s very easy to connect additional Joy-Con or other accessories like the Pokéball Plus to the Lite — it works the same way as a standard Switch — and I had no issues with the tablet correctly reading my motion-controlled inputs. The problem is that it’s awkward. The Lite doesn’t have a kickstand or any way to hold it up, so you’re forced to either lay it down on a flat surface or jury-rig a way for it to stand in order to play. Neither option works well, and it’s not much fun crowding around the small screen, resting flat on a table, for an impromptu Mario Kart tournament. On the plus side, there are few Switch games that actually require you to detach the controllers, so this might not be an issue for some users.

The Switch Lite sits in a strange position

The question, really, is who is the Switch Lite for? It sits in a strange position. It’s both better and worse than its predecessor. It’s an improvement in some ways, with a crisper display and more solid design. At the same time, it loses some of the key functionality that made the Switch such a hit in the first place, and it’s priced as a more budget-friendly alternative.

If you already own a Switch and love it, the Lite isn’t a necessary upgrade, unless you’re absolutely dying for a proper D-pad. (Even then, you have other options.) The improvements are welcome, but not drastic enough to warrant getting a whole new device. The Switch Lite is for people who are sitting on the proverbial fence: someone who liked the idea of Nintendo’s tablet but couldn’t quite stomach a $300 price tag and who didn’t really want to play games on a TV anyway. The kind of person who just wants a machine for playing Breath of the Wild on a plane or a kid who needs the latest Pokémon to fill those quiet summer afternoons. If the cut features don’t feel necessary to you, the Switch Lite will likely be a good option.

If you are that kind of person, you’ll be grabbing a device that fits snugly into Nintendo’s storied history with handheld gaming. In a world where everyone has a smartphone in their pocket and services like Apple Arcade make playing great games easier than ever, there’s still a place for a dedicated device that does one specific thing. And the Switch Lite does that one thing very well.