It has a built-in laser, Alexa support, and more

Share All sharing options for: Petcube’s Play 2 camera makes it a little easier to be away from your pets

I am obsessed with my two cats, so much that I always feel the need to check in on them when we’re away. They’re both perfectly capable of taking care of themselves, and they’re usually just sleeping in the same place whether I’m watching them or not. But sometimes, I just want to watch them being cute. And if I can use a camera to make sure they don’t combust, or destroy everything, I can be at peace.

Petcube’s Play 2 pet camera seems like the perfect gadget for me, and if you’re a pet owner, it delivers more than your average home security camera. First off, it’s skilled at detecting cats or dogs when they enter the camera’s 180-degree field of view. Once this happens, you’ll get a notification to check out the action, and the camera records up to 30 seconds of footage and puts it on your Petcube app timeline. If the notifications become too much to bear (they probably will), you can change the criteria for recording to start only when the camera sees movement from a pet, and hears a meow or bark — a new feature in the Play 2.

This camera also has a wider field of view than its predecessor, so it can see more of your home. The Play 2 can work on 2.4GHz and 5GHz Wi-Fi signals, an improvement over the first-generation Play that was limited to 2.4GHz connections. This model has Alexa support, which essentially turns it into an Echo Dot-like smart speaker. By opting in with Amazon, the camera’s microphone switches to always-on by default, awaiting for the “Hey Alexa” wake word, though you can switch the microphone off through the settings.

The Play 2’s four-microphone array is good at hearing you call out to it, but the sound quality of its speaker isn’t great, so I don’t suggest relying on it as your only vessel for music. Alexa support is limited compared to what Amazon’s Echo devices are capable of; the Play 2 can’t send messages, call other people, or queue up music on Spotify. However, it’s nice to easily be able to check the weather, or ask Alexa a question.

Our review of Petcube Play 2 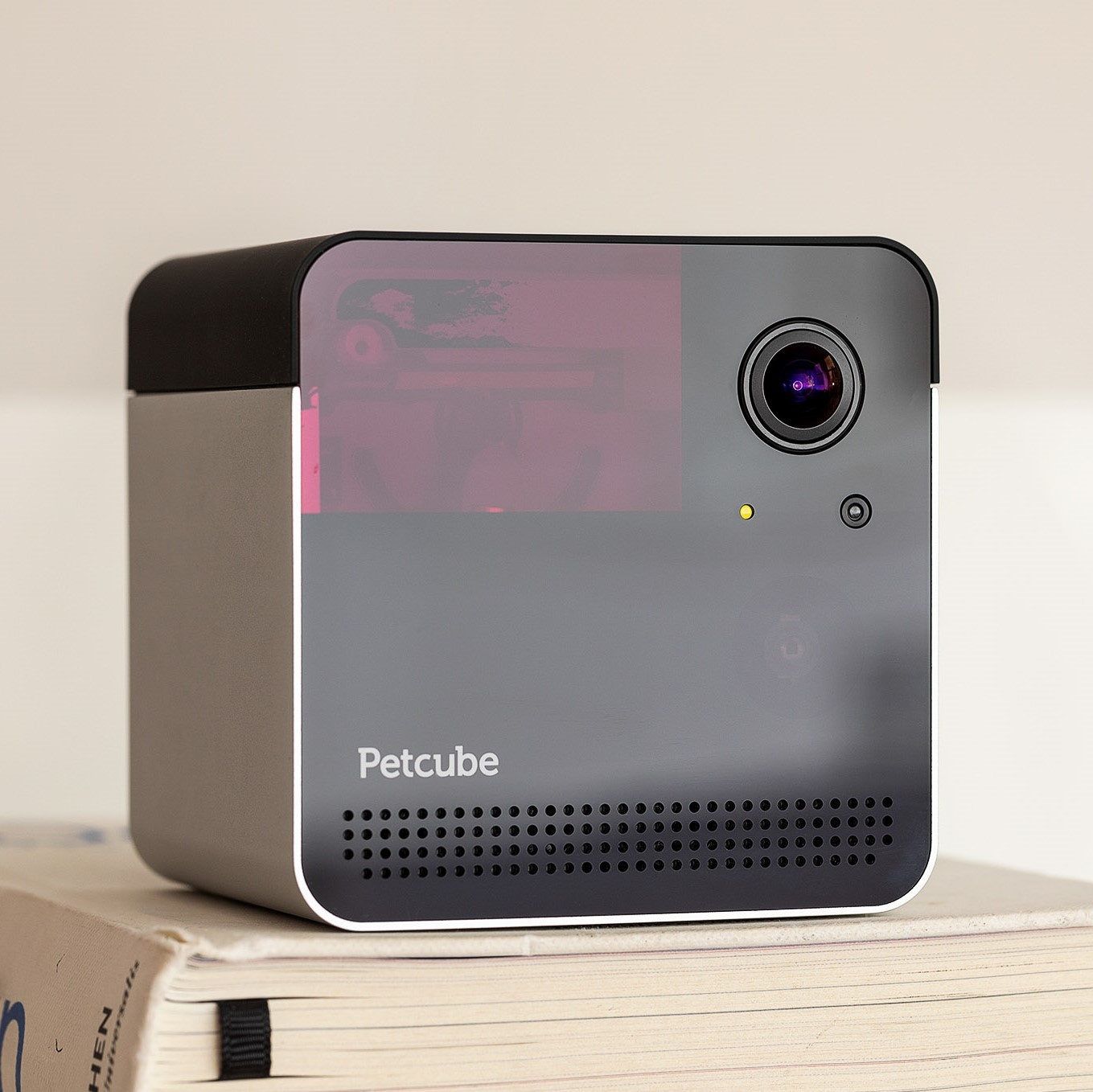 But the thing I think most people (and their pets) will enjoy is the Play 2’s built-in laser pointer. Like a few of Petcube’s previous pet cameras, it’s the star of the package. You can either command it around your home via the app, or just let the Petcube take the wheel and automatically shoot the laser periodically (up to three times per hour) to get your pets moving.

If your pet enjoys following a laser, like my cats do, they’ll love this. But I have a few gripes about it. Compared to a cheap laser pointer, the laser inside of the Play 2 is dim. It’s a Class 2 laser, so it won’t injure you or your pet by looking at it briefly. That’s probably a smart move, but it results in a pointer that can be tough for my cats to find when a lot of natural light pours in through our windows. Also, the laser doesn’t move smoothly across surfaces, nor does it accurately point at the spot where you’re tapping on the screen, even after spending 10 minutes calibrating it. Still, my cats were very entertained by the Play 2’s laser, and that’s the whole point.

I went on a week-long vacation recently and relied on this Petcube camera to record my cats and keep them entertained. Set up with a premium paid subscription courtesy of Petcube, I like how it notified me when it saw a pet, and I could click into it to see what’s going on. Though, the endless wave of notifications coming in from the Play 2 can be annoying — especially at night. Petcube’s app does have a few knobs and sliders that let you adjust the threshold of activity before it starts to record. You can also customize what sort of activity will trigger a notification. For instance, you set the camera to record only when it hears a sound and sees some movement. That definitely helps to cull the frequency of notifications.

If that’s not enough control for you, it offers two modes that you can switch between: Sleep and Awake. This is akin to an on / off switch for the Play 2: Awake sees the Play 2 camera operating as normal, full speed ahead on the notifications. Sleep mode turns off essentially all of the camera’s smart functionality, and it won’t alert you to anything, nor will it save videos to your timeline.

To use the Petcube Play 2, you’ll have to agree to two things:

If you plan to use the optional Amazon Alexa voice feature, you’ll need to have an Amazon account. And by signing into it and allowing this connection to take place in the Petcube app, you also agree to Amazon’s conditions of use and privacy notice.

For a smart camera, this is a not-so-smart solution to reducing notifications — I’d have preferred Petcube to implement a scheduling tool that turns off notifications at a certain time, and reactivate them when I wake up.

Almost all of the Play 2’s unique features don’t require a subscription. That’s good because this camera costs $199, which isn’t cheap. However, without a paid subscription, its intelligent capabilities are limited. The app stores only the past four hours’ worth of video highlights in the form of 10-second clips instead of 30, and you can’t tweak its smart filter to only alert you to specific kinds of noises or objects.

Petcube offers two options: “optimal” for $5.99 per month or $47.88 per year, and “premium” for $14.99 per month or $99 per year. The major upgrades that a high-tier subscription will net you over the optimal plan is a warranty extension from one year to two, 90 days of video history (compared to just three), and the ability to save as many of the recorded videos as you please (optimal allows only 10 video downloads per month, which seems harsh). Both plans make you eligible for up to $500 of savings on pet-related goods and services from the likes of Rover.com, Wag, Pet Acoustics, Max-Bone, and more.

If you’re in the market for a smart camera to keep an eye on your pets, the Play 2 is a good choice. It may not make sense for some to spend $199 on a single camera, as well as a subscription when that much could get you several Wyze Cams, for instance. But Petcube’s unique features mostly make up for the added cost, and it makes leaving my cats behind a little less painful.