Jabra’s Elite 65t earbuds have been a worthy rival to Apple’s original AirPods and the go-to alternative for people with an Android phone or whose ears didn’t accommodate the one-size-fits-most AirPod design ever since their release. But Jabra took a long time delivering a follow-up, and in that time, we’ve seen pretty much every consumer tech company take a swing (or two) at true wireless earbuds.

Now, Jabra has finally delivered an update in the $179.99 Elite 75t earbuds. With a new design, better battery life, and noticeably improved sound quality, there’s a lot to like about them. Even against a bigger field of competitors than ever before, the company stands out for getting so many things right.

Our review of Jabra Elite 75t 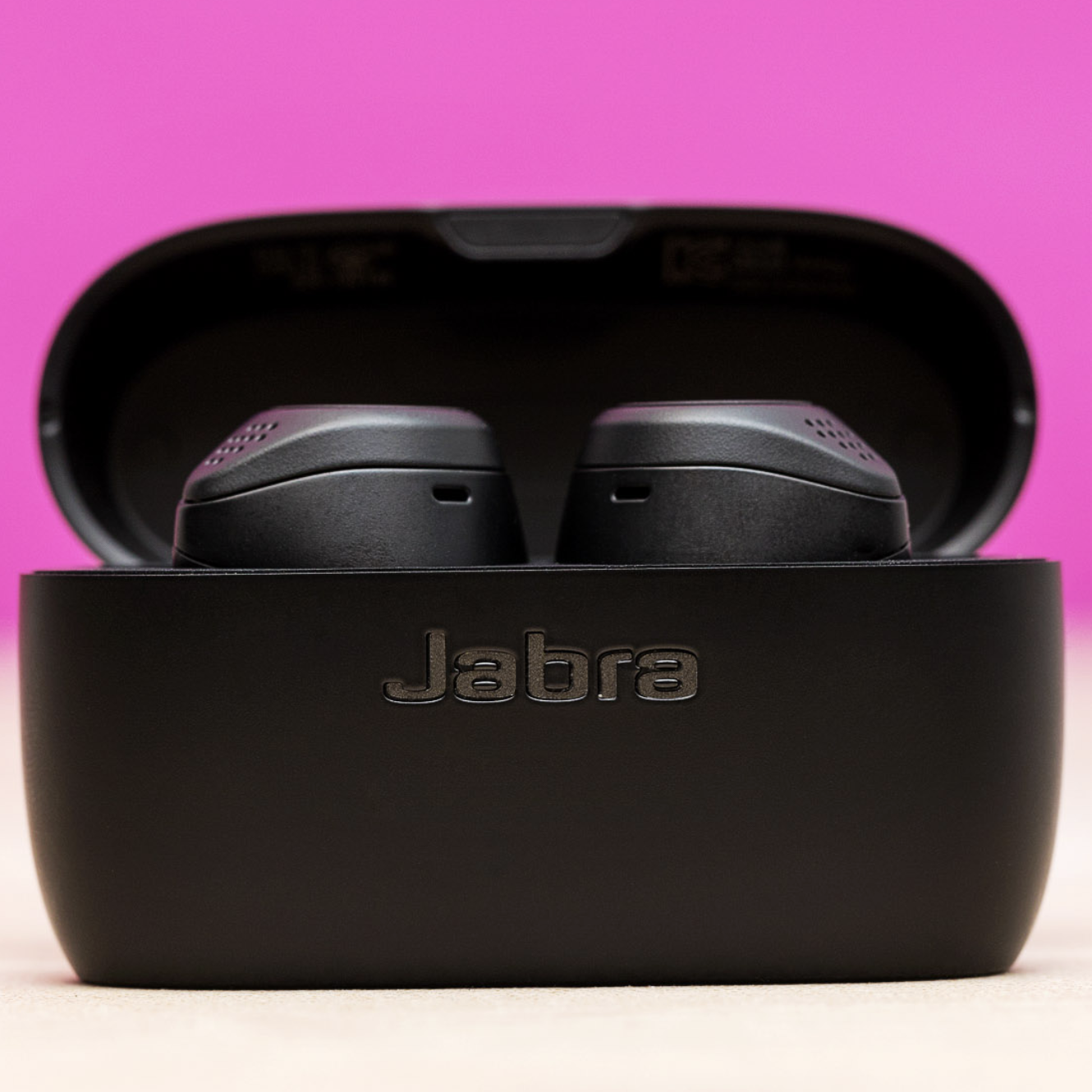 Jabra managed to shrink the earbuds by 20 percent and came up with a design that’s both more subtle and more comfortable than the 65t. The previous earbuds were chunkier and had an awkward fit in some ears that caused discomfort over time, but I’ve experienced none of that with the 75t. The microphone stem has also decreased in size and no longer juts out as far from the earbuds. But this doesn’t hinder voice call quality, which remains second only to the AirPods. Everyone I spoke to could hear me loud and clear.

Overall, these earbuds look sleeker and more refined than Jabra’s previous efforts and should appeal to more people. They stayed snuggly in my ears through several workouts, despite lacking any ear hooks or wingtips as a secondary measure for keeping them in. Aside from making them smaller, Jabra also cut down on the weight of the 75t earbuds so there’s less risk of them coming loose and tumbling out of your ear canal. The earbuds are IP55 water and sweat resistant; if you’re explicitly looking for a gym or workout set of buds, it might be worth looking at the new Active version, which is fully waterproof with an IP57 rating and can survive submersion in up to 1 meter (3.28 feet) of water.

Despite the reduction in size, Jabra has increased battery life significantly. The company promises up to 7.5 hours of continuous audio playback, and 28 hours of total running time if you count the extra charges from the case. That’s notably longer than either the AirPods or AirPods Pro and enough to get you through a coast-to-coast flight, even if my testing came closer to around 6.5 hours.

Jabra has improved the carrying case in a few convenient ways: it’s easier to open one-handed — the annoying latch is gone — and there’s now a USB-C port instead of Micro USB. The case lid closes magnetically, and the buds themselves are also firmly seated with magnets. You can shake the case all about or even knock it against your other hand, and the earbuds won’t fall out. The one big miss is wireless charging, which is something you can get from the AirPods Pro and Galaxy Buds, in addition to also less expensive options like the Anker Soundcore Liberty 2 Airs. Jabra has suggested a wireless charging case is coming, but it has yet to specify when.

Another thing Jabra has omitted from these earbuds is active noise cancellation. If you can get a good seal with one of the included sets of ear tips, the 75t does a nice job of noise isolation and quieting down your surroundings. But they can’t put you in a private bubble with your music or podcasts quite like the AirPods Pro or Amazon Echo Buds, not to mention what over-ear headphones like Bose or Sony offer.

It’s possible to use the Jabra Elite 75t earbuds through traditional Bluetooth pairing and without agreeing to anything. But upgrading the firmware (which sometimes adds new features), customizing the EQ, and adjusting other settings of the earbuds requires Jabra’s Sound+ app for either Android or iOS.

There are no agreements to tap through in Sound+, but choosing Alexa as your preferred voice assistant subjects you to Amazon’s terms of service and Alexa privacy settings.

Using the “Find My Jabra” feature requires always-on location access, as it tracks where you were when the earbuds last disconnected from your device. Jabra says this data is only stored locally.

Add it up, and you’ve got no mandatory agreements but up to three optional ones.

Like its competitors, Jabra includes a way to pipe in outside audio for situations where you need awareness of what’s happening around you. A press of the left earbud’s physical button activates HearThrough mode. With the AirPods Pro, transparency mode can make it feel like there’s a soundtrack playing in the background of your life in that moment; it’s almost like you’re not wearing earbuds at all. But HearThrough on the 75s sounds slightly less natural, so you lose that effect. If you need to have a short conversation or hear an announcement, it still does the trick just fine. And you can customize just how much passthrough audio comes through, cranking it up or dialing it down to your liking with the Jabra Sound+ smartphone app. But it’s not likely something you’ll keep on all the time.

On each earbud is a single round button that’s easy to find and doesn’t take much force to press. But Jabra has crammed a lot of functionality into those two buttons, and it’s easy to get mixed up on what each one does. I appreciate the flexibility and will always prefer buttons to having a voice assistant handle tasks like adjusting volume, but the system takes some memorization.

One strength of the 75t earbuds is that they can be paired to two devices simultaneously, so you can have them connected to both your PC and phone in case a call comes in. This luxury is fairly common with standard Bluetooth wireless headphones, but it’s still something of a rarity for true wireless earbuds.

Jabra has made impressive strides in audio quality with the Elite 75t. Like their predecessors, they’re limited to SBC and AAC codec support, but they have a warm, crisp, and detailed sound signature. No one’s going to call these neutral, however; bass gets such a boost that I found myself toning down some of the boom in the Jabra app EQ menu. Bombastic is definitely the word for the out-of-box low end you’ll get from these. Compared to their 65t predecessors, the 75t have a more pleasing, nuanced sound with excellent instrument separation, and it’s easy enough to keep the bass in check. The Jabra app lets you save different EQ preferences for general listening, commuting, and so on, so the earbuds can adapt to pretty much any setting.

As for reliability, I experienced virtually no signal dropouts or unexpected behavior in my time testing three separate pairs of the 75t earbuds. Jabra has promised updates in the second quarter of this year, including a feature that will personalize the sound profile to your own hearing. This idea has proven somewhat gimmicky in the past, but Jabra says it’s borrowing technology and expertise from sister company GN Hearing — a maker of actual hearing aids — so we’ll see. Also in the second quarter, you’ll be able to use either the left or right earbud in mono mode; right now, only the right one can work independently.

If you’re not interested in Apple’s AirPods Pro or the similarly expensive Powerbeats Pro, the Jabra Elite 75t earbuds are yet again slotting in as the default alternate pick. There are other options, but none with the same number of upsides. The Jaybird Vistas cost about the same and come in a wonderfully compact carrying case, but they don’t sound as good. Amazon’s Echo Buds are cheaper and have Bose’s noise reduction technology, but they can’t pair with two gadgets at the same time. The competition is only going to grow fiercer over the next few months, so Jabra will have a harder time staying at the top of the pile, but aside from adding active noise cancellation and wireless charging, it doesn’t have much higher to climb.