A lot has changed with Windows on ARM

What a difference a year makes.

I loved the Surface Pro X design when I pitted it against the Surface Pro 7 last year, but in practice this ARM-powered device wasn’t quite ready. I couldn’t install a bunch of apps I use daily, and even Microsoft’s own Chromium Edge browser wasn’t available. I had to rely on an emulated version of Chrome that ran poorly, and just give up on getting some of my favorite apps to work. It wasn’t an enjoyable experience.

Microsoft is back with a refreshed $1,499 Surface Pro X this year, and not much has changed hardware-wise. The 2020 model includes an updated Microsoft SQ2 processor, with promises of improved performance and battery life. But the real story is how much has changed for Windows on ARM app support over the past year.

I can now run most of the apps I need on this new Surface Pro X, and most run a lot better than they did a year ago. I concluded my review of the original Pro X wishing that it had an Intel chip inside. This year, I’m not so sure it needs an Intel chip anymore. 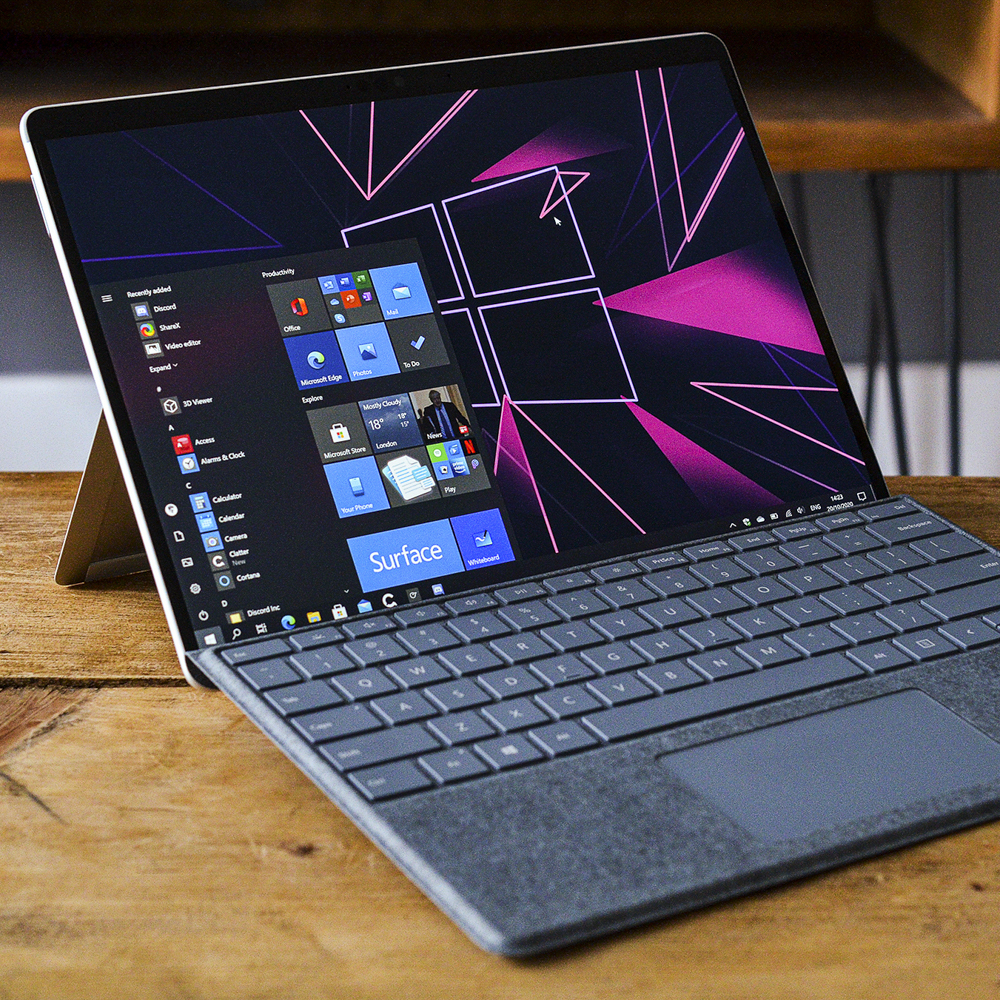 The basic Surface Pro X hardware hasn’t changed for this latest model. Microsoft is still using the same 13-inch PixelSense touchscreen display, with its great viewing angles, 3:2 aspect ratio, and trimmed down bezels. There are two USB-C ports, a Surface Connector, and, well, nothing else. There’s no microSD slot, but you can pop open a door on the back that provides access to the nanoSIM slot and replaceable SSD. There still isn’t a headphone jack, either.

Microsoft is offering a new color option this year, though. It’s the classic “platinum” silver that is available on most other Surface devices, and there are a number of colorful Type Covers to match. Just like last year, the Signature Keyboard comes bundled with the Slim Surface Pen for $269.99 or you can purchase one without the pen for $139.99.

I wasn’t a big fan of this new keyboard last year as it felt a lot more wobbly than the usual Surface Pro keyboards. The latest Signature Keyboard feels slightly improved here, and I don’t notice it cutting off portions of the taskbar as much anymore.

Inside the Surface Pro X, Microsoft is using its SQ2 chip, a variant of Qualcomm’s Snapdragon 8cx Gen 2 5G, without the 5G support. It’s disappointing not to see 5G here, even if networks aren’t really fully built out to make use of its improved speeds and coverage. You can still use it with LTE networks.

Even though this hardware design is from a year ago, I still love it. It’s genuinely the best Surface design I’ve ever seen from Microsoft. While it’s a refinement over the Surface Pro line, everything from the rounded edges to the trimmed down bezels just looks and feels great to use. I hope Microsoft can eventually squeeze an Intel chip inside this chassis.

While the hardware is mostly the same, the software has definitely seen some improvements this year. It’s clear that a year in software updates and app compatibility has made a big difference. The original Surface Pro X performance was a little erratic, with apps feeling laggy and the system slow to resume from standby on occasion. I haven’t experienced any of these issues with this latest model.

In fact, this new Surface Pro X blasts past the Windows Hello facial recognition screen and straight into the Windows desktop with ease. Microsoft says it hasn’t made specific changes to Windows Hello, but everything feels a lot smoother to me.

Spotify brought the Surface Pro X to its knees last year, but I’ve noticed it now launches without killing the rest of the system. It still takes a while longer than I’d expect to render album art, but it’s greatly improved over what I was experiencing on the original Surface Pro X. Discord also feels a little better this time around, and I’m seeing less performance issues during calls. I can also install apps like Clatter, ShareX, or Tweeten without errors or problems.

But not all of the app compatibility issues have totally disappeared. If you’re used to Dropbox integrating into File Explorer then you’ll have to settle for a basic Windows Store app instead. Apps that integrate into the Windows shell still aren’t supported.

Adobe also promised a year ago to bring all its Creative Cloud apps over to the Surface Pro X, but we’re still waiting on a release date. It will likely be a long wait for these mobile- and cloud-optimized apps on the Surface Pro X.

As with other Windows 10 computers, the Surface Pro X presents you with multiple things to agree or decline upon setup. The mandatory policies, for which agreement is required to use the laptop, are:

While the Adobe wait continues, you might assume that the company’s Creative Suite desktop apps would run on this latest Surface Pro X. Unfortunately, they do not. I was able to run Photoshop on the Surface Pro X last year, but now you can’t install any Creative Suite apps at all. Adobe’s installer now errors out saying it’s not available for this device. That means I can’t even install the 2018 version of Photoshop I was able to use last year. And nope, no version of Lightroom will work. It’s hugely disappointing for a device that could be ideal for quick photo or video editing on the go.

The native version of Edge runs as smoothly as if it was running on a regular Intel laptop. It’s hard to notice the difference in my day-to-day work. I spend most of my time in a browser for work and even for watching YouTube videos, for using Twitch, and for reading content online.

The big promise of ARM laptops has been battery life. Some have claimed 23 hours of battery life, and even Microsoft says this new Surface Pro X should run for 15 hours. The reality is still far off, because a lot of apps still run emulated and hit the battery life.

Edge really demonstrates the potential of the Surface Pro X, though. This tablet and laptop hybrid feels at its best when apps like Edge are optimized for it, and these types of apps also help with battery life. I’ve been comfortably getting at least 8 hours of battery life on this updated model, using a mixture of desktop apps and heavy use of the Edge browser. If you’re using a lot of emulated apps then this will understandably hit battery life more, which is something we saw with Chrome running on the Pro X last year.

A taste of an ARM-based future

Using this device over the past week has certainly given me renewed hope for new ARM-powered laptops. Microsoft’s latest Surface Pro X is a better glimpse into an ARM laptop future that has been promised for years.

It no longer feels like ARM-powered laptops are futuristic or not quite ready. The Surface Pro X seems like most regular Windows laptops now, and it might not even need the support of Adobe and others to truly shine. The vast majority of desktop apps have moved to 64-bit, and Microsoft is about to deliver x64 app emulation support for Windows on ARM. That should solve most of the lingering app compatibility issues, but we’ll still need to see fully native 64-bit ARM apps to keep battery life in check.

With Apple set to release its own Macs with ARM-powered chips, the race towards ARM laptops could be about to step up a gear. Microsoft is out front, leading with some beautiful hardware that still needs the software to catch up. But the potential for this ARM revolution is much further along, and both Microsoft and Qualcomm are chasing after developers to convince them to port apps fully to ARM.

I can’t stress the potential element enough with the Surface Pro X. With Microsoft offering a base model with the older SQ1 processor for $999.99, it feels like we’re on the verge of ARM-powered Windows laptops becoming a lot more affordable and capable.

The big problem is that you’re paying $1,499 for a delightful ARM-powered Surface device with that potential. The Surface Pro X might not be an experiment for Microsoft or Qualcomm, but $1,499 is a big price to pay for beautiful hardware that still has some software weaknesses.

Correction: An earlier version of this review stated Spotify’s app for Windows on ARM runs at 64-bit, but it still runs at 32-bit. We regret the error.