Last month, Nvidia’s RTX 3080 ushered in the next generation of 4K gaming with an impressive leap in performance over the 2080 model it replaced. While Nvidia’s flagship card was designed to push 4K, the $499 RTX 3070 is $200 less expensive and still promises big performance gains over the previous-generation RTX 2080 and even the RTX 2080 Ti. Like all of Nvidia’s RTX cards before it, the RTX 3070 can also take advantage of ray tracing and Nvidia’s AI-powered DLSS technology to boost frame rates and still maintain great image quality.

This combination of performance and price puts the RTX 3070 in the ideal sweet spot for 1440p gaming. The vast majority of PC gamers are still using 1080p displays, and the RTX 3070 offers up an upgrade path to 1440p without the steep cost of an RTX 3080 and the extra power draw.

I’ve spent the past week testing out the RTX 3070 at both 1440p and 4K ahead of its October 29th debut, and it’s fair to say this card will give you a lot of headroom for games coming in 2021 and beyond so long as you’re playing at 1440p or below. If you’re considering the move to 1440p, the RTX 3070 is the more budget-friendly option if you want to futureproof along the way. 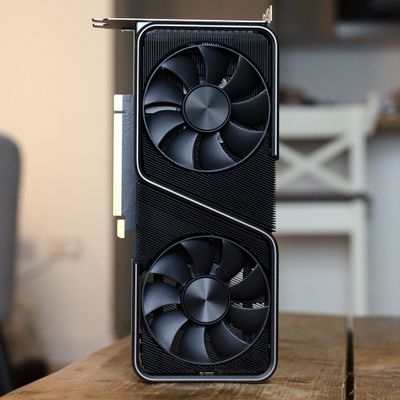 Nvidia made some big changes to the cooling on the Founder’s Edition RTX 3080, but it’s maintained a traditional dual-fan setup with the RTX 3070. The dual-axial fans work in tandem to keep the card cool, with the right fan pushing air all the way through the card’s shroud to the opposite side, while the left directly cools the GPU cores with air that can exhaust out the rear of your chassis.

During my testing, I rarely heard the fans spin up, even with the card hitting temperatures of 75 degrees Celsius. While the RTX 3070 doesn’t benefit from the same push-pull system found on the RTX 3080, it does pick up some of the other hardware improvements found on the flagship.

The hardware design on the RTX 3070 is very similar, allowing Nvidia to use a dense PCB that’s a lot smaller to improve airflow throughout the card. And just like the RTX 3080, Nvidia is using its new 12-pin single power connector, as opposed to the separate 6- and 8-pin or twin 8-pin connectors on prior cards.

Nvidia has included its own adapter inside the box. Since the RTX 3070 only needs a single 8-pin power connector, it makes the adapter a little less wieldy than the one found on the RTX 3080. Still, I would highly recommend picking up a direct 12-pin connector from your PSU manufacturer instead of using the ugly adapter.

The RTX 3070 also includes a single HDMI 2.1 port and three DisplayPort 1.4a ports. Much like the RTX 3080, Nvidia has dropped the USB-C VirtualLink port found on the RTX 2080, which never saw any real adoption for VR. While the RTX 3080 has pure white LEDs around the fan and to light up the GeForce RTX branding, the RTX 3070 ditches this for a simple look without any lighting.

Like my RTX 3080 testing, I’ve been playing a variety of AAA games to understand what the RTX 3070 is capable of. I’ve also performed average frame rate testing and used built-in benchmarks across a variety of games, including Fortnite, Control, Death Stranding, Metro Exodus, Call of Duty: Warzone, and Microsoft Flight Simulator. All games were tested at max or ultra settings, and nearly every title exceeded the 100fps average mark at 1440p.

Fortnite came close to hitting my monitor’s max refresh rate with maxed-out settings, averaging 138fps. Call of Duty: Warzone also came close, averaging 130fps. Normally, I’d adjust graphical settings way down to hit these types of frame rates, but the RTX 3070 was able to handle both games with ease. As you can see in the benchmark chart below, you won’t often need an RTX 3080 to max out today’s games with a 1440p monitor.

For high refresh rate monitors, in particular, Nvidia’s DLSS technology really feels like a magic switch to show off just how far you can push this card. Nvidia’s DLSS technology uses neural networks and AI supercomputers to analyze games and sharpen or clean up images at lower resolutions. DLSS allows a game to render at a lower resolution and use Nvidia’s image reconstruction technique to upscale the image and make it look as good as native 4K or better.

Most games that implement DLSS allow you to pick between performance or quality modes, and in Fortnite, I tested both. I was able to get a 215fps average with the performance DLSS mode enabled, and a 172fps average when I favored quality. It’s difficult to notice the impact on image quality in the performance mode, and the quality mode looks the same if not better. I’m still surprised at how well DLSS works.

Even without DLSS, demanding titles like Control still hit 95fps with maxed-out settings, and Metro Exodus managed to hit 30fps with the highest-level settings enabled. The RTX 3080 felt like a very comfortable option for 1440p and may have more staying power, but the RTX 3070 is so close behind that you could skip it and save $200 at this resolution.

It’s more of a 50 / 50 split on how many games hit 60fps or more on the RTX 3070 with maxed-out settings at 4K. Shadow of the Tomb Raider didn’t quite make it, nor does Control, which regularly drops below 30fps during gameplay even without ray tracing.

Fortnite and Call of Duty: Warzone do well to maintain above a 60fps average, but there’s not enough headroom in most modern games to make this a capable 4K card without compromise. You’ll need to drop visual quality to maintain higher frame rates at 4K, which was the story of the RTX 2080 as well. Only this time, you’ll pay $200 less to get better performance.

DLSS certainly helps here, though. While Control is unplayable at 12fps with ray tracing enabled at 4K, if you use the DLSS quality mode alone the frame rate jumps to a reasonable 83fps. Likewise, I managed to get a 139fps average in Fortnite with the DLSS performance mode enabled.

DLSS alone means the RTX 3070 can stretch to be a 4K, 60fps card in most of today’s games, even if it might not be enough tomorrow. As Metro Exodus and Microsoft Flight Simulator show, there are already games where this brand-new card can’t hit 30fps without lowering graphical fidelity.

Speaking of futureproofing, the RTX 3070 only has 8GB of video memory, lower than the 10GB of memory that was already slightly worrisome on the RTX 3080. 4K games currently average between 4GB and 6GB, and some titles are already demanding that much at 1440p. While 8GB should be enough for 1440p, I would still have liked to have seen at least 10GB on the RTX 3070 and 12GB on the RTX 3080. There’s room for Nvidia to launch additional 3080 and 3070 cards with more memory on board, probably in a future Super branded edition.

I should also note here that I had two back-to-back driver crashes while using the RTX 3070 in Call of Duty: Warzone. The RTX 3080 had some early driver issues with certain games that were later fixed, so this could have simply been some quirks in the review drivers. I haven’t been able to replicate the issues, though.

Nvidia’s big performance promises for the RTX 3000 Series of cards are holding up. I’m surprised at how small, powerful, and quiet the RTX 3070 is. While the RTX 3080 ushers in a 4K gaming era for those with the budget to really go all out, the RTX 3070 offers a slightly more affordable option for moving from 1080p to 1440p.

The RTX 3070 is the 1440p sweet spot right now. With more games supporting DLSS, and even ray tracing, I think it’s going to be a card that will be great at 1440p for years to come. I wouldn’t recommend an RTX 3070 for 4K gaming, though. If you’re willing to spend extra for 4K, then the RTX 3080 is a far more capable option.

The biggest problem with the RTX 3070 will be similar to the RTX 3080: availability. Nvidia promised that it had “great yields” for the 3080, and it was “making them as fast as we can.” Unfortunately, the launch was messy, with demand massively outstripping supply. I expect the same will happen with the RTX 3070, even with the delay to its launch to build up stocks.

If you’re upgrading from a GTX 1070 or even a GTX 1080, particularly if you’re moving from 1080p to 1440p, the RTX 3070 feels ideal to me. I think this card, and whatever other lower-priced GPUs Nvidia has planned, will help usher in a move toward 1440p for a lot of people wanting to upgrade their PCs.

If you can get your hands on one, the RTX 3070 will make the leap to 1440p just that little bit more affordable.

The GPU shortage is over