Part of The Verge Guide to macOS

The Mac mini has always been Apple’s most flexible desktop computer. Sure, most people go for the traditional experience and plug in a display, mouse, and keyboard — but you can also have it serve as a home theater PC, or put it to work with professional photo or audio editing, or turn a group of minis into a server farm. Apple opened new possibilities for the mini with the big upgrade it got in 2018, and two years later, it’s one of the first three Macs to transition away from Intel processors and showcase the potential of Apple silicon and the M1 chip. (It’s also worth noting that Apple was using the mini as its early Arm test unit for developers, so the company was already partway to a consumer product.)

Apple has dropped the starting price for the M1-powered Mac mini down to $699, which is $100 less than before. For that money, you get an eight-core CPU, eight-core GPU, 256GB of storage, and 8GB of RAM. The review unit I received costs $1,299, as it increases the SSD size to 1TB and doubles the memory. But the Apple M1 chip stays the same no matter which configuration you choose, and it matches the one in the new 13-inch MacBook Pro. Like that machine, the mini has a fan for cooling, but it also has the most efficiently cooled chassis of all the new M1 Macs. As a result, it’s technically the best performer — even if only by a smidge. 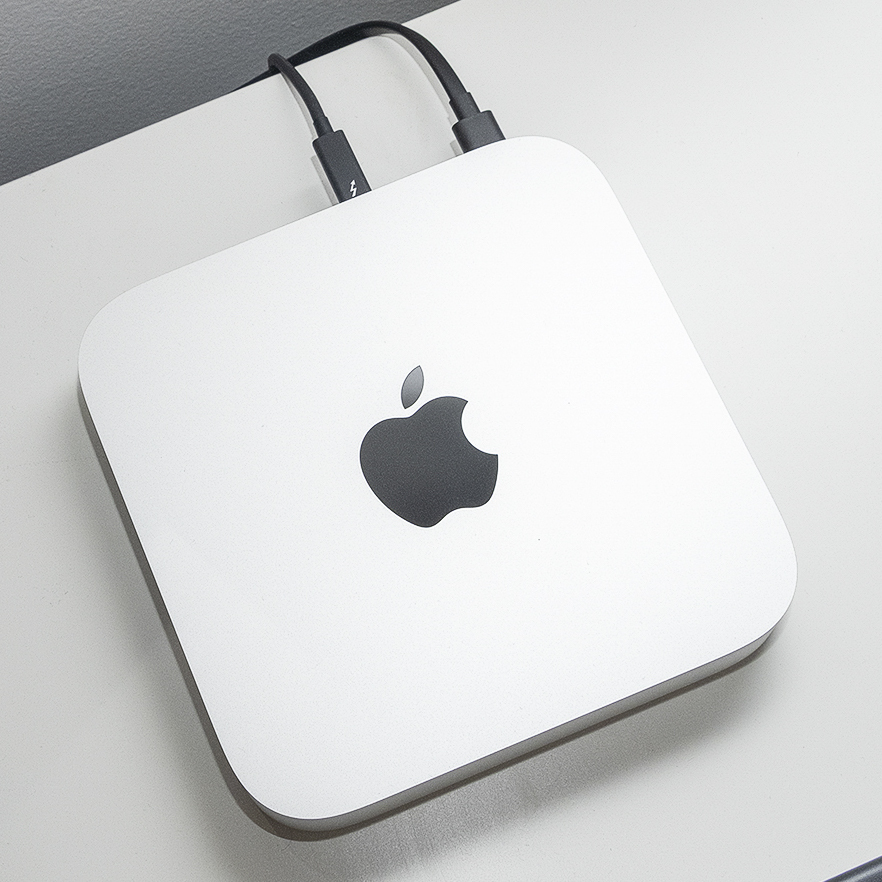 Aside from returning to a silver exterior from the previous space gray, this mini looks mostly like the old one. I say mostly because compared to the new MacBook Air and 13-inch MacBook Pro, the Mac mini has actually undergone the most significant outward design change: it lost a couple of ports. Apple has gone from four USB-C / Thunderbolt 3 ports to just two — plus the pair of USB-A ports that are still present. Technically, the USB-C ports are more advanced (USB 4), and you can daisy-chain Thunderbolt devices to your heart’s content. But there’s nothing more convenient than built-in ports, and looking at this objectively, it’s a downgrade for the mini’s expandability. (You’re also now limited to connecting two external displays directly to the mini instead of three, though one of them can be a 6K monitor.) The Intel Mac mini remains available for those that demand maximum ports or more RAM, which I’ll get into later.

There’s still a speaker inside the Mac mini, but it’s the kind of speaker you’ll never, ever want to use. It’s tinny, hollow, and just plain bad; even the macOS Big Sur startup chime sounds embarrassing compared to my thunderous 16-inch MacBook Pro. Considering the speaker advancements Apple has made with its laptops, I wish it would put in some more effort here — even if the vast majority of people will plug external speakers into the mini’s headphone jack or use Bluetooth audio.

I’ve also got to point out that getting up and running with the Mac mini can be a hassle. For initial setup, you need a wired keyboard and mouse; my Logitech ergonomic keyboard and MX Master 3, which both connect over Bluetooth, were useless. They work fine after setting up the machine, but just be aware so you don’t run into this initial headache like I did.

If you read Dieter’s review of the MacBook Air and Nilay’s take on the 13-inch MacBook Pro, it shouldn’t come as a surprise that the theme of surprisingly great performance applies to the Mac mini. I’ve thrown a lot at this tiny desktop computer over the last several days, and it chews through everything — Lightroom Classic, Plex transcodes, piles of Chrome tabs — with aplomb. And those are all apps that are still designed to run on Intel chips.

Every app runs well enough to feel native on the M1

The first time you install an app built for Intel chips, you’ll be prompted to download Apple’s Rosetta 2 software, which is the secret sauce in how those apps play so well with the M1 chip. And since Apple doesn’t have to account for the tight confines of a laptop enclosure with the Mac mini, the M1 chip can hit the very best speeds it’s capable of and sustain them without throttling. Heck, I never even heard the fan spin up during repeated 30-minute Cinebench tests or when transcoding several 4K Blu-ray rips back to back. The mini has stayed silent no matter how hard I work it.

Outside of benchmark world, the Mac mini feels wonderfully fast day to day. That said, I’ve noticed the occasional odd hitch: sometimes Spotify takes a noticeable amount of bounces in the dock (up to 10) before it opens after a cold reboot of the system. That’s been pretty rare, and once Intel-optimized apps are open, performance feels indistinguishable from how they run on my fully loaded 16-inch MacBook Pro. I’ve also not run into any glaring app compatibility issues, though if there’s some piece of software that’s job-critical for you, it’s probably worth waiting on reports of how it runs on the M1.

Other benefits of the M1 chip, like instant on, aren’t as obvious when using a Mac mini compared to a laptop. Unless you’ve got an Apple Watch, you’ll often be typing in your passcode when the mini wakes from sleep, which works against the speed improvements. Would a Touch ID sensor somewhere on the Mac mini be that silly? I’d use it. Battery life isn’t a factor on the Mac mini, of course, and the M1 mini uses the same 150W power supply as the Intel model, but it’s up to 60 percent more energy efficient than the comparable Intel model. AnandTech did some tests that highlight the reduced power draw.

iPhone and iPad apps on… a desktop?

The appeal of running iPhone and iPad apps on a Mac mini seems much lower to me than it might on a MacBook. You lose some handy use cases, like offline downloads for the HBO Max app, which can be convenient when traveling with a laptop. The Mac mini outputs to my 23.7-inch LG 4K display. That’s not exactly huge, but it’s large enough to make many iPhone apps — especially the ones that can’t be resized, of which there are many — feel very out of place. Aside from the great Overcast podcast app, I’ve had a tough time finding iOS apps that I actually want to run on macOS.

If you head to the “purchased” area of the Mac App Store, you’ll now find a tab for iPhone and iPad apps. Many of these will say that they haven’t been verified for Mac. But even some that lack that warning — like Tumblr — totally crash when opened. And many developers have opted out, meaning you won’t find mainstay apps like Gmail, Instagram (though Facebook is listed), Netflix, TikTok, and countless others. Some developers are likely holding off so they can polish their mobile apps to behave better on macOS. But a lot of what’s available just… doesn’t make sense. Why would I want to run a utility app for Samsung earbuds on my Mac? Or the Dunkin’ Donuts app? It’d be nice to use my favorite guitar tuner app, Fender Tune, but it doesn’t recognize any sound input since there’s no internal mic on the mini. (It works as intended on the new laptops.) I think people are going to run into some confusion and disappointment, and it really seems like Apple should’ve made this an opt-in gallery instead of serving customers this weird mishmash.

Back to normal apps. Perhaps the biggest area where the Intel-based Mac mini trounces the M1 version is in RAM. You can outfit the 2018 mini with up to 64GB of memory, whereas the new model tops out at 16GB just like the M1 MacBook Air and Pro. (RAM could also be upgraded by anyone willing to open up the Intel Mac mini, but that isn’t so for this machine.) Apple says the new unified memory structure of these Macs “allows all of the technologies in the SoC to access the same data without copying it between multiple pools of memory, further improving performance and efficiency.”

It’s not hard to get a Mac with 16GB of memory to start swapping between RAM and the startup disk, and this is something I’ve noticed in Activity Monitor but haven’t felt in terms of diminished performance. But if you’re wanting to use the Mac mini in a creative studio or some other environment where you’ll really be pushing it harder than average, it might be better to wait until there are Apple silicon Macs with 32GB and beyond of unified memory.

In order to get past the setup and actually use the Mac mini, you are required to agree to:

These agreements are nonnegotiable, and you cannot use the laptop at all if you don’t agree to them. There are also several optional agreements, including:

The final tally is three mandatory agreements and six optional ones.

That can probably be said for high-end graphics, too. Since the M1 Macs no longer support external GPUs, you’ll always be limited to the graphical horsepower you get out of the box. That’s perfectly adequate for photo and 4K video editing, but the upper echelon of workloads might demand something more — which may warrant considering the Intel model and an eGPU.

The M1 Mac mini is the first to include Wi-Fi 6, though unlike the Intel model, there’s no option for getting it with a 10Gbps Ethernet port — just regular gigabit. But Wi-Fi performance has been very strong. And unlike the 2018 unit I owned for a few weeks back when it launched, this machine didn’t exhibit any frustrating Bluetooth interference issues. I’m not sure whether Apple shored those up over time with software updates or made hardware tweaks, but it’s nice to see them gone.

Spending a few days with the 2020 Mac mini has shown me that it’s a barnburner of a miniature desktop PC. It outperforms most Intel Macs in several benchmarks, runs apps reliably, and offers a fantastic day-to-day experience whether you’re using it for web browsing and email or for creative editing and professional work. That potential will only grow when Apple inevitably raises the RAM ceiling and (hopefully) brings back those missing USB ports. The $699 starting price is tempting, but most people will be better off upgrading to 16GB of unified memory, which puts you at $899. Doubling the default 256GB storage makes that cost climb higher to $1,099. But even then, the price-to-performance ratio for the Mac mini has never been better than with this changeover to Apple silicon. Even if you ignore iPhone apps completely, the transition is off to an impressive start considering just how smoothly everything comes together. And just as ever, the Mac mini’s flexibility is what makes it special.

Update November 17th, 10:45AM ET: The review has been updated with more specifics on the mini’s power consumption.

The Verge Guide to macOS