In a perfect world, everything would fit under the surface of smartphone displays. That’s been the principle behind the past few years of phone design, at least, ever since the iPhone X escalated the bezel wars with its conspicuous notch. From in-display fingerprint sensors to pop-up selfie cameras, we’ve seen phone manufacturers take creative approaches to achieving the highest possible screen-to-body ratio.

The latest advancement in the bezel wars is the ZTE Axon 20 5G, which goes on sale today and is the world’s first phone to integrate its front-facing camera underneath the screen. While in-display fingerprint sensors are commonplace now, doing the same for selfie cameras has proven to be more difficult. Companies like Oppo and Xiaomi have been showing off demos for years, but ZTE has beaten them to the punch with the first commercial device.

In theory, the advantages are obvious. You get an unbroken display that doesn’t need to account for a notch or hole-punch, and you don’t have to build in a motorized mechanism for a pop-up camera module. Again, if the world were perfect, the camera would just magically exist under the display without compromising image quality on either end.

Readers, the world is not perfect.

Before we talk about the camera, we should talk about the display that lies on top. I doubt this has anything to do with the camera technology itself, but the fact is that the Axon 20 5G is one of the biggest smartphones I’ve ever seen. The 90Hz OLED panel is a massive 6.92 inches diagonal, which means its 1080p resolution is a little less sharp than you’ll find on other phones. It’s not a problem in regular use, though, and the screen generally looks pretty good beyond some rough off-angle color shifting.

It sometimes looks worse than a notch

What does not look good is the comparatively huge “chin” bezel at the bottom. Even though it would have been considered extraordinarily slim just a few years ago, it really stands out on the Axon 20 5G considering the supposedly breakthrough nature of the device. I’ve seen phones that have managed to integrate conventional selfie cameras into thinner bezels than this, which kind of undermines the point of putting one under the display.

That feeling only intensifies when you go through the Axon 20 5G’s setup process, which shows the camera in the worst possible conditions. The under-display integration is extremely noticeable on light backgrounds, like what you tend to see on settings screens. There’s a square patch of the screen that exhibits a clear dithering effect, making it appear much lower resolution than the rest of the panel. I will just say right now that I think it looks worse than a notch.

In more general use, it’s harder to notice. If you’re viewing photos or a full-color wallpaper, you can see the lower-resolution area if you look closely, but it isn’t quite as distracting. And as with other companies who’ve shipped Android phones with notches or hole-punches, ZTE’s default software uses a black background for the top part of the screen where status and notification icons are displayed, which does make the camera near-invisible. But really, if you need to resort to the same old notch-hiding techniques to disguise your under-display camera, what are we even doing here?

The above images show how visible the camera is on colorful, white, and black backgrounds.

Of course, the next obvious question is how the camera actually performs. The news here is not great either. I don’t want to diminish the technical achievement of getting a halfway functional camera under an OLED screen at all — it involves new types of transparent materials, pixel filters, and demosaicing algorithms to make sense of the light that hits the 32-megapixel sensor. But the result, unfortunately, is a bad selfie camera.

In good light, the Axon 20 5G’s selfie camera takes hazy, soft photos with weak colors and blown-out highlights. Compare it to the Pixel 5 below: 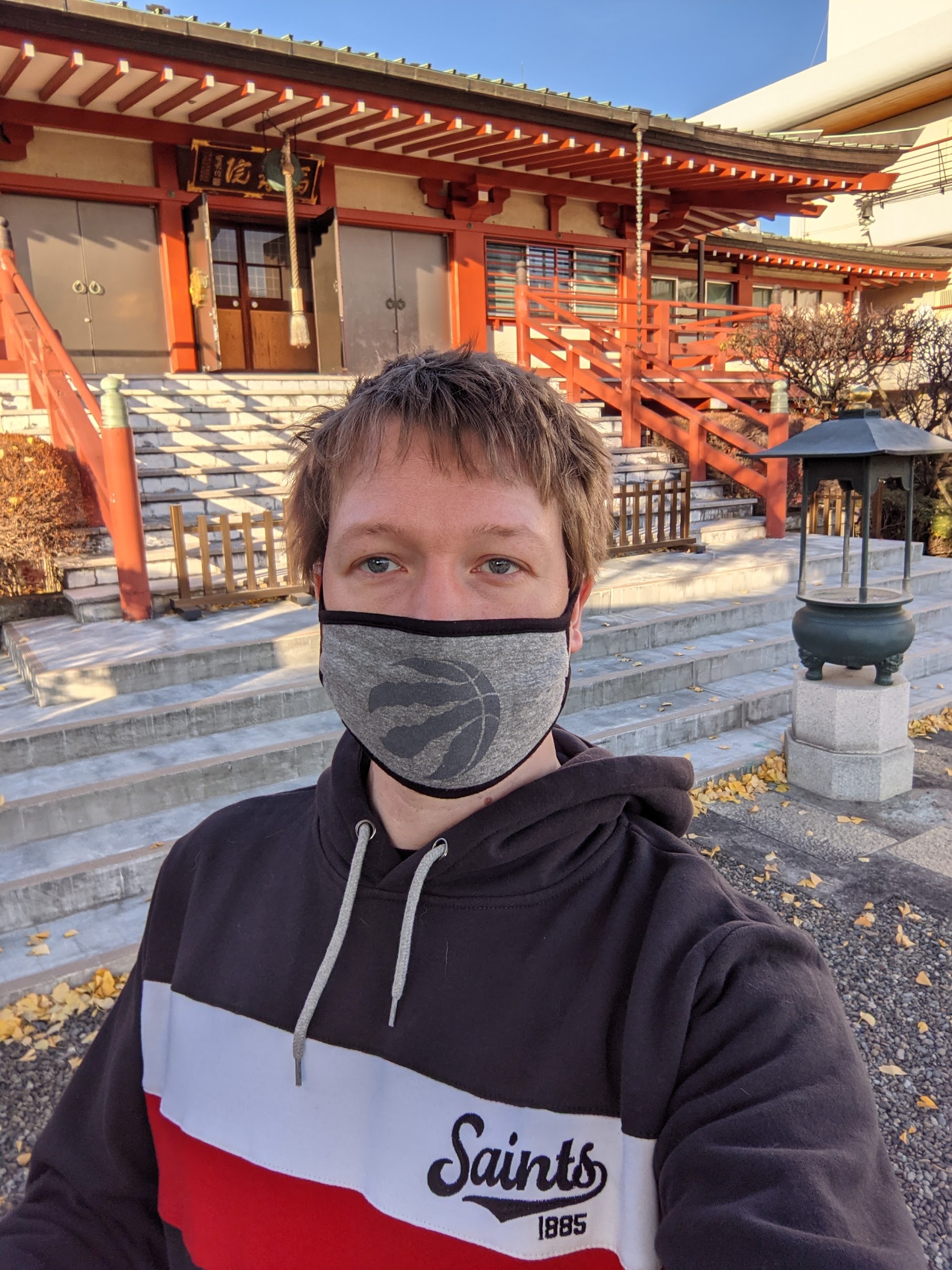 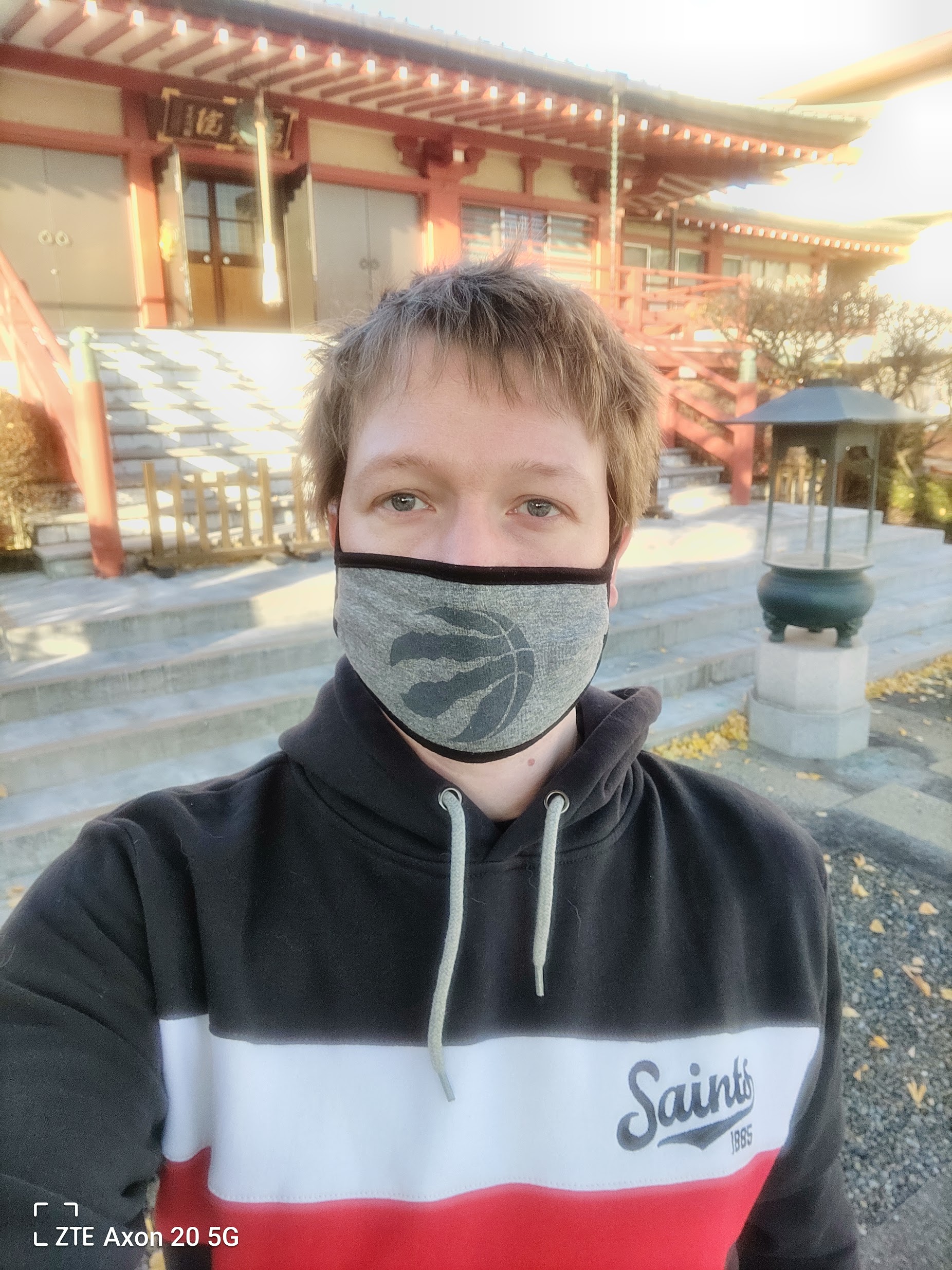 Just to be clear, that Axon 20 5G photo was taken with the portrait mode and smoothing filters turned off. 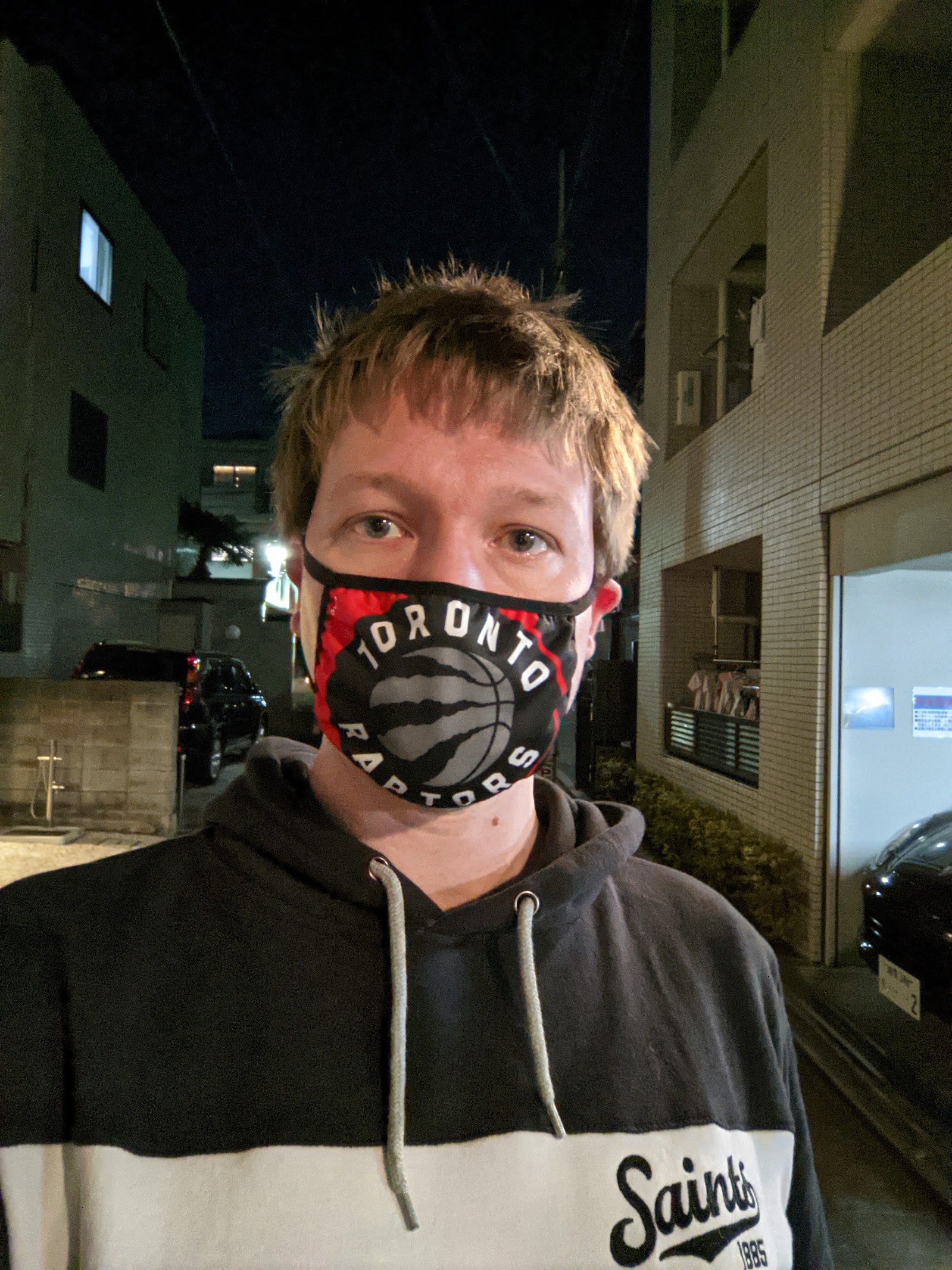 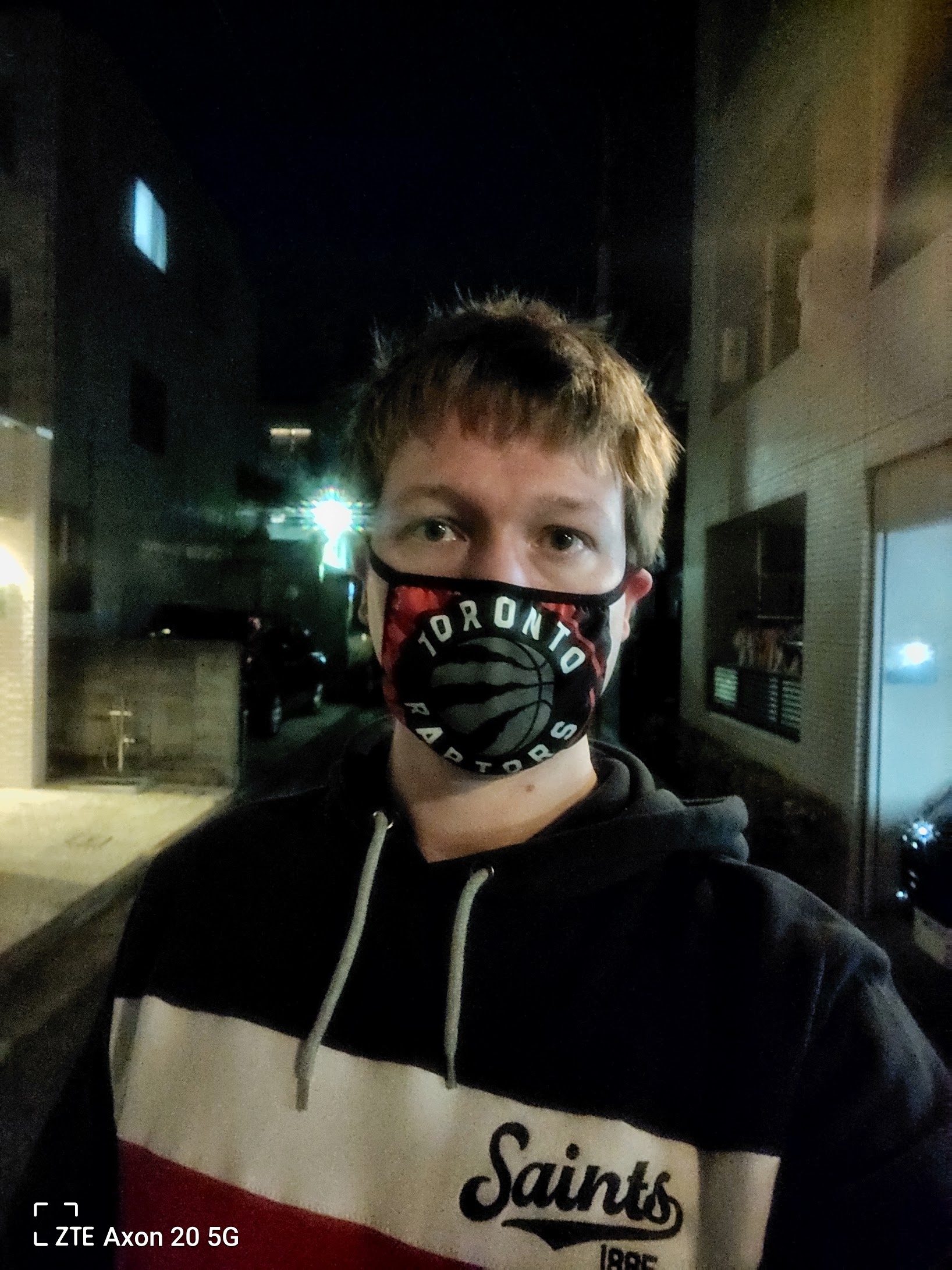 The disparity is just as stark in low light, with a ton of noise and obliterated detail. I turned off the Pixel 5’s night mode here to make it more of a fair fight, and it still crushed the Axon 20 5G.

This under-display selfie camera is merely functional, and that’s being generous. It can capture images through the screen, yes, which is indeed a minor miracle. But you probably wouldn’t want anyone else to see them.

This is otherwise a pretty credible phone for $449

This isn’t the most effusive compliment I can give a phone with a supposedly breakthrough selfie camera, but the ZTE Axon 20 5G is actually a much better proposition if you don’t care about selfies or video calls. It’s otherwise a pretty credible phone for $449, though despite providing a dollar price ZTE says it won’t be available in the US or Canada for now. (It’s €449 in the EU and £419 in the UK.)

While the Axon 20 5G has a huge footprint, it’s still slim at just under 8mm thick, and ZTE has included a reasonably large 4,220mAh battery inside. The processor is a Snapdragon 765G with an integrated 5G modem, same as the Pixel 5 and the LG Velvet, and it can be configured to have up to 8GB of RAM and 256GB of storage.

Other specs include an optical in-display fingerprint sensor that works fine, 30W fast charging over USB-C, and a headphone jack. There’s a 64-megapixel main camera and a 16-megapixel ultrawide, along with 2-megapixel macro and depth sensors that you can probably ignore. The main areas where ZTE has cut corners are its mediocre haptics system and an unimpressive downward-firing speaker.

The fact that ZTE finally got a phone like this onto the market is a notable milestone, but I’m not sure who the device is really for. The under-display selfie camera often looks worse and more distracting than a notch, and the image quality is clearly compromised. It’s ironic that a phone might be more appealing to an audience that actively doesn’t care about its key selling point, but that’s where we’re at with the Axon 20 5G.

Google changed the Assistant’s white noise sound, and many aren’t happy about it