Samsung has made impressive progress with its latest true wireless earbuds

Samsung’s original Galaxy Buds were decent true wireless earbuds: they offered impressive battery life, wireless charging, and a lightweight, comfortable fit. But sound quality was merely okay, and their built-in mics were awful when it came to voice calls. If you got the $129 Galaxy Buds as a phone preorder bonus or on sale at a discount, there was reason to be happy. But paying full price for them wasn’t as easy to justify.

For 2020, Samsung is back with the Galaxy Buds Plus. They look mostly identical to the originals, but they contain several key improvements. Battery life has been extended to a class-leading 11 hours; sound quality has been ramped up, thanks to a new dual-driver design; and they’re finally a good option for making calls. Samsung has hiked the price by $20 to $149, but the new Galaxy Buds Plus are more well-rounded than their predecessors in pretty much every way.

Our review of Samsung Galaxy Buds Plus 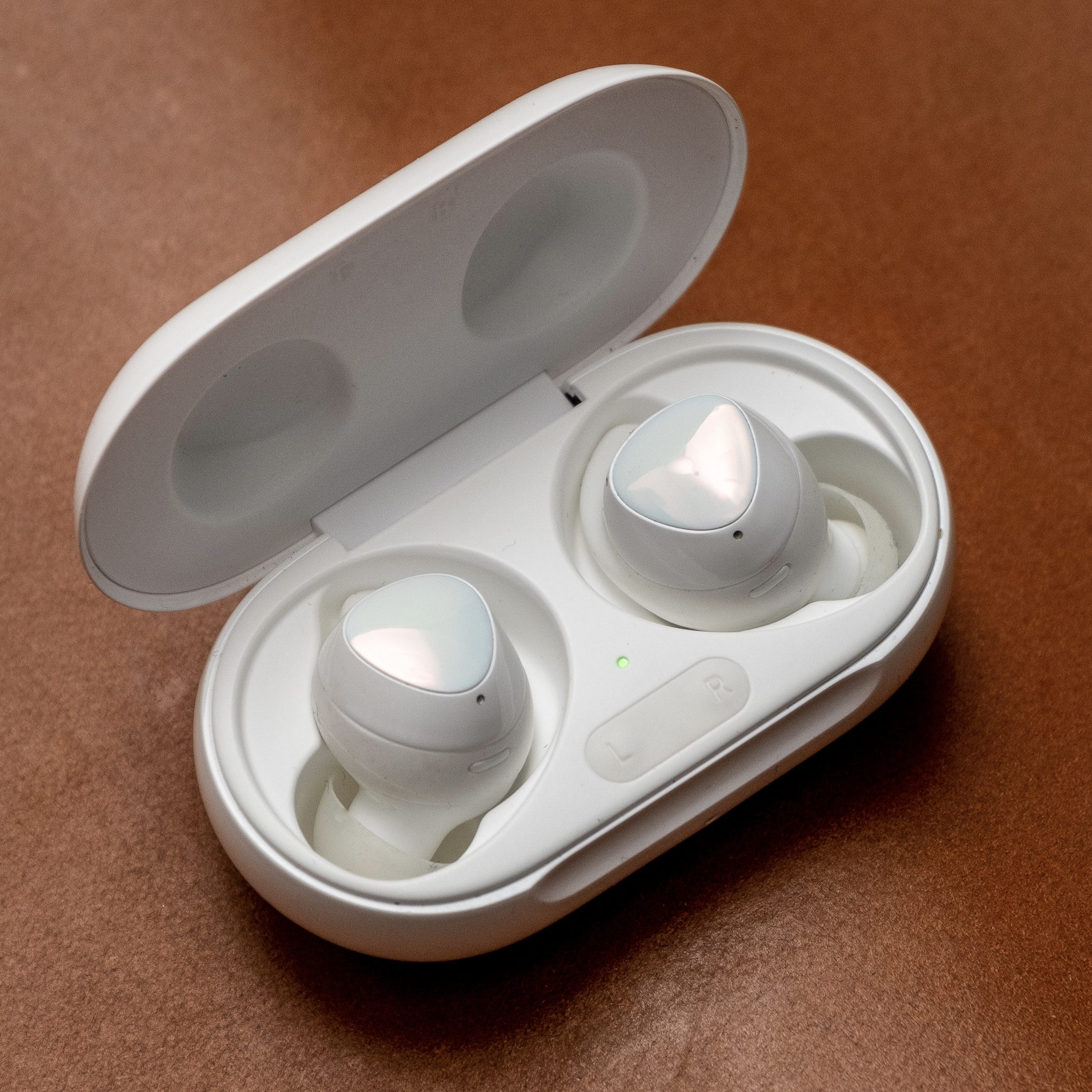 Not much has changed on the outside. The case is glossier than before with raised indicators for the left and right earbud cradles, and Samsung has added a second outer microphone to the earbuds. Those are really the only subtle tells that you’re dealing with the newer Galaxy Buds. The Galaxy Buds Plus come in black, white, and blue, and as with the previous model, the white buds give off a nice pearlescent effect.

Like other companies, Samsung packs in three sizes of ear tips and also gives you a choice of silicone ear hooks to help the Galaxy Buds Plus latch securely into your ear. Comfort was never a problem for the old Galaxy Buds, and these retain the same excellent fit — provided the included tips work for you. They’re lightweight to the point of being unnoticeable, and the subtle design doesn’t draw attention to your ears. If you’re someone who doesn’t like the feel of in-ear earbuds and the seal they create, these won’t do anything to change your mind. They lack the vent system of Apple’s AirPods Pro that can help alleviate ear pressure. But at $149, it makes more sense to compare the Galaxy Buds Plus to the regular AirPods and other competitors like the Amazon Echo Buds and Jabra’s Elite 75t earbuds.

I mention that because the main thing you sacrifice compared to pricier options is active noise cancellation. The Galaxy Buds Plus can achieve satisfactory passive noise isolation — certainly better than the open-design AirPods — but they are unable to mute your surroundings quite to the level of Sony’s 1000XM3 earbuds or the AirPods Pro. Even Amazon’s Echo Buds pack in Bose’s noise reduction technology, which helps silence the outside world. Still, I found myself able to wear the Galaxy Buds Plus for hours at the coffee shop or office without getting distracted or annoyed by outside noise.

Samsung’s approach to controlling the earbuds hasn’t changed. You’ll still be tapping the touch-sensitive outer portion of the Galaxy Buds Plus to play and pause music, skip tracks, or answer calls. The long-press action is customizable, letting you choose between voice assistants (Bixby, Google Assistant, Siri), ambient sound mode, or volume controls. I always favor having direct volume controls without having to whip out my phone, so that’s what I tend to pick.

If you’ve got an Android phone, there’s another long-press option: Spotify. When this option is selected, Spotify will open and immediately start playing something it thinks you’ll like. It could be a playlist like a Daily Mix or Release Radar, or just a song that the Spotify algorithm serves up for you. I wish there were a way to set this to do one particular thing every time, but as far as I can tell, there’s always a randomness factor.

The Galaxy Wearable app (or Galaxy Buds Plus app if you’re on iOS) has another neat, experimental feature. If you go into the labs section, you can enable an alternate way of controlling volume that lets you double tap the outside of the earbuds — not the touchpad but the top of the buds themselves — to increase or lower the volume. This seems to use the accelerometer built into the earbuds, and it worked surprisingly well in my tests. It also frees up the touch and hold gesture for one of the other features outlined above.

As with other Bluetooth earbuds, you can use the Galaxy Buds Plus without agreeing to anything in software. But the app plays an important role in configuring settings, and once you install that, you’re agreeing to:

Add that up, and you’ve got no mandatory agreements but two optional ones that are necessary for the complete experience.

The app is where you’ll configure ambient sound mode and decide how loudly you want to amplify external noise when it’s activated. Samsung has done a better job with ambient mode this time around, and the effect feels less robotic and unpleasantly digital than before. You can also adjust EQ settings in the earbuds’ companion app, and while I’ve seen some people praise the “dynamic” option, I still greatly prefer the default, out-of-box sound profile.

And that brings us to sound quality. Samsung has redesigned the Galaxy Buds Plus with a dual-driver design (with a dedicated tweeter and woofer in each earbud), and this upgrade makes a considerable difference compared to the previous model. In short, they sound far better — for $150 earbuds, that is. Instruments and vocals have distinct separation, and Samsung seems to be going for a neutral listening experience. Nothing gets too pushed too much, and the treble and mids have a nice balance. For codecs, Samsung supports SBC, AAC, and its own Scalable codec, which can transmit at higher bitrates if you’re also using a Samsung phone.

Bass from the Galaxy Buds Plus lacks the same level of oomph that you get with the latest Jabras, but it’s still enough to make for a pleasing low end. My main critique is the soundstage: everything can sound a little mushed together, and you don’t get the same expansive spread and immersion as you’d find from something like the 1000XM3s. But again, you’ve got to factor in price.

The best thing about the Galaxy Buds Plus is how long you can listen to them uninterrupted. Samsung has managed to squeeze 11 hours of continuous battery life out of the earbuds, which now puts them at the top of the mountain. That’s even better than the Powerbeats Pro, which, until now, had been the longevity champion. Eleven hours will cover your entire workday or a long-haul flight with ease.

And in my experience, Samsung’s estimate is right on point. This raises the bar for true wireless earbuds, which is especially important since your Galaxy Buds Plus will hold less of a charge in a year or two. Even then, they should still last a good while. The charging case nets you another 11 hours for a total of 22 before everything needs recharging. If you find yourself in a pinch with depleted earbuds, Samsung says you can plug them in over USB-C for three minutes to get an hour of listening time. As before, the case supports wireless charging and can be juiced up when resting on Samsung’s recent phones.

The microphones on the Galaxy Buds Plus are also a big improvement. These earbuds are now much better suited for voice calls, whereas the older ones were a disaster that produced garbled, unintelligible audio. Adding the secondary outer mic has resolved those issues, and I’m now confident when placing calls or joining work video chats with the Galaxy Buds Plus — instead of the embarrassment that came before.

So far, I’ve given these earbuds a heap of praise, but there are downsides. The Galaxy Buds Plus can’t connect to two devices simultaneously. Samsung says they’ll automatically be linked up with devices using your Samsung ID — the company is trying to replicate some AirPods convenience there — but you lose out on seamlessly switching between, say, your laptop and phone. Water and sweat resistance is also a weakness. Samsung has stuck with an IPX2 rating when other companies are offering IPX4 or better. If you’re a heavy sweater or you run in the rain often, this compromise might come back to bite you down the line.

And while Samsung has tried to lure in iPhone owners with its new app, I’d still recommend these solely to the Android crowd. I noticed more disconnects and dropped audio than usual on my iPhone 11 Pro Max, and these problems didn’t surface when using a Pixel 4 XL or Galaxy S10.

If you are on Android, it’s a tough choice between these and the Jabra Elite 75t earbuds. The Jabras definitely edge out Samsung on audio, with livelier and more bass-heavy sound output and better water resistance. But I have a much easier time recommending the Galaxy Buds Plus than I ever did Samsung’s first true wireless earbuds. Their stamina alone will be the big selling factor for some people, I’m sure.

Samsung has improved upon those original Galaxy Buds to an impressive degree, and the “Plus” name here is well deserved. The reengineered insides make for better sound quality, they’ve now got the longest-lasting battery life around, and the voice call woes are history. Yes, $200 earbuds still outperform them — as they should — and Samsung’s exclusion of noise cancellation might disappoint some. But if the company adds that to the mix for an eventual third-generation version, the next Galaxy Buds will be tough to beat.