The Vaio SX12 offers too little for too much

It’s the lightest hexa-core laptop you can buy

Share All sharing options for: The Vaio SX12 offers too little for too much

There are a lot of really light laptops you can buy. You’ve got the 2.6-pound Asus ZenBook 13, the 2.4-pound ThinkPad X1 Carbon, the two-pound LG Gram 14, the 1.96-pound Acer Swift 7, and countless others competing for dominion of the ultra-light laptop world. But you’re always sacrificing something for such a thin build — be it durability, performance, cooling, connectivity, battery life, or (often) many of the above.

Vaio doesn’t make the lightest laptops on the market, but it aspires to make the lightest laptops that ask for the fewest sacrifices. Last year’s SX12 and SX14 came out swinging with a truly astonishing array of ports. (“Just look at everything you can plug in!” observed Verge editor Sam Byford.) It was evidence that a sub-two-pound laptop could, in fact, wield the same connectivity as much heftier machines.

Our review of Vaio SX12 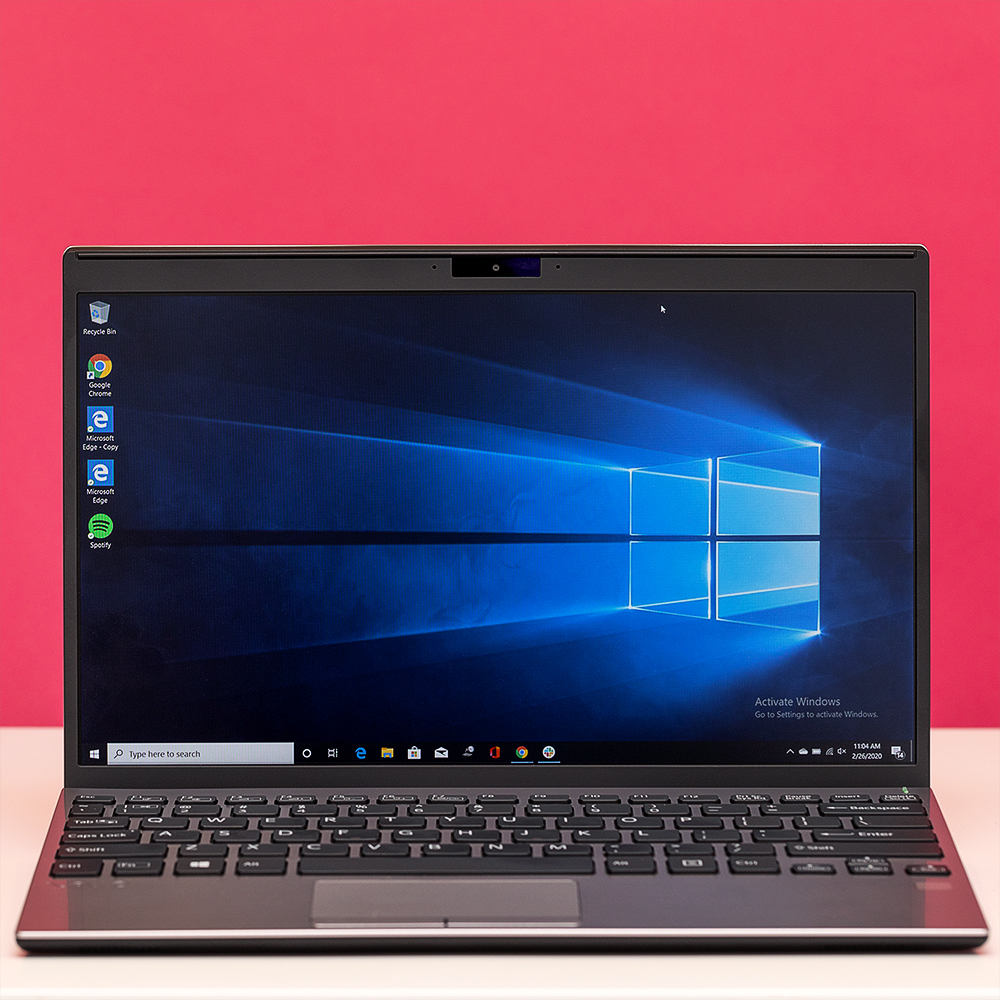 The refreshed SX12 has an additional claim to fame: while future releases may reclaim the title this year, the Vaio is currently the lightest laptop you can buy with a hexa-core chip. Specifically, it has an Intel Core i7-10710U processor. Six cores, 12 threads.

More cores don’t always make a better laptop; plenty of factors impact performance, including cooling, clock speeds, architecture, and the nature of the task you’re doing. But I found that the SX12 had no trouble with a heavy business workload, and it was able to keep itself cool, albeit loudly. It works impressively well for a thin laptop. But from a minuscule touchpad to antiquated ports to an underwhelming display, the SX12 has enough hardware limitations that it’s just not good enough to make me want to spend $1,600.

The SX12’s standout feature, as was the case last year, is its array of ports. You’ve got — buckle up — an Ethernet port, a non-Thunderbolt USB-C, a USB 3.1, two USB 3.0, an HDMI port, an audio jack, an SD-card slot, and a VGA port. That’s a lot of connectivity in an era when other laptop makers are pushing USB-C for everything.

I’ll begrudgingly give Vaio credit for the selection. You can technically plug many more things into the SX12 than you can in many bigger laptops. And I understand that the VGA and HDMI are big pluses for some customers, particularly business users and anyone outside the US.

Personally, though, I would trade the VGA and the two USB 3.0 for an additional USB-C that supports Thunderbolt 3. Even if your office doesn’t use modern peripherals now, they’re growing more ubiquitous every year; it’s future-proofing, if nothing else.

The SX12’s other standout feature is its build. It weighs just over two pounds. Carrying it feels like carrying nothing (and I am not at all swole). You could easily stick this in your purse or bag; it’s only a bit heavier than Microsoft’s Surface Pro 7 and Surface Pro X.

But despite its weight, the SX12 just doesn’t quite feel like a $1,600 ultrabook. There’s notable flex in the screen and the keyboard, and the silver lid had visible fingerprint smudges after just a few days of use. The laptop is made of a combination of carbon fiber, magnesium alloy, and aluminum, but it all feels like cheap plastic to me — I felt like I was using a toy. The thick top bezel doesn’t help either.

As is becoming the norm with ultralight notebooks, the SX12’s lid folds under its deck and lifts the back end a few millimeters off the ground when open. This is supposed to help with cooling and also, conveniently, hides a good chunk of the display’s large bottom bezel. I didn’t find that particularly unpleasant in my lap, but I know some people do. Take note if you are among them.

When I saw the SX12’s weight, I expected it would swelter. But the single fan did a surprisingly good job. The laptop was barely warm during my normal workday, in which I puttered around with up to 12 Chrome tabs, Slack, and occasional Spotify use. It took 43 Chrome tabs and three YouTube videos on top of Slack and Spotify before I felt heat from the chassis on my lap. Even then, the laptop was still very usable; the wrist rests and keyboard remained cool. The fan got quite loud when I was running anything remotely demanding (such as, you know, Google Chrome), but you can enable “Silence” mode in the Vaio Control Center if that bothers you.

Unsurprisingly, the i7 has the horsepower for whatever multitasking your workday might demand. I was able to run over 50 Chrome tabs, Slack, Spotify, and multiple Twitch streams with no slowdown. Of course, given the lack of a discrete GPU and Thunderbolt 3, anyone looking to do creative work or gaming should steer clear.

But my favorite aspect of the SX12 is the keyboard. It’s one of my favorite keyboards that I’ve tested in the past year. It stretches almost from edge to edge, and it doesn’t feel nearly as cramped as many ultrabook keyboards do. It’s snappy without being obnoxiously loud. I felt like my fingers were flying when I typed, and I easily cleared 135 words per minute on speed tests, which is above my average pace.

But while there’s clearly a lot to like about the SX12, I just didn’t enjoy using it, and I’m happy I don’t have to anymore. The primary reason is — hear me out — the touchpad.

I often nitpick about touchpads in reviews, and it doesn’t usually impact my final score much. But this touchpad was so terrible that it hindered the entire experience. It’s accurate, but it’s just too small. I have the tiniest fingers of anyone I know, and precision gestures were still tricky to pull off; zooming was a chore, and every time I tried to scroll, I hit the chassis almost immediately.

As with other Windows 10 computers, the Vaio SX12 presents you with multiple things to agree to or decline upon setup.

Add it all up, and you have five mandatory agreements and 13 optional ones.

What’s even more annoying is that the touchpad doesn’t actually click; you have to jump down to hit discrete buttons on the bottom. This means you’re looking at a lot of hopping back and forth between the pad and the buttons, devoting two fingers to what is a one-finger job on other laptops in this category, or a life full of tapping. This is compounded by the fact that the clickers are stiff and wholly unpleasant to use.

I understand that you might be using a mouse anyway — more power to you — but a major part of the SX12’s appeal is its portability. And if you’re buying a laptop this thin, I expect you plan to use it on the go. Yes, you can carry a mouse around and whip it out when necessary, but you shouldn’t have to — at least, not for a $1,600 laptop.

The other aspect of the SX12 that trips me up is the display. Despite having a matte finish, it still kicks back some intrusive glare in bright settings, though not as much as you’ll get from a glossy panel. Colors were fine, but not great; faces in bright settings were a bit washed out, and some grays and blacks were grainy, but I wouldn’t have noticed those imperfections if I wasn’t looking for them.

My main issue is that a 12.5-inch screen with a 16:9 aspect ratio is far too small and cramped. I couldn’t feasibly use two windows side by side, Chrome tabs got tiny very quickly, and watching videos felt like watching on the back of an airplane seat. 3:2 displays, such as those on the 13-inch Surface Book 2 and Huawei’s MateBook 13, make better use of their small screen space. But the SX12 just feels really cramped. As Verge editor Dan Seifert put it, “It’s time for the 16:9 screen to die.” A monitor helps but, again, the whole point of this laptop is that it’s supposed to be easy to carry around.

Other stuff: the SX12 supports Windows Hello with a fingerprint sensor below the arrow keys. (Thank god it didn’t try to fit that on the touchpad.) The 720p webcam also supports Windows Hello facial recognition, which previous SX models have not. The speakers are not good, as is par for the course with ultrabook speakers. They sound similar to the speakers on my old iPhone 8 Plus: tinny, bass-less, and not very loud.

Finally, battery life. Vaio claimed at launch that the SX12 would last up to 13.5 hours on a charge. I didn’t get nearly that much; my unit made it through 5.5 to six hours of my typical workload (nine to 12 Chrome tabs, Slack, and occasional Spotify and video streaming) on the default battery profile at 50 percent brightness. That’s better than last year’s SX14, which couldn’t even hit five hours in our testing, but it’s not a number that blows me away.

It’s also difficult to get the SX12 to fully charge, thanks to a technology it uses called Hybrid Power Boost. To maximize performance during peak loads, the laptop draws power from both the battery and the AC adapter. It’s essentially a failsafe for instances when the provided adapter can’t fully power a machine’s CPU. In practice, this meant that I couldn’t get the battery to 100 percent if I had Chrome open in any capacity; it was perpetually stuck at 99 percent, even at the device’s lowest battery profile. This didn’t impact my user experience much (the difference between 99 percent and 100 percent is small, obviously), but it illustrates the limitations that underpowered hardware can place on a high-end chip.

This laptop checks most of the boxes for being a laptop you should buy. It’s a standout when it comes to connectivity (though you can take your own view on Vaio’s ports of choice), and it deserves credit for being the first in its weight class with six cores. It has good specs, good performance, a comfortable keyboard, and it keeps itself cool, albeit loudly.

But the awful touchpad, the cramped display, and lack of a Thunderbolt 3 port that could help alleviate those problems are deal-breakers for me. The SX12 did everything I needed it to, but it wasn’t fun to use. I might tolerate that in a sub-$1,000 notebook, but at $1,600, you shouldn’t have to make those compromises.