A basic bendable that’s tough to beat for the price

Share All sharing options for: Lenovo Yoga C740 review: par for the course

I’m going to come right out and say it: Lenovo Yogas are boring. The other day, I asked on Twitter if there were any actual Lenovo Yoga fans out there. I got a smattering of responses from members of the large and active ThinkPad fandom who also don’t mind Yogas, and a few other folks who admitted that they liked certain aspects of Yogas they’ve tried. But there was a clear lack of excitement around them.

I think this is partially because throughout the line’s seven-year history, there’s never been a standout feature that distinguishes Yogas from the pack. HP’s recent Envy x360s are known for their displays, the portability of the Surface Pro line can’t be beaten, Acer’s Swift models are impossibly light, the Asus’ ZenBook Flip 14 has a discrete GPU, and Dell’s XPS 13 is, well, excellent all around.

There’s nothing terrible about any of the recent Yoga models, but there’s also nothing in particular to stan. I was hoping this might be the year we saw a Yoga that offered something innovative or different for me to get behind. Lenovo did this with its $999 Yoga C940, sticking an excellent soundbar in the laptop’s one-piece hinge. But the C740, the C940’s lower-cost sibling, is an incremental upgrade from its predecessor, the 13.3-inch Yoga 730. That doesn’t make it a bad laptop. It’s a good one. But as competing 2-in-1s get better and better, the C740 has fallen behind. 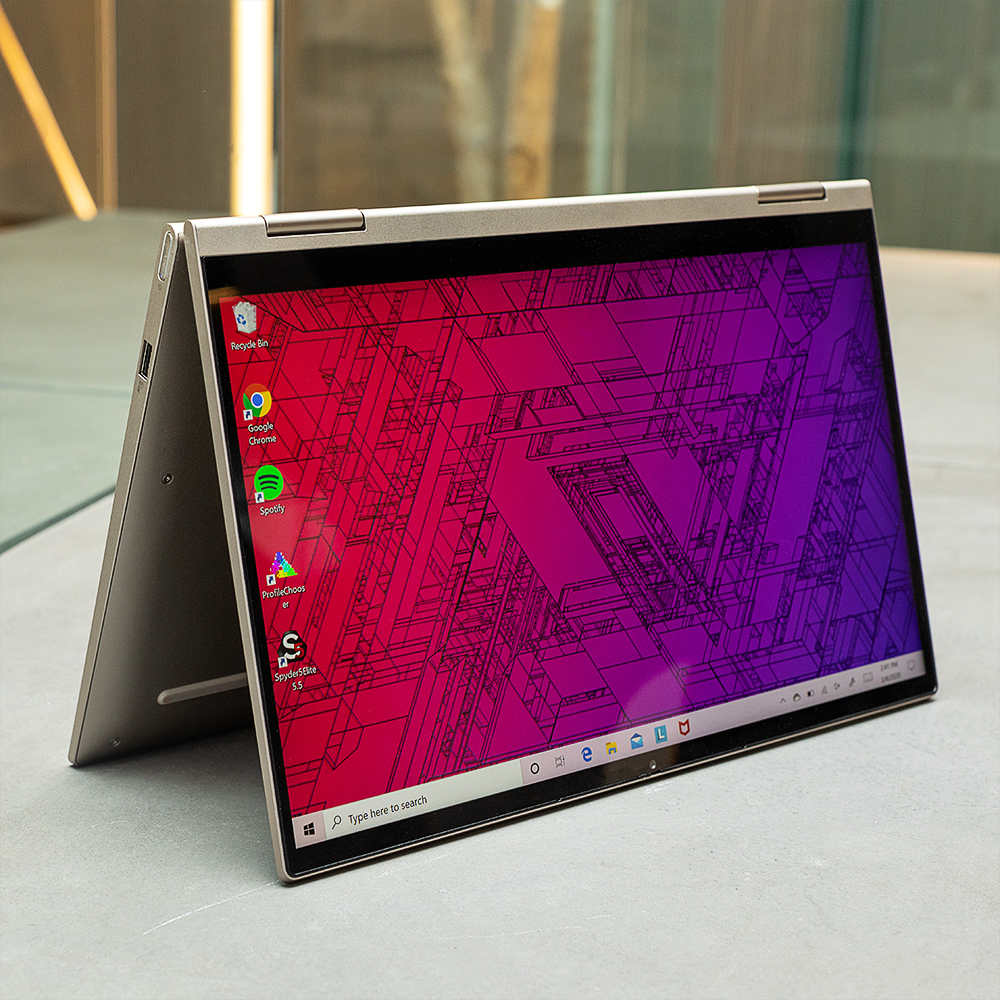 Apart from the refreshed processor inside, the C740’s most noticeable upgrade comes in design. It has a wider screen than the 730 did, and there are now speaker grills on each side of the keyboard. At 14 inches and weighing three pounds, it’s still on the portable side, though a bit too heavy to use extensively as a tablet; I was tired after a few minutes of holding it in one arm while drawing a picture. I think the build is what feels most “Ultrabook”-y about this laptop: there’s a bit of flex in the screen and keyboard deck, but not nearly as much as I generally experience on “budget” devices. The C740 feels sturdy and while both color options are a little drab (gray or silver), the chassis looks well-made.

It looks somewhat similar to the Yoga C940, though it’s missing a few of the flagship’s fancier features. Mainly, it loses the 4K display, doesn’t come with a stylus, and lacks the soundbar in the hinge.

On the sides, you’ll find two USB-C 3.1 ports, as well as one USB 3.1 Type-A and a headphone jack. That’s not a ton of connectivity, and it’s made worse by a lack of Thunderbolt 3, though the omission is forgivable on a sub-$1,000 machine. It would’ve been nice to have an HDMI port or SD slot, at least.

The C740 with an i5 delivers adequate performance for business use or everyday browsing. I had no issue with my normal workload, which involved rotating between 20-ish Chrome tabs, running Slack, writing in Google Docs, and occasionally streaming Spotify or Netflix. I got up to 45 Chrome tabs, seven of which were running 1080p YouTube videos, before I noticed slowdown. The lack of a GPU precludes any demanding gaming, however.

As with other Windows 10 computers, the Lenovo Yoga C740 presents you with multiple things to agree to or decline upon setup.

Add it all up, and you have four mandatory agreements and 18 optional ones.

The C740 also never got particularly hot; about 15 minutes into a 1080p YouTube video, it was a bit toasty on the bottom, but not at all uncomfortable on my lap, and the keyboard, touchpad, and wrist rests stayed cool. The single fan produced a consistent whine that was audible but never distracting.

The 1080p touchscreen reached 298 nits of brightness in my testing, and it covers 97 percent of sRGB and 75 percent of Adobe color spaces. Those are adequate metrics for a computer at this price point, but they fall short for creative work. Colors generally looked good, with deep blacks making for a contrasty image. Unfortunately, the display is very glossy. Watching a video in a bright office space, I had trouble making out details in indoor and dark scenes because I could so clearly see my own reflection. I would not have wanted to use the C740 outside.

Lenovo is also using a 16:9 aspect ratio which — as I’ve mentioned in other reviews — is just cramped. Using two windows side by side was very difficult, even on the 14-inch screen. It’s not nearly as comfortable for productivity work as smaller 3:2 displays, such as the 13-inch Surface Book 2. This isn’t as much of a problem with a connected monitor, but the lack of Thunderbolt or HDMI makes that a hassle.

Battery life is yet another aspect that’s acceptable but not exceptional. On a balanced profile, I got just over six hours of business browsing, Slack, and Spotify at 50 percent brightness. That’s fine for a 2-in-1 at the C740’s price range, but other machines are faring better. We got between seven and eight hours out of the Surface Pro 7, which starts at just $749. Expect to charge the C740 during the day if you’re using it heavily, but it can coast through typical tasks.

USB-C makes charging less of a hassle. If you already have a USB-C cable for a Switch or a MacBook or something, you won’t need to also carry a proprietary brick. Lenovo’s charger took about two hours to fully juice the C740 up — again, acceptable, but not astounding.

That’s basically the theme of this laptop. The audio was surprisingly pleasant, with a nice surround-sound quality for a laptop speaker. The keyboard was comfortable and quick, but a bit shallow for my taste. The touchpad is a decent size and easy to click. Even the webcam is just fine, producing a serviceable picture with grainy lines. There’s some annoying bloatware, mostly from McAfee and Lenovo’s security center, but that’s unfortunately par for the course for Lenovo machines at this price. All in all, there’s not a lot to complain about, and also not a lot to enthusiastically praise.

The C740 is a good machine. You won’t do much better for less than $800. But before buying, I do recommend that you look into its competitors and see what you’re missing out on when you choose a laptop at this price. You’re giving up things like a standout screen, dedicated graphics, and a bundled stylus. If you can do without those, you’ll like the C740 quite a lot. But as other sub-$1,000 competitors continue to innovate, I hope that the budget Yoga line finds a way to keep up.