Share All sharing options for: This Xiaomi-backed smartwatch has incredible battery life

I have to admit that the fact that this watch is called the “Amazfit T-Rex” was a fairly major factor in my deciding to check it out. Who doesn’t want to say they have a T-Rex on their wrist? A bigger factor, though, was its manufacturer’s claims about the watch’s battery life, and I’m surprised to confirm that the T-Rex did not disappoint.

Amazfit watches and fitness trackers are made by Huami, which is a public company funded by Xiaomi as part of its broad ecosystem. Huami is also the manufacturer for Xiaomi-branded products like the Mi Band.

We’ve covered a few Amazfit products before, including one that looks just like an Apple Watch and another called the Verge that has no relation to us. The T-Rex is the company’s first rugged smartwatch, and at under $140 it’s intended to significantly undercut competitors from the likes of Garmin, albeit without advanced features like blood oxygen tracking.

Our review of Amazfit T-Rex 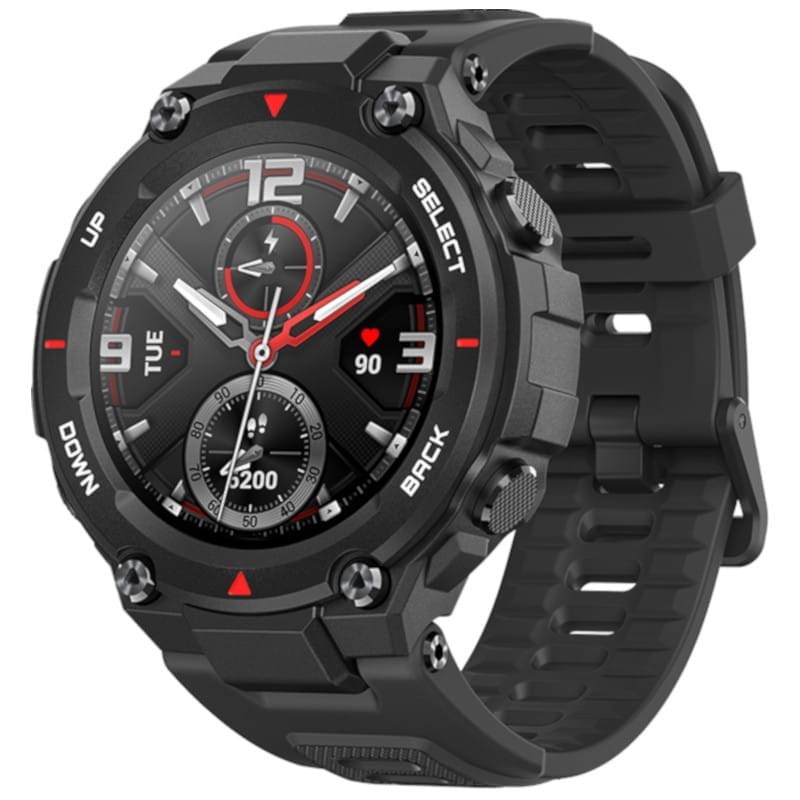 As you’d expect from the price, this isn’t the most premium device in the world, but it does feel pretty chunky and pulls off a reasonable G-Shock imitation. Huami says it has 12 military-grade certifications that let it be operated in temperatures between minus 40 to 70 degrees Celsius (minus 40 to 158 Fahrenheit) and underwater up to 50 meters (164 feet). The cheapest-feeling thing about it is the vibration motor, which doesn’t provide much in the way of satisfying haptic feedback.

You’re here to hear about the battery life; Huami promises 20 days of use with heart rate monitoring and sleep tracking always on. Does it achieve that? Well, I didn’t wear the T-Rex for quite that long, but I can believe it. The day it arrived, I charged it to 100 percent and put it on my wrist. A week later, it hadn’t left my wrist but was at 64 percent charge. A week after that, it was at 30 percent.

To be clear, this isn’t a basic fitness tracker or a hybrid watch — it’s a full-on smartwatch with a nice 1.3-inch OLED screen that I actually kept at a little higher than standard brightness because I found the auto setting too aggressive. (There is an always-on option that displays analog or digital time, though it’s off by default and unsurprisingly Huami says it’ll reduce battery life significantly.) It has GPS, an optical heart rate sensor, and pretty much everything you’d expect from a regular smartwatch. The battery capacity of 390mAh isn’t out of the ordinary, and it charges with a magnetic pogo-pin cable like many other watches.

I’ve previously never been too concerned about smartwatch battery life as long as it gets me through the day. After all, if I need to charge it a few times a week, I might as well just charge it every night — it’s not like I’ll use it for sleep tracking just some of the time. But battery life like this completely changes the equation. You just start thinking of the T-Rex as a regular watch that you’ll need to charge maybe once or twice a month. You almost never have to take it off. It’s great.

So, how did Huami achieve this? Well, assuming no mysterious price-efficiency breakthrough on the processor — which isn’t listed on the spec sheet — I figure it must be down to the software. Huami uses its own Amazfit operating system here rather than the notoriously power-thirsty Wear OS, and how much of a tradeoff that is for you will depend on what kind of a smartwatch user you are.

There is no third-party app ecosystem, for one thing. That doesn’t bother me too much except for the fact that you’re also stuck with the 30 preloaded watch faces, none of which are customizable and only a few of which include useful things like weather data. If you just want a bunch of G-Shock-inspired designs, that’s what you’ll find here. But coming from the Apple Watch or Wear OS, your options are pretty limited.

Elsewhere, the software itself is basic but functional. There are 13 trackable activities including swimming, cycling, climbing, elliptical, and so on. You can access things like workouts easily enough, but it takes a lot of swiping and button presses. Simple things like automatically showing playback controls when listening to music are missing. Notifications display just fine, but you don’t really have any way of interacting with them. The T-Rex leans heavily on the iOS or Android companion app for configuration; you can’t configure much on the watch itself.

I’d rather wear this than a Wear OS watch

I would not describe the Amazfit software as an advanced smartwatch OS, but it does the job well enough that the battery life tradeoff will probably be worth it for some people with more passive use cases like fitness tracking and notifications. Power users of more advanced smartwatches from the likes of Samsung or Apple will find it a clear step down.

But I’d rather wear this (or a less rugged version of it) than a Wear OS watch, honestly — the software isn’t that much more limited, and the power efficiency is a huge advantage. I’m not sure exactly how Huami is making its watches last this long, but if you want a cheap smartwatch with long battery life and don’t need particularly complex functionality, this one is worthy of consideration.

That said, the T-Rex seems to be hard to buy in the US right now. It was on sale on Amazon previously, but the page currently lists it as unavailable. A Huami representative tells The Verge that it’ll return “in the coming months or so.”