The non-Motorola Moto costs more than it should

Share All sharing options for: The Moto 360 (2019) is a familiar blend of good hardware and bad software

The third generation of the Moto 360, a Wear OS smartwatch that is, incidentally, no longer being made by Motorola, shipped a couple of months ago. While it is a perfectly serviceable smart watch with a lot going for it, there’s nothing about it that makes it stand out one way or the other — especially considering its comparatively high price.

This latest version of the Moto smartwatch is being produced by a company called eBuyNow, which, as reported by The Verge’s Dan Seifert, describes itself as “an independent, data-driven consumer electronics company.” that “work[s] with proprietary tools to identify precise gaps in the consumer electronics industry.” I’m not sure of the gap that the Moto 360 fills - there are a variety of Wear OS watches out there now that offer a range of prices and abilities.. 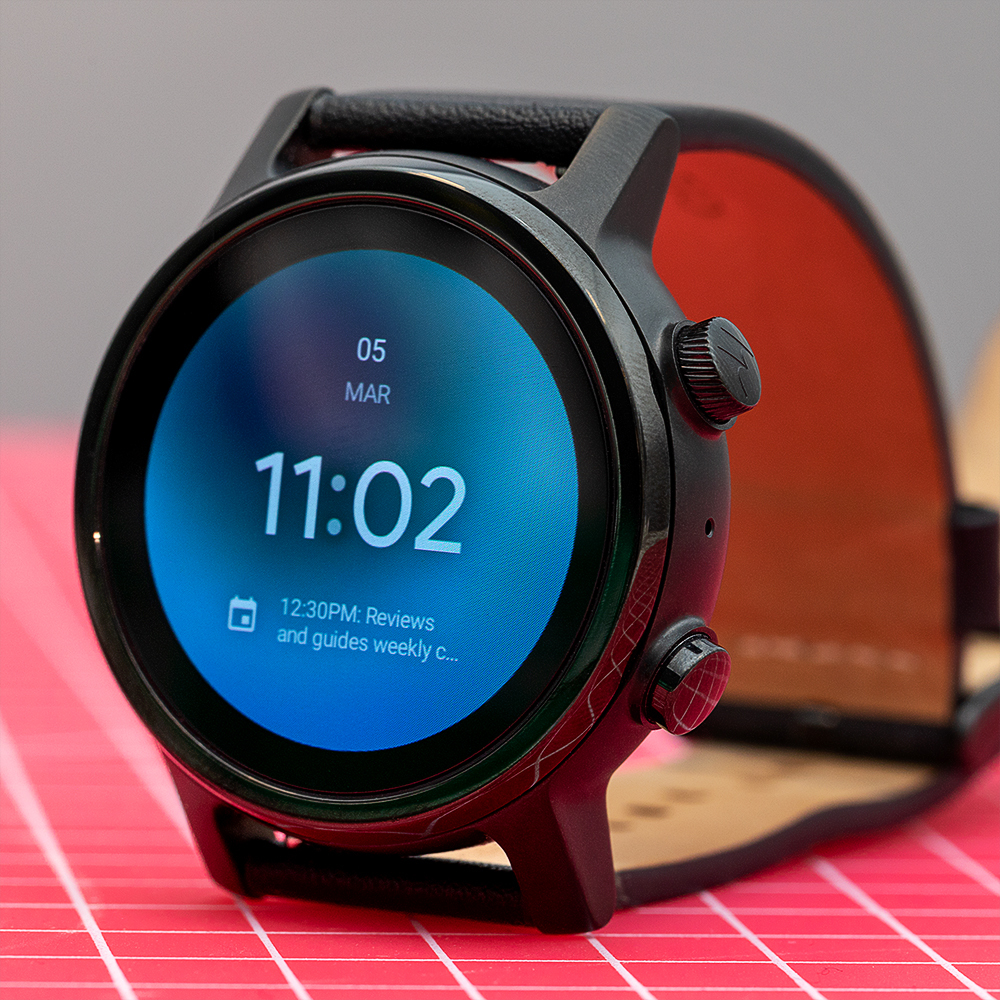 There’s nothing intrinsically wrong with the Moto 360. In fact, it is a handsome stainless steel watch that comes in three colors: gray, rose gold, and black; the review unit was the black version. It comes with two straps — leather and silicone — and the charging unit. The watch is not capable of wireless charging.

The Moto 360 has a 1.2-inch round OLED display; with the bezel, it measures 1.68 inches (42.8mm) across, with a width of 0.46 inches (11.68mm), making it slightly thicker than most other watches. It is completely round, lacking the “flat tire” look of older Moto 360s, which is an advantage. And it is not uncomfortable to wear; I have fairly slim wrists and didn’t find it at all troublesome (except for when I tried to pull it under tight-fitting long sleeves).

There are two buttons on the side of the watch. The top button toggles you to your home screen or the settings; it also works as a scroll control. I rather liked the way that worked, although someone with larger fingers may have a bit of trouble with it. The bottom button, meanwhile, can be configured to take you to almost any specific app.

As for the other specs: The watch is equipped with Qualcomm’s Snapdragon 3100 processor and comes with 1GB of RAM and 8GB of storage, all of which is comparable to other watches in its category. It has an always-on display that shows a simplified watch face when it’s not active. It’s got a 3ATM water-resistance rating, which means it’s splash resistant, but you don’t want to wear it when you go swimming. It also has a heart rate monitor, GPS, and NFC for mobile payments with Google Pay.

The Moto 360 has good lasting power; at the end of a working day, it usually had about 45 to 55 percent of charge left. As mentioned before, the Moto 360 doesn’t support wireless charging. Instead, you have to use a magnetic dock with pins. It is fairly simple to snap the phone into the charger, and easy enough to figure out the proper orientation; however, when the Moto 360 was in place, it was nearly impossible to balance it and the charger on a flat service. It did charge quickly though, taking a little over an hour to fill up from a nearly empty charge. So if you want to use the watch to monitor your sleep patterns, you can pop it into the charger for an hour during dinner and you should be good to go.

Which leads me to the apps — or, more specifically, to Wear OS. I’m usually very fond of operating systems that haven’t been tweaked by device manufacturers; it’s why I’ve pretty much stuck to phones that run as clean a version of Android as possible. But Wear OS may be the exception to that. For example, the Moto 360 offers less watch faces than, say, the Samsung Galaxy Watch Active 2, which is annoying. You can also choose from a reasonable number of fitness apps, a few games, a variety of productivity apps, and connections to some of your existing phone apps. (Of course, you can install more faces and apps from the Play Store, but sometimes it’s nice to see a range of original offerings in a watch.)

You can optionally also give access to your phone so you can:

And admittedly, on the whole, I had no trouble dealing with Wear OS. You swipe right to access Google Assistant; left to see your “tiles” — Google Fitness, the weather, or various others. I was able to track my walks, listen to Spotify, check my texts, the headlines, and who was calling without any trouble. However, in the end, Wear OS doesn’t have the slickness of Apple watchOS.

The question is: Is it worth the money? If you compare it to something like Samsung’s 40mm Active 2, then the Moto 360 doesn’t seem like much of a bargain. Samsung’s watch also features a 1.2-inch always-on OLED display with 5ATM water resistance (so you can go swimming with it). It offers slightly more RAM (1.5GB) and half the storage (4GB). It sells for about $280, while the third-gen Moto 360, at $350, costs $70 more.

When Dan Seifert tried out a pre-production unit back in October, he reported that the Moto 360 was a perfectly good Wear OS watch, but not worth the higher price. After trying it out for several weeks, I have to report that his first impression was not mistaken. This is a good watch which is comfortable to wear, has good battery life, and a decent range of features. But there’s nothing that sets it apart from other WearOS watches or the Galaxy Watch Active 2. Maybe that’s to be expected for a Moto 360 that isn’t even made by Motorola.