Logitech’s Combo Touch is the Magic Keyboard for everyone else

Add a keyboard and trackpad to an iPad or iPad Air

Share All sharing options for: Logitech’s Combo Touch is the Magic Keyboard for everyone else

The $149 Logitech Combo Touch is the case I’ve spent years waiting for — well, not this exact case, but the idea of a combination keyboard and touchpad that might turn my iPad into a laptop replacement. If you’ve been intrigued by Apple’s new Magic Keyboard for the 2018 and 2020 iPad Pro but own a different iPad model, Logitech is here for you.

Logitech sells two versions of the Combo Touch: one fitting the base 10.2-inch iPad and another for the third-generation (2019) Air and 10.5-inch (2017) Pro. I’ve been using the version for the iPad Pro for this review.

Our review of Logitech Combo Touch 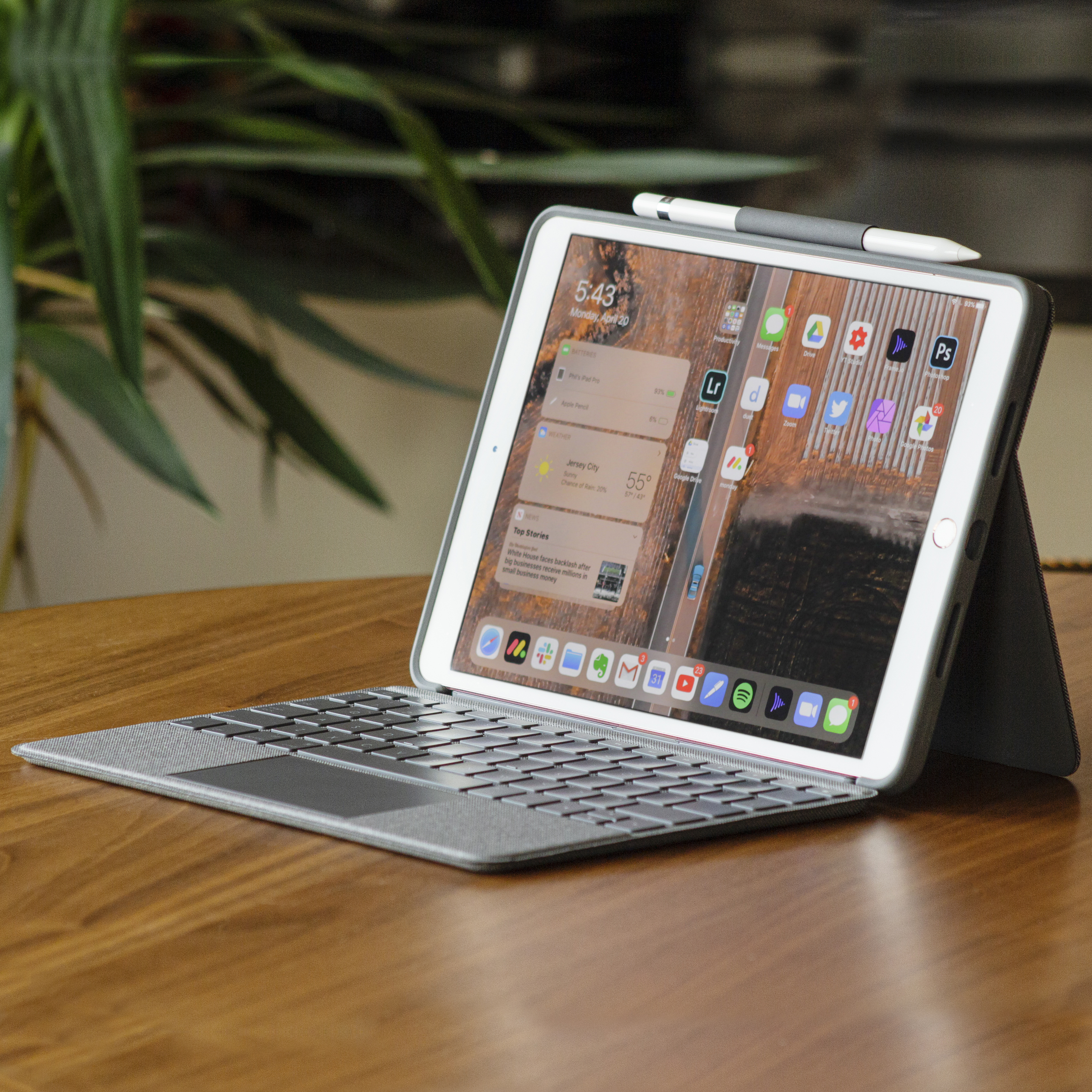 The first thing I noticed about this case is its size: it’s thick. The overall footprint of the iPad doesn’t change much with the case on, but the whole thing when closed is 0.85 inches (or 0.89 inches for the 10.2-inch version), which is thicker than a closed MacBook Pro. It also looks a little juvenile, like a case you’d find on a fleet of classroom iPads as opposed to something designed for my iPad Professional.

Logitech managed to keep the weight relatively down at 1.34 pounds for the case (2.37 pounds including my iPad Pro). For reference, the new MacBook Air weighs 2.8 pounds.

If I could choose between the two, having a lighter case is more noticeable than the added thickness

Removing the iPad from the case is not too difficult, but it will require a little force to pull it out of the heavy rubber corners. It’s clear the design is meant for you to leave it in the case all the time and just deal with the added bulk on the iPad, with the benefit of having some drop protection.

The case is wrapped in a textured gray finish with thick rubber bezels that surround the iPad. There are wide cutouts for the Lightning port, microphones, and headphone jack, plus cutouts for the two additional speakers on the Pro. The volume and power buttons are covered by the rubber surrounding and require a decent amount of force to register a click. Finally, there’s a loop on the side that holds the Apple Pencil snugly in place. Logitech says its Crayon stylus will fit there as well.

If you remove the keyboard, the iPad lays flat on a table, which is great if you draw or handwrite notes. It doesn’t feel clumsy to use without the keyboard attached, and the hinge is still accessible to watch movies or video chat. The left side of the iPad will be exposed, but the rubber bezels are thick enough to keep the side lifted off the surface. Unfortunately, there is nowhere to put the keyboard when it’s not in use. It doesn’t fold backward or magnetically attach to the back of the iPad. It’s not a huge issue, but it seems odd to have the keyboard just laying around if you want to use the iPad like an iPad.

When you do use the keyboard, it magnetically snaps into place and starts working immediately. There’s no Bluetooth pairing, power buttons, or charging. It just works, thanks to Logitech’s use of the Smart Connector built into the side of the iPad. The Microsoft Surface-style kickstand offers a 40-degree range (120 to 160 degrees) of tilt, which is more than I’d ever need. The hinge is free-flowing, too; there are no hard stopping points. There’s some wobble in the hinge when you adjust it, but it never sagged or moved on its own.

Similar to the Microsoft Surface, the case has a long footprint when the hinge and keyboard are in use. I measured about 12 inches for a “normal” viewing angle. Though I haven’t been able to test this specifically, using the keyboard on a plane’s tray table or small surface is unlikely to work comfortably.

Typing on the keyboard is great. It’s backlit with keys that are well spaced and have 1mm of travel. It even has a row of function keys for adjusting brightness, volume, and so on, something Apple doesn’t provide on its own keyboards. The layout is smaller than a traditional keyboard, with each key slightly shrunk down, but after a few minutes of typing, I was able to adjust. There’s a companion app for controlling the duration and fade of the keyboard backlighting, which is clumsy, but not necessary to use if you don’t care about adjusting those things.

Your palms rest on the same gray material that surrounds the case. While it looks like it has a soft finish, it feels more like woven nylon. I didn’t find it uncomfortable, even after a few hours of typing, and I’d expect this material to hold up well over time. The sides around the keyboard are tapered, which leads to relatively sharp edges. If you have larger hands, you might find those sharp edges around the keyboard a bit irritating.

The keyboard deck is very sturdy, which makes the Combo Touch surprisingly easy to use on your lap. The keyboard lays flat, unlike the Surface keyboard, which is lifted a few degrees and snaps to the front of the tablet. There’s enough play in the material between the connector and the keyboard deck to keep the keyboard from disconnecting if you wobble it too hard. It works fine, but it still feels like a balancing act. You will have a much better time using this on a table or desk.

If the bulky design and fabric-esque material were signs of a product made by a third party, the trackpad would have you thinking otherwise

It’s fantastic. Every move, gesture, and click is just delightful. Unlike the Brydge case, all of the multifinger navigation gestures Apple introduced in iPadOS 13.4 work as they should on the Combo Touch. That’s likely thanks to Logitech working closely with Apple to develop this product.

My one real gripe about the trackpad is the clicking mechanism. Like most Windows laptops, only the bottom half clicks, and it tapers off toward the top. There is an option to use tap to click, but I don’t like to use that because I’d prefer to actually press the trackpad and avoid accidental taps. I mostly got used to it, but I’m still occasionally jamming my thumb into the top of the trackpad trying to click.

Right now, there are only a handful of cases like the Combo Touch on the market. The $199-and-up Brydge Pro Plus will give you the closest physical resemblance to a laptop, while sacrificing most of the new iPadOS gestures. Apple’s own $299-and-up Magic Keyboard forgoes a function row but floats the iPad above your fingers. The biggest problem with both of these cases is they only support the 2018 and 2020 iPad Pro.

If you have an older iPad or one of the lower-cost models, the Combo Touch is basically the only game in town. Fortunately, it’s very competent, with only a handful of drawbacks. At $150, it’s not cheap, especially if you’re pairing it with the base $329 iPad. But if you’re looking to use your iPad as a laptop, it gets the job done.

Photography by Phil Esposito / The Verge