London-based Gocycle is your regular reminder that not all electric bikes are equal.

Electric bike sales are exploding worldwide as people look for alternatives to public transportation in an age of social distancing. Elderly riders in Europe discovered long ago that basic e-bikes can extend their mobility and independence well before young urban professionals began flocking to nicely designed electric bikes for a greener, healthier commute. City e-bikes are also catching on in bicycle-obsessed places like Berlin, Copenhagen, and Amsterdam where electric motors assist parents trying to pedal home on two-wheelers loaded with children and groceries. Electric cargo bikes now carry entire families in addition to goods. The e-bike market is clearly evolving, leaving plenty of room for market segmentation.

The Gocycle GXi isn’t for everybody. Nobody strictly needs a million-dollar hypercar either, but lots of people want one.

Our review of Gocycle GXi 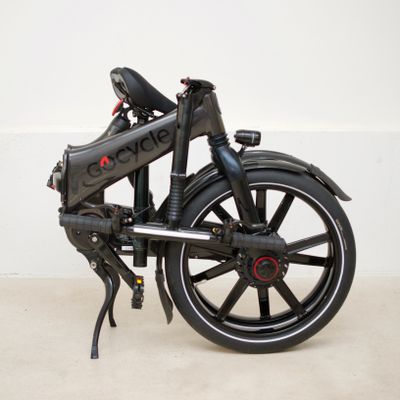 Let me begin by saying that the Gocycle GXi is one of the most advanced e-bikes that money can buy. It’s exactly what you’d expect from Gocycle, a company founded by a former design engineer for McLaren cars.

The new Gocycle GXi marries the performance of the company’s flagship G3 model with the 10-second-folding capabilities of the GX model I reviewed last year. As such, all of the things I loved about the GX — attention to design and suitability for long or last-mile commutes — carry over to the GXi as well.

I tested the ultra-premium Gocycle for almost two months, putting about 400 km (250 miles) on the odometer, often riding 17 km / 10.6 miles in a single stretch or twice that to return home with about 10 percent battery remaining in the tank. I set up the GXi in US mode (despite living in Europe), allowing me to access 500W of power and a max speed of 32 km/h (20 mph), something I only unleashed well outside of the Amsterdam city limits.

The GXi’s biggest advancement over the GX is the electronic three-speed borrowed from the G3. It employs what Gocycle calls “Predictive Shifting,” replacing the manual Shimano Nexus shifter found on the GX. I have mixed feelings about the “predictive” bit. For the most part, it works, deftly shifting to a higher or lower gear as needed. It does require a slight pause between downstrokes to allow the internal gear hub to complete the shift, which is disconcerting at first. But soon, I was riding and shifting in easy rhythm with the bike.

Predictive Shifting was less successful at anticipating my desired gear selection when riding in lots of unpredictable stop-and-go traffic or when trying to manage my cadence while riding alongside another bicyclist. Fortunately, a twist switch on the right-hand grip can be used to override any errant gear selection as needed. You simply roll the switch up or down to shift gears. You can turn Predictive Shift off completely, though that requires a rather convoluted process of throttle and shifter maneuvers instead of just a toggling a switch in the app. Despite its faults, I’d rather have it on than off.

Speaking of the app, I tried to avoid it, as I did when I tested the GX. I guess it’s slightly less buggy than the last time I looked at it, making it easier to endlessly tune the power-delivery profiles. (I mostly rode in the default City+ profile.) While it does a good job of walking new owners through all of the bike’s features, the clunky design is incongruent with the premium bike you’ve just purchased, sullying the otherwise delightful unboxing and assembly experience. The app can also serve as a dashboard when turned sideways into landscape mode and attached to the handlebar using Gocycle’s crude but effective mounting bands.

Overall, the ride is fun, fast, and looks fine as hell, thanks in part to those chunky hub-mounted magnesium wheels. And you won’t find a single exposed cable to interrupt the clean lines. Even the desperately large Gocycle wordmark disappears into my black GXi’s frame. I receive more spontaneous compliments riding Gocycles than any other e-bikes I’ve ridden, which is saying a lot here in Amsterdam, the bicycle capital of the world.

Innovations that once felt futuristic are at risk of becoming pedestrian

Still, I can’t help but think that Gocycle innovation has slowed. The GXi adopts features found in Gocycle’s G3, which was launched in 2016, and built upon the electronic shifting features carried over from 2012’s G2. I’m currently testing an unannounced e-bike (more on that soon) that shifts more smoothly, intuitively, without all of the GXi’s noise, and with a similarly small front-hub motor that feels just as powerful.

My point is this: technical innovations that once made Gocycle feel futuristic are at risk of becoming pedestrian on bikes that cost half as much.

Is a McLaren hypercar worth $1 million? To me, no. But to a certain class of people, it is. Similarly, some people will pay three times more for a Leica camera even though it doesn’t take photos any better than a Sony. In both of these cases, you’re not just buying the product, you’re paying to be associated with what it represents. Unfortunately, the 11-year-old Gocycle brand hasn’t earned McLaren or Leica status yet.

Is the Gocycle GXi a great e-bike? Yes, absolutely. It’s the most sophisticated folding e-bike you can buy right now. It’s certainly unique. And for some, those two reasons might justify a purchase at any price.