A great concept and a so-so laptop

There is one — and only one — reason to buy the Asus ZenBook Duo. If you’ve seen a picture, you know what that reason is: there are two screens.

Specifically, there’s the primary display, a 14-inch 1080p matte screen. There’s also another display, a 12.6-inch IPS panel called the ScreenPad 2.0, built into the top half of the lower deck. Both are touch-enabled, and both support Asus’ active stylus. It’s sort of hard to explain what this looks like; you’ll get it once you see it.

Our review of Asus ZenBook Duo 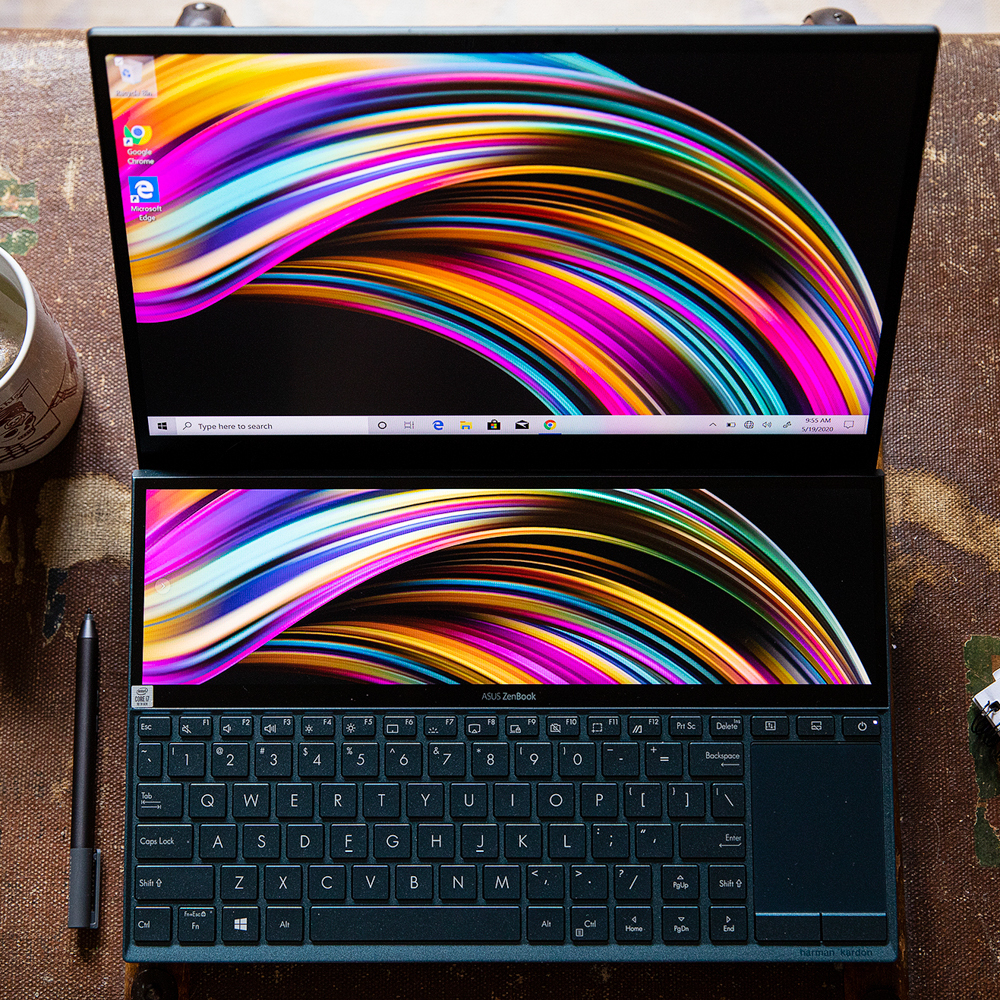 The $1,499 ZenBook Duo isn’t quite the only laptop like this — last year’s ZenBook Pro Duo (of which this is a pared-down, portable version) offers the two-screen setup in a $2,500 workstation form, and some similar concepts, such as Lenovo’s ThinkPad X1 Fold, are slated for release later this year. For the moment, though, the ZenBook Duo is the best laptop for most users who want more than one display.

Just be sure you really want the extra screen because the trade-offs you have to make are significant.

Unlike the MacBook Pro’s Touch Bar, or previous ZenBooks like the Pro 15 that have experimented with touchscreen trackpads, the ScreenPad has a number of obvious use cases, and they work as well as they should.

I mostly kept distractions like Slack, Twitter, and Spotify on the bottom screen so they were out of my way while I did my primary work on the top, but I also sometimes kept notes or other information down there for reference. You can easily message a friend while watching Netflix, edit video with the timeline on the bottom, or stream a YouTube tutorial on the bottom while running a game up top. I’m sure you can see your own uses for this; it’s like having a miniature, built-in monitor. Note, though, that the ScreenPad is small and has a very narrow aspect ratio, making it best suited to running streams in the background or stealing a glance at Twitter here and there; reading in depth or doing any actual work on it is pretty cramped.

In Asus’ Launcher menu, which you open by tapping the left side of the ScreenPad, you can access a handful of nifty features that take advantage of the Duo’s form factor (as well as adjust the ScreenPad’s brightness and lock and unlock the keyboard). There are a couple apps, including Quick Key (where you can access shortcuts to commands like cut, copy, and paste), Number Key (which pulls up a virtual numpad), and Handwriting (where you can scribble with the stylus and the text will show up wherever your cursor is — it’s quite accurate). You can create “task groups” of up to five apps or tabs (two on the main screen and three on the ScreenPad), which you can then open up later with a single click. And you can add whatever apps you want to the Launcher’s main menu, so it can function as a secondary dock.

Moving apps from one screen to the other is as easy as moving them to an external monitor. But there are some neat tricks, too. Whenever you click and drag a window, a small menu pops up with options to send it to the opposite display, pin it to the Launcher, or extend it to occupy both screens. There’s also a handy button above the touchpad that immediately swaps the contents of your top and bottom screen and automatically resizes them to fit.

To use the ZenBook Duo, you have to agree to:

The only ScreenPad feature I ended up using frequently was task groups — I made a group of “work” tabs to open in the morning and a group of “leisure” tabs to open at night. But everything else did work as advertised. The main takeaway here is that Asus has done the work. The ScreenPad isn’t a gimmick; it’s useful.

That said, there are problems.

For one, the keyboard deck is an uncomfortable location for a screen. You have to crane your head downward to read anything on the ScreenPad — the back of my neck was sore after a full day of using the Duo.

Then, there are trade-offs you have to make to achieve this form factor. For one, I never realized how nice wrist rests are until I had to use this laptop, which doesn’t have any. I felt like a T. rex using this on my couch, with my arms crunched against my stomach. There’s also the ErgoLift hinge which props the ScreenPad off the ground at an angle. I don’t usually have a problem holding fold-under hinges on my lap, but this one is quite sharp. It was so uncomfortable that while I worked on the couch, I ended up holding the Duo between my knees. You really want to stick with using this laptop on a table or desk, not your actual lap.

And then there’s the touchpad which, thanks to the ScreenPad, has been crammed into the bottom right corner of the keyboard deck. It’s useless. It’s too small (2.1 x 2.7 inches) to realistically use for precision gestures or to scroll without quickly hitting the chassis. (Also, good luck if you’re left-handed). I don’t like to use third-party peripherals in my review process, but if I’d just purchased the Duo, I would have immediately plugged in a mouse and never looked back. I ended up using Asus’ stylus (which is smooth and quite responsive) for much of my daily work and almost all of my scrolling. I wonder if it’s even worth having a touchpad on this device; I seriously cannot imagine anyone using this one regularly.

In terms of standard “laptop stuff,” the Duo is a capable computer, but there’s nothing that will blow you out of the water — again, the ScreenPad is the reason to buy it.

I have the only currently available configuration, which is $1,499 and comes with Intel’s quad-core Core i7-10510U processor, 16GB of RAM, and a Nvidia GeForce MX250 GPU. The system was just fine for my daily load of Chrome tabs, Spotify streaming, Slack, YouTube, and other tasks. The midrange Comet Lake CPU isn’t the best choice for encoding videos or other demanding creative tasks, however — most power users will be better suited to the ZenBook Pro Duo, which comes with an eight-core Core i9-9980HK and a more powerful graphics card. The Duo’s battery life was surprisingly good, given that it has to juice two screens. I got just over 10 hours of web browsing on the Battery Saver profile with both panels at medium brightness. And the machine kept itself decently cool throughout testing (just the bottom got occasionally toasty). The fans only fired up during gaming, and you can turn on a Silent profile in Asus’ control center if they bother you.

The Duo is far from a gaming machine

Ports get a passing grade: there’s a USB 3.1 Type-A port, a microSD card slot, and an audio jack on the right, as well as an HDMI, another USB 3.1 Type-A, a power port, and a USB-C. No Thunderbolt 3, though, which is a glaring omission on a $1,499 laptop, ScreenPad or no ScreenPad.

Finally, the Duo is far from a gaming machine. As GPUs go, the MX250 is close to the bottom of the barrel. Integrated graphics on many modern processors (including Intel’s Iris Plus that comes with the Ice Lake generation, and the new Vega graphics in the AMD’s Ryzen 4000 mobile series) perform comparably — so buying laptops with underpowered graphics cards is making less and less sense.

That was reflected in my testing. The Duo only managed an average of 26fps on Civilization VI’s highest settings. (I got 40fps bumping it down to medium). Those are better frame rates than you might get with integrated graphics, but they’re certainly nothing to write home about. The MX250 feels like a bit of a half measure to me — either you want a GPU or you don’t. If you don’t want a GPU, then you don’t need an MX250; if you do want a GPU, I doubt you’ll be happy with these results.

The ScreenPad is handy for gaming, particularly if you want to keep a reference guide open or run a YouTube video while you play. Note, though, that when you click on the bottom display you’re essentially tabbing out of the game — audio stops, and you have to click back in to resume playing — so using the ScreenPad for operations like Discord chats or live-tweeting is a bit of a pain.

If you want to game on two screens, you might want to wait for Asus’ ROG Zephyrus Duo 15, a gaming-specific Duo that’s supposed to come out later this year and can be configured with up to an RTX 2080 Super. Asus says it’s working with developers to create special interfaces and controls suited to the dual-screen setup.

The truth is: I can’t see myself buying this computer. The cramped touchpad, the sharp hinge, and the lack of wrist rests just made it too uncomfortable to use. And the MX250’s incremental improvement over integrated graphics isn’t enough to tip the scales in its favor.

But if you’re looking specifically for a two-screen device, this one works. It’s more than a party trick; it’s useful and there are cool things you can do. But I think the form factor is better suited to a workstation (like the ZenBook Pro Duo) which is likely to spend most of its life at a desk with peripherals plugged in. I’m not sure if there’s a way to make a Duo that’s also good at being a portable laptop. If there is, Asus hasn’t quite found it.