V-Moda’s first noise-canceling headphones are built well and have balanced sound, but they fall short on features

Apple’s AirPods Max just might have ushered in a new norm of $500-plus wireless headphones. My argument in support of this? V-Moda’s new M-200 ANC headphones, which sell for $499.99 and, as the name makes obvious, are the company’s first headphones to include active noise cancellation. V-Moda is a company that’s well-known in the DJ world, and prior headphones like the original M100s and Crossfade 2 Wireless have earned it some fans in the audiophile crowd. With the M-200 ANCs, V-Moda is trying to compete in a higher price bracket than ever before — but the results are a little uneven.

If there’s one thing that V-Moda has never wavered on, it’s durability. Like past models, the M-200 ANC headphones feel phenomenally strong and reassuring no matter how harshly you handle them. These things are built like tanks. My old pair of M100s must be at least seven or eight years old at this point, but the folding joints and other core hardware have never given out — even long after the headband material has started to wear and show its age. I still use ‘em as a gaming headset with V-Moda’s add-on boom mic.

I think it’s fair to question whether this is the same V-Moda that it used to be; before the company was sold to Roland, I’d regularly sit down with founder Val Kolton, who seemed to hold the brand to an obsessive level of quality assurance. But so far, I don’t see any reason to question the robustness of these new headphones. 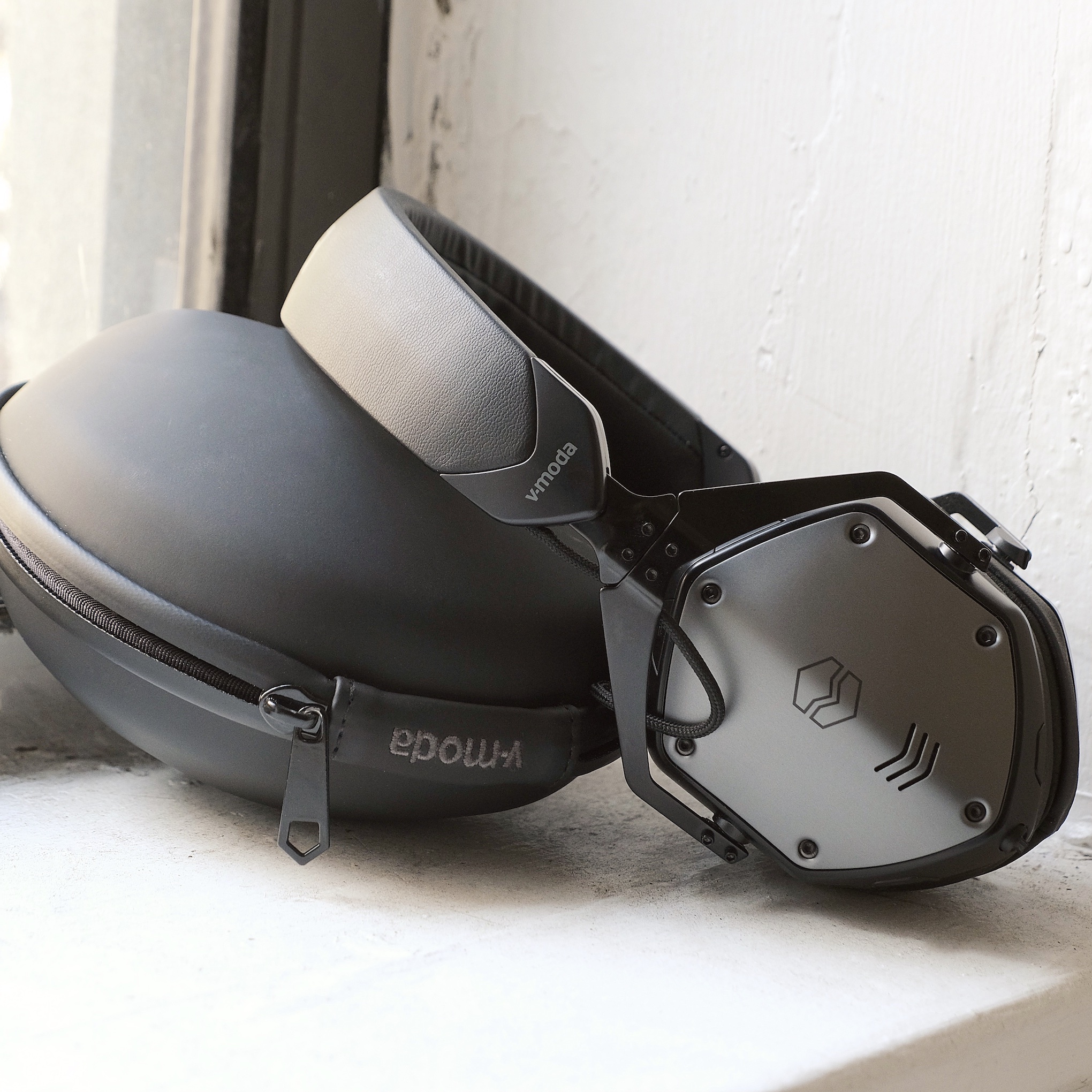 The M-200 ANCs stick with the usual V-Moda aesthetic: it’s mostly a mix of metal and artificial leather. They also still fold down into the company’s signature carrying case. However, the size of the shield plates on each ear cup has changed. So if you’ve got old, customized plates, those will no longer fit. The ear pads (filled with memory foam) now attach magnetically and feel nice and cushiony. It used to be that you had to buy V-Moda’s aftermarket “XL” earpads for the best extended comfort, but not so this time around. I’m also glad they’re so easy to replace. Magnets!

There are buttons at the top of the right ear cup for play / pause and volume controls, and this is where the M-200 ANCs start to betray their asking price. The buttons are mushy, which I can understand since that means they don’t click loudly as you’re listening to music. It can still feel a bit cheap. Aside from this, their location so far at the top can make them awkward to reach when you’re actually wearing the headphones. Maybe it’s just my enormous head, but I struggled at times. The buttons at the bottom for power and noise cancellation are much simpler to reach (and for some reason, they’re clickier, too).

Out of the box with EQ settings left untouched, the M-200 ANCs have an extremely neutral sound profile. I don’t know that I’d call them reference studio monitors, but they’re very flat. This can make for a jarring change if you’re switching over from other headphones like the AirPods Max or Sennheiser’s Momentum Wireless cans, which try to show you everything they’re sonically worth right off the bat without any adjustments. In this case, you’ll want to immediately explore the EQ presets (V-Moda’s app lets you take full manual control) to find something that sounds the best to you. Even if you crank the low-frequency sliders, the M-200 ANCs won’t rattle your brain. But you can get them to a point where EDM and hip-hop don’t underwhelm, which they can if you stick with the default, balanced EQ.

When you do take the time to nail the EQ, the M-200 ANCs sound very good. V-Moda downsized to 40-millimeter drivers (from 50mm in the original M-200), but these headphones do a terrific job of preserving the mids through all sorts of EQ adjustments. “$500 noise-canceling headphones with neutral sound” strikes me as an odd zone to be playing in, but V-Moda can certainly paint itself as a standout here. They support aptX HD, aptX, AAC, and SBC Bluetooth codecs, so they’re well-rounded for wireless audio. I also tested them wired with my Apple Lossless files and streaming Amazon Music HD, and the M-200 ANCs proved wonderfully layered and rich. (They don’t seem to pass audio over USB-C, unfortunately, so that port is just for charging.)

I’ve noticed that V-Moda’s app can be buggy; sometimes it’ll display a spinning loading indicator that never goes anywhere. The M-200 ANCs have also given me “iPhone can no longer connect to this device” errors, which required me to pair the headphones all over again. Roland needs to put more work into its software. Most frustrating of all is that the M-200 ANCs can only store two paired devices in memory. If you add a third, the first one will be overwritten. Want to switch between a phone, tablet, and PC without much fuss? Sorry.

These headphones don’t have a dedicated transparency mode that you can toggle on for hearing outside noise. But V-Moda did blatantly steal a trick from Sony: you can hold a hand on the left ear cup, the music will drop in volume, and ambient noise will be piped in using the built-in microphones. Once you remove your hand, your music volume and ANC return to normal. That’s a useful feature for quick interactions or listening to an announcement at an airport or on a train, but at $500, I would’ve liked to see some way of keeping transparency mode enabled for as long as desired — no arm-lifting required.

The M-200 ANCs lack sensors for detecting when they’ve been removed from your ears, so they won’t pause audio automatically like other premium noise-canceling headphones. Again, for $500, those extra convenience tricks should be part of the experience. Another would be multipoint Bluetooth pairing, which these headphones don’t give you either. Battery life is rated at 20 hours, which is on par with Bose and Apple but short of Sony.

You can pair the M-200 ANC headphones to your device without agreeing to any software terms. However, since many people will want to customize the neutral sound profile, V-Moda’s mobile app for Android and iOS will prove basically essential. By using that, you’re agreeing to:

The final tally is no mandatory agreements and one optional one.

V-Moda is new to noise cancellation, and it shows. The M-200 ANCs can’t rise to the level of the AirPods Max or even lower-priced options like Sony’s 1000XM4s or the Bose Noise Canceling Headphones 700. They’ll cut out a lot of lower-frequency noise, but the overall effect isn’t quite on the level of competitors. The V-Moda app lets you choose between 10 levels of noise cancellation, but even fully dialed up, I never quite felt like I was in that personal bubble of silence that the best ANC headphones provide. On the positive side, V-Moda’s noise cancellation didn’t result in any discomfort, nor did it noticeably alter the sound, which can happen with some headphones.

Along with the headphones and case, V-Moda includes a 3.5-millimeter cable, USB-C charging cable, and an airplane adapter. I really wish the company had bundled its BoomPro microphone — sold separately for $35 — right in the box with the M-200 ANCs. It feels like a missed opportunity, as the BoomPro is truly a great accessory for gaming and Zoom calls. Keep in mind that Apple didn’t even include a headphone cable with the AirPods Max, so I can’t knock V-Moda too hard, but this would’ve been a prime moment to give customers that bonus. It also would’ve helped boost the M-200 ANCs at voice call performance. As is, the built-in microphones are nothing special, and callers might find it difficult to hear you in loud or windy environments.

I genuinely wonder if V-Moda would have priced these things at $500 in a world without the AirPods Max. With Apple’s cans set aside, you’d be looking at an upper echelon of Bluetooth headphones with options like the Bowers & Wilkins PX7 and Sennheiser Momentum 3 that tops out around $400. (No, I haven’t forgotten about those $800 Beoplay H95s, but come on.) The M-200 ANCs are a solid pair of wireless headphones, and they maintain V-Moda’s fantastic build quality. But it’s impossible to overlook what’s missing when a company is asking for this much cash. The balanced sound signature will be a definite win for people who are explicitly looking for that. But these really needed to have a true transparency mode and better ANC to keep up with the pack and to warrant the significant investment.