Apple’s product design is usually very good, setting industry standards for how many of the gadgets and computers we use every day look and feel. But the company’s many hits make the less obvious design decisions stand out that much more.

Thanks to the huge amount of new stuff Apple introduced at its “Spring Loaded” event on Tuesday, we have a lot of new Apple designs to scrutinize. While the company generally did pretty well with this round of updates, there are still a few things that made us raise our eyebrows.

The iMac still has a big chin

I think Apple’s new iMacs look really good — except for that darn chin, which, once again, proudly protrudes from the bottom of the computer’s screen like Johnny Bravo’s impressive jawline.

To be fair, Apple did what it could to make the chin look nice. The pastel colors are really fun, and I’m happy Apple removed the giant logo that graced the chin of previous iMac generations. (Remove the “MacBook Air” text from my laptop’s bezel next, Apple.)

And I get that the chin is necessary to allow iMac to be as ridiculously thin as it is. Instead of putting the computer’s internals behind the screen, Apple has stuffed them into the chin.

Someday, though, I’d like to see Apple release an iMac with no chin at all — just a screen that’s a computer.

The iMac has white bezels

Perhaps the most surprising thing to me about the new iMac was its white bezels. Most of Apple’s recent computers have had black bezels, which typically do a better job of hiding the edges of the display and make it less obvious where the screen ends and the bezel begins. (The non-Retina MacBook Air, with its silver bezels, hung around until 2019.)

But again, I have to give Apple some credit for its choice here. Black bezels paired with the bright new iMac colors would be quite jarring — the white looks great with the new iMac colors. And these white bezels are significantly smaller than the giant black bezels on the Intel-based iMacs that are still on sale.

The new iMacs join Apple’s base iPad, the iPad mini, and the iPod touch in the white bezel club. It remains to be seen if the new iMac joining it is foreshadowing others.

The new Magic Keyboard has some nice upgrades, including a Touch ID sensor (which comes with more expensive models), new function keys, and color-matched aluminum. But the look of just four of the keys on the keyboard makes it much worse than the previous model, in my opinion.

Check out the keys on the four corners of the new Magic Keyboard. Notice how they each have one corner with a much wider curve than the rest?

I just think they don’t look very good. I get that they better match the wider curves of the keyboard itself, but I think they look odd when all of the other keys have four corners with exactly the same curvature.

Here’s an image slider comparing the old keyboard to the new. The uniform corners on the old model look a lot better, in my opinion. Look at that bad right arrow key on the new one! 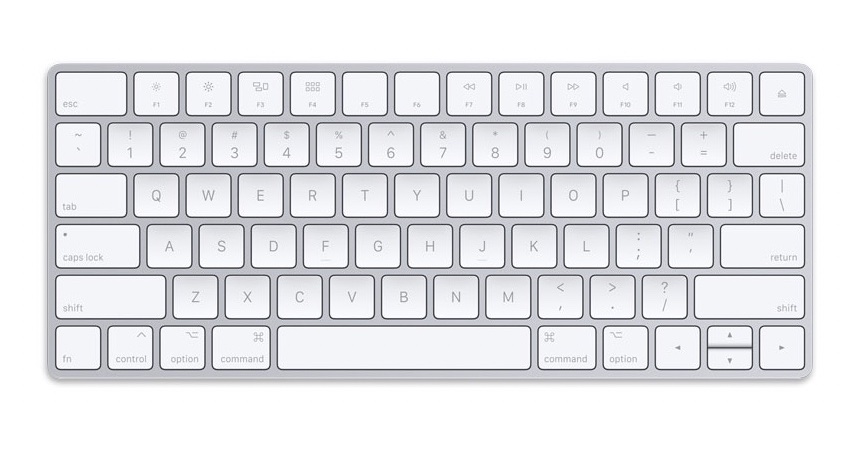 Apple’s old Magic Keyboard (left) vs. the new one (right).

And by the way, it looks like the Magic Trackpad that comes with the new iMac has the same wider corners as the new keyboard, too, based on a picture from Apple’s website. So if you want your keyboard and trackpad to have matched corners, you’re going to have to pay extra to get the new trackpad.

The new iMac does not have a touchscreen, despite looking an awful lot like another Apple device with a touchscreen

Apple, once again, has released a new iPad Pro with a front camera that’s placed on top of the device in portrait mode instead of on top in landscape mode. That means if you use any keyboard case that requires the tablet to be in landscape and you want to take a video call (which is something a lot of people are doing right now), the camera is awkwardly off to the side instead of right above the middle of your screen.

To try to get around this, Apple upgraded the iPad Pro’s new front camera to make it an ultrawide, and the company debuted a new technology that can automatically keep you in frame during video calls. But we won’t know for sure if that will keep you better-centered until we can test it for ourselves. And it won’t solve the problem of forcing you to look to the side if you want to look directly into the camera.

The new 12.9-inch iPad Pro is ever-so-slightly thicker, so it may not precisely fit the original Magic Keyboard case

Apple’s new 12.9-inch iPad Pro is “functionally compatible” with Apple’s original Magic Keyboard case, but because the tablet is 0.5mm thicker than the previous model, Apple advises that the case “may not precisely fit when closed, especially when screen protectors are applied.” So if you’re planning to buy the new 12.9-inch iPad Pro and want to use a Magic Keyboard along with it, you might want for hands-on reviews that test how well the new tablet fits in the older case.

Apple’s new AirTag item trackers sure seem like they should have an easy way to directly attach to something, but Apple decided not to include a small hole for, say, a keychain or a string. (Yes, I side with my colleague Chaim Gartenberg in his great AirTags keychain loop debate with Jon Porter.)

The Magic Mouse’s charging port is still on the bottom, five and a half years later

I already wrote about this one.

There is some hope: it looks like Apple fixed its TV remote

Apple’s new Siri remote, with its iPod-like scroll wheel, a five-way click pad, and smaller touchpad, looks like it will address complaints about the previous Apple TV remote’s annoyingly oversensitive touch controls. And the new aluminum design with black buttons should make it easier to see the buttons on the remote compared to the mostly black design of the previous model.

Correction: Apple now says the new iPad Pro is “functionally compatible” with the old Magic Keyboard case, so we have adjusted that section to reflect the new information.