Great for gamers, good for everyone else

Corsair’s K70 RGB TKL is an unashamedly gaming-focused keyboard. For one thing, it’s only available with the kinds of switches people normally recommend for playing games, while other features like low input latency and a dedicated “tournament switch” for esports clearly have gamers in mind.

At a price of $139.99 (£139.99), these features are coming at a premium, and they’re overkill for anyone not planning on competing at the next Dota 2 International. But the K70 RGB TKL is a complete package with lots of quality-of-life features for non-gamers. It attaches to your PC with a detachable USB-C cable (a first for Corsair) and features customizable per-key RGB backlighting, dedicated media keys, and a roller wheel for volume control.

At this price, the result is a great gaming-focused keyboard but only a good general purpose keyboard. 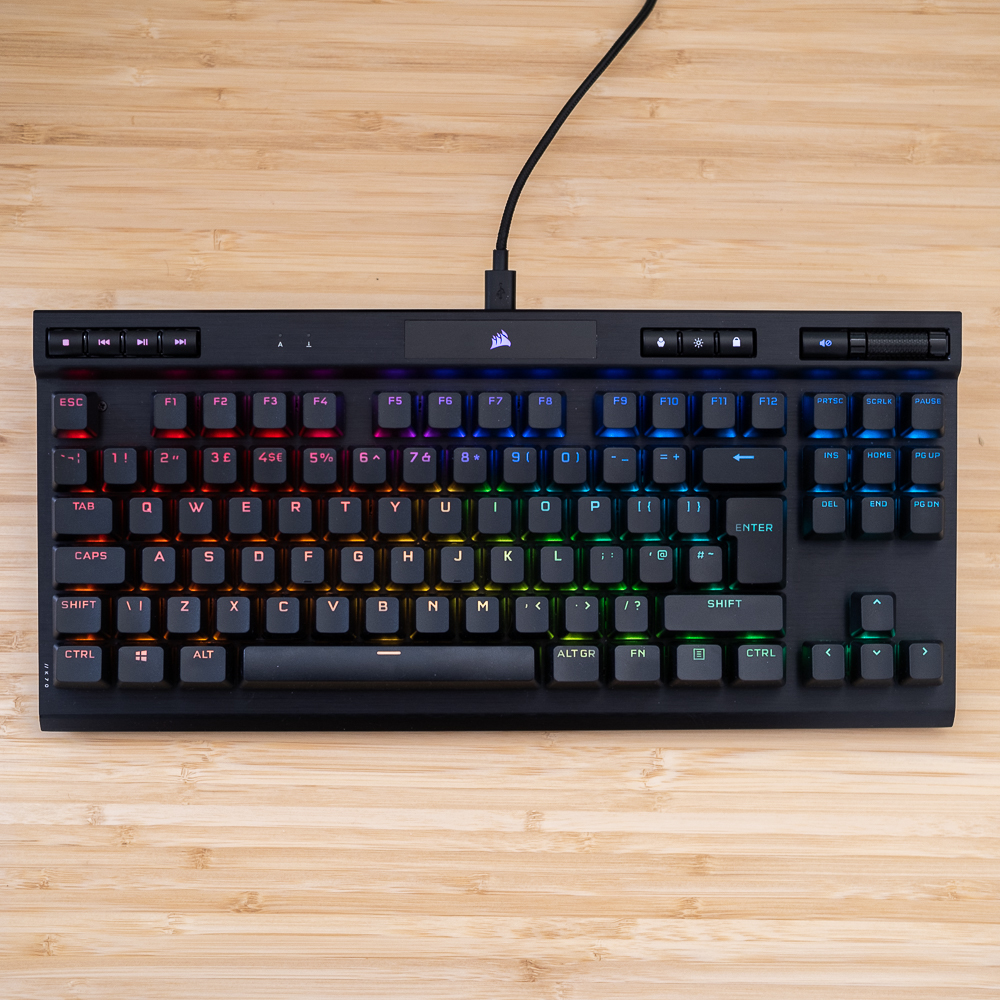 In case the specs didn’t tip you off beforehand, just looking at the Corsair K70 RGB TKL should tell you everything you need to know about its target audience. The bold, squared-off font on its keycaps is peak gamer, and the case itself has a minimalist, angular design. The only branding you get is a small Corsair logo on the keyboard’s forehead, which illuminates along with the rest of the keyboard’s lighting.

Its design might not be for everyone, but construction quality is good here. The K70’s keycaps are made of hard-wearing PBT plastic, and their legends are double-shot, meaning they let each switch’s lighting shine through and will never rub off. Corsair uses a standard keyboard layout, so you shouldn’t have any problems finding replacement keycaps in the right sizes.

As its name implies, the K70 RGB TKL is a tenkeyless board (hence the “TKL” in its name), meaning you don’t get a numpad to the right of the arrow keys. This makes perfect sense on a gaming keyboard, where you’ll typically spend most of your time with your left hand on the WASD keys and your right hand on a mouse. Unless you really need it for data entry, a numpad just gets in the way. Available layouts include US ANSI, UK ISO (which I’m using), and other European layouts, but there are no Mac-specific keys available.

Although it’s not particularly wide, Corsair’s keyboard has a bit of a forehead to house its media keys and volume roller. I generally prefer this simple approach, rather than having to access media controls through a combination of keypresses, even if it adds a little more bulk to the board. Build quality is otherwise solid; the keyboard wouldn’t flex, no matter how much I tried to bend it.

The keyboard’s configuration options are aimed squarely at gamers. There’s no option for tactile Cherry MX Browns or clicky Cherry MX Blue switches here. Instead, your options are classic gamer Cherry MX Reds, competitive gamer Cherry MX Speed Silvers, or, if you’re in Korea, considerate gamer Cherry MX Silent Reds. My review board came equipped with standard Red switches. The switches aren’t hot-swappable, so you’re going to have to use desoldering tools and then a soldering iron if you want to try out any other switch types.

The nice thing about buying from an established company like Corsair is that its companion software for configuring the keyboard’s layout and lighting effects is slick and polished. iCue is available for Mac and Windows and offers a truly dizzying amount of control over the K70 RGB TKL. You can remap the keyboard’s keys however you like and get access to a plethora of additional lighting effects. The controls are granular and get complicated fast, so I ended up ignoring them and just controlled the keyboard’s lighting from the board itself.

As well as handling lighting controls, iCue can also handle key remapping if you want to swap the layout of your keyboard around. It’s not as necessary a feature on a TKL board as on a smaller board with a more limited selection of keys, but it’s a useful inclusion if you want to tinker.

All of these are useful features regardless of what you want to use the Corsair K70 RGB TKL for. But its more unique features are gaming-focused. First up is a “tournament switch” on the top of the board, which disables any custom macros you’ve set up and switches the backlighting to a single less-distracting color. (You can customize which color using iCue.) It’s the kind of feature I could see being helpful if you’re simultaneously big into online gaming and also use a ton of macros. That’s a pretty slim Venn diagram of users, but thankfully, the switch is completely out of the way otherwise.

The other gaming feature here is an advertised polling rate of 8,000Hz, which is eight times higher than the 1,000Hz rate used by most keyboards. In theory, this means the keyboard’s input lag or the time between you pressing a key and the signal being transmitted to your PC, is as minimal as possible, presumably making all the difference in a high-speed gaming situation. Corsair tells me this brings down median latency to under a quarter of a millisecond, compared to 2 milliseconds and up with a 1,000Hz keyboard. You enable the 8,000Hz polling rate from within Corsair’s software. It’ll warn you that the higher polling rate uses more system resources, but I didn’t notice any impact on performance on my Ryzen 5 3600-equipped gaming PC, and Corsair tells me this should be the same for anyone using a gaming machine built in the last three years.

We’ve seen a similar trend with gaming mice, and Linus Tech Tips did a great analysis of what that actually means for performance. But the real-world difference it makes is minor, and I struggled to feel any difference in responsiveness when switching between playing Overwatch on the Corsair K70 RGB TKL and a regular 1,000Hz Filco office keyboard when playing on a 100Hz monitor. I have no reason to doubt Corsair’s low latency claims, but I think it’s the kind of improvement that only a small number of players will actually be able to notice.

Here’s what typing sounds like on the Corsair K70 RGB TKL with Cherry MX Red switches:

I’ll give credit to Corsair for the K70’s spacebar stabilizer (the mechanism installed under the larger keycap to stop it from wobbling). While this can sometimes sound rattly on other keyboards, there’s no such problem here. But if you listen to the typing sample above, you’ll hear that other stabilized keys like Backspace and Enter have more rattle. Ultimately, the overall typing experience on the K70 RGB TKL is only good, never great.

At this point, Corsair knows what it’s doing when it comes to mechanical keyboards for gaming. The K70 RGB TKL comes equipped with all of the quality-of-life features that are expected out of a mainstream keyboard at this point: nice durable keycaps, media keys and volume dial, and a detachable USB-C cable. Some of its more gaming-focused features are borderline overkill, but they don’t get in the way.

At its core, though, the K70 RGB TKL is a keyboard designed for gamers, and there are better keyboards out there if you’re only an occasional gamer. You can get a better range of switches elsewhere, as well as a more satisfying typing experience overall. That makes the Corsair K70 RGB TKL a great option for a gaming keyboard, but only a good keyboard overall.