What happens in beta had better stay in beta

Share All sharing options for: Twitter’s new beta TweetDeck is so bad I’m ready to ragequit

I counted: 31 tweets. That’s how many I could see in my traditional TweetDeck window the other day. But at that same moment, TweetDeck’s new preview only showed me 21 tweets — 38 percent less, and that’s with the narrowest columns and the smallest font available, just to be clear.

For over a decade, people have sworn by TweetDeck as the power user alternative to the original Twitter app, but what most people really mean is one specific thing: it lets you see more tweets. TweetDeck lets you see more tweets without needing to scroll. It gives you an entire dashboard of tweets you can throw up on a monitor, unattended. The power of TweetDeck is that it’s glanceable, a way to passively tap into a firehose of personal interests. That’s why it’s such a powerful tool for the world’s newsrooms, and a tool The Verge uses daily.

It’s also why I can’t comprehend how Twitter could have let this new version of TweetDeck into the world, even in beta form. I’m now worried Twitter has forgotten why we use TweetDeck. 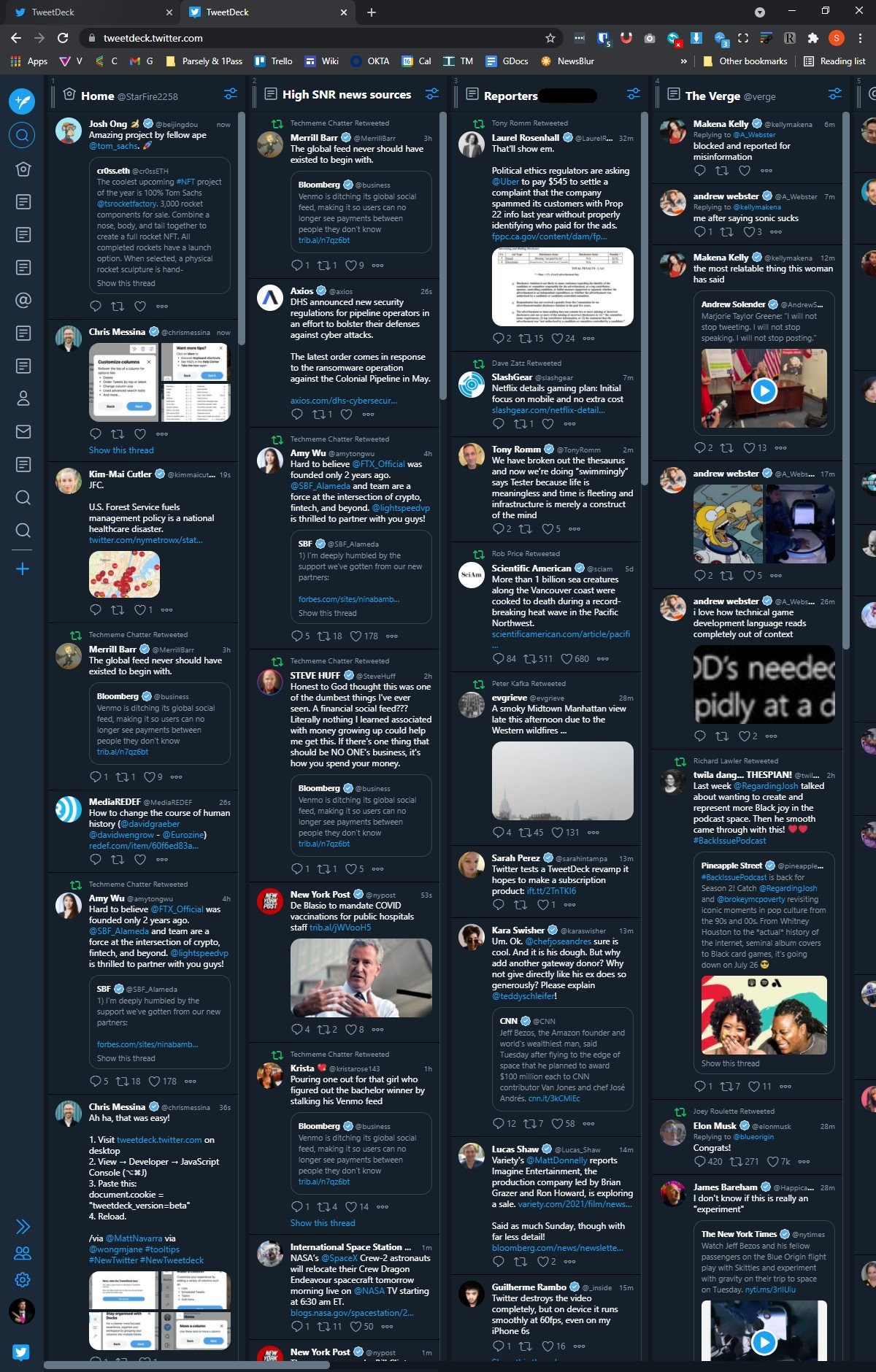 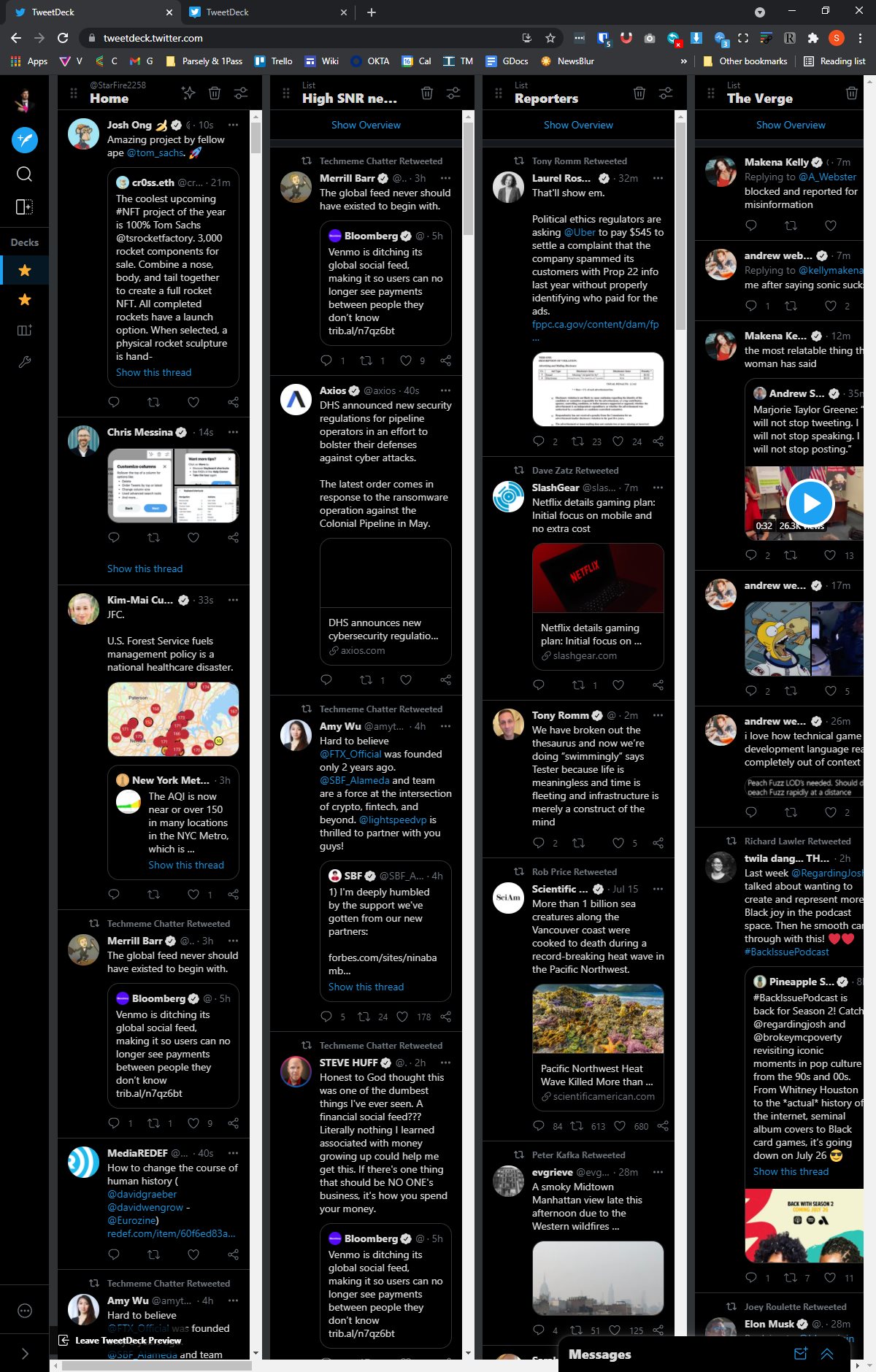 If you break it down, there are easily half a dozen little culprits, each maybe forgivable on its own:

Together, these changes add up to a less glanceable TweetDeck, whether you’ve got it up on a dedicated portrait monitor (like me) or not. I’m frustrated my 16:10 monitor can no longer fit four full columns without changing my browser zoom, but it might honestly be worse in landscape: if you follow people who retweet a lot of things, you’ll be lucky to see four at a time in any given column before they slide out of view.

When Twitter teased the new TweetDeck on Tuesday, the kneejerk reaction was that our precious columns might have been done away with for good, due to a teaser image that — to put it mildly — didn’t cater to TweetDeck’s power users. Hours later, Twitter realized its mistake, tweeting out “Don’t worry! Your favorite TweetDeck features aren’t going away,” suggesting that columns are alive and well. Twitter’s Eric Zuckerman, who helps the company partner with news publishers, even defended the design by tweeting a picture of his own:

I've been using the new TweetDeck preview for 9 months. If you're a longtime user and thrown off by the image below, rest assured you can customize your columns to look and behave very much like the version you know and love. For example, here's mine: pic.twitter.com/i9bT1Mkfr8 https://t.co/16dHgdVXAQ

And yet some of Zuckerman’s columns only let you see two large tweets at once. Two.

The new TweetDeck has some silver linings. I’m happy Twitter’s bringing over its new composer and direct messages box from Twitter.com. It’s nice to have more fine-tuned control over images, for instance, and you might argue that the pop-up messages box saves you having to erect a dedicated column for them (though, for The Verge’s private news account, it’s just blocking part of our view). And while I could care less about being able to switch between “decks” filled with columns from a single Twitter account, a la virtual desktops, I’m sure some social media managers are excited.

The new Notifications column is neat too, letting you easily see alerts for particular users and when your tweets have been liked and retweeted, instead of just seeing when you’ve been mentioned. That, plus columns for your own profile, Twitter’s explore tab, events, topics, moments and advanced Boolean search could make TweetDeck a complete alternative to Twitter, instead of occasionally making you swap between the two.

But a few creature comforts aside, I’m not looking for TweetDeck to be more like Twitter.com. Vanilla Twitter already exists, and it’s only a click away. (Or at least, it was until TweetDeck Preview added its own TweetDeck.com URLs for individual tweets, yuck.) I picked TweetDeck because it was more efficient, just like I picked a number of third-party Twitter apps back when those were a thing, before Twitter rate-limited most of them to death and kept them from properly auto-refreshing tweets as they came in.

Ironically, I’m having a little bit of trouble there with the TweetDeck Preview, too: if I step away from the new TweetDeck window for a while I find that the auto-refresh feature doesn’t always keep popping new tweets into my view. Twitter says TweetDeck currently tries to keep your current scroll position so you don’t lose track when more tweets come in, but that it wants feedback. (My feedback: make “don’t auto-scroll” a toggle.)

Twitter tells me it’s already seeing plenty of early feedback that tweet density is important to people, and that feedback is the point of pushing this preview out into the world. The company wants to explore what it should actually include in the final version, and criticism like mine can help. Oh, and it’s especially important here because Twitter’s expecting people to pay for this new version of TweetDeck. “With this test, we hope to gather feedback to explore what an enhanced version of TweetDeck could look like within Twitter’s subscription offerings later on,” writes a spokesperson.

I sure hope so, because there aren’t an awful lot of things keeping me on Twitter these days except for TweetDeck’s efficiency, and this preview version is less efficient on practically every front. If Twitter blows up TweetDeck, I won’t just decline to pay — I’ll probably leave Twitter for good.