OnePlus Buds Pro review: these earbuds get a lot of things right

The company’s most refined earbuds yet

Share All sharing options for: OnePlus Buds Pro review: these earbuds get a lot of things right

The new $150 OnePlus Buds Pro are the company’s most elegant, polished set of true wireless earbuds so far. And there’s a lot of value packaged together for that price: they include active noise cancellation, wireless charging, IP55 dust and water resistance, and solid battery life. OnePlus also tosses in extras like a low-latency mode for gaming and Zen Mode Air, which plays soothing relaxation audio. They go on sale September 1st in either matte black or glossy white.

The OnePlus Buds look quite sleek and less blatantly AirPods-esque (particularly the black version) than the company’s prior earbuds. Hopefully that’ll be enough to avoid any snags at US customs. They’ve also proven dependable and consistent in my testing so far, which couldn’t be said of the $99 Nothing earbuds when I looked at those a few weeks ago. I bring up the Nothing buds because they’re the first project of OnePlus co-founder Carl Pei’s new company and, at least on paper, have similar capabilities, so there will inevitably be comparisons between the two.

Our review of OnePlus Buds Pro 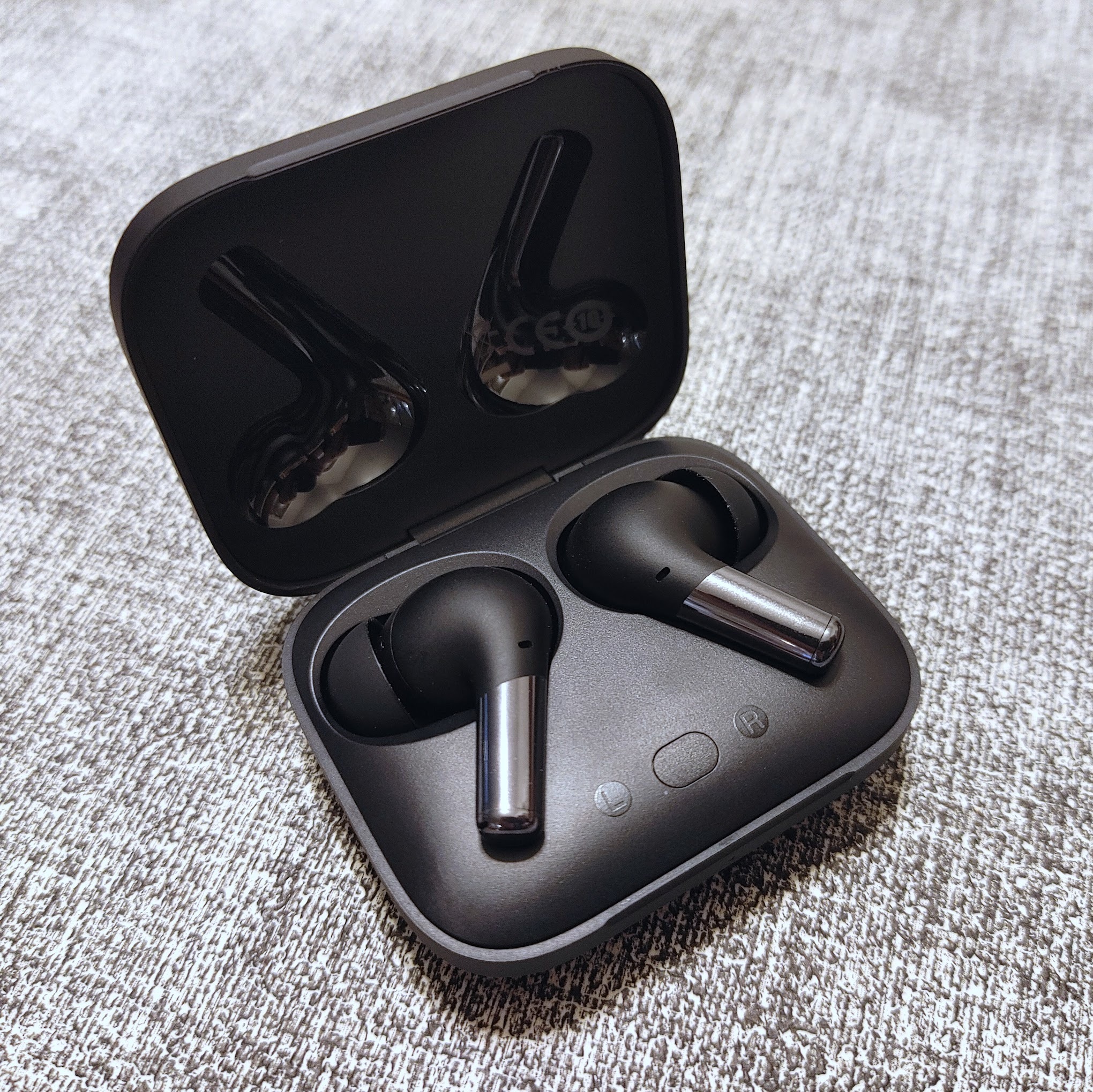 The earbuds have a shortened-stem design with a metallic finish on the stem portion. That’s a nice touch of style, and it’s also a marker of where you’ll pinch for controls. Like the AirPods Pro force sensor, the OnePlus Buds Pro have identical controls on either side: pinch quickly with two fingers to pause, twice to skip songs, three times to go back, or hold to switch between ANC and transparency modes. There’s even the same faint little audio click in your ears whenever a pinch is registered. Unlike the AirPods, there’s no indented area of the stem for the sensor, but I found OnePlus’ approach to work reliably without it. It’s very much a borrowed idea, but one that’s at least copied well.

I found the OnePlus Buds Pro to be airy and comfortable in my ears; they weigh 4.35 grams per earbud, lighter than both the AirPods Pro and more recent Galaxy Buds 2. But I never found a perfect fit with the three sets of silicone tips in the box: the large size was best, but I could still remove either earbud with the slightest pull. Their lightweight design helped mitigate this issue somewhat and kept them in my ears — they didn’t come loose when I shook my head or ate with them in — but OnePlus really could’ve used a more accommodating selection of ear tips.

Thankfully the less-than-perfect seal didn’t take away from their audio quality. The OnePlus Buds have 11mm drivers that the company says were “tuned for bass reproduction,” and that bears out when you listen to them. There’s a powerful, smooth foundation to tracks like “Don’t Go Dark” by Bleachers, and the OnePlus Buds Pro avoid becoming a bloated jumble of bass thanks a pleasing, non-harsh high end with ample detail.

The mids are a bit recessed, which is fairly common for earbuds at this price, and unfortunately OnePlus’ HeyMelody app (available for both Android and iOS) doesn’t include EQ adjustments. But I’ve been largely happy with how these sound, and they hold their own against the Amazon Echo Buds 2, Galaxy Buds 2, Jabra earbuds, and others in their price range. And I think they outrank the Nothing earbuds, but perhaps that should be expected for the $50 price difference. OnePlus includes an audio test to personalize your audio profile based on your own hearing. Like most other attempts at this, I wasn’t blown away by the difference and left this off.

ANC performance has also been satisfactory, though I think it’d be more impressive if the earbuds sealed in my ears better. As is, the OnePlus Buds Pro let you manually pick between “extreme” and “faint” modes for noise cancellation. OnePlus says these range between 40dB (extreme) and 15dB (faint) of noise cancellation. There’s also a “smart” mode that automatically adjusts the level of ANC based on the loudness of your environment.

That’s where I left it for portions of my review, and the earbuds did seem to dial back their noise-canceling powers when I was in my living room, where the only noise was the whirl of a nearby fan. On the street and at my local coffee shop, it seemed like the OnePlus Buds Pro defaulted to cranking the ANC, which is precisely what I wanted. The OnePlus Buds Pro are quite good at ridding your ears of low-frequency noises and distractions, and they did a respectable job on New York subways. I think Amazon slightly bests them, and pricier buds like the AirPods Pro and Bose QuietComfort Earbuds definitely still win out on the whole, but for $150, there’s not much to take issue with.

The same holds true of battery life. It’s rated at up to five hours of straight playback with ANC on, and that extends to 23 hours including the case’s extra juice. Leave noise cancellation off and those figures grow to seven hours and a claimed 31 hours, respectively. I wasn’t able to fully test out the last estimate there, but in general the OnePlus Buds seemed faithful to the others and I didn’t have any unexpected battery issues or uneven discharging. The case can be charged wirelessly, and it’s even rated IPX4 for water resistance, which is pretty rare to see. The earbuds have a more durable IP55 rating for dust and water resistance, so as long as your fit is right, they’re a fine pick for workouts.

Microphone performance was sufficient for voice calls, and those I spoke with could make me out clearly. But despite three mics in each earbud and wind noise reduction algorithms, I think it’s just a reality that as the stems of these earbuds get cut down in length, we’ll need to settle for “good enough” when speaking to people through them.

Then come the miscellaneous features. The earbuds have a low-latency “Pro Gaming mode” where their response is 94 milliseconds, but only when paired with a OnePlus phone running OxygenOS 11 or above. (This is another example of the earbuds lock-in that my colleague Jon Porter recently wrote about.) Even then, competitors like Razer are capable of hitting lower latency numbers like 60ms. Another OnePlus-exclusive feature is Dolby Atmos audio, which the earbuds don’t support on other devices.

The OnePlus Buds Pro can be set up and used over Bluetooth without any software agreements. But by using the HeyMelody app for Android or iOS, you’re agreeing to the OnePlus user agreement and privacy policy.

The final tally is two agreements that are mandatory for the full experience.

More useful to me personally was the Zen Mode Air feature, which aims to help you relax by playing soothing sounds through the earbuds. You can pick which audio track you like best in the HeyMelody app — with options like warm sunrise, meditation, summer seashore, nighttime camping, etc. — and then it’s downloaded directly to the earbuds’ memory. This has the benefit of keeping the relaxation sounds available when you’re switching between different paired devices. OnePlus isn’t alone in offering this type of functionality: Jabra includes something similar with its earbuds. It’s not the sort of thing I’ll use frequently, but I like knowing this little trick is there if I need a minute or two of calm during a hectic day. Unfortunately the OnePlus Buds take after many competitors in that they currently lack multipoint pairing, so they can only connect to one device at a time. However, OnePlus says it aims to add multipoint through a future firmware update.

Compared to its past wireless earbuds, the refinement and strong performance of the OnePlus Buds Pro demonstrate that OnePlus has grown confident and comfortable in this market. There’s no shortage of competition at this price, but OnePlus has brought together a compelling mix of features and an attractive design with relatively few weak spots. They’re another reminder of just how much you can get for $150.