The beloved Babylon 5 is getting rebooted, and series creator JMS is running the show

We thought it would never happen, but here we go

Share All sharing options for: The beloved Babylon 5 is getting rebooted, and series creator JMS is running the show

In 1994, J. Michael Straczynski (Sense8, Changeling) brought the world a science fiction show like nothing we’d ever seen. Babylon 5 told a single five-year story, filled with foreshadowing, deep political intrigue, and characters who grew and evolved, at a time when most TV shows still reset the agenda after every single episode. He wrote the vast majority of the award-winning show himself, and it appears he may be about to do it again — Warner Bros. Television is now in development on a “from-the-ground-up reboot” of Babylon 5 with Straczynski as writer and showrunner, designed to air on the CW.

Here’s the full description Warner Bros. provided to The Verge:

In a from-the-ground-up reboot of the original series, John Sheridan, an Earthforce officer with a mysterious background, is assigned to Babylon 5, a five-mile-long space station in neutral space, a port of call for travelers, smugglers, corporate explorers and alien diplomats at a time of uneasy peace and the constant threat of war. His arrival triggers a destiny beyond anything he could have imagined, as an exploratory Earth company accidentally triggers a conflict with a civilization a million years ahead of us, putting Sheridan and the rest of the B5 crew in the line of fire as the last, best hope for the survival of the human race.

That’s pretty much a dead-on description of the original show, minus some big surprises. So as a long-time fan myself, I have extremely mixed feelings!

In one sense, it’s pretty exciting because Straczynski told fans for years that Warner Bros. wanted nothing to do with the show ever again. “They literally told my agent ‘We have no plans, and no intentions, of letting anything else be done in terms of television with Babylon 5,’” he tweeted in 2018, and that seemed to be that.

Won't work. They literally told my agent "We have no plans, and no intentions, of letting anything else be done in terms of television with Babylon 5." And a kickstarter wouldn't pay for even a fraction of a season. That won't change for years, when those execs are dead/gone. https://t.co/NZ80WiIIcR

So if Warner Bros. and Straczynski have now abandoned their feud and might expand on the intriguing universe JMS built nearly three decades ago, that’s pretty exciting. But if it’s just a straight reboot rather than a sequel or spin-off, one aimed at the CW at that, it makes me wonder why bother — particularly when the excellent original series has a newly remastered version you can stream on HBO Max and purchase via Amazon and iTunes since January of this year.

A few hours after we published this post, Straczynski tweeted his answer:

To answer all the questions, yes, it’s true, Babylon 5 is in active development as a series for the CW. We have some serious fans over at the network, and they’re eager to see this show happen. I’m hip deep into writing the pilot now, and will be running the series upon pickup. The network understands the uniqueness of Babylon 5 and is giving me a great deal of latitude with the storytelling.

As noted in the announcement, this is a reboot from the ground up rather than a continuation, for several reasons. Heraclitus wrote “You cannot step in the same river twice, for the river has changed, and you have changed.” In the years since B5, I’ve done a ton of other TV shows and movies, adding an equal number of tools to my toolbox, all of which I can bring to bear on one singular question: if I were creating Babylon 5 today, for the first time, knowing what I now know as a writer, what would it look like? How would it use all the storytelling tools and technological resources available in 2021 that were not on hand then?

How can it be used to reflect the world in which we live, and the questions we are asking and confronting every day? Fans regularly point out how prescient the show was and is of our current world; it would be fun to take a shot at looking further down the road. So we will not be retelling the same story in the same way because of what Heraclitus said about the river. There would be no fun and no surprises. Better to go the way of Westworld or Battlestar Galactica where you take the original elements that are evergreens and put them in a blender with a ton of new, challenging ideas, to create something fresh yet familiar. To those asking why not just do a continuation, for a network series like this, it can’t be done because over half our cast are still stubbornly on the other side of the Rim.

How do you telling continuing story of our original Londo without the original Vir? Or G’Kar? How do you tell Sheridan’s story without Delenn? Or the story of B5 without Franklin? Garibaldi? Zack?

The original Babylon 5 was ridiculously innovative: the first to use CGI to create ships and characters, and among the very first to shoot widescreen with a vigorous 5.1 mix. Most of all, for the first time, Babylon 5 introduced viewers accustomed to episodic television to the concept of a five-year arc with a pre-planned beginning, middle and end…creating a brand new paradigm for television storytelling that has subsequently become the norm. That tradition for innovation will continue in this new iteration, and I hope to create additional new forms of storytelling that will further push the television medium to the edge of what’s possible.

Let me conclude by just saying how supportive and enthusiastic everyone at the CW has been and is being with this project. They understand the unique position Babylon 5 occupies both in television and with its legions of fans, and are doing everything they can to ensure the maximum in creative freedom, a new story that will bring in new viewers while honoring all that has come before. 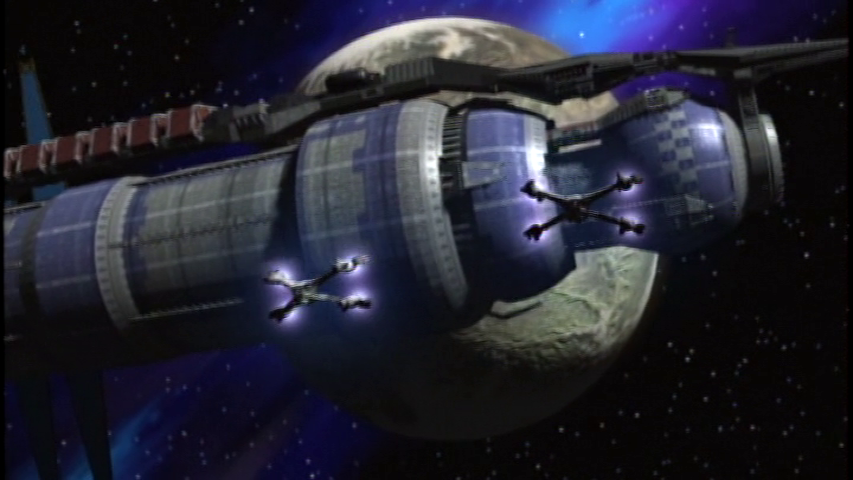 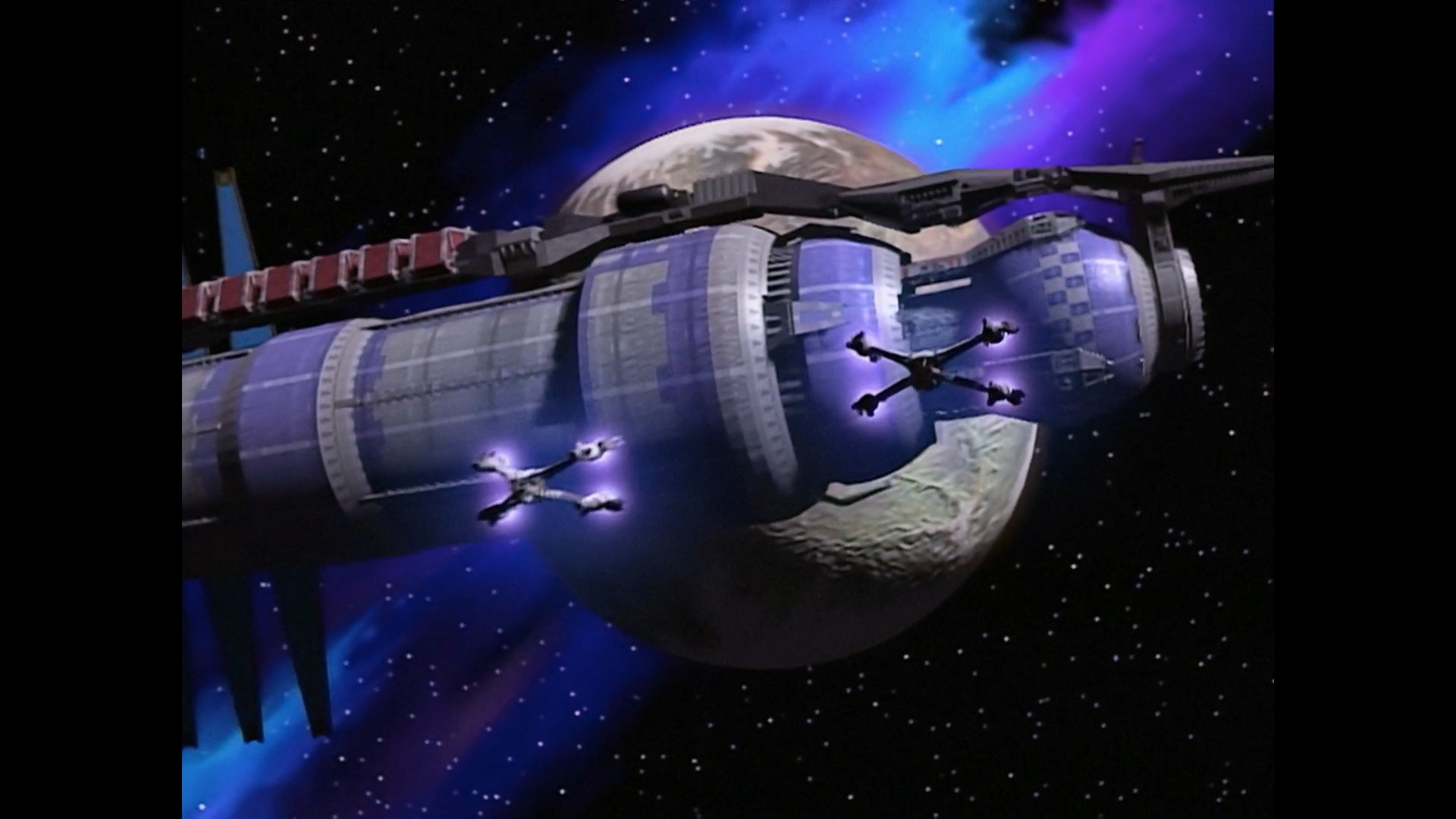 I should add that the remastered version still has its issues. Engadget has a great story about why the original Babylon 5 will never look its best, partly due to aging CGI that might have looked groundbreaking at the time. Some of the early episodes feature hamfisted plots, scenery-chewing actors and a general lack of subtlety, and I can see how they might turn off a modern audience used to shows like The Expanse. (Straczynski certainly still seems to feel the first season is worth it, and I think you’d lose a lot by skipping it.) 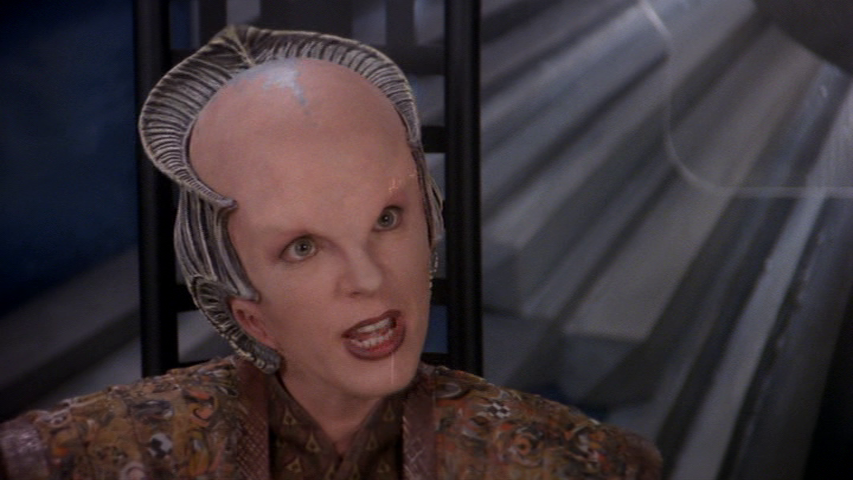 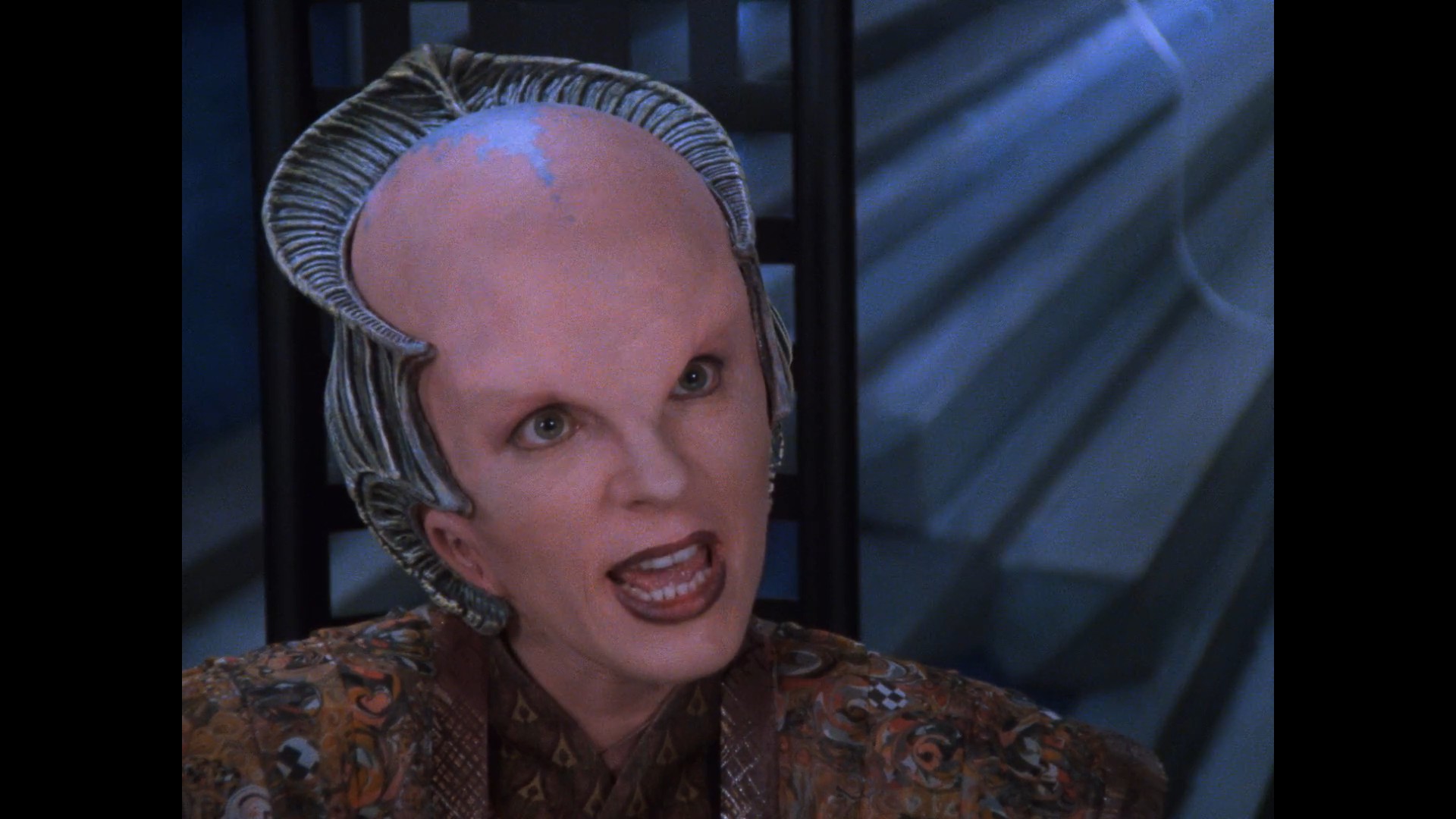 The DVD versions were filled with ugly transfer artifacts that got cleaned up in the remaster, like the “cracks” at Delenn’s brow and chin.

And while the remaster’s 4:3 transfer does an excellent job of cleaning up old artifacts and counteracting the bonkers decision to zoom in on the low-quality CG (see examples above and below), the noisy footage still doesn’t necessarily look great on a 4K TV. 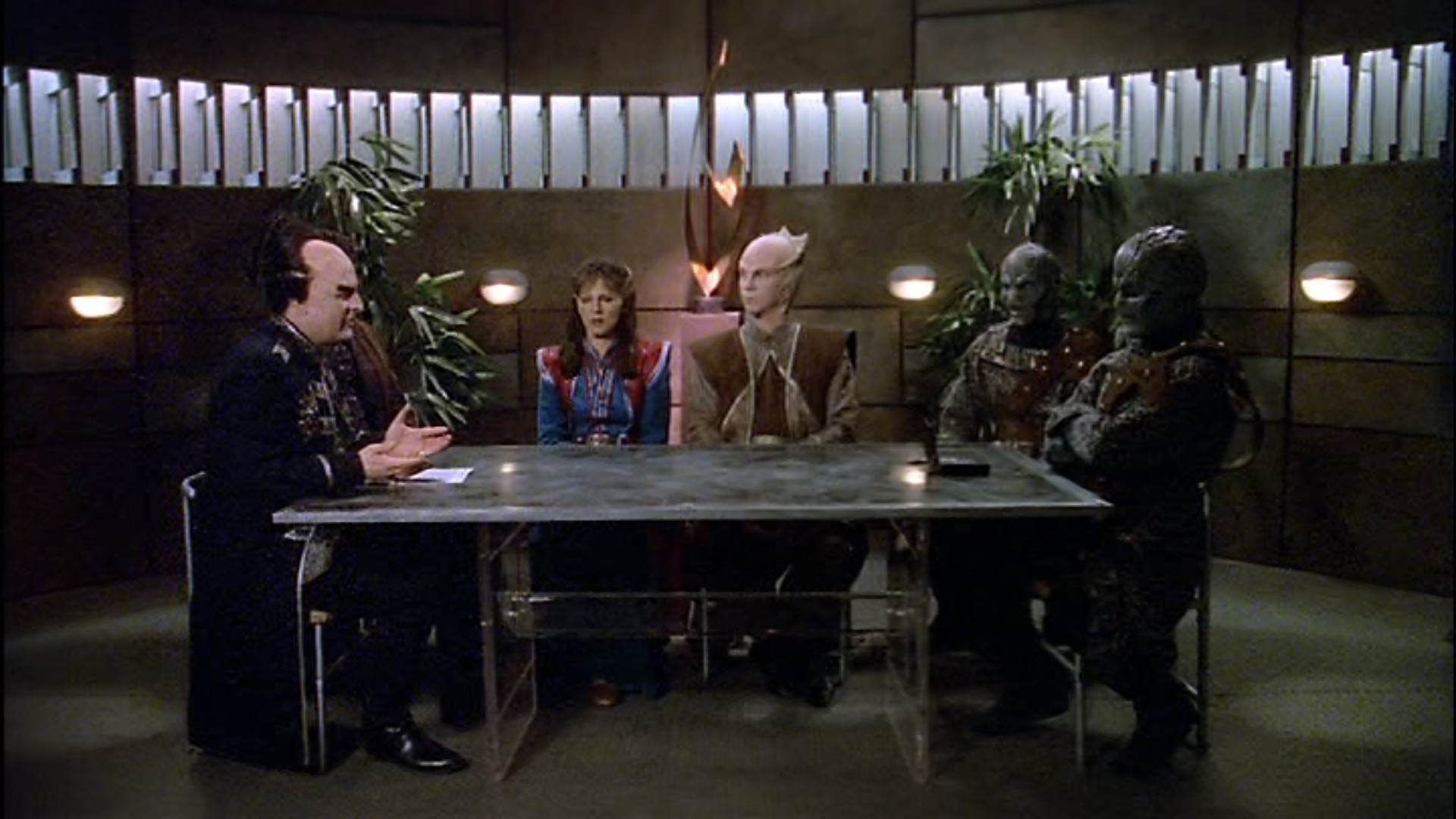 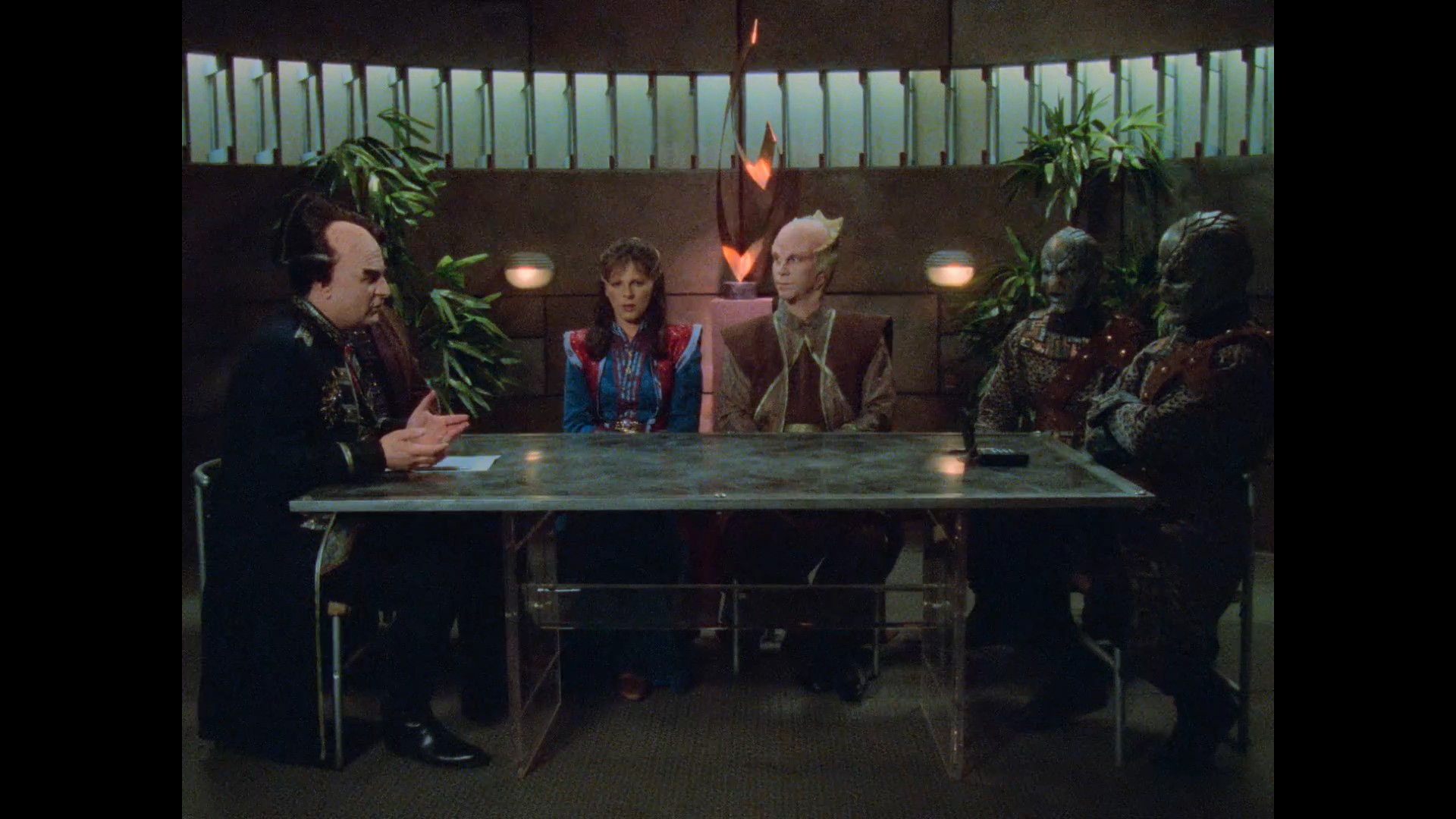 The remaster makes this scene noisy and a little green.

Still, there’s never been a better time to watch Babylon 5 in the modern era than this remaster, which is so much better than the DVDs. You just might want this guide to the agreed-upon proper viewing orders since HBO Max and co. seem to have ordered the episodes in a new way entirely. 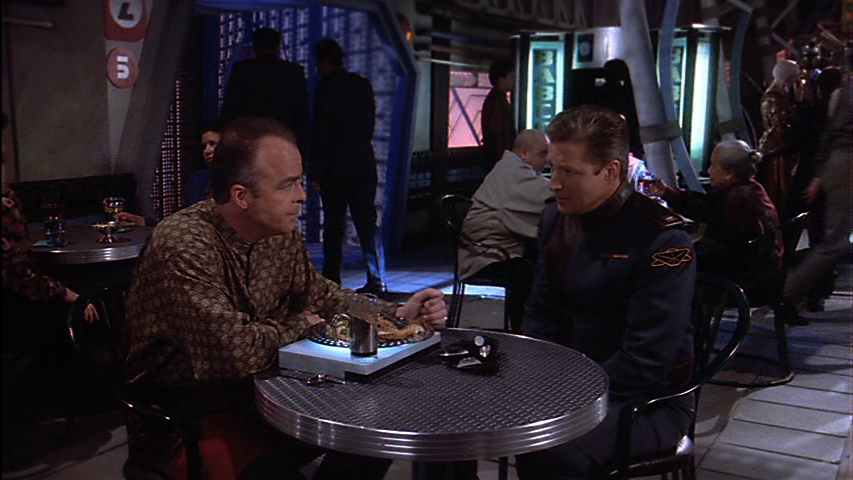 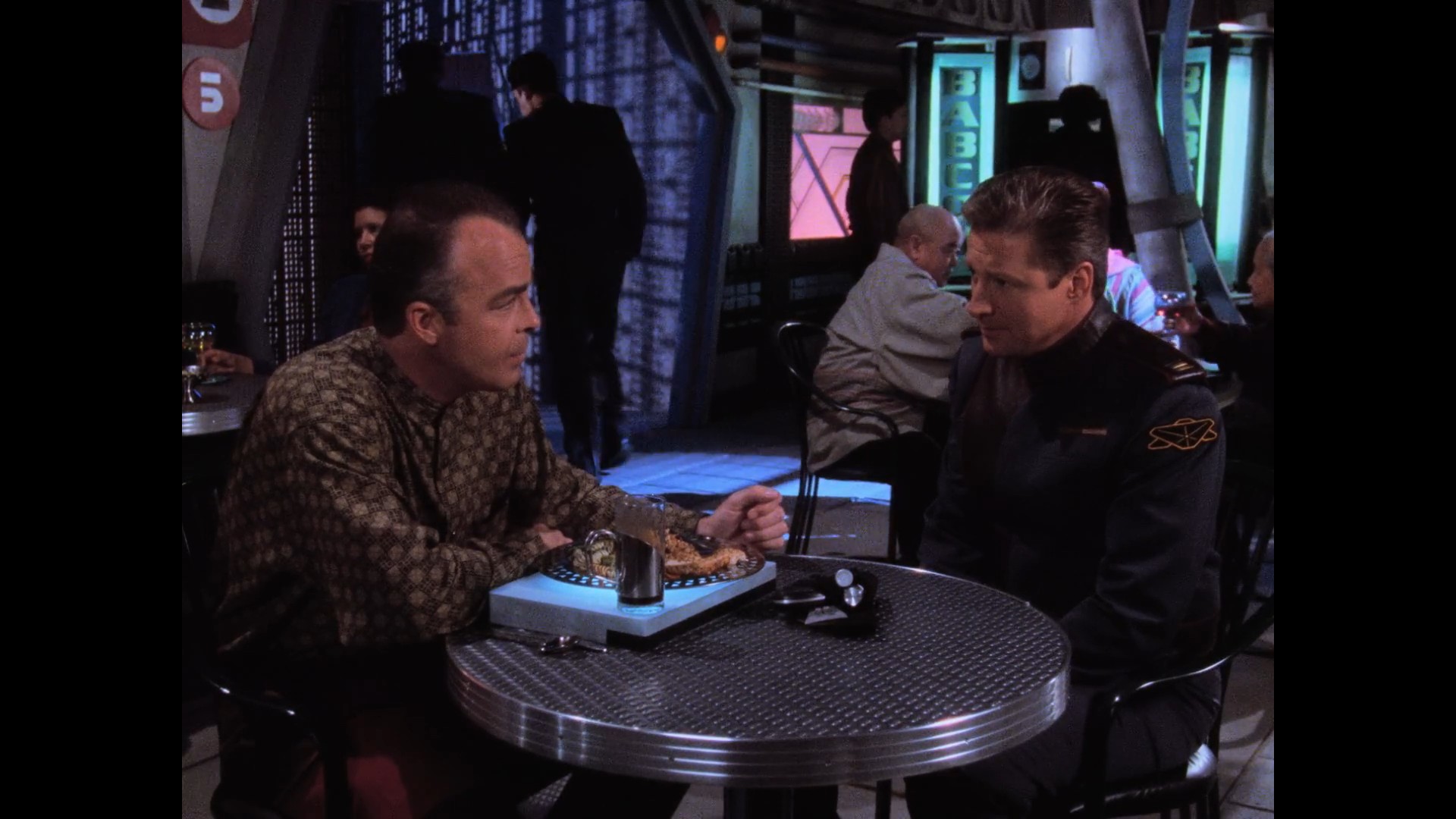 The remaster’s original 4:3 aspect ratio does mean you lose a little bit of background detail visible on the DVDs.

Update, 8:13PM ET: Added JMS’s full statement about why Babylon 5 is returning as a reboot instead of a continuation.