Plus, the Flex 5i and 3i might have what it takes to challenge Acer’s Chromebook Spin 713

Lenovo has announced a new Chrome OS tablet at Mobile World Congress 2022 that seems like a stellar value, along with a wave of other promising Chromebooks in its IdeaPad productivity lineup. The IdeaPad Duet 3 tablet seems to deliver more of what we liked about the 13-inch Duet 5 tablet, but smaller. It’s an 11-inch tablet, which should make it easier to lug around, and to hold in your hands. Lenovo says it’s the successor to the well-liked 10.1-inch Duet from 2020.

Compared to the larger Duet 5, the Duet 3 bumps the screen’s resolution from 1080p to 2K, while providing a slightly taller aspect ratio at 5:3 compared to 16:9 in the Duet 5. This should make the Duet 3 feel a little more natural to hold and view in portrait mode. The most notable difference between the two, apart from size, is that the Duet 3 has an LCD instead of an OLED — one of the Duet 5’s most alluring features.

Internally, much about the Duet 3 is similar to the Duet 5. It runs on Qualcomm’s Snapdragon 7c Gen 2 processor, and it can be configured with up to 8GB of RAM and 256GB of internal space. It has two USB-C ports with video, data, and charging capabilities, though you still won’t find a headphone jack here. Lenovo claims that the Duet 3 can last for 12 hours per charge.

In the box, you’ll get a detachable keyboard that Lenovo says has water-resistant, anti-pry keys. Sadly, the company still isn’t including a stylus in the box, though its touchscreen display supports them. 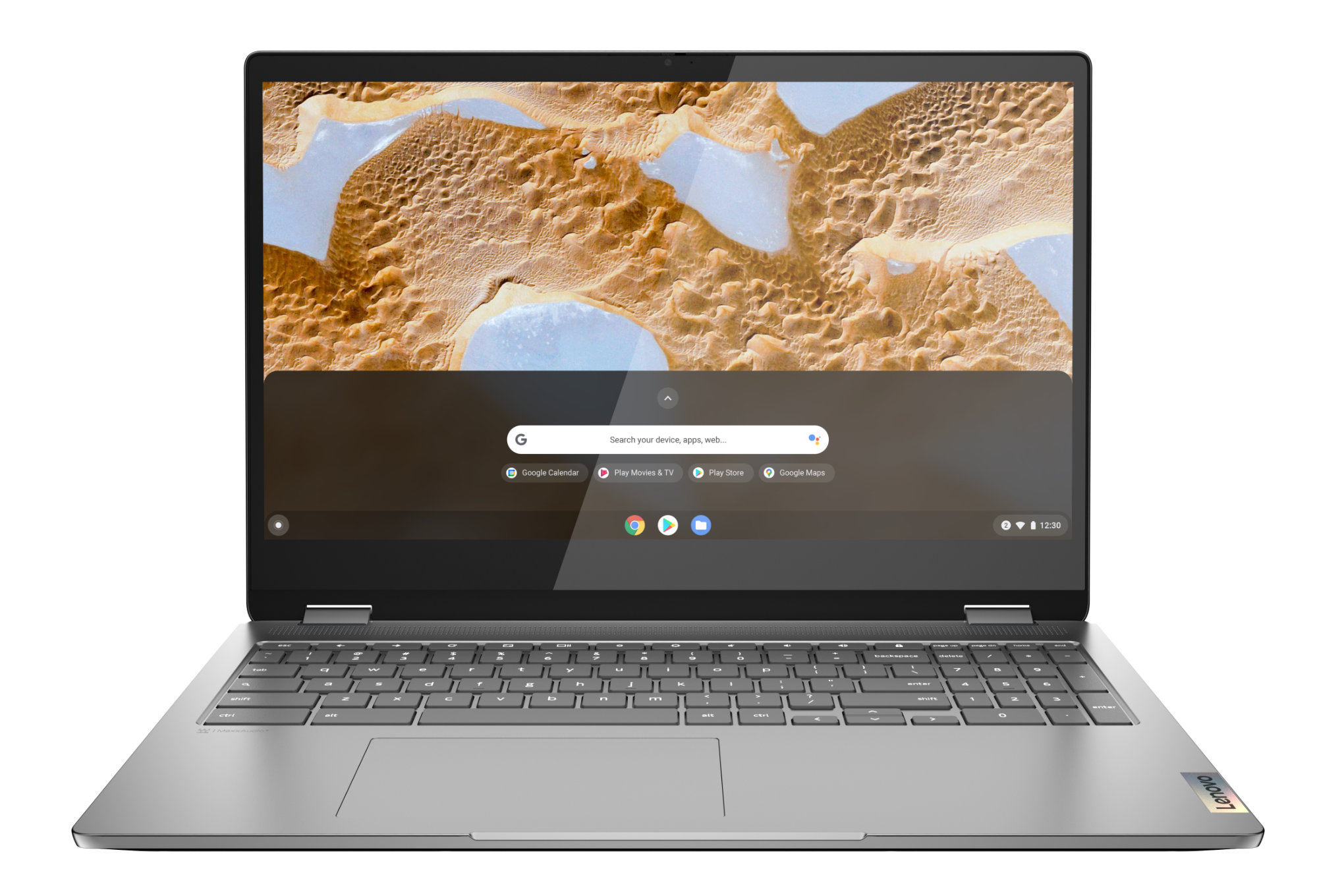 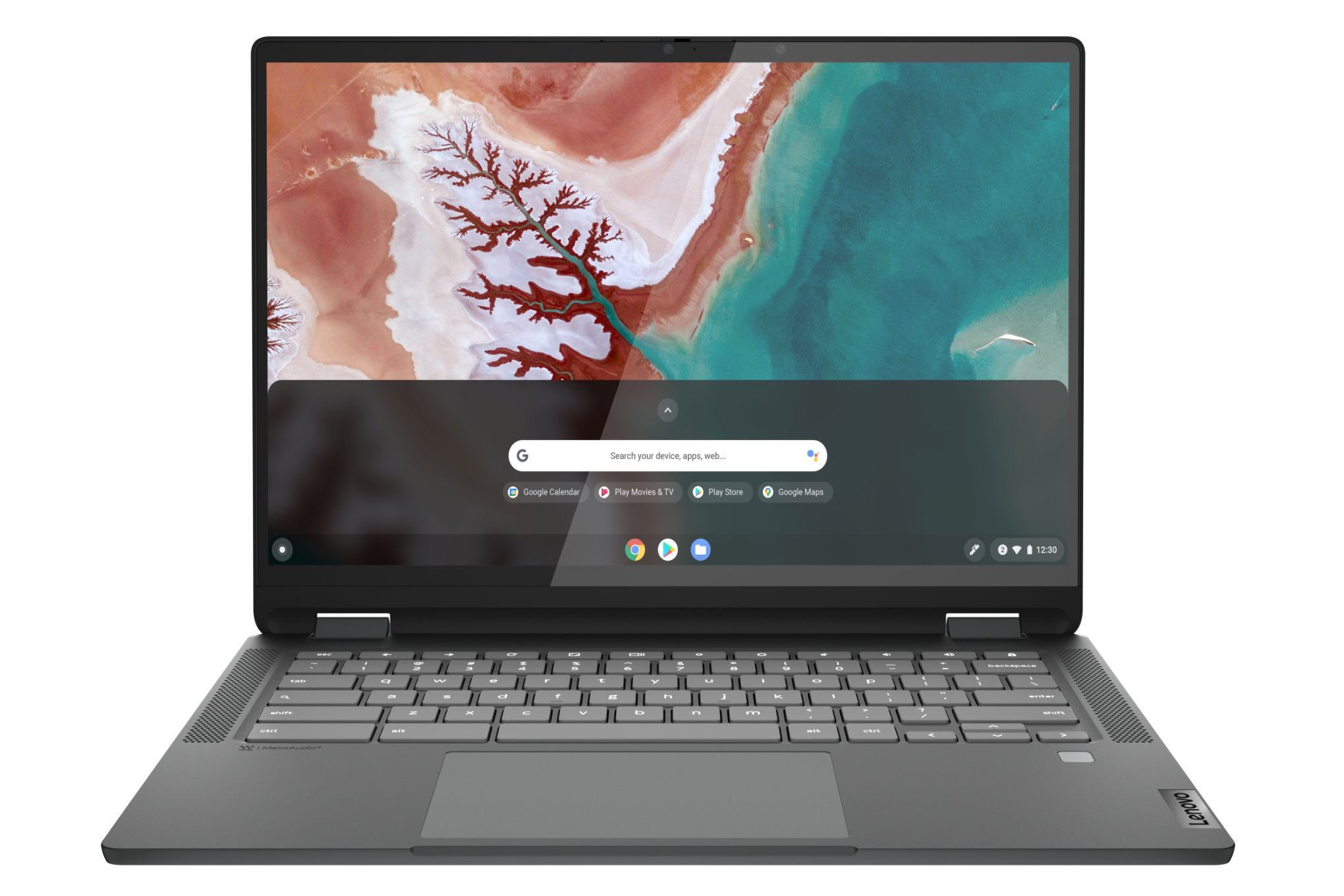 This slider shows the differences in display height, bezel, and chassis size between the Flex 3i (left) and Flex 5i (right).

Chromebook power users who want 2-in-1 flexibility should keep tabs on the 14-inch Flex 5i and 15.6-inch 3i. Their designs have a lot in common with Acer’s Chromebook Spin 713, the reigning champ in the world of Chromebooks, and the Flex 5i seems like a suitable competitor, with a 16:10 aspect ratio IPS display, a generously sized trackpad, and what sounds like promising performance: the 5i can go up to Intel’s Core i5-1235U processor (the base configuration stocks the Pentium 8505). The Flex 3i has a 16:9 aspect ratio screen, and starts with a Celeron N4500 processor, but it can be bumped up to the Pentium N6000.

The 5i offers fingerprint biometrics, along with a 1080p webcam (720p in the Flex 3i). Given the Flex 3i’s larger screen size, its chassis has room for more keys, including a full number pad. Each model comes in a blue or silver colorway, though the specific hues vary depending on the model.

While neither is flush with ports, the Flex 5i and 3i include one USB-C 3.2 Gen 2 port, a USB-A 3.2 Gen 1 port, and a microSD card slot on the left side (it’s baffling that Lenovo didn’t include at least one Thunderbolt 4 port for the higher-spec configurations). The 5i features one more USB-C (3.2 Gen 1) port on its right side, next to its power button and volume rocker, whereas the 3i includes another USB-A port and an HDMI port.

MWC 2022: all the phones and announcements coming out of Barcelona