An OLED screen, a cutting-edge GPU, and a hefty price tag

The Gigabyte Aero 15 is a laptop aimed at designers and creative professionals. But when I first saw the thing, I didn’t believe that. It looks nothing like any laptop that comes to mind when I think of “creators” (the slim and sleek MacBook Pros, XPS 15s, Surface Books, and Zenbooks of the world). The Aero is a beast. It’s 15.6 inches wide and 4.4 pounds. It has a bright LED logo on its lid, large visible vents on the back and bottom, and a colorful RGB keyboard that will turn heads from across the office. This is a gaming laptop, I thought on my first day using it. Designers won’t want this.

But I’ve made myself stop thinking that because the reality is: that’s a stereotype. There’s no reason that big, flashy devices should be reserved for gamers; that’s just a design trend companies decided on. Sure, some creators who want that aesthetic might be content to buy a “gaming” rig like the Razer Blade 15 to suit their needs. I’m happy to see a device that’s not made for gamers’ basements take on this look, though. It’s a good, if brave, statement: if you want to rock RGB lighting in your office, go for it. 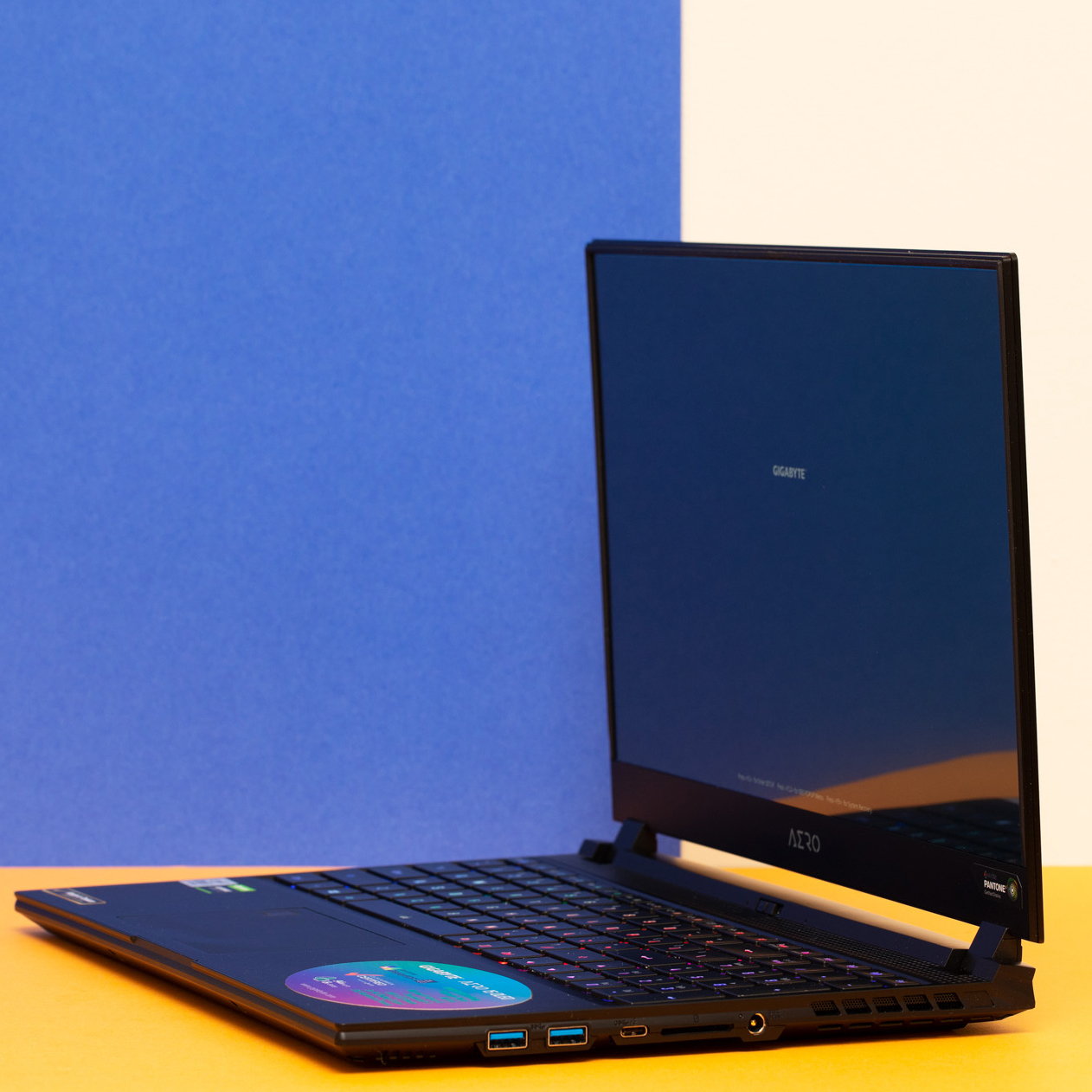 That hardware doesn’t come cheap, though — the Aero 15 OLED starts at $1,699 and the model I tested is $2,699. That’s not an unreasonable price for this machine — it’s only $100 more expensive than the MSRP of the Razer Blade 15 with the same GPU and processor. (The Blade, though, swaps out the OLED for a gaming-focused 1080p LCD panel.)

But if you’re not a content creator, it is worth considering whether you really need to combine an OLED screen with those specs. If you’re willing to compromise in one of those areas, you’ll likely be happy with any number of significantly less expensive laptops, such as MSI’s GS66 Stealth for gaming or HP’s Spectre x360 OLED for productivity work.

Another big advantage that the bulkier Aero can claim over slim competitors: ports. On the left, we’ve got a full-size HDMI, a Mini DisplayPort, a USB 3.2 Type-A, an audio jack, and an Ethernet jack on the left side. On the right, two more USB 3.2 Type-A ports, one USB-C with Thunderbolt 3, a power port, and a full SD card slot — another creator mainstay many gaming (and non-gaming) laptops lack. Professionals should be able to connect all kinds of monitors, projectors, drives, and other equipment without having to resort to dongles.

The Aero 15 has what Gigabyte refers to as a “next-gen cooling system.” It comes with two fans containing 71 eight-centimeter blades each, in addition to five heat pipes. The setup gets the job done, albeit loudly. Throughout my daily workload — including around a dozen Chrome tabs, Slack, Steam, and Spotify apps open with downloads running in the background — all parts of the Aero stayed completely cool. During gaming, only the bottom got slightly warm, the touchpad and wrist rests stayed cold, and the CPU never passed 88 degrees Celsius.

In exchange, I got to hear the fans whenever the laptop was doing anything remotely demanding (three Chrome tabs would set it off). They were audible from a few feet away. The constant whine was a bit annoying, but not unexpected for a powerhouse of this size.

The 2070 Super Max-Q is earning its stripes

If you can tolerate the noise, you’ll get a decent gaming experience out of the Aero. It had no trouble with Doom Eternal (where it achieved an average of 180fps in 1440p and 58fps in 4K), League of Legends (where it averaged 151fps with a minimum of 127fps), or Overwatch on Epic settings in 4K (where it kept a steady 70fps). It did an impressive job with Red Dead Redemption 2 on Ultra (anti-aliasing off), averaging 42fps with a low of 19fps in 1440p. The 2070 Super Max-Q is earning its stripes.

For creative-focused tasks, the Aero’s gaming pedigree helps a lot. It took just five minutes and 25 seconds to export a 5:33 4K video in Premiere Pro, which is significantly faster than any MacBook Pro we’ve tested in the past few years. (The midrange 2019 16-inch model took over 10 minutes to finish the same task). The Aero clearly had the cooling capacity for the job, with both the CPU and GPU staying around 50 degrees Celsius throughout. The one thing to note is that you will need to keep the Aero plugged in for the best performance, which isn’t a concern with the MacBook Pro.

In addition to the higher resolution, the display is more color-accurate than most gaming panels. I measured 100 percent sRGB coverage and 96 percent AdobeRGB coverage. I clocked maximum brightness at 425 nits, which is doable for creative work, but not as bright as the MacBook Pro. The Aero’s screen is also fairly glossy, and even at max brightness it was difficult to use outdoors.

The display is more color-accurate than most gaming panels

But the keyboard is the first thing anyone will notice about this device. I don’t own anything RGB, but I still found this one cool. The lighting is per-key, so you can set off all kinds of dynamic color effects in Gigabyte’s Control Center utility (they’re a lot of fun to play around with). Colors can move back and forth across the keyboard or cascade up and down, ripples can roll outward each time you press a key, rainbow colors can snake up and down each row. You can change color, speed, and direction, and you can create your own effects as well. These are all things that are commonplace on high-end gaming laptops at this point, but it’s rare to see them used in non-gaming devices. I’ll admit that I sometimes had trouble focusing on work when a miniature disco was occurring under my fingers. But if you have a better attention span, go for it.

The keys themselves are soft and a bit shallow, but certainly snappy. Typing was pleasant and I actually surpassed my typical speeds. Gigabyte has managed to squeeze a numpad on, which you don’t see on 15-inch laptops every day. It’s a tight squeeze; I sometimes hit NumLock when I meant to hit backspace. I imagine most people will get used to that with time, and the numpad is a nice addition for business users.

The plastic touchpad is smooth, gestures work as they should, and the click is easy and fairly quiet. There’s a fingerprint sensor in the top left corner, but the trackpad is big enough that I never bumped into it during use. Unfortunately, the material retains a lot of fingerprints. After just one day of use, there was a visible cloud of prints in the center; it almost looked gross.

The Aero’s speaker grill is above the keyboard, and it sounds clear. The audio had more than enough volume to overpower the loud fans, and I could game just fine without headphones. There’s not much bass, while midrange and treble tones are quite crisp — it’s on par with most decent laptop speakers, but not on the level of the MacBook Pro’s six-speaker array. It does, however, have an excellent surround quality. I really felt like I could hear my music on either side and above me — it was a miniature theater experience.

To use the Gigabyte Aero 15 (OLED), you have to agree to:

You can turn surround sound on and off in the Nahimic “3D Audio for Gamers” software that comes preinstalled. You can also adjust equalizer settings, as well as customize and toggle between sound profiles for music, movies, communication, and gaming. (The speakers on the first review unit we received stopped working due to an issue with a Windows update and Nahimic’s driver. Gigabyte says it’s working on this problem. The company sent me a second unit, on which I disabled Windows updates and didn’t encounter any problems).

Most of my complaints about the Aero 15 have been fairly nit-picky so far. On most fronts, it’s a good workstation with minor flaws. But there’s one thing that’s actually quite a bummer, and that’s the placement of the 720p webcam. It’s mounted right below the screen and angled upward. The result is that anyone you’re video chatting with gets a great view of your nostrils, chin, and ceiling, as well as your knuckles if you’re typing. It led to some awkward calling experiences, as when I was looking directly at my co-workers on my screen, my camera made it appear that I was talking to someone off in the distance. I ended up keeping video off for most meetings, so the setup wasn’t much better than not having a webcam at all.

I know that most laptops don’t have exceptional webcams, but a nosecam on a $2,600 device is unfortunate, especially for folks who work remotely and attend a lot of meetings on Zoom. (There is a privacy shutter, which is helpful for peace of mind).

The other considerable downside, and what reminds you that the Aero 15 is still a gaming laptop at its core, is battery life. On our battery test — which involves multitasking in around a dozen Chrome tabs, Slack, and intermittent Spotify at about 200 nits of brightness (around 65 percent on the Aero’s brightness slider) in battery saver mode — the Aero 15 lasted five hours and 22 minutes. That’s decent for a machine with these components; even powerful workstations without OLED screens are notorious for short battery life. Five and a half hours is comparable to other gaming rigs like the Blade 15. Still, it’s worth noting that you’ll need to charge this throughout the day (like most gaming laptops, the Aero ships with a hefty 230W brick), and if you’re often working on the go, you may be better suited to a slimmer machine like the MacBook Pro.

if you’re often working on the go, you may be better suited to the MacBook Pro

Apart from the unfortunate webcam, there’s not a lot to complain about with the Aero 15. The 10th Gen i7 and the RTX Super mobile GPU do a good job with the most demanding games on the market. The screen is a standout, delivering a stunning and color-accurate picture. The main consideration for creative professionals is whether 425 nits is bright enough for their office or home environment.

The big question is whether you need this kind of power

For everyone else, the big question is whether you need this kind of power. An OLED screen, a 45-watt H-series processor, and a cutting-edge GPU are certainly cool things to have. But they also cost a chunk of change, and you’re paying in hours of battery life as well. A wide range of lower-priced laptops offer similar gaming specs with a higher refresh rate screen (the $1,799 GS66 Stealth or the $1,999 Predator Triton 500) or similar color reproduction (OLED models of the Spectre x360 go for $1,799).

It’s possible the Aero 15 is exactly what you need. If so, don’t let me stop you. It’s a good computer. Just make sure you’ve looked into the cheaper alternatives that can probably give you most of what you want.

Overwatch 2 will replace the original Overwatch

Valve is doubling Steam Deck shipments, so you might get yours faster