Intel’s chips are holding it back

Microsoft’s Surface Go 2 is easy to fall in love with but hard to live with.

The small tablet has updates in it that go a long way toward addressing the problems with the original Surface Go, but not entirely. The screen is bigger, and there’s an option for a faster processor, both of which make this a better computer.

It starts at $399.99, but that price isn’t really what you’ll pay. It would be silly to get a Surface Go 2 without a keyboard, so add $100 for that. At five hundred bucks, though, it’s a category where you will find competing products that do many of the things the Surface Go 2 does but better. If you spring for the faster processor ($730 with a keyboard), that’s even more true.

The only thing those competing products can’t do is be a little tablet that happens to run Windows 10. So the question is simple: how much do you need that?

Our review of Microsoft Surface Go 2 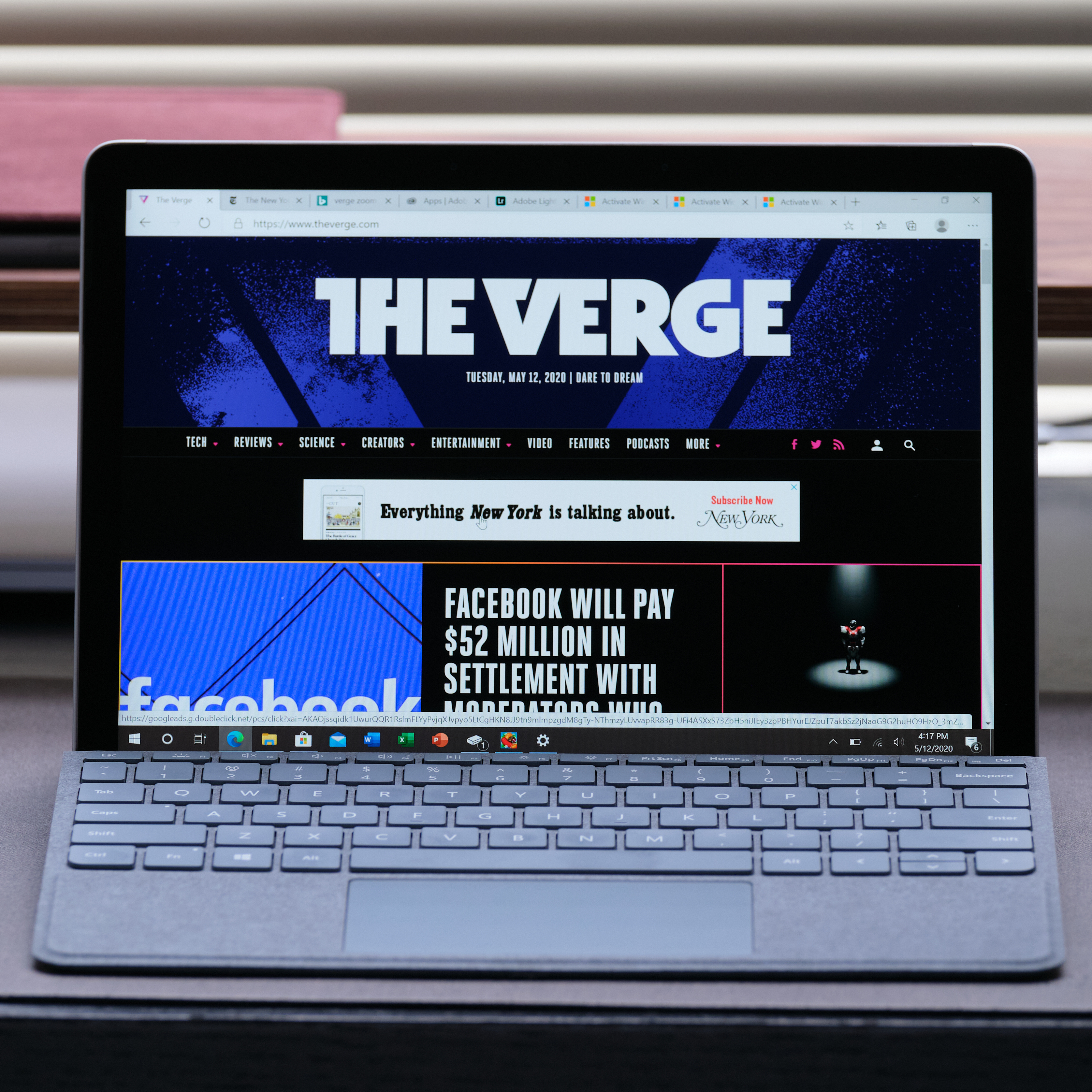 If you’re unfamiliar, the Surface Go 2 is a Windows tablet that’s about the same size as a regular iPad or the 11-inch iPad Pro. But because it’s a Surface, it has a few accoutrements that iPads lack. It has a kickstand that works at any angle, a microSD card slot for expandable storage, a Surface connector to go along with its USB-C port, and a headphone jack.

Maybe my favorite thing about Surface hardware these days is a camera that’s actually where it belongs on the top of the screen when in landscape orientation. It works with Windows Hello for logging in with your face and looks much better on videoconferences than laptops with puny sensors inside their thin laptop lids. It’s one of the benefits of putting all of the computer guts behind the screen.

Other than increasing the screen size, Microsoft hasn’t changed a single thing about the body on the Surface Go 2. It still has gently curving corners, feels solidly built, and works with all of the same accessories — including the keyboard.

Unfortunately, that keyboard still has a bit too much flex to it. When I’m using the Surface Go 2 on my lap (where, really, it feels like it belongs), if I rest my hands too heavily on the palm rests, it will click the mouse on me. And maybe because there’s less room for magnets in the bezel, the keyboard sometimes doesn’t stay up at an angle when you press down on it.

But the screen is the major change here: it’s now 10.5 inches diagonally (and still at a 3:2 aspect ratio). It has a 1920 x 1280 resolution, and although it doesn’t get super bright, I think it looks good. Even though it’s not that much bigger than the first iteration, it feels much less cramped. Plus, as a bonus, the bezels are no longer vaguely, embarrassingly large.

As is increasingly common these days with computers, there are two versions of the Surface Go 2: the base model and the upgraded spec model that I am reviewing.

As with other Windows 10 computers, the Surface Go 2 presents you with multiple things to agree to or decline upon setup.

Add it all up, and you have two mandatory agreements and 11 optional ones.

The base model comes with a pokey Pentium Gold processor, even pokier eMMC storage (64GB of it), and a mere 4GB of RAM. With the keyboard, it’s $500. Those specs are enough to get you on the web with a handful of tabs or run a couple of Office windows next to Outlook but certainly not much more.

The upgraded version comes with a dual-core Intel Core m3 processor, a faster SSD (128GB), and 8GB of RAM. 8GB is the minimum amount I’d recommend to anybody buying a Windows machine with intentions to use it as a laptop. With the keyboard, it’s $730. You can add LTE for $100 or switch to the nicer Alcantara keyboard for $30 more than the basic one.

All of these prices matter because they put the Surface Go 2 in context: even though that $399.99 introductory price seems really cheap, in actuality, the cost is much more likely to be comparable to a nice iPad with a keyboard accessory, a nice Chromebook, a refurbished (or discounted) Surface Pro, or a midrange Windows laptop. Nearly all of those computers are going to be more capable than the Go 2 in some key ways, even compared to the upgraded model.

“Slow” is not the right word to describe the Surface Go 2’s performance, at least not for the Core M3 model I’ve been using. When you’re doing a single task — staying within its limits — it feels snappy enough. A better way to put it is to say the Surface Go has a very low performance ceiling. If you try to run too many apps or even a single app that’s too intense, it will let you know by lagging to a halt.

For example, I quit every app and took a flyer on launching Photoshop and editing some RAW photos. It worked with some delays, but it was a drag at best, and I found myself waiting longer and longer for each successive edit to apply.

If you know the limits, you will have a good experience with the Go 2 — but only for five or, at most, six hours. That’s the best I could get out of the battery, even when I was babying it with fewer apps and a lower-than-usual screen brightness. Microsoft put an ever-so-slightly larger battery in this year, but it hasn’t made a big difference.

On any other laptop, five or six hours would be a disappointment but not a huge one. But the Surface Go 2 is meant to be an ultra-portable, take-anywhere kind of gadget. And in that category, this battery life doesn’t really cut it.

When Microsoft first announced the Surface Go back in 2018, it talked a lot about how transformative it could be to have a full Windows experience on such a small, portable device. As an avowed lover of tiny computers, I buy into that claim more than most. But even I have to ask myself if the trade-offs are worth it.

How badly do you want Windows in a small tablet, really?

That question gets especially acute when you consider all of those competing platforms I mentioned earlier. For five or six hundred bucks, you can get a very capable Chromebook that will run circles around the Go 2. Would Chrome OS work for you? An iPad will feel faster and last longer. Would iPadOS work for you?

If the answer is no, and you need Windows, ask yourself this: how important is the size to you? You can get a discounted or refurbished Surface Pro 6 or 7 for very nearly the cost of a well-specced Surface Go 2. That makes a lot more sense for a lot more people, I think.

There’s nothing else like the Surface Go 2. But while the idea of a little Windows 10 tablet is appealing, I’m not entirely sure it’s really practical. It’s a tiny niche for a small computer.