They’re super comfortable and have lengthy battery life, but the style won’t be for everyone

Share All sharing options for: Microsoft Surface Earbuds review: comfort at a cost

Microsoft is late. The company’s first truly wireless earbuds, the Surface Earbuds, were latecomers when they were first announced back in October, and they are even later now that they are finally available. In 2020 alone, Google has released its second-gen Pixel Buds, Samsung made strides with the Galaxy Buds Plus, and Sennheiser debuted another set of hi-fi truly wireless earbuds. And as always, you’ve got Apple, Sony, and Jabra in the mix. This wide field of competition has already led Microsoft to launch them at a lower price ($199.99) than initially planned. So how does Microsoft differentiate?

The company says its Surface Earbuds were built with an eye toward unrivaled comfort, a standout design, rich sound quality, and integration with the Office 365 suite. They deliver on several of those fronts. But the Surface Earbuds also make trade-offs that will remind you these are Microsoft’s first pair of truly wireless earbuds. The problem is, everyone else is already on round two or three.

Our review of Microsoft Surface Earbuds 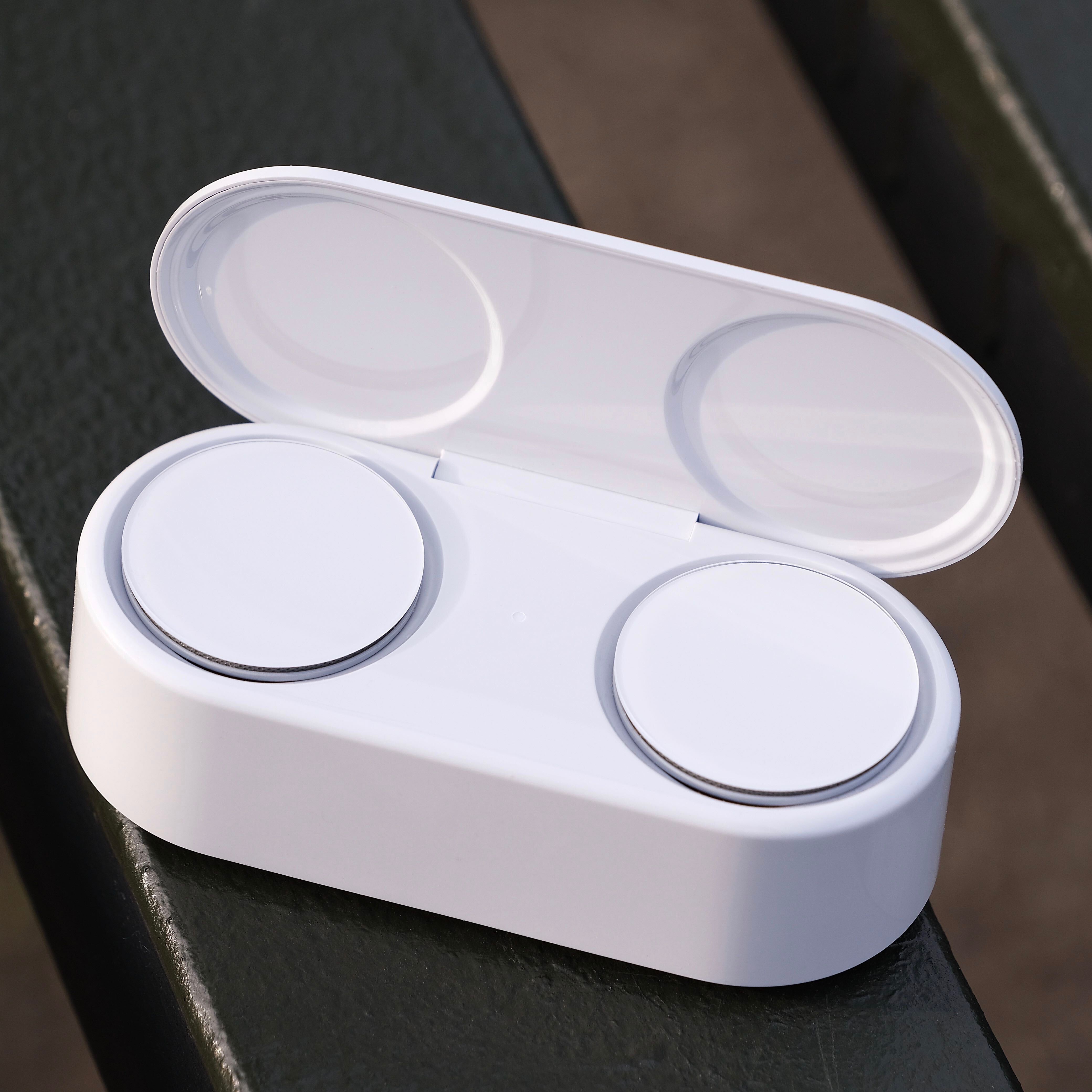 Fit and finish aren’t among those trade-offs, however. The Surface Earbuds are another example of Microsoft’s hardware chops, with fantastic build quality and a design that’s not afraid to stray from the competition. You’ll either love or hate the appearance of them. It can look like you’re wearing mid-2000s lobe gauges or PopSockets in your ears. Google’s second-gen Pixel Buds set a new standard for a subtle, discreet fit, but there’s nothing understated about these. The Surface Earbuds are large, bright white circles that are unabashedly present.

The Surface Buds are another showcase of Microsoft’s hardware chops.

But when you look at them up close and examine the details — the acoustic mesh grills, the foolproof way that the ear tips attach to the buds, and so forth — you’re reminded of Microsoft’s precision. The Surface Earbuds exude quality, even if you’re not sold on the style. They’re rated IPX4 water resistant, meaning they can endure splashes from any direction. Microsoft isn’t positioning these as fitness earbuds, but if they fit you well, they’ll be up to that task.

The Surface Earbuds come in a glossy, pill-shaped charging case with the Microsoft logo at the top. (The earbuds themselves lack any branding.) My case came a bit scuffed up right out of the box, which was disappointing, but the light gray color concealed those scratches well enough. There’s a USB-C port around back, a pairing button on the bottom, and that’s the extent of the case. Unfortunately, it doesn’t have wireless charging capabilities. But at under an inch tall and less than three inches wide, it’s very pocketable.

These earbuds have an open design — like the original AirPods — that rests in your ear instead of filling your ear canal. This approach has some downsides, but it does come with one benefit that you’ll notice immediately: terrific comfort. I could wear the Surface Earbuds for large chunks of the day without any discomfort or inner-ear pressure. Once they were in, I found giving them a slight twist helped lock the extra lump of silicone at the back of each ear tip into my ear lobe. (Microsoft provides three sizes of tips in the box.) This created a secure fit that kept hold for hours. They stay in very well for the most part, but the Surface Earbuds can come dislodged without much force, so just beware when changing your shirt or putting on a jacket.

The drawback of that openness is that you’ll hear a ton of surrounding noise when wearing the Surface Earbuds. It might not pose a problem while many of us remain at home, but you’ll need to really crank the volume to overcome a loud outdoor environment or noisy train. And once we all return to offices, you’ll have to ignore nearby conversations cutting into your music.

An open design also limits bass potential, which is always enhanced by a good in-ear seal. The Surface Earbuds don’t give you that, but they sound good regardless, with a balanced mix that felt nicely immersive as I listened through Jason Isbell’s new album Reunions. The audio is about as full as it can be considering all the air these buds let in, but the Surface Earbuds don’t match the detail and richness of pricier earbuds. And if you consider booming bass a necessity, you’ll want to look at other options that fully seal in the ear. Microsoft supports SBC and aptX Bluetooth codecs here — AAC remains absent — and I found the connection stability to be rock-solid during my fleeting time outside each day.

The Surface Earbuds can reach up to eight hours of continuous battery life before needing a recharge. If left on a table idle for 10 minutes, they’ll automatically power down to conserve battery. The case provides two additional refills for a total of 24 hours. You can monitor the remaining battery percentage for each earbud, but bizarrely, Microsoft doesn’t provide any way of checking the case’s remaining juice. You’ll know it needs a recharge when the single LED inside turns red, but that’s it. At a minimum, since nothing lights up on the earbuds when they’re dropped into place, Microsoft should’ve removed any guesswork by including separate lights to show charge level for the earbuds and case. Apple’s AirPods have the same lone LED, but Google, Sony, Jabra, and other companies have gotten this right with multiple indicator lights.

Considering the large, flat surface area of the Surface Earbuds, I expected their touch-sensitive controls would be a snap. Not quite. You can tap twice on either earbud to pause or play music. But Microsoft splits track controls and volume between the two sides. You swipe forward on the left earbud to skip a song or back to return to the previous one. And over on the right, you can swipe up or down to control volume. Microsoft’s gesture for bringing up Siri or Google Assistant (just tap and hold on either bud) can sometimes clash with these controls. And the swipe gestures on the left earbud proved fiddly in my experience. I had to swipe forward or back in a diagonal direction to get the track controls to register. I got the hang of it, but sadly, you can’t customize the controls; the only option Microsoft offers is disabling them altogether if you’d rather handle everything on-device.

The Surface Earbuds also completely omit features that I’ve come to expect, like an auto-pause function when you briefly remove one of them. With these, there’s no ear detection, and the music just keeps going. It’s just one of those things that’s hard to overlook at $200. On the plus side, Microsoft includes EQ customization in the Surface Audio app for Windows, Android, and iOS. The app is also what you’ll use to update the earbuds’ firmware. The charging case can only be updated when plugged into a Windows PC, though I can’t imagine you’ll need to do that with any regularity.

The Surface Earbuds can be used over Bluetooth without encountering any software agreements. However, you’ll need to use the Surface Audio app for Windows 10, Android, or iOS to customize the EQ, update the firmware, and adjust settings for the Earbuds.

Upon opening the app, you must agree to Microsoft’s software license terms, which include binding arbitration language and a class action waiver, among other conditions. Microsoft also spells out the diagnostic information it collects from the Surface Audio app.

Required data that the Surface Audio app collects can include:

Microsoft says you can provide additional, optional data, including:

Microsoft has been highlighting all the ways that the Surface Earbuds can help you be more productive with Office 365 apps. You can dictate text in apps like Word and Outlook. And if your dream has always been to control PowerPoint slideshows with a swipe of your earbud, this is your moment. But in reality, these Office 365 tricks aren’t unique to the Surface Earbuds. Odds are, you can do dictation and real-time caption translations with whatever earbuds you’re already using. What’s more disappointing for work life is that the Surface Earbuds are unable to pair with two devices simultaneously, such as your phone and your laptop. This is doubly frustrating since the Surface Headphones are capable of doing exactly that, but Microsoft hasn’t brought the same multipoint functionality here.

The mics inside the Surface Earbuds — two on each bud — at least provide excellent clarity for those Office features, and I’d put these neck and neck with AirPods as some of the best earbuds for making calls or videoconferencing. Technically, you can use either earbud independently. But the left one still depends on the right for a connection to your phone, so you’ll always need to have that right earbud nearby (in or out of the case) even when using the left in mono.

The Surface Earbuds have enough strengths — airy comfort, long battery life, and good voice quality — to outweigh their problem spots. But even the adjusted $200 price feels high. For that money, wireless charging is a sore omission, and the lack of multipoint pairing definitely stings for earbuds that are geared toward productivity.

If you’re put off by how regular in-ear buds feel in your ears, these are worth a try. But if that’s not a factor, there’s nothing about the Surface Earbuds that puts them in must-buy territory. Microsoft is certainly onto something, but showing up late has its consequences.