A new look with familiar highs and familiar lows

After several years of the same stale, hefty chassis, the Dell XPS 15 finally has a new look. It’s a similar redesign to the one the XPS 13 got earlier this year, and the same caveats apply. Listed out here, the tweaks Dell has made may seem insignificant, but they add up to a machine that looks and feels like an upgrade.

Currently, you can max the XPS out with a Core i7-10875H, 64GB of RAM, a 3840 x 2400 touchscreen, and a 2TB SSD for $2,988. Dell says there will be i9 options in the future, but I doubt I’d recommend those for most shoppers anyway. Not only will they cost more, but I have trouble believing a product this thin can really make the most of such a hefty processor without cooking itself to death. 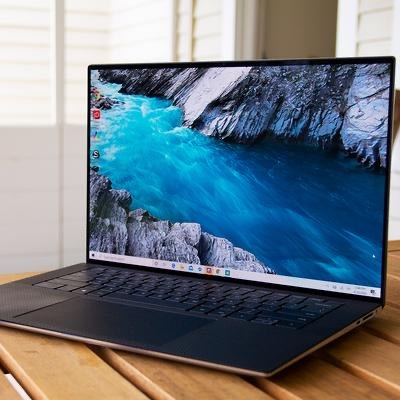 As for the visible changes, the bezels are one of the most noticeable. The new XPS has received Dell’s new four-sided Infinity Edge display with bezels that are quite thin. The panel really does appear to stretch from end to end. Seeing it feels a bit like viewing a fancy OLED TV. Dell says the laptop’s screen is 5 percent larger than its predecessor’s, with a 92.9 percent screen-to-body ratio.

Last year’s XPS 15 sported a chunky bottom bezel with a large Dell logo on it. That’s gone. Not only does its omission contribute to a more premium look (I always got major 2015 Inspiron vibes from the old bezel), but it also gives you some more screen to work with.

Say hello to the 16:10 aspect ratio, another welcome addition to the XPS 15. The touchscreen, made of Corning Gorilla Glass 6, has a 3840 x 2400 resolution, one of the highest resolutions you’ll find on a consumer laptop. It’s a world away from 16:9. I could comfortably use a couple of different windows and apps without having to zoom in or out and stack up dozens of Chrome and Edge tabs without getting too cramped.

There’s no OLED option yet this year, which is probably wise. That was a battery suck and hard to justify for everyday users. But this display is still nothing to sneeze at. I measured it up to 426 nits, but even at low settings in bright light, there was almost no glare. Colors were also spot on and quite vivid. (The screen covers 100 percent of the Adobe RGB gamut.) It’s all a joy to use, and I’m dreading going back to a laptop with a 16:9 panel.

It’s not just the screen; Dell has refined the rest of the chassis as well. You’ll see the same carbon-fiber palm rests and aluminum lid that are a staple of the XPS line. (I love the carbon-fiber texture, but it’s controversial and takes some getting used to.) But the metal bottom plate now also covers the edges and corners, which were black carbon fiber before. The large, visible display hinge has been replaced with a smaller, cleaner-looking one that’s entirely out of sight.

Dell has also placed speaker grilles on each side of the keyboard. (There are two tweeters in the base.) The XPS comes preinstalled with the Waves MaxxAudio Pro driver where you can enable 3D audio and toggle between various presets. Music sounded good, and the 3D feature made a noticeable difference.

To start using the Dell XPS 15, you’ll need to agree to the following:

Final tally: there are six mandatory agreements and nine optional agreements to use the XPS 15.

The keys are snappy

XPS keyboards and touchpads have always been among my favorite laptop peripherals, and Dell has made tweaks to both. The glass touchpad has grown by 62 percent (it’s 5.9 x 3.5 inches), making it one of the biggest you can get on a Windows machine. It’s as smooth and easy to click as ever. The keycaps are 9.7 percent larger than last year’s (they’re noticeably bigger), and the keys are snappy with 1.3mm of travel. I could maintain over 140 words per minute with very high accuracy. That’s much higher than I’ve scored on any recent laptop.

A couple of keys have moved around: the left and right arrows are larger than those of last year’s model, extending all the way up to the bottom of the Shift key, and the power button (which includes a fingerprint reader) is now in the top-right corner. If you don’t want to use the fingerprint reader, the infrared webcam supports Windows Hello facial recognition as well.

Finally, Dell has nixed the USB-A, HDMI, and power ports from the previous model; this one has three USB-C (two of which are Thunderbolt 3, and you can charge with any of them), a full-sized SD-card reader, a wedge lock slot, and an audio jack. That means the XPS 15 is now close to MacBook Pro levels of connectivity, though the card reader is a bonus feature that you don’t see every day. The XPS also ships with a USB-C to USB-A dongle to help with older peripherals.

The redesign is the main reason to buy this XPS 15, but the new processor and graphics card inside are both upgrades as well. Multitasking performance was as good as expected from an eight-core 10th Gen processor and healthy amount of RAM. I was able to run around a dozen Chrome tabs plus Slack, Spotify, YouTube videos, and some downloads in the background without a problem.

The Nvidia GTX 1650 Ti is a midrange graphics card, though. It’s not a great option for gaming unless you’re willing to bump the eye candy down. Anyone looking for a 15-inch gaming system has better options from MSI, Alienware, and Razer in or below this price range — and if you’re at all willing to consider a 14-incher, the exceptional Asus ROG Zephyrus G14 awaits. But the 1650 Ti can lend a hand in creative work and other demanding productivity tasks.

Unfortunately, as much as the XPS 15 has changed on the outside, the previous model’s struggles with cooling and power consumption remain. The laptop’s dual fans were often audible when I was multitasking, and they could be heard a room over when I was using Premiere Pro. The touchpad and palm rests stayed cool, but the keyboard was often toasty when the laptop was under any kind of load, and the undercarriage was often so hot during these times that I couldn’t hold the device on my lap. I don’t think Dell has quite figured out how to cool these chips in such a thin chassis.

In my first few runs through our battery test, which involved using the XPS 15 as my primary work driver on the Better Battery profile with the screen around 200 nits of brightness, I was only getting between 2:30 and 3:30 of juice. After troubleshooting the results with Dell, I found that the problem was McAfee (the 30-day trial of which comes preinstalled on the system). This program is apparently a huge drain, and after removing it, I started seeing around five hours and 45 minutes. I guess the moral of this story is that you should uninstall McAfee (which, of course, presents the question of why Dell is putting crapware on its $2,000 laptop in the first place).

Almost six hours of battery life isn’t terrible for a system with an H-series processor, a discrete GPU, and a high-resolution screen. But it’s a somewhat disappointing result compared to some competitors. My colleague Tom Warren got around seven hours out of Microsoft’s 15-inch Surface Book 3 with a similar app and browser load, and you can expect around eight hours out of the 16-inch MacBook Pro. The XPS only did a little bit better than the Gigabyte Aero 15, which has a more powerful GPU and an OLED screen; I got five hours and 22 minutes out of that workstation with the same methodology.

(Chrome is, of course, a power-intensive app. But switching out to Microsoft Edge didn’t improve things much. I got eight hours out of a standard 1080p video rundown test, but I doubt that many people are buying a $2,300 laptop just to loop movies.)

The battery life, the fans, and the cooling are marks against the Dell XPS 15. But they also aren’t new issues for this computer. It is disappointing that Dell hasn’t yet figured out a better thermal design or a way to cool a stronger GPU. And even for a workhorse like this, that battery life is only so-so.

But the primary features that have always made the XPS line a compelling buy — the exceptional keyboard and touchpad, the premium build quality, and the gorgeous screen — remain. And the various design tweaks, including the spacious bezel-less display, the wider keycaps, the slim form factor, and the expanded speakers conspire to give the XPS a modern, chic look and an upgraded user experience. If you’ve wanted to buy an XPS 15, but have been waiting for Dell to ditch the dated design, this model is what you’ve been waiting for.

It’s just not perfect yet.