Marshall’s Emberton is a basic but brilliant Bluetooth speaker

Share All sharing options for: Marshall’s Emberton is a basic but brilliant Bluetooth speaker

Marshall’s new $149 Emberton Bluetooth speaker gives the beloved Logitech Ultimate Ears Boom a run for its money. For starters, it charges over USB-C for quick, no-fuss charging, and it borrows the excellent joystick-like controls from Marshall’s recent lineup of headphones. Instead of having to learn a few combinations of buttons to change the song, or check the battery’s level, everything is dead-simple here. The remaining battery life is conveniently displayed at all times in an LED-lit window. To navigate, simply tilt the gold, spiralized nub in one of four labeled directions to adjust the volume or find the song you want. As some companies try to find clever ways to let you control your devices, such as swipes or gestures, there’s something to be said for physical buttons being easy, accessible, and fun.

The Emberton’s design might not strike a chord with everyone: it’s a brick-shaped speaker made to look like a portable guitar amplifier with metal grilles covering the front and back. The speaker is covered in a rugged, removable silicone sleeve that’s slipped on by default. This is Marshall’s most subdued speaker design yet, and it offers a simpler look than previous models, though it’s not as fashionable or as colorful as some other small Bluetooth speakers.

Our review of Marshall Emberton 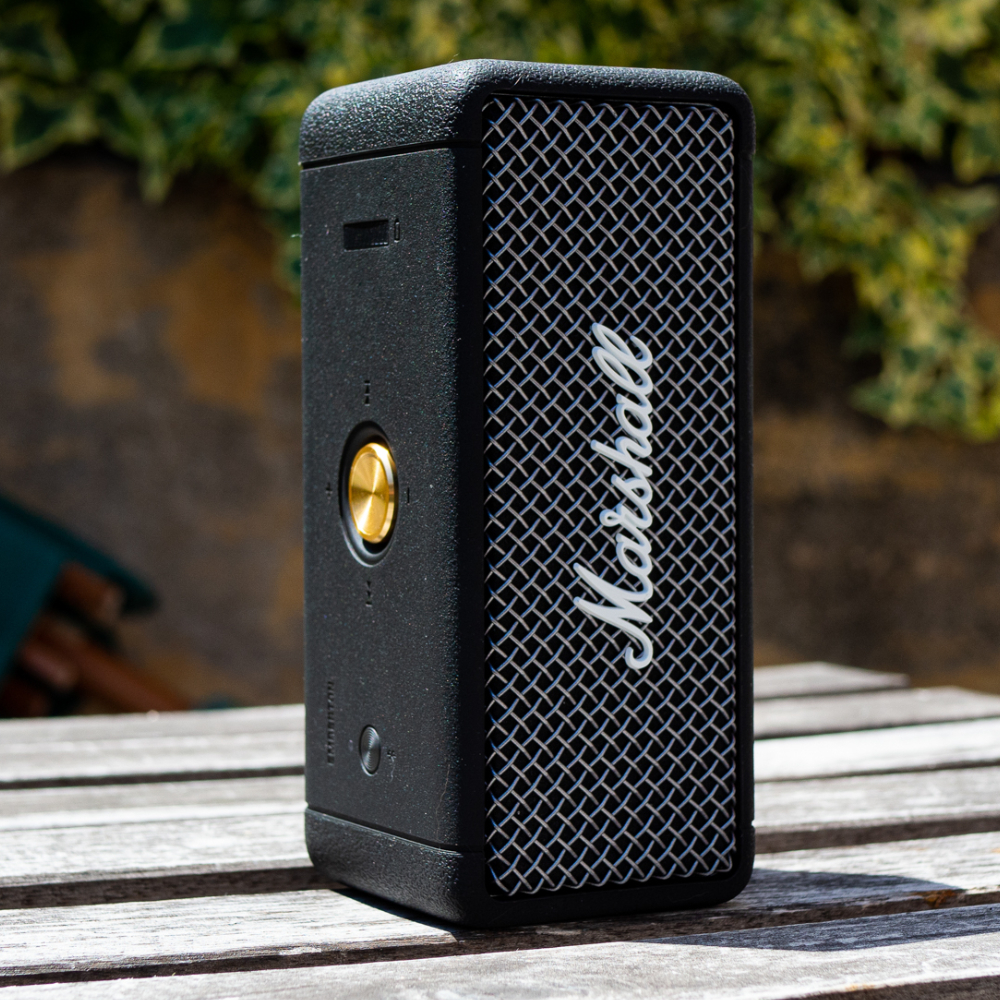 At 1.5 pounds, it feels far heftier than I expected a speaker of this size to be, though it doesn’t seem unwarranted given its long-lasting battery life. I’ve been using the Emberton nonstop since I got a review unit to test, and it easily hit the 20-hour lifespan claim when it was piping out music at medium volume. I can never mention this enough times because Ultimate Ears apparently hasn’t heard us yet, but USB-C charging is great to have.

Good battery life, IPX7-rated waterproofing, and USB-C charging are all great, but this speaker’s sound quality is what’s going to make me recommend it over other similarly sized and similarly priced models. Any category of music or my pick of podcasts sounded full-bodied with a surprising amount of bass and clarity in the mids and highs, with exceptional balance keeping them present in the sound. Little Dragon’s self-titled album is a good showcase for the little Emberton. It has intense mids and highs in the vocals and electronic instruments throughout, and the bass comes through in full effect to deliver a balanced, loud sound that sounds like it’s coming from something bigger. This speaker claims to offer 360-degree sound. It obviously can’t provide a true, all-encompassing sound since there aren’t speakers firing in every direction, though the effect comes close enough to sounding that way.

In terms of what this speaker cannot do, it doesn’t have a microphone, so if your phone is connected via Bluetooth, you’ll need to disconnect it to take calls. That also means the Emberton doesn’t have voice assistant support, which may or may not bother you. Lastly, it doesn’t sport any interesting app-based functionality like Ultimate Ears’ Boom speakers, which let you pair two or more of its speakers together wirelessly. I wasn’t expecting Marshall to copy the Boom’s feature set, but some extra effort wouldn’t have gone unnoticed. Also, while I’m nitpicking, I’m not the biggest fan of the startup chime that plays. It’s reminiscent of leveling up in Call of Duty, and that’s a vibe that’s incongruous with the kind of music I usually like to listen to. But it’s very possible that the issues I’ve listed here might not register as problematic for you.

The Marshall Emberton is easy to recommend if you’re looking for a small Bluetooth speaker with powerful sound, long-lasting battery, and USB-C charging — the latter of which is currently a rarity in the market. But $150 for this speaker seems just a tad too high, given that it doesn’t have a microphone or much else in the way of interesting functionality. Still, it’s a stellar value based on everything you’re getting here.