Lenovo’s Flex 5G has a lot to live up to as the world’s first 5G-enabled Windows 10 2-in-1 laptop. Not just that, it also needs to convince people that putting ARM-based processors in a Windows laptop is a perk, not a liability that spells incompatibility doom for those who rely on a lot of apps. No pressure.

First, let’s start with 5G. This is technically the world’s best 5G-ready laptop — only because there are currently no alternatives. As you’d expect and hope for given its $1,399 price, its support for Verizon’s ultra-wideband (UWB) mmWave 5G network means that under ideal conditions, downloads and uploads absolutely fly. But it’s only as good as Verizon’s network currently allows, and given that its low-band sub-6GHz spectrum (which this laptop also supports) won’t come until later in 2020, it takes some serious effort to find a fast connection.

5G: everything you need to know

Eventually, the interplay of mmWave and sub-6GHz spectrum means the fast connection will find you, but until then, you’ll have to find it yourself. If you have to travel far out of your way just to take advantage of this laptop’s defining feature, I’d suggest skipping this laptop altogether for now.

Our review of Lenovo Flex 5G 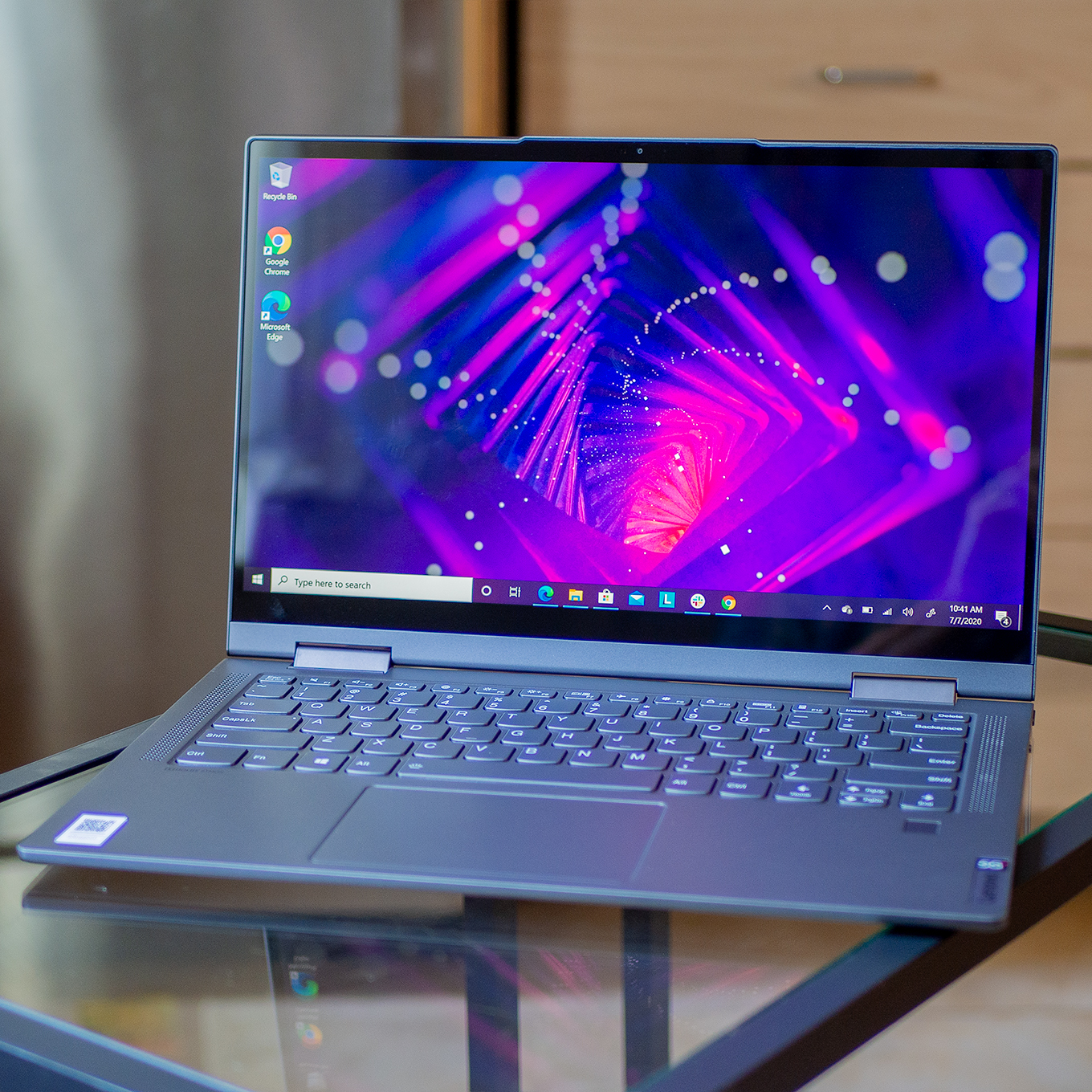 Using this machine in range of Verizon’s 5G nodes in Brooklyn, at best, serves up connection speeds that are about twice as fast as what I get on my PC plugged in via Ethernet at home. On average, I got around 500Mbps download speeds and 50Mbps upload (note: Verizon still pushes uploads through its LTE network). I never hit gigabit speeds like my colleague Chris Welch did in a previous Verizon 5G test using phones, but the performance was far better than I’ve ever experienced on LTE. In an area where I was getting 335Mbps download and 61Mbps upload, it took the laptop about 15 seconds to download a 355MB video from Google Drive and about one minute to upload it.

Hitting those fast speeds was great, but finding the sweet spot was like finding an invisible needle in a broadly defined haystack, thanks to Verizon’s unclear 5G coverage map. I traveled to five different spots said to have 5G, and I found that having 5G signal and losing it can come down to walking 20 feet or turning a street corner. Just like that, close to half-gigabit download speeds go down to 170Mbps. That’s still very fast, but it illustrates how touchy mmWave is and why it’s not worth relying on fully right now regardless of the device you’re using as a vehicle to access it. Sometimes, the laptop failed to pick up on the 5G signal entirely, though it’s tough to know whether I should blame the laptop, or perhaps it just wasn’t working in the area for whatever reason. I don’t have a 5G phone, so I couldn’t test it on a second device.

I’m lucky to have several nearby locations in my area where Verizon has UWB nodes because this isn’t representative of every city in the US. Though, since mmWave has such a short, delicate range, I wouldn’t call the process of finding a 5G hotspot even in a well-served area convenient at all — especially during a pandemic.

All said, being able to use 5G on a laptop is an impressive feat, and it’s something that I find far more useful to have in this form factor than in a smartphone. The Flex 5G’s 2-in-1 design adds more use cases with its tent mode, allowing you to post up and stream a movie over 5G if you want. You can also twist the screen around to use it as a tablet. Plus, Windows 10, even in the limited ARM-based version available here, grants me more flexibility for work in terms of application support and multitasking than a phone can.

Though, with the good comes a disproportionately high heaping of disappointment here if you’re hoping this is a no-compromises laptop. The Flex 5G’s ARM processor is more powerful than I expected it to be, but it presents some serious limitations in terms of apps you can run in Windows 10. Ultimately, this laptop suffers a similar fate of the Surface Pro X, another machine built with an ARM processor.

I was met with several incompatibility errors when trying to install a few apps that I’d rather not live without, like Affinity Photo or Xbox Game Pass. You might be able to get some apps working through the built-in emulation settings available in Windows 10 Pro, but even those can’t fix the big issue that 64-bit x86 apps still cannot run here. This is disappointing, though I’m pleased with the progress Microsoft has made to find ARM-compatible apps in its Microsoft Store. My colleague Dieter Bohn encountered incompatible apps that he purchased through the store in his review the Surface Pro X, though it seems much harder to make that mistake now because, according to Microsoft, the store automatically filters the store to show compatible apps. As such, I couldn’t spot any apps within view that didn’t work on the Flex 5G, though there might be outliers if you’re looking for a specific app or game.

I went on a downloading spree to see what kinds of things would work, and it was predictably hit-or-miss. The .exe file for Slack that automatically downloads from its site wouldn’t install since I didn’t have the right kind of processor, though the version on the Microsoft Store worked fine. Also, don’t count on it to run Photoshop, let alone even download it. Adobe claimed that support is coming to Creative Cloud apps on ARM processors, but that still isn’t here.

This is far from a gaming laptop, but I was surprised that games like Undertale, BioShock, and Dead Cells ran, and did so at a playable frame rate at the screen’s full 1080p resolution. Though, all other games I tried, including Persona 4 Golden, Abzû, and Hades, show an error on Steam that I need a processor capable of running 64-bit x86 apps. Get used to seeing that.

On the bright side, Microsoft’s Edge browser built on Chromium runs very well. The most recent batch of updates have granted it native support for ARM processors, and I found it to be much faster at loading pages and general navigation than Google Chrome. It seems to drain the battery slower, too. What’s more, Edge’s Progressive Web Apps are a clever way to get around some, but not all, of those app incompatibilities. For example, Spotify’s web player runs smoother than trying to use the app that’s available on the Microsoft Store. Installing it as a web app makes it feel like a dedicated app, so that worked well in some limited cases.

To use the Flex 5G, you have to agree to:

One of the big advantages of ARM compared to an Intel or AMD CPU is the efficiency and its impact on stretching out the battery life. Lenovo claims 24 hours of battery life with the Snapdragon 8cx with 5G, though you’ll experience less when you’re tethered to 5G service. To give an idea of its longevity, I brought the Flex 5G around to connect to various 5G spots in my neighborhood, where I uploaded and downloaded a 350MB video several times. I then stopped to have a Google Meet video call, type this review, and talk over Slack for 30 minutes. Now, after another 90 minutes of using it at home over LTE, it’s down to 84 percent. By the end of this long day of putting it through the paces, I was only able to bring it down to 69 percent.

This kind of intense, multi-hour adventure with the Flex 5G proves how reliable and efficient its battery and fanless chipset are. No matter what your use cases are, I think this laptop can easily make it through a demanding day of work or two, plus after-work activities, even if you’re relying on its cellular connection the entire time.

Unlike the Surface Pro X and the Galaxy Book S, another ARM-based Windows 10 laptop, the Flex 5G isn’t fitted with what I consider to be flagship-quality hardware. This laptop was originally called the Yoga 5G when it debuted at CES 2020, and despite it ending up with a slightly different name now, this machine is cut from a familiar cloth. The design would be fine in a traditional $700 2-in-1 laptop, but its generic, plasticky build doesn’t make its $1,399.99 price feel justified. Though, that doesn’t mean there aren’t a few niceties. I love the keyboard and the grippy, matte-textured chassis that make it easy to carry around with confidence that I won’t drop it. The 14-inch 1080p IPS touchscreen is also a high point. It’s hard to read in direct sunlight, which doesn’t bode well when it comes to hunting for 5G service outdoors, but it’s crisp, bright, and has generously wide viewing angles when used indoors.

There will be better 5G laptops in the future, but like the state of 5G in general, we’re not there yet. And it’s not clear when more options that support 5G will arrive, be cheaper, easier to find, or more convenient to use. For right now, Lenovo’s Flex 5G is an incredibly safe bet as a first-generation device. Compared to what the first round of 5G-enabled phones looked like, there’s not much about the design that sets it apart from other laptops. And until support for ARM processors improves drastically, the fast but fleeting 5G service that’s available currently through Verizon isn’t appealing enough to make this investment — or the monthly cost for Verizon’s 5G — worthwhile.

Correction, July 10th, 2020: This review originally stated that Microsoft didn’t filter its store’s app offering based on the ARM processor. According to a comment from Microsoft, it now automatically filters compatible apps when you’re logged in.