Traditionally, the Envy line has been HP’s midrange option; it’s a rung above the budget Pavilion, but a rung below the flagship Spectre. This model, which starts at $699, really blurs the latter line. It’s easily the best laptop under $1,000 that you can buy right now. Not only does the 2020 Envy x360 look as nice and perform as well as last year’s Spectre x360 (which starts at $1,099), but using it also feels quite similar to using HP’s $1,500 Elite Dragonfly, one of the best business notebooks on the market.

The six-core 4500U is intended to compete with Intel’s U-series Core i5, but its performance is comparable to that of an i7. It flies. Throughout my everyday browsing and streaming, as well as my fairly heavy load of office work that includes around a dozen apps and Chrome tabs with occasional downloads, Zoom calls, editing photos, and copying files, everything was smooth with no sign of slowdown. 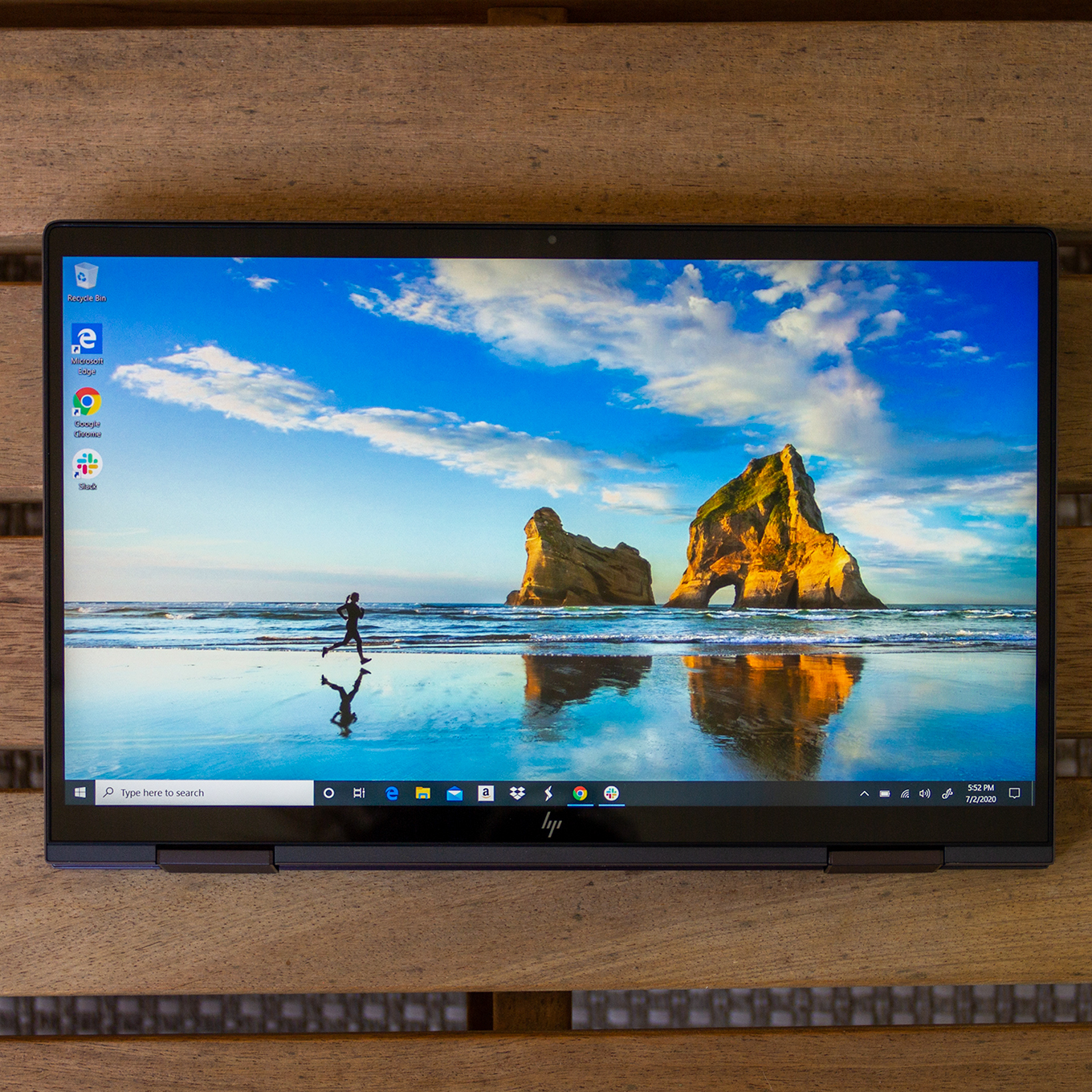 Even more impressive are AMD’s integrated Radeon graphics, which can handle some gaming. I was able to run Overwatch at 1080p at an average of 70fps on Medium and 62fps on High — both were quite playable. (The keyboard did get uncomfortably hot, though). Those results are comparable to what you can expect from a lower-powered discrete GPU like a 10W GeForce MX150. It’s impressive stuff for integrated graphics.

The system did not prove as well-optimized for video editing, unfortunately. I attempted to run our routine video test (which involves exporting a five-minute, 33-second 4K video) multiple times using hardware acceleration, and Adobe Premiere Pro consistently crashed during the export. Disabling the hardware acceleration in Premiere and relying solely on software got the job done, but it took an hour and 15 minutes. So if you’ll need to be working with Premiere Pro for video on the go, don’t buy this (at least until Adobe fixes that problem).

It’s not just the Envy’s chip that stands out; it’s the combination of the chip and the chassis. AMD processors have mostly been fodder for budget and midrange laptops for the past few years. It’s been uncommon to find an AMD chip in a premium option (in the vein of Lenovo’s Thinkpad Carbon, the HP Spectre, or Acer’s Swift 5). That’s what’s so exciting about this laptop: It pairs the Ryzen 4500U with a high-end design that looks and feels premium.

This is the nicest-looking Envy I’ve ever seen. Next to last year’s model, this one has a sleeker and chicer vibe. A big part of that is the display: the 2020 Envy has an 88 percent screen-to-body ratio, compared to 79 percent on last year’s model. Twenty-four percent has been shaved off the top bezel’s size, and while HP hasn’t fully eliminated its bottom bezel (as Dell virtually did with the most recent XPS 13), it has sliced off over 13mm. The result is that HP has been able to cram a 13-inch display into a much more compact footprint: the chassis is over 17mm shorter.

The displays on HP’s midrange laptops have knocked it out of the park in the last few years, and this Envy is no exception. The 13.3-inch 1080p display doesn’t have the contrast that you’ll see on higher-end laptops like the Spectre, but it’s certainly better than I’d expect from an $800 device.

HP sells 300-nit, 400-nit, and 1000-nit options, which all have 1080p resolution. You may want the brightest configuration if you plan on doing work outdoors, but the 400-nit version, which I tested, is just fine for indoor use. Colors are excellent, details are crisp, and I never had problems with glare, despite the panel’s glossy texture. The screen also supports HP’s MPP2.0 pen, though there’s no place on the laptop itself to store it when not in use. One thing to note: it is a 16:9 screen, so you won’t have as much vertical space for web browsing and document work as you would with a 16:10 machine like the Dell XPS 13 or a 3:2 laptop like the Surface Book 3. It’s perhaps the one demerit I can make against this display.

The Envy isn’t the lightest 13-inch laptop around at 2.9 pounds — I wouldn’t have wanted to carry it around with one hand or use it as a tablet for long periods of time — but the plus side is that it’s quite well-built and sturdy. There’s almost no flex in the screen or deck, and the whole aluminum chassis feels polished and professional. Holding it feels more like holding the Dragonfly than many midrange competitors. To nitpick, the hinge is a bit loose; occasionally, when I was trying to use the Envy with the screen tilted far back, it would inadvertently slip into tablet mode. This is far from a deal-breaking problem, of course.

The company has added a few hotkeys to the keyboard. There are kill switches for the microphone and webcam. F1 brings up Windows 10 online support, F4 toggles the keyboard’s backlighting, and F12 conjures the HP Command Center where you can adjust the Envy’s thermal profile (more on that later). There’s a learning curve here — I unintentionally bricked the mic a couple times — but each key has an LED indicator to help track what’s on and off.

The keys themselves are both firm and quiet, with a smooth and comfortable texture. It’s an excellent keyboard. At the risk of sounding like a broken record, typing on it feels like typing on the Dragonfly.

For ports, there’s a microSD slot, two USB-A, and a USB-C (no Thunderbolt 3, sadly). High-end laptops this thin often eliminate USB-A ports, but HP has managed to squeeze them in with trapdoor hinges that cover the bottom half. I like this selection because plenty of people still own older peripherals that use USB-A. In a perfect world, given the lack of Thunderbolt, HDMI would be on my wishlist.

The Envy comes with stereo speakers and a Bang & Olufsen audio control center. There, you can swap between presets for Music, Movie, and Voice, as well as equalizer settings for different tunes. The speakers sounded good (as laptop speakers go), and I didn’t mind watching videos or playing Spotify without anything external plugged in. The Voice profile even helped mitigate some background noise during Zoom calls.

As mentioned earlier, the Envy was often warm but never noticeably hot during my daily office work. Only during gaming was it uncomfortable to the touch. In HP’s Command Center, you can change the Thermal Profile. There’s HP’s Recommended preset, Comfort (to keep things cool), and Quiet (to keep the fans down). I mostly used HP’s Recommended setting for my daily tasks, and while I could usually hear a bit of a dull whine if I listened for it, the fans weren’t audible from a few feet away. (They’re quite loud on Performance, of course, which you’ll want to use for the best gaming results.)

To start using the HP Envy x360 you’ll need to agree to the following:

That’s six mandatory agreements and 19 optional agreements to use the Envy x360.

Battery life is also good. With brightness around 200 nits, and with power and fans on HP’s recommended profile, I averaged about eight hours on a charge. That should get you through a workday and is longer than we got with the latest Spectre x360. (Of course, mileage will vary with more demanding tasks.)

Finally, bloatware is sometimes a concern on sub-$1,000 laptops. The device does come with some preinstalled, including McAfee, ExpressVPN, and Candy Crush, which you may want to dump to free up storage. But refreshingly, I didn’t encounter intrusive pop-ups or any other annoying stuff.

Reviews of budget and midrange laptops are often a question of what you’re trading off for that lower price point. I’ve pointed out some places where the Envy doesn’t quite measure up to the best laptops on the market (the dimmer screen, the wobblier hinge, the aspect ratio, the video editing troubles), but the only reason we’re even having that discussion is that this laptop feels like it’s competing with the top of the line. Between the Envy x360 and other $800 laptops, there’s no contest. This is aiming at the big leagues; this is a Spectre.

The thesis of this review is that I have almost no complaints. This is a superb computer, and it’s frankly bizarre that it’s only $800. Don’t buy last year’s Spectre. Buy this.