The 17-inch XPS tips the scales

Yes, it has a 17-inch screen. Yes, it has high-powered specs including an H-series processor and an RTX GPU. But compared to many other laptops available today, it’s really heavy — it’s about five and a half pounds. Some folks might enjoy hefting a five-and-a-half-pound laptop around the house or in their backpack during the day. But that’s not me, and I doubt it’s most people.

Which begs the question: why use this instead of a desktop? It’s got good chips and a big screen, but a desktop has better chips and a bigger screen. On the flip side: if you want something portable that’s built like an Ultrabook, why not buy a 15- or 16-inch machine that’s actually practical to carry around?

The question is whether the extra screen space and the bump in performance are large enough to be worth the extra pounds. They are to some people — but probably only to the sort of person whose workload will take full advantage of both. 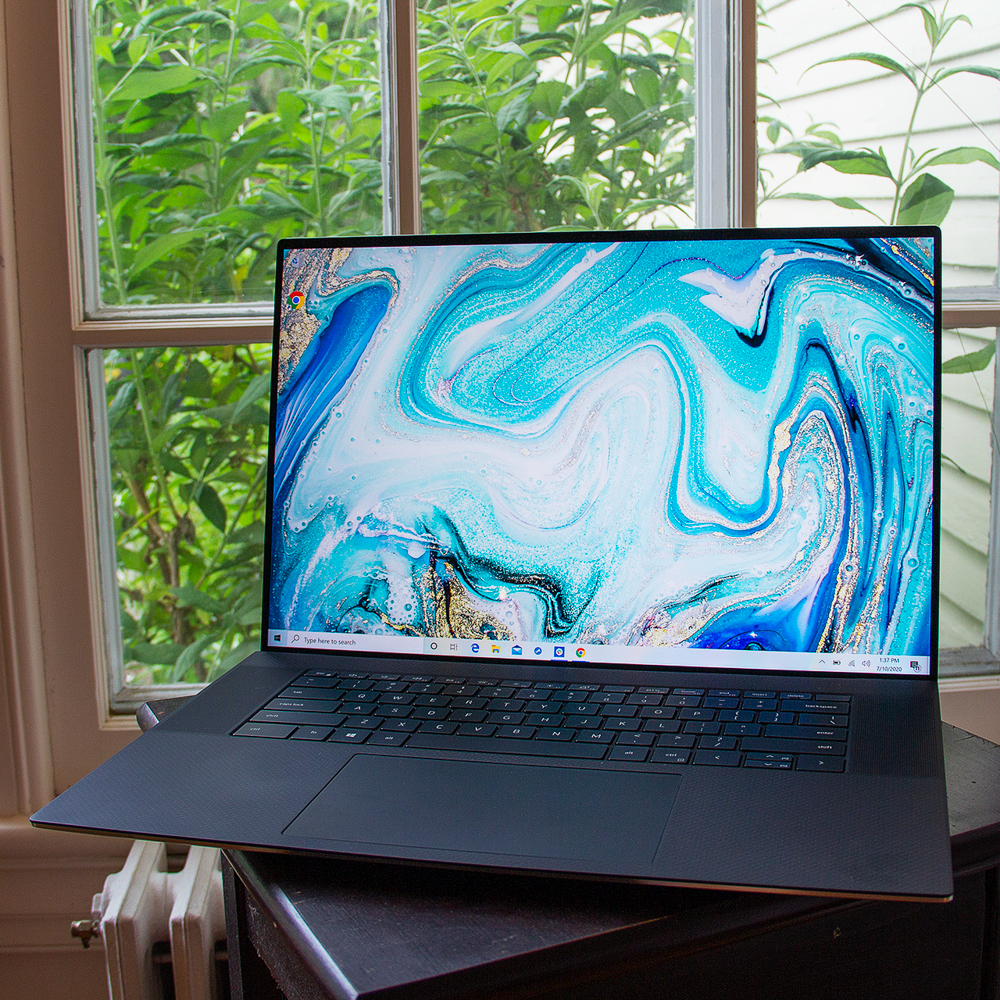 The most exciting feature is, of course, the screen. I doubt you’re considering buying a 17-inch laptop unless you have some idea of how big that is. For those who don’t: it feels like using a desktop monitor. I always split the screen between two or three open windows, whether I was working in Chrome, editing multiple photos, or Slacking while streaming video, and I was quite comfortable. I never once had to zoom out to see a full webpage. The 16:10 aspect ratio gives you an extra bit of vertical space, in addition to space on the sides.

But if you don’t often do this sort of multitasking, it’s possible the screen is too big for you. It’s not practical, for example, to use a Chrome window fullscreen because you’ll have frustrating amounts of white space on either side.

It’s also quite a nice display, with a 3840 x 2400 resolution. That’s slightly higher than standard 4K screens, which are 3840 x 2160. Colors looked good (about on par with the MacBook Pro), with deep blacks and clear details. I watched part of Infinity War, and the characters’ faces were so big that I could see wrinkles in expressions and individual strands of hair. Going back to smaller screens — even very good ones like that of the MacBook Pro 13 — made everything look miniature. The XPS covers 100 percent of the Adobe RGB gamut, and it’s bright enough to use both indoors and outdoors (with a bit of glare).

The more impressive aspect of this screen, though, is that Dell has managed to fit it into a chassis that’s smaller than those of most 17-inch laptops and a decent number of 15-inch models as well. It has a 93.7 percent screen-to-body ratio, which Dell says is higher than any competitors. The bezels are tiny — particularly the bottom chunk, which sported a large Dell logo on previous XPS models. In blunt terms, there’s just a huge amount of screen right in front of your eyes.

It looks and feels like a very nice laptop

If you’ve been keeping up with this year’s XPS line, the 17’s general vibe should be familiar. Dell majorly redesigned the XPS 13 and 15 this year, with noticeable upgrades to their chassis and builds. There wasn’t an XPS 17 last year (Dell hasn’t released one for almost a decade), but the 2020 model has the same recognizable characteristics as its current counterparts. The laptop has a sleek aluminum chassis, carbon-fiber palm rests, and a Gorilla Glass screen. It’s compact (14.74 x 9.76 x 0.77 inches) and incredibly sturdy; it feels and looks like a very nice laptop.

The XPS 17’s thinness can be deceiving, though; it’s heavier than it looks. The exact weight varies by configuration: the non-touch model with a 56Wh battery starts at 4.65 pounds. I have the touchscreen model with a 97Wh battery, which is 5.53 pounds. That’s over a pound heavier than the XPS 15, so, again, that’s the price of the extra screen.

Much of the other “laptop stuff” is also standard XPS fare. Like the XPS 15, there are upward-firing speakers on each side of the keyboard (there are two 1.5W tweeters and two 2.5W woofers). They produce impressive audio that’s close to that of a decent external speaker. They even manage audible bass, which is a rarity among laptop speakers.

On the sides, there are four Thunderbolt 3 USB-C ports (which support charging and DisplayPort) in addition to a full-sized SD card reader, a headphone jack, and a wedge-shaped lock slot. Dell throws a USB-C to USB-A 3.0 dongle and HDMI 2.0 adapter in the box. It would be nice to see a USB-A or Ethernet jack on a laptop of this size, but it’s a slightly better selection than the MacBook Pro 16, which lacks the SD slot.

Battery life from the 97Wh model is quite good as far as 4K workstations go. I put the XPS through my daily load of office work (including multitasking between eight to 12 Chrome tabs and apps like Slack and Spotify, with the screen around 200 nits of brightness) and usually got between seven and eight hours. That’s much better than I got running the same test on the XPS 15 (which has a smaller battery), and it’s comparable to results we saw from the MacBook Pro 16. The 17 comes with a 130W charger to boot.

The downside of the tiny top bezel, as we’ve seen from other XPS models, is that there’s not a ton of room for a good webcam. The 2.25mm, 720p camera supports Windows Hello facial recognition, which works just fine, but I was grainy and washed out on video calls. You can also sign in with a fingerprint reader that’s built into the power button in the top right corner of the keyboard.

Finally, XPS keyboards and touchpads are always among my favorite laptop inputs, and these keep up the trend. The keyboard, in particular, is a joy, with 1.3mm of travel in the keys. They’re a bit flatter than some of my favorite keyboards, but they have such a nice texture and satisfying click that I didn’t mind.

The glass touchpad is massive at 5.8 x 3.5 inches and clicks with an easy, quiet thunk. Both of my palms were always touching it while I typed, but thankfully there were no issues with palm rejection. The benefit of that size is that I never ran out of space for scrolling or multi-finger gestures. For me, though, it was a bit too big; the place where it was natural for my right hand to reach was still in right-click territory, and I had to either stretch my fingers or lift and move my wrist to reach the left half. Fellow righties with small hands, take note.

To start using the Dell XPS 17, you’ll need to agree to the following:

In total, that’s six mandatory agreements and 17 optional agreements to use the XPS 17.

The system did a good job with less demanding work — certainly better than the XPS 15, which got quite toasty under any sort of load in my testing. The 17 was never cold, but it also never got uncomfortably warm during any of my daily multitasking. I also never heard the fans, which Dell refers to as “dual opposite outlet fans.”

Under heavier loads, the cooling had more trouble. Performance looks to be thermally limited: through four loops of Cinebench R20, the CPU stayed consistently in the mid 90s (Celsius) and couldn’t maintain boost clocks. It dropped down to 89-90 degrees Celsius during the fifth run.

But it was still more than capable of handling demanding tasks like video work. In a test that involved exporting five minutes and 33 seconds of 4K video in Adobe Premiere Pro, the XPS 17 finished the job in three minutes and 58 seconds. That’s a lot better than we got for the MacBook Pro 16 and slightly ahead of the Dell XPS 15 (which finished the same export in four minutes and 23 seconds) and Microsoft’s 15-inch Surface Book 3. But it’s over a full minute behind the Gigabyte AERO 15, which has a stronger GPU and beefier cooling system.

The XPS 17 isn’t a gaming laptop (no high refresh-rate screen options, for one) and given that, the gaming results were decent but not mind-blowing. Nvidia’s RTX GPUs are so named because they’re able to handle ray tracing, but the 2060 Max Q is the lowest tier of the line, and it’s not quite capable of handling the combination of ray tracing and 4K resolution. The XPS 17 ran Shadow of the Tomb Raider (native resolution, medium settings) at an average of 24fps with ray tracing on and 32fps with ray tracing off. That should give you an idea of this system’s limits — you’ll want to knock down the resolution or the graphics detail to achieve playable frame rates. If you’re willing to do that and don’t mind a 60fps cap, it can double as a portable gaming machine.

So, is the XPS 17 bigger and more powerful than the XPS 15? Yes. Is it better than other 17-inch rigs, like the LG Gram 17? Yes, by a mile. But those laptops are still pretty good, and they’re much lighter than five and a half pounds. You’re only likely to see life-changing improvements if you’re often doing tasks that take full advantage of the powerful chips.

In short, this isn’t the best laptop for anyone who’s mostly working in Chrome around the house or in libraries or coffee shops. It’s really for power users who might need to occasionally work on the go and who have found that smaller screens and lower-powered systems fall short of their needs. For that person, this is the best laptop to buy.