Share All sharing options for: Dell’s G5 15 SE is both an affordable and excellent gaming laptop

Dell’s G5 15 SE is focused. It’s not the best-looking gaming laptop or the fastest out there, but starting at $879.99, its AMD Ryzen processor and RX 5600M graphics chip make for a great tag team. Along with other speedy components like fast RAM, an NVMe SSD, and a 144Hz refresh rate display, this Dell gaming laptop undercuts and outruns the competition in its price range.

The G5 doesn’t have phenomenal battery stamina like other AMD-powered laptops we’ve recently reviewed, but it’s a great midrange desktop replacement that can play most modern games at their highest graphical settings without a fuss. Plenty of gaming laptops can do that, but this one stands out solely because it won’t cost you an extravagant amount of cash to get one.

The most powerful configuration costs $1,199.99 at the time of publishing, which is the one that I’ve been testing. Spending this much gets you AMD’s fast and efficient 7nm Ryzen 7 4800H based on the Zen 2 architecture, along with the Radeon RX 5600M graphics chip. The 4800H is a 45W processor that rivals Intel’s Core i7-10875H with base clock and boost speeds, and also for having eight cores and 16 threads. Notably, AMD’s Ryzen 7 chip has found its way into cheaper gaming laptops like this one. The Core i7-10875H — at least, so far — is reserved for far more expensive options.

You don’t have to spend $1,200 to get decent performance, though. The Ryzen 5 CPU that comes standard in the G5 15 SE sizes up the Intel Core i7-10750H processor found in several gaming laptops that actually might cost you a little more. You’ll get the biggest boost by upgrading to the Ryzen 7, though both are 45W chips. So, whether you’re locked into a budget of $900 or have enough to get the upgraded model that I’m using, both configurations punch above Intel processors commonly found in their respective price ranges. That’s really the takeaway with this machine: AMD has Intel’s mainstream mobile gaming processors cornered both in terms of value and performance. 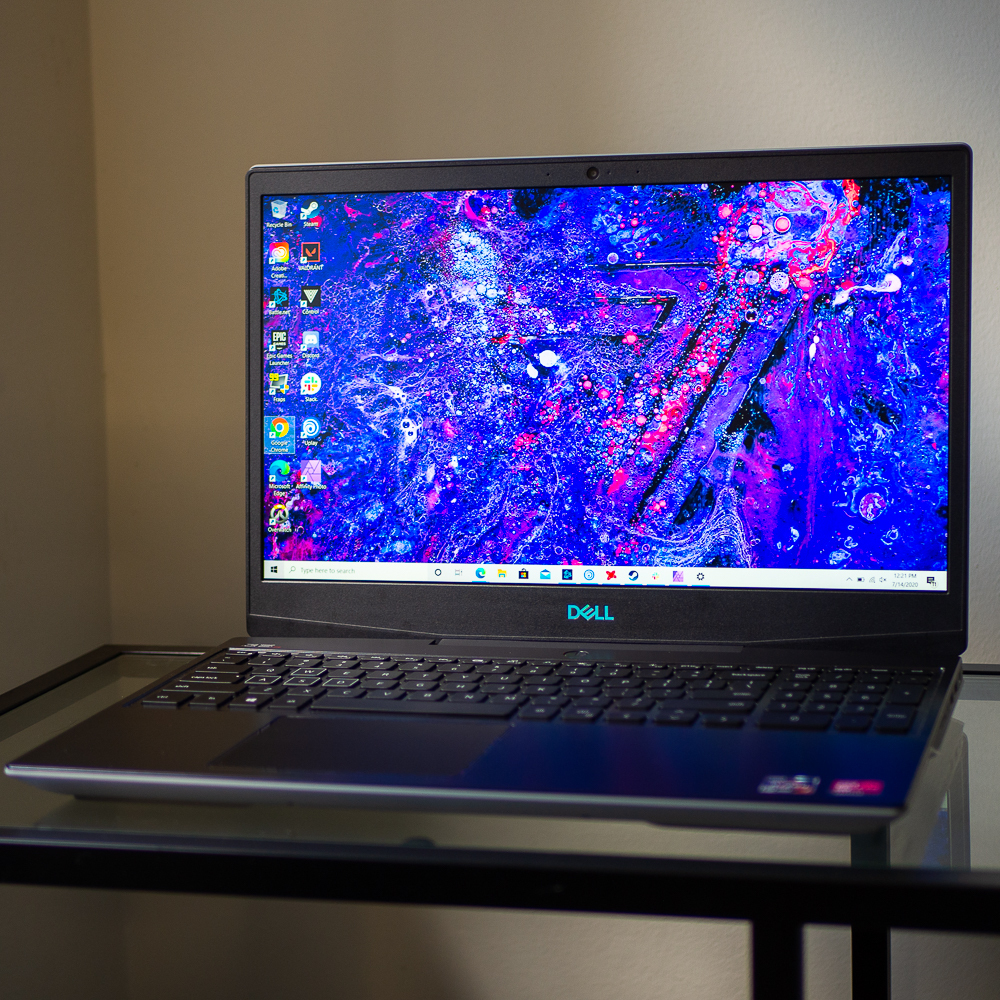 To see how capable the processor in my review unit is, I disabled the discrete RX 5600M graphics driver for fun to see if the Ryzen 7 4800H could handle Grand Theft Auto V’s intensive graphics benchmark. It seemed like a fool’s errand when I started out, but the benchmark running with the lowest graphical settings at 1080p achieved a relatively steady 60 frames per second without any hand-holding with a GPU. That was twice as fast compared to stats I collected from a machine running solely on the Intel Core i7-10750H. This test proves that this processor rips and tears. It also showcases how having the 5600M graphics further adds to the performance.

I tried out a slew of other games on this laptop to get a sense of its graphical chops, including Grand Theft Auto Online, Ori and the Will of the Wisps, Disco Elysium, Rocket League, Control, and Apex Legends. Each game registered nearly 100 frames per second on automatically recommended settings (usually near their highest settings available) at the display’s native 1080p resolution, which is exactly what I want out of a gaming laptop. Games that run at 100+ frames per second look especially good since this model I’m testing has a 144Hz refresh rate FreeSync screen that displays graphics without tearing or distortion.

(Note: The base model comes with a 60Hz display, though Dell told me that it plans to raise the standard refresh rate in the base configuration from 60Hz to 120Hz later this summer once it sells out, and it doesn’t expect the price to increase. The 144Hz option will continue to exist for higher-end models, like the one I tested.)

Most games run with some graphical settings set to max without dropping below — or at least too far below — a smooth 60 frames per second, though the mileage varies depending on the title. GTA Online, for example, averaged 55 frames per second with some of the more advanced shadow and anti-aliasing options switched on, but the game looks nearly just as good with those resource-intensive settings switched off. Metro Exodus, another game that puts hardware to task, also averaged 55 frames per second with settings adjusted to high on the benchmark, and that one was a little more shaky in terms of performance.

The Radeon RX 5600M is a midrange graphics chip that doesn’t perform as well in most cases as Nvidia’s GeForce RTX 2060, though it’s far better than the experience I had with the GTX 1650 built into the Lenovo IdeaPad Gaming 3 I reviewed recently. In the G5, the RX 5600M’s performance is given a boost by AMD’s new SmartShift feature, which dynamically pushes power between the CPU and GPU depending on where it’s needed most. It’s tough to tell when this is working in real time, though a Dell spokesperson told me that the feature is built into the BIOS level and into the drivers, and that it’s always running. Without this tight integration, I’m not sure I’d recommend getting just any laptop built with the RX 5600M. I can’t argue with the results here, though.

Aside from gaming, the performance in day-to-day tasks is also exemplary for the price. The G5 15 SE doesn’t slow down with over 30 Microsoft Edge tabs open, along with Spotify, Affinity Photo, and Slack. I was also pleased with how quickly it can export video in Adobe Premiere Pro. It crunched out a five-minute, 33-second 4K export in seven and a half minutes. That’s not a bad result, though I wouldn’t recommend this machine to someone who specializes in creative work. To its credit, it stayed relatively quiet throughout the export process, though it did get toasty at about 100 degrees Celsius while plugged in.

On top of the powerful processor, my review unit has 16GB of DDR4 RAM clocked at 3,200MHz aided by fast NVMe M.2 storage (both of which are configurable at the time of purchase or by yourself if you feel comfortable opening it up). I didn’t experience many general performance issues, but there was one nagging problem I couldn’t escape. Every 20 or so minutes, the computer locks up for about 10 seconds. Background operations keep going, but the mouse pointer mysteriously disappears and my current application freezes. A Dell spokesperson told me that this problem isn’t widespread, and that it could be the result of a recent Windows update throwing something out of whack. But when I uninstalled as many recent updates as I could, the issue still lingered.

With its gaming focus over productivity, the G5 unsurprisingly doesn’t fare nearly as well in the battery department as other recent AMD-powered machines. I averaged about three hours of battery life on the “Better Battery” power profile with the screened dimmed to around 75 percent of its total 300 nits potential. That’s not a surprising number for a gaming laptop with a 51Wh battery and a 144Hz FreeSync display, but it’s decidedly not great compared to the long-lasting performance of more expensive options like the Asus Zephyrus G14, another gaming laptop featuring a Ryzen processor. The G5 15 SE came with McAfee LiveSafe installed, which I was suspicious of being the culprit for the quick battery drain. Though, even without it, I averaged the same life span. Dell says that it’s always looking for ways to optimize battery life, and it’s in constant communication with AMD about it. So, it could improve a little in the future, but for now you’ll need to keep the big, rectangular 240W power brick close.

To start using the Dell G5 15 SE, you’ll need to agree to the following:

Final tally: there are six mandatory agreements and 14 optional agreements to use the G5 15 SE.

Performance aside, there’s unfortunately a lot of room for improvement in some key areas of its design. In photos, this laptop looks relatively thin, standing out with a glossy, iridescent shell and its striking, angular fan outtakes — though it’s a tired look in person that’s reminiscent of an older Alienware chassis. Having an all-plastic build at this price point isn’t a shocker, but it creaks when you move the display around, and it generally feels bulky to carry around — not helped by weighing a hefty 5.5 pounds.

Its 15.6-inch 1080p VA display looks crisp and has great viewing angles (Dell refers to it as WVA, or wide vertical alignment), though it’s surrounded by thick bezels. The unit I used for review had some light bleed at the bottom of the display, though it’s most noticeable during loading screens with dark backgrounds. There are side-mounted speakers located near the rear of the keyboard, and shocker, they aren’t great. Sometimes, their location can lead to sound that has a wider presence than what’s usually emitted from laptop speakers, but you’re still better off listening through a headset.

You might immediately plug in your own preferred keyboard and mouse on this machine, but the backlit chiclet keyboard here is serviceable and I don’t make many errors typing on it. If you prefer clicky keys with a good amount of travel, you won’t find that here. The trackpad, while it supports Windows Precision drivers for intuitive scrolling and gestures, is far too small. There’s so much unused space on the wrist rest, so I would love to see Dell actually do something with it.

The G5 15 SE’s ports are comprehensive for the cost. This laptop has a power plug, an SD card reader, a 3.5mm headphone jack, two USB 2.0 Type-A ports, Mini DisplayPort, HDMI 2.0, a USB 3.2 Gen 1 port, Ethernet, and a USB-C port with DisplayPort for supported monitors.

The Dell G5 15 SE is a winner if you’re trying to get the most amount of power for the least amount of money. This isn’t the most lean, well-built laptop out there, and I look forward to seeing how Dell refines its edge in future versions. But as it stands, I recommend opting for this over most other gaming laptops close to $1,000. Its fast components make for a downright enjoyable gaming experience with minimal compromises, and it includes some high-end features like a fast refresh rate display and a speedy RAM and NVMe M.2 SSD combo that keeps it quick on its feet for most tasks. At this price point, Dell is running the show.