Is this modified RX100 a YouTuber’s dream pocket camera?

In 2020, I hope I don’t have to convince you that vlogging is not a frivolous activity, but a real genre of video that can range from hobby to full-time job to full-blown media company. That is why it’s so strange to me that so few cameras are custom-designed for it.

Sony’s ZV-1 is an attempt to fill that gap — and also to fill the gap between what you can achieve with your smartphone and what you can do with a more expensive mirrorless camera. Rather than start from scratch, however, Sony has modified its venerable RX100 into something more specifically designed for taking video of yourself.

The result is an $800 camera that has a lot of very advanced video features and a handful of quirky or frustrating limitations. But it is also small enough to fit in a pocket, and it’s a solid camera for taking regular photos, too.

It makes no sense at all for the people who don’t need it, and it will be a godsend for those who do.

Our review of Sony ZV-1 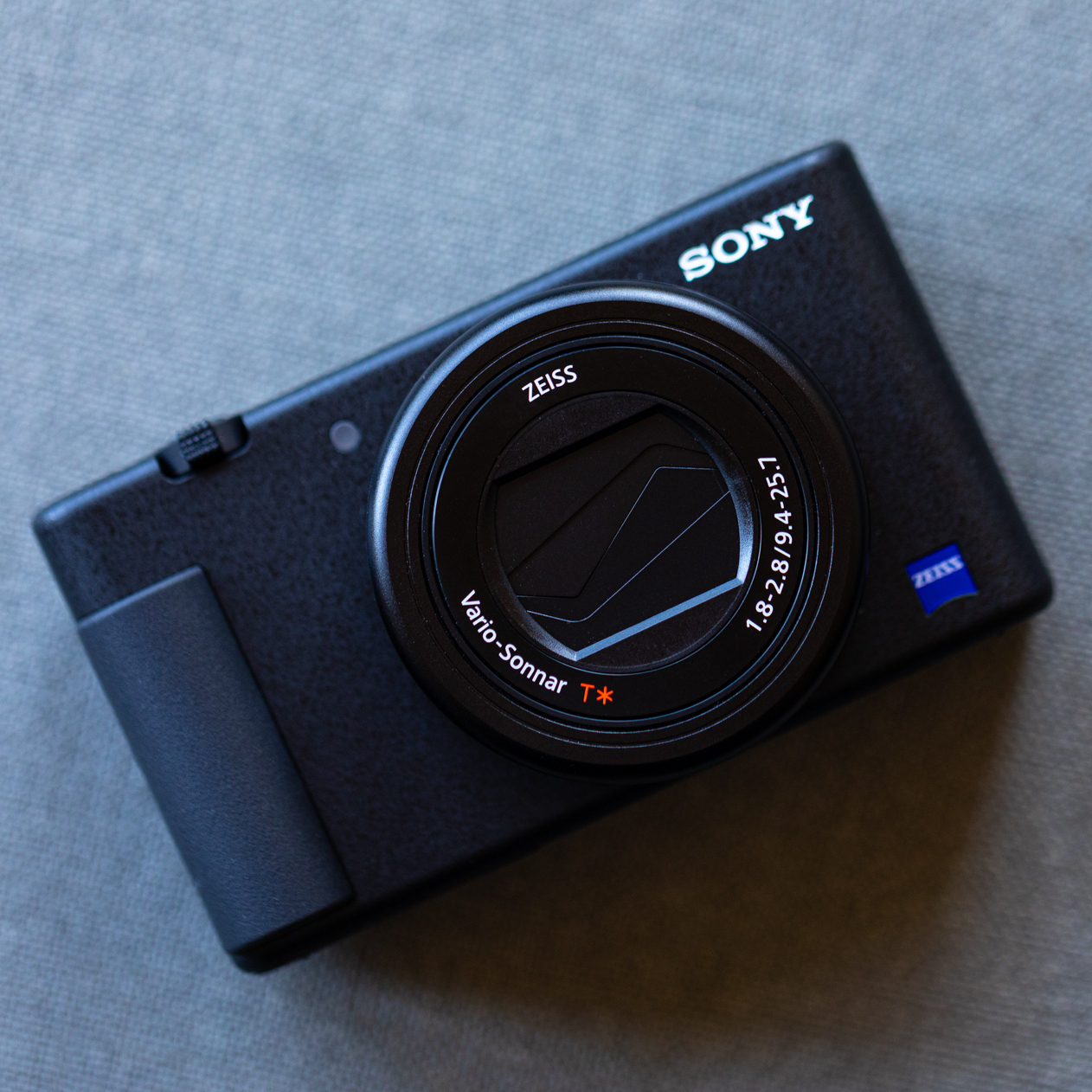 The easiest way to describe the Sony ZV-1 is to compare it to the Sony RX100. Sony essentially stripped away some of the more expensive parts of an RX100 VII, mixed in the lens from an RX100 V, and then added in a few vlogger-specific features.

Unless you’re familiar with Sony’s RX100, that description likely isn’t super useful. So let’s briefly talk about the RX100. For eight years now, it’s been (with apologies to Canon) the canonical example of a camera that crams all of the advanced features of a DSLR into a tiny point-and-shoot body. It may look like the low-rent pocket camera you can pick up anywhere, but, in fact, it can cost well over $1,000 and do things that are normally only available on pro cameras.

I am, if you haven’t guessed, fond of the RX100 and have used one for many years now. What I love about it is that in trading off a smaller sensor and non-interchangeable lenses for pocketability, you don’t also have to give up versatility or features. It can do nearly anything: I’ve shot long 4K videos on it, I’ve tethered it to my Mac and live-blogged Apple keynotes with it.

The full auto modes are competent, but you’re free to mess with ISO, shutter, white balance, aperture, color profiles, focus modes, and more. It’s powerful. But as anybody who’s ever tried to navigate Sony’s obtuse menu system can attest, it’s also complicated. Once you get the hang of it, though, it often fulfills the “DLSR in your pocket” promise.

That brings us to the ZV-1, which takes all of the features and functionality of the RX100 and tweaks the camera’s hardware to optimize it for vlogging. Sony actually grabbed the parts from two different RX100 models: you get the sensor and smarts of the latest RX100 VII but the brighter lens and ND filter (for outdoor shooting) from the RX100 V. You want the VII’s smarts for autofocusing, but you want the V’s lens because it provides better background blur.

Additionally, the screen articulates in a much better way, letting you put it in much more convenient positions. I can’t emphasize enough how important this is: a fully articulated screen is the difference between getting the shot and not, and the ZV-1’s side hinge lets you flip the screen around without it getting blocked by whatever you have in the hot shoe. There are other changes: the record button gets bigger, there’s a nicer handgrip, a “tally light” recording indicator, a new three-mic array, and a hot shoe for accessories. That last one is important: not having to fuss with wires or external rigs just so you can attach a shotgun mic is huge.

Oh, and you also get a free dead cat. (That’s the name of the puff wind filter that goes over a microphone. Don’t look at me; I didn’t make that up.)

Sony is also trying to make the ZV-1 more accessible by bringing the price down. A brand-new RX100 VII costs $1,200, and the ZV-1 is based on that camera. So much of the work on the ZV-1 isn’t about optimizing for vlogging; it’s about cutting costs.

To get down to $800, Sony cut the electronic viewfinder, the magnesium body, the focus ring, the flash, and it also cheaped out on the screen; it blacks out completely if you wear polarized sunglasses. Sony also just didn’t spend money on making an entirely new camera body, which means the ZV-1 still has a lens that isn’t ideal for vlogging and also that it uses Micro USB (ugh) to charge its very tiny battery (double ugh).

But maybe the most annoying part of any Sony camera is the aforementioned menu system. It is deep, confusing, arcane, and mysteriously can’t be navigated with the touchscreen. (The taps are essentially just used for focusing.) In theory, though, a new vlogger doesn’t need to go through all the effort of learning about Sony’s menu system or even necessarily the details of aperture and so on. In full auto mode, the ZV-1 is competent, and Sony has added a couple of preset buttons to make the whole thing just a little more accessible.

One is simply called “Background Defocus,” and it’s designed to change all of the settings to maximize the amount of background blur. It’s a useful, simple tap for people who don’t want to fuss with setting the aperture manually and then compensate for ISO and whatever else. It works, but be aware that because of the ZV-1’s relatively small sensor, you won’t get the kind of bokeh results you’ll see on much larger cameras.

The second is called “Product Showcase,” and more than anything else, it reveals that the ZV-1 is meant for vlogging. The layperson’s explanation is that it ensures the camera will focus on a product you’re presenting to your viewers instead of staying deadlocked on your face. The less technical explanation is that it disables Face Priority in the focus settings, allowing it to grab focus on something that’s closer to the camera than your face.

It sounds like a silly feature, but, in fact, it’s a great example of just how good the focusing capabilities on the ZV-1 actually are. It can lock on to your eye or a pet’s eye, and it rarely suffers from the “focus hunting” you’ll get on other autofocus systems. It also is lightning-quick at changing focus — so much so that you can let the camera change its focus in the middle of a shot, and it won’t be distracting.

The three-mic array sounds much better than your average on-camera microphone (and the dead cat really works), but there’s a mic jack if you prefer that. Unfortunately, there’s no headphone jack for those times when you want to check the sound on your clips when you’re on the go. The onboard speaker doesn’t really cut it.

While Sony has done quite a lot in taking the core RX100 experience and customizing it for vlogging, the decision to start there has consequences. The most important and disappointing one is the field of view. It is 24mm full-frame equivalent at its widest, and that gets a little narrower still when you use stabilization. That’s just not wide enough to get your head comfortably framed in a shot without holding the camera way out at an uncomfortable arm’s length. Some kind of small selfie stick is virtually a necessity. (Sony will sell you a fancy Bluetooth remote one for about $138.)

Another consequence is the battery. It’s incredibly tiny and will run out much earlier than you’ll want it to. Sony rates it at 260 shots or 45 minutes of recording, but both are optimistic in my experience. Luckily, spares are super cheap since the RX100 has been around so long and the ZV-1 uses the same battery.

The ZV-1 is a kind of in-between camera. In full auto mode, the reasons to use it instead of just using your phone for photos and video aren’t necessarily clear. An iPhone is more adept at making aggressive corrections for shake and brightness when necessary. There’s a limit to what a phone can do, though, and that’s where the ZV-1 lives. With its many controls and features, it can pull off video a phone can’t.

But the ZV-1 has a ceiling: you can’t change lenses, and eventually, that may become frustrating. If that happens, though, the ZV-1 makes a solid secondary or B-camera. Were the learning curve on Sony’s menu system just a little less steep, I’d say it’s even ideal as an entry-level camera to teach you some more advanced video terms and skills. (It can be that for you, but it will take some effort.)

Vlogging is a professional job, and lots of those pros are well beyond what the ZV-1 is and can do. Many aren’t, though — and others might just want something that’s pocketable. I hope there are enough people to convince Sony to keep investing in the category. The ZV-1 is an admirable retrofit, but I’d love to see what a ground-up rebuild would look like.