Share All sharing options for: PowerA’s Nano Enhanced is a smaller, mostly great take on the Switch Pro controller

Nintendo’s Switch Pro controller is fantastic, but it’s also kind of big. If you struggle to get a good grip on it or if you simply want a smaller controller to tuck into your bag, PowerA’s new Nano Enhanced wireless controller for the Switch (also compatible with Windows 10) is a good solution. It’s a more compact version that shaves about a third off the size of Nintendo’s official controller. Most of its design and features are faithful, including USB-C charging, motion controls, and LED lights on its bottom to indicate connectivity status. On the downside, it lacks rumble support and NFC for Amiibo.

The Nano is $49.99, which is significantly less than the $69 Switch Pro, and it comes in two colorways: black with gray details around the sticks and triggers or gray with neon blue and red details sprinkled in.

Even though the controller is shrunken, the analog sticks, face buttons, and triggers are large and easy to find. With the exception of the directional pad, each of those elements matches the responsiveness of Nintendo’s own controller. That’s not to say the D-pad isn’t serviceable, but it requires a more concerted effort to press each direction, almost as if the membrane isn’t properly aligned under the plastic. Small children might struggle to easily press it, and I would rule out this model if you primarily play classic games that rely on the D-pad.

Our review of PowerA Nano Enhanced for Switch 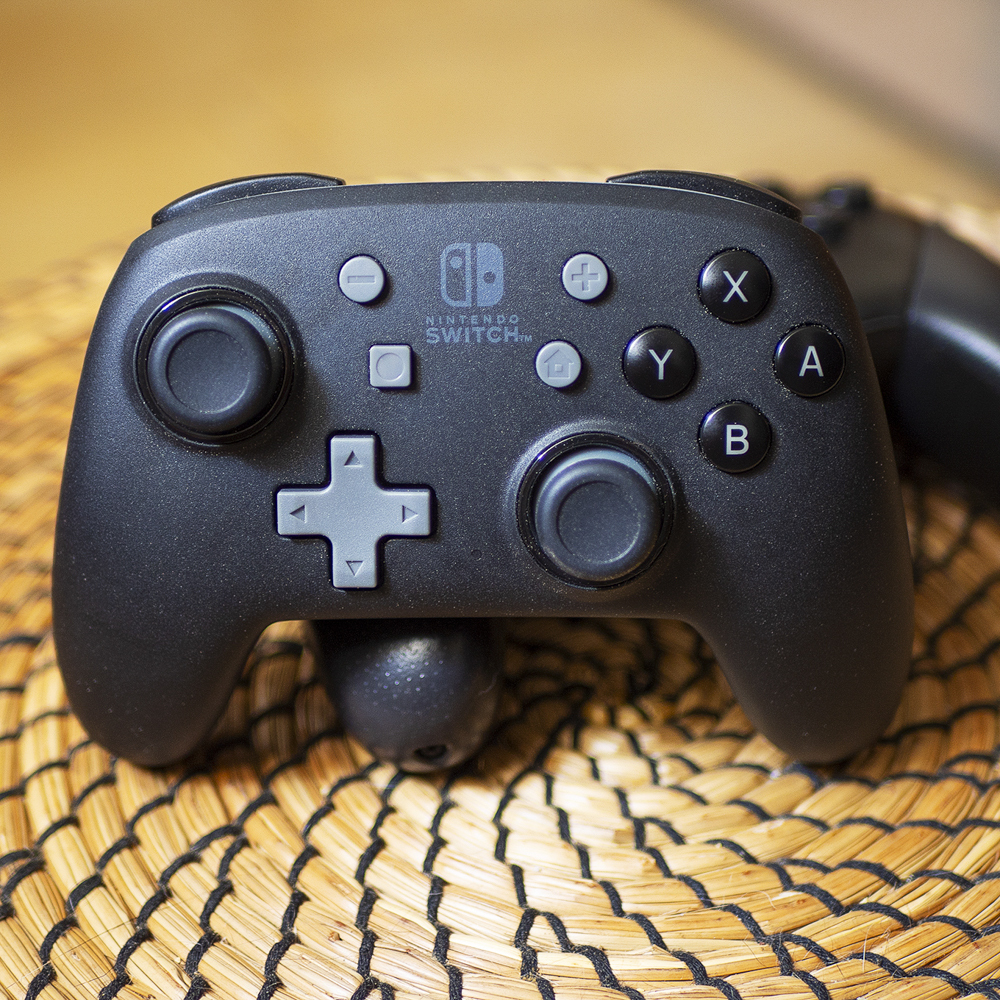 This small controller has two mappable buttons on its rear that you won’t find on the Switch Pro, and they allow you to remap, say, a trigger and a face button to the rear, which might be more convenient for you if you play games that require holding down a button to sprint or something else equally tedious. It’s sort of like having a more limited version of Sony’s Back Button attachment on a Switch controller. This feature doesn’t really do much for me, as I’ve just gotten accustomed to using the standard face buttons, but it adds ease of use and some extra value.

Controls aside, you’ll find a USB-C charging port on the Nano’s top, and PowerA claims that it can last 20 hours between each charge. Many third-party Switch controllers use replaceable batteries, so it’s great that this one’s built in and rechargeable. It also lasts for a few weeks at a time if you only play for a little while each day. There’s an LED near the port that indicates when the battery level is critically low. In the box, PowerA includes a 10-foot USB-C to USB-A cable along with a drawstring pouch for the controller.

In terms of reliability, it’s up there with the Switch Pro, which is to say it’s excellent. I found it just as easy to connect to the Switch, requiring just a press of the pairing button near the USB-C port for it to be connected. (The process for pairing it to a Windows 10 PC with Bluetooth is the same.) It never dropped signal with the console, and PowerA’s 20-hour battery life claim holds up well. The Nano’s build quality is great. It has a rugged, matte-textured feel around the controller’s body that really works for a smaller controller. I have no problem finding a comfortable grip with the standard Switch Pro, though I found myself gravitating toward this one half of the time when I just wanted something a little more low-profile to hold.

The PowerA Nano is a good complement for the Switch Pro. Depending on your hand size, it could easily be your main Switch controller. Though, for me, I’m less enthused to make it my main because it lacks the HD rumble feedback. Still, I can imagine bringing this with me on the go or keeping it handy for either my partner or me to use during a multiplayer game so that neither of us is stuck with the maligned (at least in my home) Joy-Con grip. So long as you can look past the omission of rumble, this shrunken controller is a solid addition to your Switch setup.