But Asus still keeps the crown

For a while, that title belonged to the 2019 Blade Stealth 13. Prior to last year, it was highly unusual to see any GPU more powerful than an MX 150 in a thin and light machine. (The reason rhymes with “schooling.”) That Razer crammed an Nvidia GTX 1650 into a chassis that was just 3.13 pounds and 12 x 8.3 x 0.6 inches was astonishing to see. There was nothing like it on the market.

That’s not true anymore, thanks to the Zephyrus, which not only houses a powerful GPU (up to an RTX 2060 Max-Q) and CPU (up to AMD’s eight-core Ryzen 9 4900HS) in a chassis that weighs just over 3.5 pounds, but it’s also aggressively priced: the tricked-out model is just $1,449. After spending time with that device, it was hard for me to imagine recommending anything else for gaming on the go. Razer’s work was cut out for it. 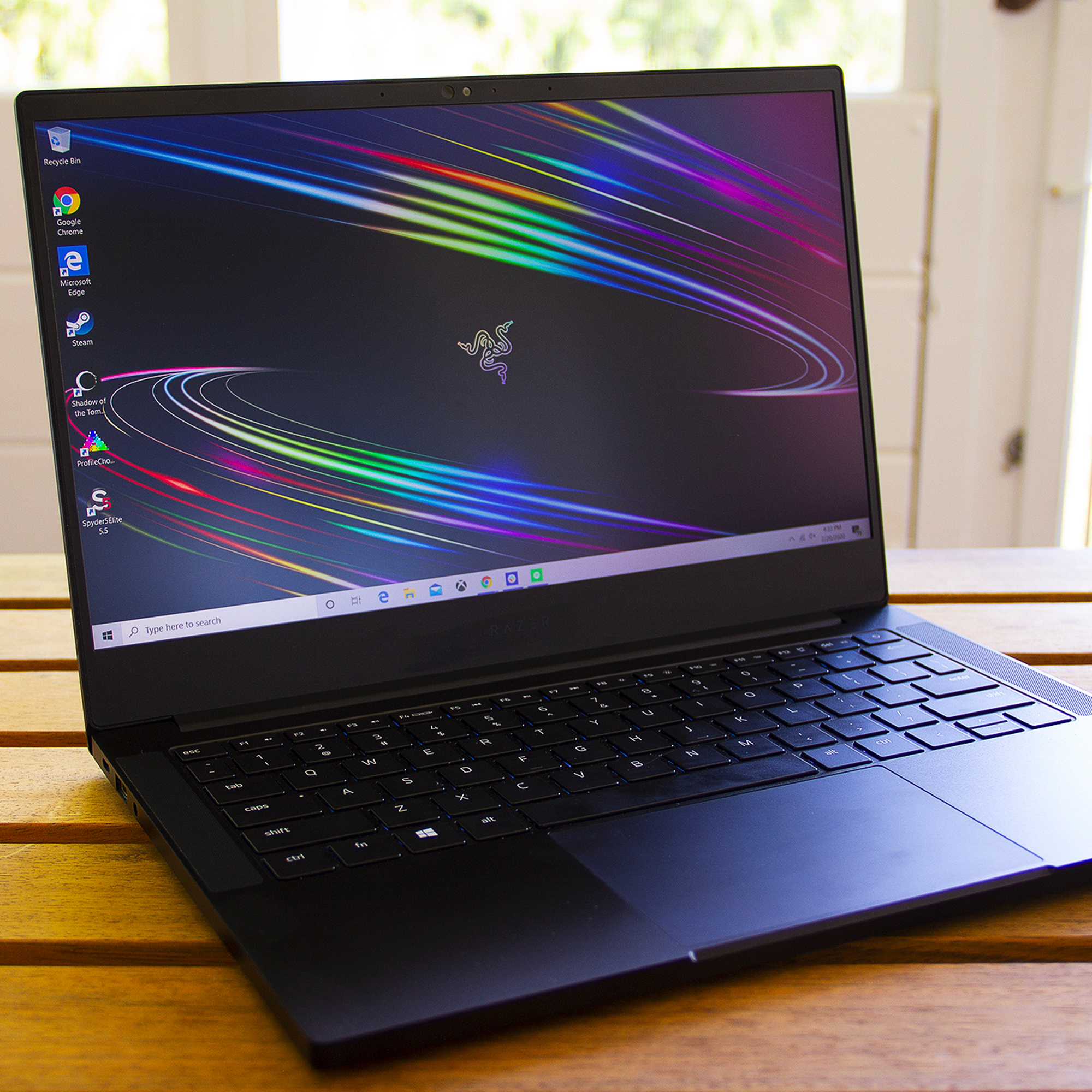 In a vacuum, the $1,799 Blade Stealth 13 is an improvement over last year’s model: the chips are more powerful, there’s a faster screen, and Razer made a much-requested tweak to the keyboard. But thanks to Asus and AMD, this year’s competition is much stiffer. The Blade is no longer the obvious (only, really) choice that it used to be. But there are certainly people for whom the Blade is a better choice than the Zephyrus. Whether you’re one of them depends on what you care about the most.

One obvious area where the Blade has the Zephyrus beat is the webcam — specifically, there is a webcam. (Asus didn’t put one on the Zephyrus.) Some people will care about this and some won’t. But part of the appeal of a laptop with this form factor is that it could easily double as a driver for daily work or for messing around with friends on Zoom. The webcam makes the Blade that much more versatile for non-gaming purposes. Plus, it supports Windows Hello facial recognition, which is handy for quick and easy logins.

The other factor that distinguishes this from the Zephyrus is the design. Don’t get me wrong: the Zephyrus looks fine. But not only is the Blade Stealth 13 one of the best-looking gaming laptops out there; it’s one of the best-looking laptops out there, period. It’s a world away from traditional gaming laptop designs like that of the Dell G5. The chassis is light (3.11 pounds) and compact (11.99 x 8.27 x 0.6 inches), which makes it very close to the size of the 13-inch MacBook Pro (11.97 x 8.36 x 0.61 inches, 3.1 pounds). This Blade looks and feels like a premium ultrabook, and it certainly wouldn’t be out of place in a school or office setting. If I didn’t know anything about laptops, I’d be shocked to hear that it was designed for gaming.

There is one feature that slightly gives up the game (pun intended): the colorful keyboard. In Razer’s Chroma Studio software, you can customize all kinds of effects, colors, and speeds. The keys aren’t individually backlit, so you can’t get up to anything too fancy. But I think the subdued lighting actually augments the Blade’s professional aesthetic. Where garish RGB setups like that of the Gigabyte Aero 15 evoke a disco club, this keyboard has the vibe of a classy bar.

Razer has made a few significant upgrades to last year’s Blade Stealth 13 model. The first feature to know about is the display. You can now configure the Blade with a 120Hz panel, which is the highest refresh rate 13-inch screen you can get. (There’s also a 4K touchscreen option. Obviously, you won’t want that one for the best gaming results.) I measured brightness at up to 357 nits, covering 99 percent of the sRGB spectrum and 74 percent of Adobe RGB. The screen delivers a nice picture, with bright colors and sharp details. Response times were decent, but I did see more ghosting than I’d want to see on a high-end gaming laptop.

As it did on other Blade models, Razer has also made a welcome change to the Stealth’s keyboard. Previous generations of Blade and Blade Stealth attempted to squeeze an up arrow right between the right Shift key and the question mark key. This made it very easy to accidentally hit the up arrow when you meant to hit Shift. No longer: Razer has extended the Shift key and wedged half-height arrow keys underneath. As someone who uses the Shift key more than I use the up arrow, I much prefer it this way. The trackpad is also quite good and extremely smooth, clicking with a nice quiet thunk.

The other peripheral that’s worth mentioning is the speakers. Like last year’s Blade, this laptop has upward-facing speakers on each side of the keyboard. The audio they deliver is impressive for a laptop of this size, though it lacks strong bass (as laptop audio tends to). I felt comfortable using the Blade to blast music through my bedroom and living room without any sort of external speaker. It sounds better than the G14, and is fairly on par with the 13-inch MacBook Pro, though the Pro does a better job with bass.

I tested the Blade model that has an Nvidia’s GTX 1650 Ti with Max Q design, in addition to a quad-core Intel Core i7-1065G7 processor, 16GB of RAM, and a 512GB SSD. The GTX 1650 Ti is a slight step up from the last Blade Stealth, which had a GTX 1650. But we wouldn’t expect it to deliver nearly the same power as the RTX 2060 that can come in the Zephyrus G14. That bore out in our testing. The Stealth ran Shadow of the Tomb Raider on its highest settings at an average of 45fps. That’s playable enough, and you’ll certainly hit 60 if you’re willing to lower the settings. However, it’s a significantly worse frame rate than we got from the G14, which ran the same benchmark on the same settings at 74fps.

To start using the Razer Blade Stealth 13, you’ll need to agree to the following:

In total, that’s four mandatory agreements and 15 optional agreements to use the Blade Stealth 13.

The battery life is good as gaming laptops go

The Blade also did a fine job on our Premiere Pro test, which involves exporting a 5-minute 4K video. This unit completed the task in 5 minutes and 50 seconds. That’s a much better result than we got from the MacBook Pro 13 (which lacks a discrete graphics card) as well as the 13-inch Surface Book 3 with a GTX 1650 Max Q.

Of course, on a laptop with this screen and size, most people are likely spending more time on daily productivity work than on heavy media editing. For regular office tasks, the Blade does just fine. I used it to jump between 12 to 16 Chrome tabs, Slack, Spotify, and Zoom, as well as miscellaneous tasks like downloading files, copying folders, and batch processing photos. Everything was smooth, and I didn’t notice any performance difference between the Blade and bulkier rigs like the G14.

The Blade’s fans were often spinning, but they only got annoyingly loud under heavy loads of Chrome tabs or other demanding programs (like games). The bottom of the chassis was usually warm on the lap, but never hot enough that I had to move it.

Battery life was good, but the profile you choose has a significant impact on results. On the Windows Better Battery and Battery Saver profiles as well as Razer’s Battery Saver profile, I got (on average, from a number of runs) just over seven hours of use. Our battery test includes running the laptop through our typical workday (mine is detailed above) at 200 nits of brightness. On the Windows Better Performance profile and Razer’s Balanced setting, I only tended to get around five and a half hours. I didn’t see a huge performance difference between any of the battery presets (and you’ll want to plug in when gaming anyway), so I’d just use it on Battery Saver if you need a day of juice.

That battery life is pretty good as gaming laptops go. Seven hours is comparable to what I got running the XPS 13 through the same workload and better than what we got for the MacBook Pro 13. They don’t quite put the Blade at the top of its class, though; the Zephyrus lasted 8 hours and 50 minutes on the same test. I’m a bit disappointed that this Blade didn’t outlast the Zephyrus, given the latter’s more powerful chips, but it’s a solid result nonetheless.

Razer’s 2020 Blade Stealth 13 is a competent and beautiful computer. Almost everything about it is good. The problem is that when it comes to its main attraction — gaming — there’s an exceptional 14-inch rig out there that just shellacks it. Not only that, but it’s a few hundred dollars cheaper. From the Zephyrus to the Dell G5 and the Envy x360, recent AMD systems have run circles around Intel systems in the price-to-performance game. That’s why I can’t, in good conscience, recommend the Blade as the best portable gaming laptop for most people. Asus and AMD have that crown for now.

That said, there are reasons why someone might want Razer’s laptop instead. One is the built-in webcam. Another is the refined aesthetic, which is a hallmark of the Blade Stealth, including the chic colorful keyboard. And another is the form factor. At the end of the day, the Blade Stealth 13 is still the most portable gaming experience you can find. The G14 is a bit bigger and noticeably heavier. If you’d prefer to sacrifice some gaming performance in exchange for a laptop that’s exceptional in these areas, the Blade Stealth 13 is for you.