The Motorola Edge is a more accessible flagship phone

Share All sharing options for: The Motorola Edge is a more accessible flagship phone

I’ve already talked plenty about the hardware on the Edge Plus in my review of that device earlier this year, so I’ll largely refer you there, seeing as the Edge’s design is identical in all but the color it comes in (a shimmering rainbow-finished black that aggressively picks up fingerprints) and the number of cameras on the back. In short, though, it’s a well-made slab of aluminum and glass that’s fairly unremarkable, and the “Endless Edge display,” which curves around the sides of the device, is more eye-catching than actually useful.

Our review of Motorola Edge 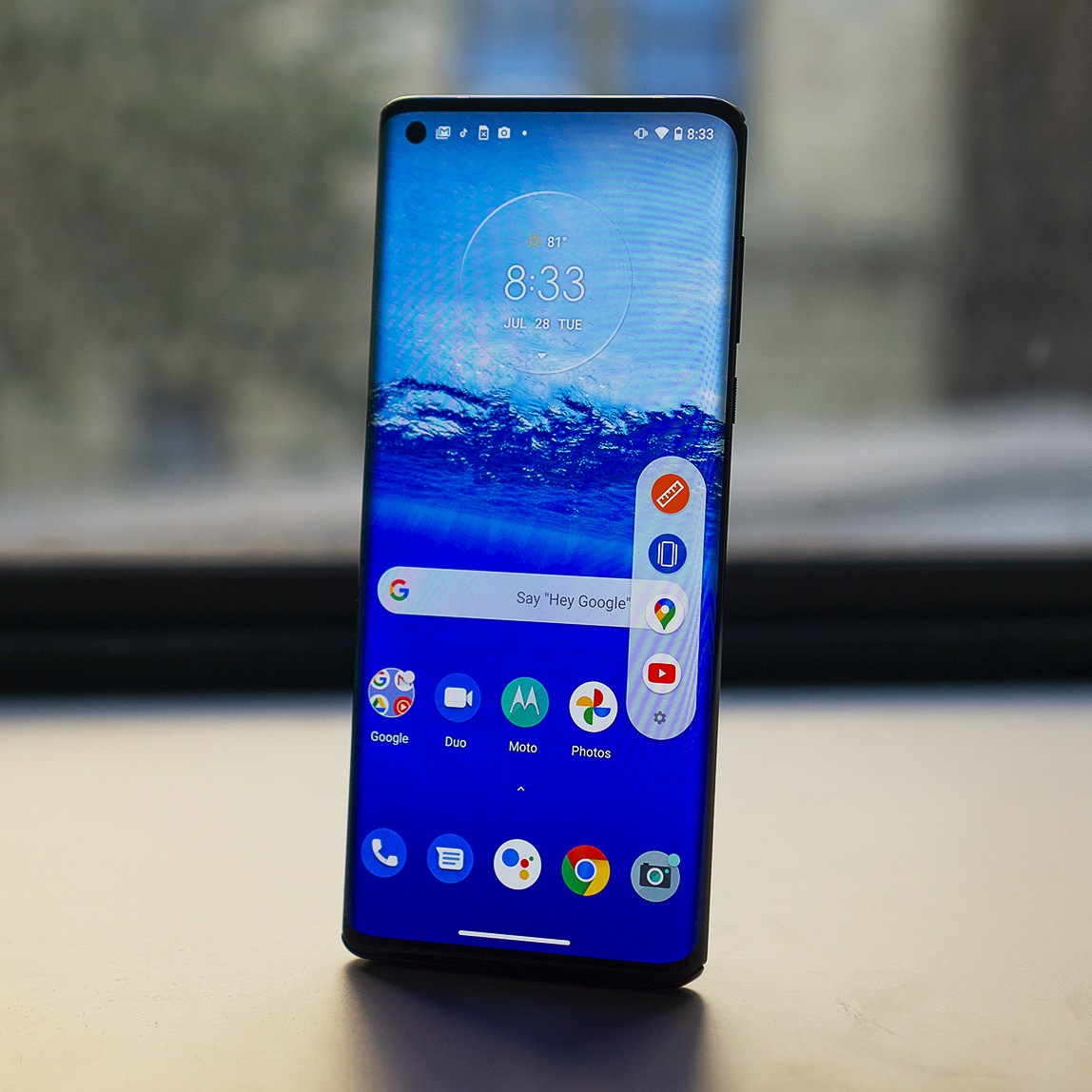 There are six areas where hardware on the Edge differs from the Edge Plus, though, all of which leave the Edge a little worse off compared to its pricier sibling:

Which leaves the only real question about the Edge: are those sacrifices worth the drastically reduced price?

Motorola’s Edge Plus is a contender, not a champion

The Snapdragon 765 in the Edge is Qualcomm’s second-best processor, and in general, day-to-day use wasn’t noticeably worse than using a flagship chip. Apps launch quickly, websites load fast, and navigating around the UI is snappy. More demanding games, like Fortnite or Asphalt 9, run well, too.

I did run into the occasional bit of stuttering and lag — particularly when launching the camera app or switching back to a previously open game — which may be due to the 6GB of RAM. It is definitely the lowest I’d want to go for a high-end Android phone in 2020, but even those minor hiccups weren’t really enough to be a concern.

Similarly, the reduced battery size doesn’t impact the experience. I was easily able to make it to the promised two days, although admittedly my phone usage is a little different than normal thanks to working from home. (The Snapdragon 765 — which has an integrated modem and is more power efficient, is presumably a contributing factor toward making up the difference in battery size.)

The 64-megapixel main sensor that replaces the 108-megapixel camera on the Edge Plus holds up well. Like its pricier sibling, the Motorola Edge uses quad-pixel binning to produce lower-resolution images with better color and less image noise. (So the Edge shoots 16-megapixel shots by default.) It can shoot at the full 64 megapixels, although, like the Edge Plus, those photos generally came out worse. And while you will lose the finer level of detail that the higher-resolution camera offers, I was still pleasantly surprised by the Edge’s camera. It won’t hold up to the level of Apple or Google’s industry-leading hardware and software, but it doesn’t drag the device down (a problem that Motorola has had in the past).

The telephoto camera is also worse on the Edge. It only has 2x optical zoom instead of 3x, and it lacks optical image stabilization. Given that the telephoto lens was already the worst part of the Edge Plus, this isn’t too much of a loss. The other two cameras are unchanged from the Edge Plus: the 16-megapixel ultrawide-angle / macro camera (which takes pleasantly fun shots in both wide-angle and macro modes) and the front-facing camera (which is… fine, except for the extremely rough portrait mode).

5G isn’t as good as on the Edge Plus

The final two changes are the most drastic, as they’re straight up missing features that the Edge doesn’t have (rather than reduced versions of ones it does). The lack of wireless charging is a frustrating one for any device in 2020 (as is the lack of any real waterproofing, something that it shares with the Edge Plus). And the sub-6GHz 5G is definitely slower, especially compared to Verizon. In my tests on T-Mobile’s 700MHz network, I saw speeds of around 70Mbps down and 35Mbps up — not bad, but nothing close to the 250-300Mbps Verizon’s mmWave offers. The flip side, of course, is that you can actually use the Edge on T-Mobile (or AT&T) since it’s not locked as a Verizon exclusive in the US.

To actually use the Motorola Edge, you must agree to:

Additionally, for Google Assistant, there’s an option to agree to use Voice Match: “Allows your Assistant to identify you and tell you apart from others. The Assistant takes clips of your voice, which is only stored on your device(s).”

There are two other differences, which are less directly about hardware: the Edge costs $699 at retail, $300 less than the $999 price tag on the Edge Plus. And Motorola is offering a “limited-time” $499 promotional price on the Edge, making it half as expensive as the Edge Plus. The Edge is also usable for far more people since it’s being sold unlocked, instead of limited to just Verizon customers in the US.

In many ways, it’s the flagship that Motorola probably should have made from the start — one that offers an almost premium experience at a lower price than its competitors, in an unlocked form that works on any network, rather than trying to meet them at the current $1,000 marketplace.

Motorola makes a lot of phones at a lot of different prices, to the point where the lineups start to blur together. As a $700 phone, the Edge is certainly a better deal than its full-priced sibling, offering nearly comparable features and performance at a significantly reduced price. The current $499 price makes it an even better deal — one that starts to demand to be taken seriously as one of the better midrange phones around.