Aside from a few design issues, this is a buttoned-up gaming laptop

Share All sharing options for: MSI’s GS66 Stealth almost has what it takes to beat Razer

For years, Razer has set the standard for making gaming laptops that are compact, slim, and feel great to use. MSI wants to end that streak, and its new GS66 Stealth is actually a viable alternative, at least in terms of performance. It still has a little work to do on nailing the small design details.

The GS66 Stealth doesn’t quite nail the fit and finish to take on the best, but landing short of that still gets you a polished laptop that’s stuffed with powerful components and other features that typically come with a $2,349 gaming laptop (as configured; this model starts at $1,499 and goes up to $2,999). It has a Thunderbolt 3 port for fast data transfer, and its display has a 300Hz refresh rate that takes full advantage of the Nvidia RTX 2070 Super Max-Q graphics to show off your games in fast, fluid fidelity.

It is a thin, sleek machine from every angle, whether it’s closed or opened up. It has one of the most generously sized trackpads I’ve ever used on a Windows laptop, similar to the one on MSI’s creator-focused Prestige 14. Compared to the GS65 Stealth Thin, this one ditches the copper detailing and has a simpler, more confident look in general. MSI isn’t fooling anyone with the results. It’s all-black design with slim bezels around the display is similar to Razer’s styling, but the similarities end once we get to MSI’s clumsy keyboard layout that makes executing functions difficult and the bottom of its aluminum chassis that flexes with just a little pressure.

Our review of MSI GS66 Stealth 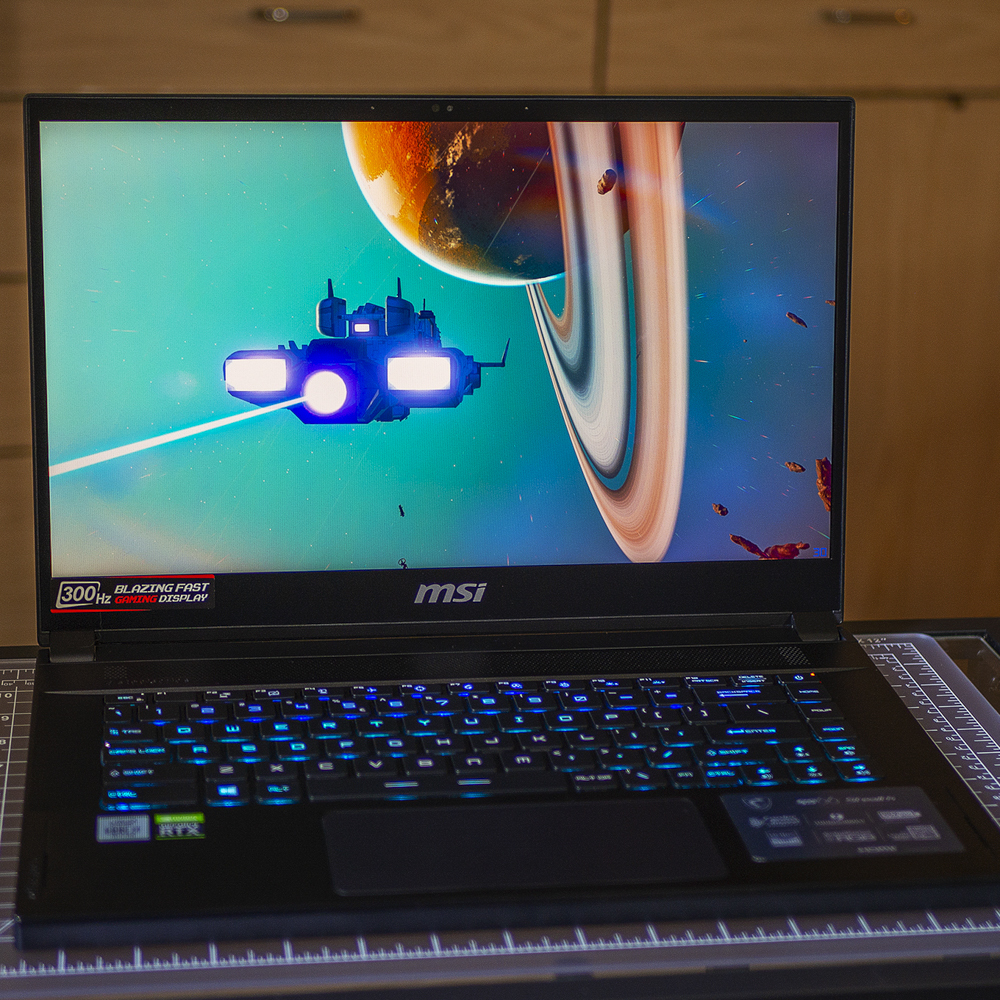 One of the more disappointing things about the GS66 Stealth is that, after using it for a week, going back to my DIY-built desktop made me realize that it’s due for some upgrades. This laptop churned through No Man’s Sky, maintaining over 120 frames per second on its highest graphical settings. This isn’t the most demanding title ever made, but it’s constantly straining the CPU, GPU, and storage as it quickly loads in assets when the player goes from planet to planet or when hopping between galaxies. It’s common to see some huge dips in performance with this game, but it was a glorious experience here.

The RTX 2070 Super Max-Q, Intel’s Core i7-10875H, and the 32GB of RAM proves to be a potent combination of specs for ripping through games, which is what you want when you buy a $2,349 laptop. Additionally, its power makes good use of the 300Hz refresh rate TFT LCD panel. You won’t see upward of 300 frames per second performance in most modern games, but the support for it is there. You can expect most games to run well above 60 frames per second at their highest settings — often times well above 100 frames per second, and sometimes 200 frames per second if I was playing a less demanding game, like Tetris Effect or Rocket League. Viewing angles take a hit, so watching content from off to the side won’t look as good as viewing it head-on, but the colors pop and playing games at a fast frame rate is always enjoyable.

What’s great about this configuration is that it requires few, if any, compromises to visuals at the display’s native 1080p resolution. I ran through a range of other demanding titles, including Control and Red Dead Redemption 2. Control supports ray tracing, and it was able to run the game with high graphical settings and high ray tracing at around 45 frames per second. With Nvidia DLSS ticked on — which uses AI and reduces the render resolution of this game to achieve a faster frame rate with ray tracing features enabled — I saw an average of 75 frames per second, which is pretty great. Red Dead Redemption 2 is another taxing game, and this laptop could keep a smooth 55 frames per second at its ultra graphical settings (excluding the locked sliders that can really affect performance in most systems).

Heat, and the noise that laptops make to address it, is usually a common issue with gaming laptops, but the GS66 Stealth handles the stress gracefully. It manages to stay quiet relative to other machines that definitely sound like they’re about to fly away, and its three fan outtakes along the rear and right side of the chassis really move a lot of air to keep cool when the system is being properly taxed. The grille near the display hinge becomes too hot to comfortably rest a hand on while gaming, but the machine generally keeps the heat away from the rest of the laptop.

This configuration handles the applications I rely on for work and during after hours with ease, and it’s all super smooth throughout the experience. Concurrently running 15 Microsoft Edge tabs, Spotify, Slack, and Affinity Photo isn’t a challenge, and 32GB of RAM is great to have if you want to be able to run a game without exiting out of applications. Battery life is usually a laughing matter with gaming laptops, but I’m impressed with the roughly five-hour screentime the GS66 Stealth managed with all of my usual apps open and the display slightly dimmed. It does have a 99Wh battery, which is the legal limit in terms of capacity, and it’s impressive that it fit into such a slim chassis.

If your workload is centered around video production in Adobe Premiere Pro, the GS66 Stealth is capable enough to quickly handle some heavy work. It exported a five-minute, 33-second 4K video in three minutes, 14 seconds — far faster than it takes to watch the video. This is a gaming laptop, but based on the sheer number of preinstalled applications focused on content creation, MSI wants to let you use its power however you want. It comes with AudioDirector, ColorDirector, Music Maker Jam, PhotoDirector 10, and PowerDirector 17 out of the box. The power is versatile, so long as your workflow doesn’t require an SD card slot because it doesn’t have one.

To start using the MSI GS66 Stealth, you’ll need to agree to the following:

In total, that’s six mandatory agreements and 15 optional agreements to use the GS66 Stealth.

Despite its power, its keyboard was the source of a few productivity issues for me. The keys themselves have a generous amount of travel and are satisfying to type on, but MSI’s keyboard layout suffers from a bundled arrangement near the arrow keys that turns executing simple functions, like turning up the display’s brightness or the volume, into an error-prone task. The Fn key that needs to be held down is half the width of the rest of the keys, and it’s wedged between the backslash and control buttons. I’d be just as happy to have the arrow keys fall out of line to give more space for dedicated media and function keys — or just do what Razer recently did and make the arrow keys smaller instead. Also, MSI built the wrist rest to be about level with the height of the keys, which seems like an innocuous choice, but its lip is right next to the space bar, which further heightens the learning curve with this keyboard since it feels like a key. You might get along okay with it, but the lip tripped me up.

Last thing with the keyboard: this keyboard’s RGB backlighting is still managed through the SteelSeries Engine 3 app, but upon loading it up, it said it couldn’t find a connected device. It wasn’t until I redownloaded the app from MSI’s support page that I got the backlighting to work as intended.

The GS66 Stealth that we tested is a fast gaming laptop, and it’s priced competitively to Razer’s Blade 15 — even undercutting its most similar configuration when it comes to packing in a faster refresh rate display, a larger battery, and more RAM. It’s not a bad deal on the lower-end configurations either, keeping appealing features like a Thunderbolt 3 port and a 144Hz refresh rate display in its most affordable $1,499 model. Despite a few nagging design issues, the foundation is more sound and powerful than ever. MSI’s design is the clear winner compared to the plentiful amount of all-plastic gaming laptops in each configuration’s price range. For now, Razer is still the standard to beat, but MSI is getting awfully close.

Super Punch-Out!! has a hidden two-player mode — and you can try it on the Switch

Street Fighter 6 is bringing the ‘80s (and feet) back