Acer’s Swift 3 is a solid laptop for students

A portable device with some compromises

Share All sharing options for: Acer’s Swift 3 is a solid laptop for students

I recently surveyed a bunch of students about the most important aspects of a high school or college laptop. They were almost entirely in agreement on their top priorities: battery life and portability.

That’s really who the Acer Swift 3 is targeting. It checks all of the “ultrabook” boxes, but it’s a solid “B” student within that category. It’s a little bit worse in most areas than players like the Dell XPS 13 or Acer’s higher-end Swift 5 and Swift 7, and there’s nothing particularly flashy or exciting.

That’s a feature, though, not a bug. Because at $649 list price (it’s about $673 on Amazon at time of press), the question isn’t “Does this laptop knock your socks off?” The question is “Does it get the job done, and where are you asked to compromise?”

The compromises exist — I’ll get into them later — but the gist is that, for Google Docs work, Zoom calls, streaming, emailing, and other tasks that many students spend the day doing, the Swift 3 does the trick. And it offers the combination of portability and durability that’s perfect for a campus experience or other on-the-go lifestyles. 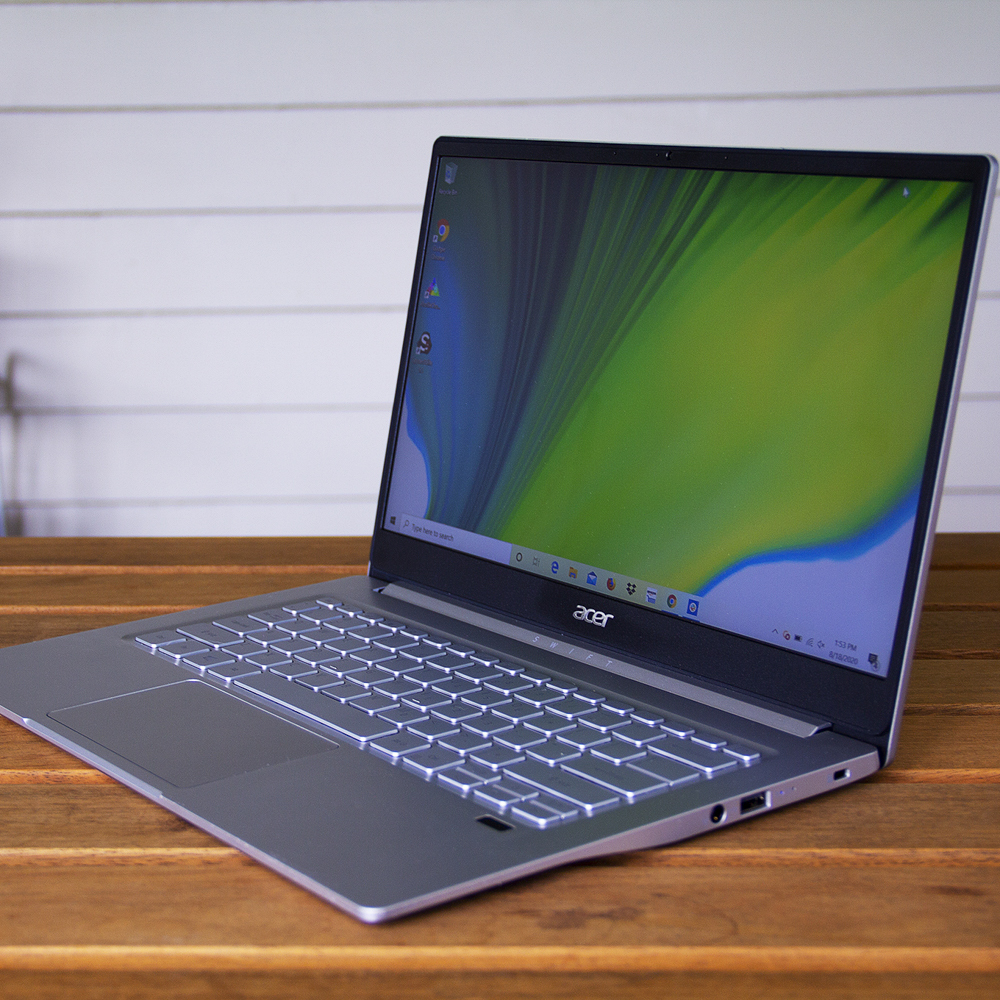 On the portability first. The Swift 3 is 2.65 pounds (1.2kg) and 0.63 inches thick. That means it’s not the lightest 14-incher out there. The Swift 5 is 2.18 pounds (0.99kg) and 0.59 inches, and a few other laptops past the $1,000 price point are close to the two-pound mark. This Swift isn’t light enough that picking it up messes with your mind. But it’s still quite portable and significantly thinner than many budget options like Acer’s Aspire 5. You shouldn’t have any trouble carrying it around or squeezing it into a full backpack.

This also isn’t one of those midrange machines like HP’s Envy x360 that looks and feels more premium than it is. Sit the Swift 3 next to the Swift 5, and you’ll probably guess which one is more expensive. I’d call the former’s aesthetic minimalist. The chassis is a silvery gray, and there are shiny Acer logos on the lid and (thick-ish, but not terrible) bottom bezel. There is one thing I particularly like: “Swift” is printed in a stylish font across the center hinge, lending an aura of sophistication to what might otherwise be a clunky-looking feature.

Students will appreciate that it all feels pretty durable, especially for an ultraportable. The top and bottom covers are aluminum, and the palm rests are magnesium-aluminum. There’s some flex in the screen and keyboard, but not enough to make me worry about battering it around in my backpack. There are also sturdy pads on the bottom to prevent slipping.

Note, though: There’s no touchscreen, and the display doesn’t flip around to tent or tablet shape (though it can lay flat if need be). If you’re starting high school or college this year, it’s worth considering whether you’d prefer a device with which you can take notes or draw diagrams.

On the sides, you’ll find a pretty good selection of ports. There’s a power plug, an HDMI, a USB-A, and a USB-C on the left; on the right, there’s a headphone jack, another USB-A, and a Kensington lock slot. If you’re not a fan of Acer’s brick, you can charge with the USB-C port as well. One thing that might be nice to have is an SD slot, but I’ll forgive that omission because this device is clearly not meant for creative work.

That brings me to the display, which is the biggest compromise you’ll be making if you choose the Swift 3. In testing, the 1920 x 1080 panel reproduced an underwhelming 65 percent of the sRGB spectrum and only hit 218 nits of brightness. For work and entertainment needs, that result is okay, though it rules the Swift out for anyone who needs to do artistic work or wants their videos to look as gorgeous as they can. (Those people should be looking at higher-end options like the Swift 5.)

It does create problems with outdoor use, though. I did some work on my porch, and even on a fairly dreary afternoon, with the screen at maximum, glare hindered my experience. I constantly found myself wishing I could crank things up more. Some comparable laptops do better: the Aspire 5 gets slightly brighter with similar sRGB results, while Lenovo’s IdeaPad 5 achieves over 300 nits (though color reproduction is slightly worse).

The other hindrance is the 16:9 aspect ratio, which makes multitasking a pain. As someone who usually stacks multiple windows side by side, I almost always needed to zoom out to see everything I needed to at once. There are a few Swift 3 models with 3:2 displays that are a bit more expensive but worth considering if you think you’d benefit from extra screen space.

There are things to like about the panel, though. The bezels are fairly unobtrusive, measuring 5.5 millimeters on the sides, giving the whole thing a modern and professional look. Acer claims an 82.73 percent screen-to-body ratio. And the finish is matte, which mitigates the effects of glare in bright settings at the expense of some contrast.

The keyboard is on the shallow side, and I didn’t hit my usual typing speeds, but there’s a nice click to it (and it’s even backlit). The touchpad is also fine and supports precision gestures, but it requires a bit of a firm press. The webcam is grainy, but it produces a serviceable picture. There’s no facial recognition, which isn’t a crime at this price point. One handy feature is the integrated fingerprint reader, which is below the keyboard. It’s both fast (it takes less than a second to authenticate) and quite reliable.

In other words, the Swift 3 is fine (but not great) in almost every category. But if there’s one area where the device is punching above its weight class, it’s performance. That’s no surprise since AMD’s Ryzen 4000 series has spent much of this year redefining the results we should expect from budget and midrange products.

My system was perfectly fine at handling my daily office workload of eight to 12 Chrome tabs with Slack, Spotify, and occasional Zoom call over top. Video streaming and basic photo editing was also no problem. Nothing slowed down, the chassis never heated up, and I never even heard the fans. It really felt like using a Surface Laptop or other higher-end Windows options. (Of course, you wouldn’t want to use the Swift 3 for gaming beyond basic titles, or other tasks that might leverage a GPU.) Battery life was also fine. I got between six and a half and seven hours driving the Swift 3 through my workday, on the Better Battery profile with the screen around 200 nits of brightness.

This configuration should be fine for any similar load of school or office work. But I don’t think you even need these specs to get a great experience. We’ve seen fantastic results from the six-core Ryzen 5 4500U, which performs comparably to a Core i7. I think anyone eyeing the Swift 3 can go with one of those models (they’re currently going for as low as $619) and save a chunk of change.

My one complaint is that the speakers aren’t great. Audio is thin, even compared to other laptop speakers, with bass and percussion very muted. Another thing to note is that the Swift does come with some bloatware. I got some annoying Norton popups and ad notifications from Acer’s Jumpstart program, and there’s some random stuff like Dropbox and ExpressVPN preinstalled. It’s another thing that’s not the end of the world at this price point, but if you want to free up space or just reduce the clutter, you’ll have to take some time to remove these things.

The Acer Swift 3 presents you with multiple things to agree to or decline upon setup.

In total, that’s four mandatory agreements and 17 optional ones.

The Acer Swift 3 comes with compromises. Some of those are a given with a $649 Windows laptop — you’re obviously not getting a dedicated GPU or an exceptional screen — but others are worth thinking about. It’s not a convertible device, there’s no touchscreen, and the design won’t turn any heads. As caveats go, these are far from deal-breakers, but they are important to some customers — and students, in particular. If you’re looking for a sleeker 2-in-1, you may find HP’s Envy x360 or Lenovo’s IdeaPad Flex 5 to be a better fit, albeit at higher costs.

But overall, the Swift 3’s sturdy build, decent battery, and compact form render it a solid choice for its target demographic: students and anyone else looking for a portable device that won’t break the bank. It’s not the best laptop on the market in any of those categories — but it’s one of the best at its price point in all of them.