A gaming laptop that doesn’t cut too many corners

The Razer Blade Pro 17 is far from an Ultrabook. It’s just over six pounds and boasts a 17-inch screen, an H-series processor, and a top-end RTX GPU.

But it’s got an Ultrabook-y vibe to it. Like its smaller counterparts in the Blade line, the Pro 17 is chic and professional, lacking the bells and whistles you might expect to see on a large gaming laptop. The chassis is all black and all aluminum, with Razer’s logo adding a sleek splash of green to the lid. The keyboard, while colorful, is classy and subdued. 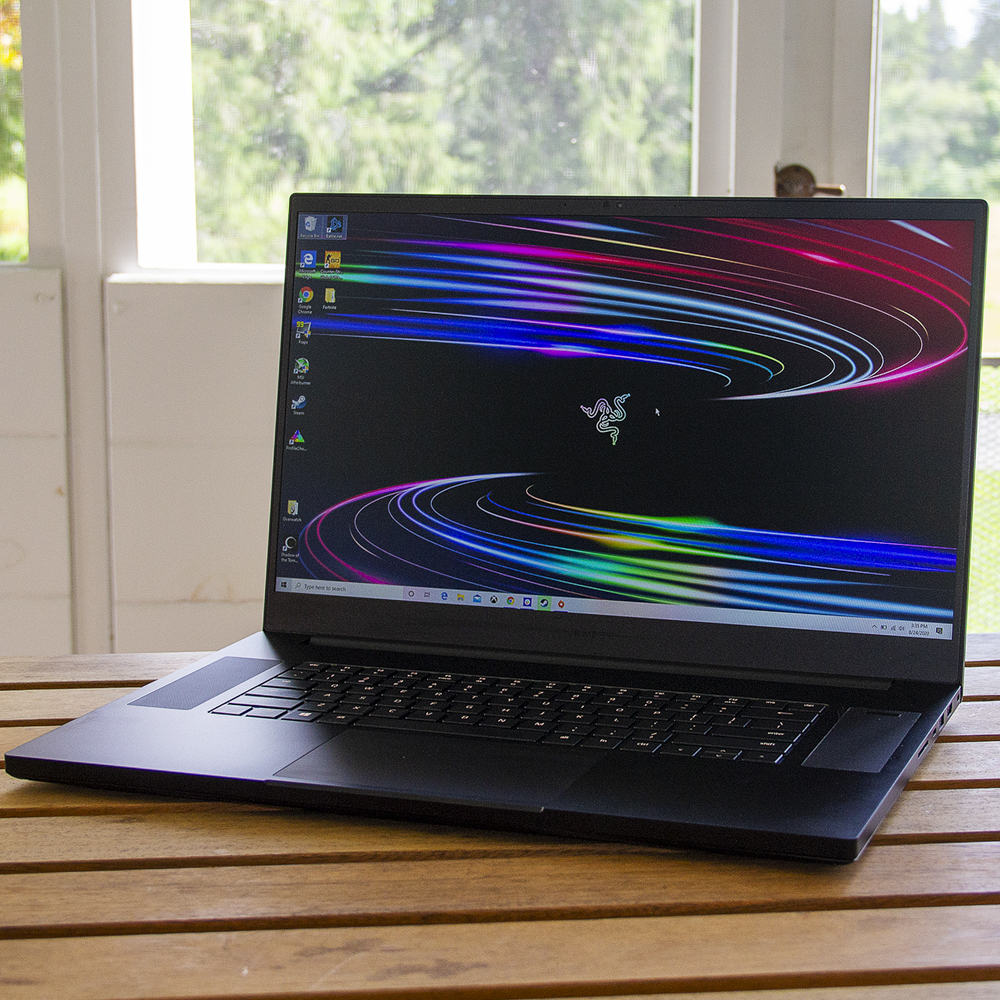 But the insides are where the Pro 17 really stands out from its siblings. This thing has serious power, packed with an eight-core Intel Core i7-10875H and Nvidia’s GeForce RTX 2080 Super Max-Q. Those don’t come cheap — configurations start at $2,599. And they don’t deliver the absolute best gaming results on the market — those are still going to come from even larger systems with better cooling. But it’s still the best choice for gamers looking for a portable, professional machine.

A couple things to note, though, if you’re in that demographic. First, while the Blade looks more like a premium workstation than a stereotypical gaming laptop, it still has gaming-laptop battery life. (I got about two and a half hours of productivity work out of the device, and 53 minutes of gaming. Even among gaming laptops, that’s… well, not great.) Second, it’s not terribly thick for a gaming rig (0.78 inches thick), but at 6.06 pounds, it’s still not trivial to carry around (and the charger is hefty as well). In short: the Pro 17 is portable enough to easily transport between rooms of your house, but — as is often the case with desktop replacements — it’s not the right choice if you’re looking to play on your commute.

In terms of inputs, the Pro 17 has a backlit keyboard with per-key RGB lighting. The keys are a bit shallow but deliver a reasonable click. Razer has finally extended the shift key and moved all four arrow keys underneath it; previous Blade models squeezed the up arrow to the left of shift, making it easy to accidentally nick the wrong one. The Pro 17 doesn’t have a numpad, as many 17-inch (and even a few 15-inch) laptops do. That gives the keyboard more space, but it also means you may need to remap controls on some games (as I did in Microsoft Flight Simulator).

In Razer’s Synapse software, you can also enable a nifty Gaming Mode, which puts out color profiles customized to the title you’re playing. For example, W, A, S, and D all turned a bright yellow while I ran Overwatch.

The Blade’s touchpad certainly isn’t its most important feature, since many people will probably be using a mouse. But if you’re curious, it’s also fine and quite roomy.

The laptop’s wide port selection means you can potentially connect up to three external displays. There are three USB 3.2 Gen 2 Type-A ports, one USB 3.2 Gen 2 Type-C, one Thunderbolt 3, one Ethernet, one power port, one HDMI, and one UHS-III SD card slot, in addition to a Kensington lock. You can charge the Blade by USB-C, but Razer recommends that you stick with its brick, since the laptop may charge slowly or not charge at all if you’re using it with a low-wattage adapter.

The standout feature here, though, is the display. The Pro 17 can come with one of two screens: a 300Hz screen with 1920 x 1080 resolution or a 120Hz touch display with 3840 x 2160 resolution. I tested the 300Hz configuration. The high refresh rate and lower resolution means that this panel is really meant for gaming — if you’re looking to do serious creative work, the latter screen is a better option. (The 1080p display is also not the brightest one around, reaching a peak of just 319 nits in my testing.) Still, games looked pretty good — I saw little glare and almost no ghosting.

I could definitely hear the system at work

Razer has integrated a new vapor chamber into the Blade, which it says cools the laptop more efficiently than traditional heat pipes. There are also vents hidden in the hinge to pump air out — they face the screen, so you won’t see them unless you’re viewing the laptop from above. I could definitely hear the system at work; the fans were audible from across the room even when I was just browsing the web. (The stereo speakers, while about average for laptop speakers, are loud enough that you’ll still hear your games’ audio just fine.)

Their labor wasn’t quite enough to keep the chassis from heating up — the keyboard and palm rests were usually toasty beneath my hands, even when I was just bouncing between eight Chrome tabs and running a download or two. The bottom was often hot enough that I couldn’t use the laptop on my lap. But the fans do accomplish the more important task of keeping the chips from frying — during a few hours of gaming, the CPU never broke 90 degrees Celsius.

Speaking of gaming, that’s the whole point of the Blade Pro 17 — and it’s where the laptop shines. It was able to run Microsoft Flight Simulator on ultra settings (the max) at an average of 53 frames per second. That game has been cooking even some decent desktop systems, so 53fps is impressive for a laptop — especially one this thin and light. Bump a couple settings down, and you’ll easily break 60.

The RTX 2080 also proved itself to be able to handle ray tracing. On Shadow of the Tomb Raider’s highest settings, with tracing on, the Blade averaged 95fps. Both games were a smooth experience, and it’s hard not to be immersed when playing them on such a large screen. Gentler titles easily surpassed 100fps on their maximum settings. The Blade Pro 17 averaged 129fps on Overwatch, 139fps on Fortnite, 168fps on Apex Legends, and 231fps on CS:GO.

Games were a smooth experience

This 1080p Blade configuration isn’t what you’d buy for creative work, but it did an excellent job with that as well, completing an export of a five-minute, 33-second 4K video in just two minutes and 44 seconds. That’s comparable to the result I got from the Gigabyte Aero 15, which is designed for creative work. The Dell XPS 17 took around four minutes to finish the same task.

Those results are close to peak gaming laptop. They beat some big rigs we’ve tested, including Alienware’s prior-generation Area 51m, and thinner 17-inchers like the MSI GS75. If you need much better results than that, you’re going to be looking at systems with a Core i9 and even more elaborate cooling. I’m talking MSI’s GT76 Titan and Gigabyte’s Aorus 17X — much thicker, much heavier stuff that requires multiple power bricks. But if you’re looking for a decently thin 17-inch gaming laptop that you can cart around the house without too much difficulty, the Blade Pro 17 is about as good as it gets.

The best of the portable, premium best

Of course, that doesn’t mean it’s the only option. It’s still quite expensive, and if you don’t need a screen that’s quite this big, you can get great gaming results from any number of more affordable 15-inch machines. If you want something to use while out and about, plenty of 17-inchers like the GS75 and the Alienware m17 R2 can hold more juice (and if you’re at all willing to consider a 14-incher, the Asus Zephyrus G14 will last you all day). But there’s not another option that can offer this combination of performance, portability, and looks.

To start using the Razer Blade Pro 17, you’ll need to agree to the following:

In total, that’s four mandatory agreements and 15 optional agreements to use the Blade Pro 17.