Most of the time, if you’re reading a review of a dual-screen laptop, you probably only care about one feature: the two screens. Asus’ previous Duo models, the ZenBook Duo and the ZenBook Pro Duo, were decent devices, but the extra screen was the main attraction and the main justification for their premium price.

Asus’ ROG Zephyrus Duo 15, though, is different. It’s the first gaming laptop Asus has attempted with the dual-screen setup. The software is finally at a point where the second screen is legitimately useful. But the Duo is also a workstation featuring top-of-the-line chips that can compete with the best portable gaming laptops on the market. Screen count aside, it’s a very capable computer. 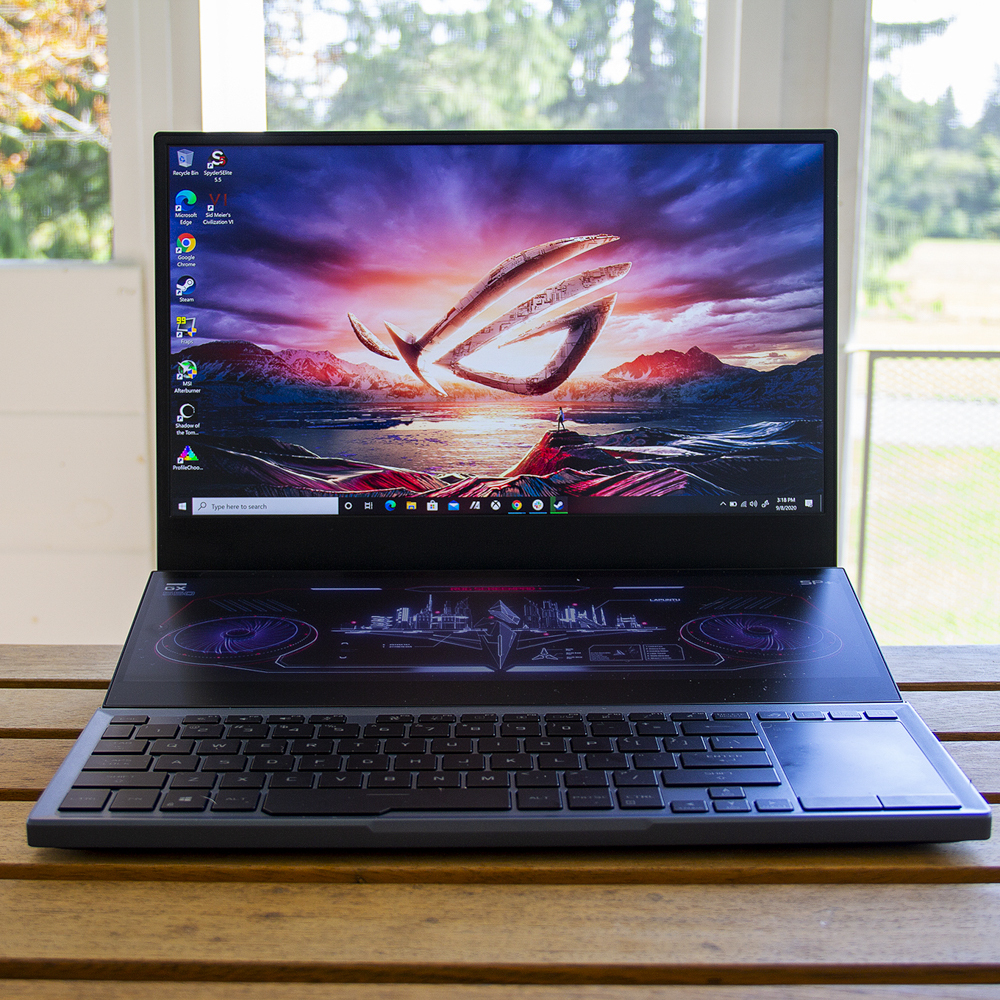 But it’s also quite expensive for a 15-inch gaming laptop — you’re definitely paying extra for the dual screens. And while the ScreenPad certainly has its uses, Asus hasn’t quite figured out how to unlock its full potential yet. I’d hold off on buying this until they do.

The Zephyrus is set up similarly to other Duo models. My unit has a 15.6-inch 4K UHD primary display. You can also get a 300Hz FHD panel, which would be the better pick if you’re buying this primarily to play games. Below that screen is the ScreenPad, a 14.1-inch wide, 3840 x 1100 touchscreen panel built into the back half of the keyboard deck, which lifts slightly off the chassis and tilts toward you at a 13-degree angle. Crammed into the front half of the chassis is an RGB keyboard with a tiny touchpad to its right.

The ScreenPad is too small to really do any work on (though the tilt means you don’t have to crane your neck to read it the way you do on the ZenBooks). But in a productivity setting, it’s a tool you can use the way you might use a tiny external display.

Swapping a window from one screen to the other is as easy as clicking and dragging it. While you do so, a small menu pops up with options to send the window to the opposite display, pin it to the Launcher, or extend it to occupy both screens.

You can load the ScreenPad up with your distractions — Slack, Twitter, Facebook, Spotify, etc. — to keep them accessible, but out of the way. You can keep reference documents on the bottom while you work up top. You can take notes downstairs while streaming a lecture upstairs. (The Zephyrus has stylus support, but doesn’t ship with a stylus.)

To use the ROG Zephyrus Duo 15, you have to agree to:

That’s seven mandatory agreements and 15 optional ones to use the ROG Zephyrus Duo 15.

Asus has a few handy features to help you organize everything. In the Launcher menu, a secondary dock that lives on the left side of the ScreenPad, you can quickly access a number of apps, including Number Key (a virtual numpad), Handwriting (where you can scribble on the ScreenPad, and the text will show up wherever your cursor is), and Quick Key (where you can tap various commands like cut, copy, and paste). You can add whatever programs you want. There’s also a button that immediately swaps the two screens’ tabs and automatically resizes them to fit, and a toggle that locks and unlocks the keyboard. And you can create “task groups” of apps or tabs, which you can then open up later with a single click.

Asus has really worked out ScreenPad’s kinks since the days of the ZenBook Pro Duo, its first shot at a dual-screen OLED desktop replacement. Everything worked as advertised. Windows resized appropriately and kept the widths they were assigned. Things closed and opened when I needed them to. All told, as we saw with the ZenBook Duo, the ScreenPad works just fine for everyday use.

But whether it’s well-suited to gaming is another question.

The ScreenPad works just fine for everyday use

Off the bat: this is a real gaming laptop. It ran Shadow of the Tomb Raider at 1080p at an average of 87fps. That was at the highest settings, with ray tracing on Ultra. That’s not the best result you’ll see, but it’s only slightly worse than the Razer Blade Pro 17, which averaged 95fps. On Civilization VI, a game where I can see the dual-screen setup being quite useful, the Zephyrus averaged 145fps at the highest settings. Of course, this model is locked to displaying 60fps, so you won’t be able to see those frame rates. I’d recommend that serious gamers go for the 300Hz configuration (especially since you’ll see a significant frame rate drop if you try to max out these titles in 4K — that’s a big ask even of modern desktops).

It’s easy to see how a second screen could be a great addition to a gaming rig. While you play, you could keep Discord chats and stream controls on deck, follow along with a YouTube tutorial, swap between Spotify playlists, adjust settings on the fly in Asus’ Armoury Crate app, or keep an eye on clocks in MSI Afterburner. I’m sure you have ideas of your own. Some of these tricks do work, but some are still more trouble than they’re worth. It depends on the game.

For example, if you run Tomb Raider in full-screen mode and try to click on a Discord chat downstairs, it minimizes the game. You can fix this problem by using windowed mode, but tinkering with the ScreenPad still tabs you out. Civ VI was friendlier to the ScreenPad; the game stayed open and kept going while I hopped between displays, but typing in my downstairs Discord chat still cut the audio, so I wouldn’t have wanted to do it often. For both games, I ended up mostly using the ScreenPad to keep an eye on Afterburner while I played and make the occasional adjustment in Armoury Crate.

So, again, the Duo’s form factor does have its uses for gaming — particularly with turn-based titles like Civ where you may just fancy a quick break from time to time. But you should manage your expectations because it’s not ideal for all the use cases you might think of. (And if I’m buying a laptop for gaming, I’d really prefer not to have to run anything in windowed mode.)

You don’t need these specs to get this performance

Asus says it’s working with game developers to incorporate the second screen into some upcoming titles. In Dying Light 2, for example, it says you’ll be able to keep your co-op chats, inventory, and mission log on the second screen. It would certainly be a huge help in a game like Civ VI if you could relegate some stats and overlays to the ScreenPad and reserve the primary display for gameplay. Those features aren’t here yet, though, and that mitigates the benefit of the dual-screen setup.

Elsewhere, it should go without saying that the Core i9 and 32GB of RAM can handle a heavy load of office work (Twitch, Discord, Slack, Spotify, photo editing, Zoom calls, and a heap of Chrome tabs) just fine. Of course, that’s the case with most premium gaming laptops. You don’t need anything close to these specs to get that performance. It did very well with creative work, completing an export of a 5-minute, 33-second 4K video in two minutes and 56 seconds. That’s faster than the Dell XPS 17, the Alienware m15 r3, and the MSI GS66 Stealth took to complete the same task. The Blade Pro 17 was only a bit faster, taking two minutes and 42 seconds.

The one thing to note is that you should expect the Zephyrus Duo to live on a desk — and that’s not just because it weighs 5.29 pounds (2.39kg). I averaged around an hour and 48 minutes of battery life (The test involved fully working in both screens, hopping between a dozen Chrome tabs, Slack, and Spotify, on the Battery Saver profile, with the primary screen at 200 nits of brightness and the secondary screen at 50 percent.) That’s not necessarily unexpected for a 4K gaming laptop running two screens and an RGB keyboard, but it’s still not a great result — the Blade Pro 17 got two and a half hours of the same workload.

Additionally, get ready for some heat. The Duo uses Asus’ AAS Plus cooling, which includes a 28.5mm vent behind the ScreenPad, five heatpipes, four heatsinks, a unique thermal paste called Liquid Metal, and an anti-dust channel that’s supposed to dispel debris from the chassis to prevent it from accumulating on the fan fins. (Don’t worry, it doesn’t spray dust or anything.) The system kept the processor from throttling, but the bottom of the chassis got so hot that the laptop wasn’t feasible to use on my lap, even when I wasn’t running games.

And finally, you can forget using this touchpad, which is a tiny 2.3 x 2.9 affair with discrete clickers (though it can become a touchscreen NumPad, which is nifty). Since there is no wrist rest, the keyboard, while colorful, isn’t super comfortable to use because there’s nowhere to put your hands. (The Zephyrus ships with a rubber wrist rest which is nice, but doesn’t help all that much.) I imagine anyone who buys this will be plugging a mouse in immediately. Again, none of this is unexpected for a 15-inch workstation, but if you’re looking for something that you could occasionally chill on the couch with, count the Zephyrus out.

The good news is that if you decide to plug in peripherals, you’ve got a plentiful port selection. There’s a power port, a microphone jack, and a headphone jack on the left side; two USB-A ports and a USB-C with DisplayPort, Thunderbolt 3, and Power Delivery 3.0 on the right side; and another USB-A, an Ethernet, and an HDMI on the back.

Overall, the Zephyrus Duo 15 is a capable gaming laptop. But the 60Hz screen on this configuration limits the capabilities of its chips. (And let’s be honest: while Asus may be trying to market this laptop to content creators, it’s a Zephyrus, and most people will be buying it for games.)

I can’t see myself using the ScreenPad super often

Given that you can purchase models like the Blade Pro 17 that deliver comparable frame rates for several hundred dollars cheaper, what you’re paying the big bucks for is an extra bit of storage and the second screen.

The ScreenPad does add to the gaming experience. But it hasn’t revolutionized it (at least, not yet). Until titles come out that are really optimized for this setup, I can’t see myself using it super often. The Zephyrus Duo is an impressive piece of technology. It may be worth $3,699 in the future — but it’s not there quite yet.