It’s really great, but the limitations are becoming grating

Share All sharing options for: The new 2020 iPad isn’t enough for Zoom school

The new 2020 edition of the iPad, now in its eighth generation, continues to be an iPad. It is very good at iPad things: watching movies, reading, browsing the web, editing photos, and so on. Starting at $329 for a 32GB version, it is a remarkable deal.

Over the past few years, Apple has made a relentless push to get the iPad past the old criticism that it’s “just a big iPhone.” It’s made into more of a computer, able to do tasks that once were solely the domain of laptops.

So the thing about “iPad things” is that there are more of them now: more things you’d like an iPad to accomplish, even the lowest-tier iPad. Although this iPad with its new A12 Bionic processor is still legitimately great, some parts are starting to feel stuck in the past. It’s great, but some of its limitations are starting to grate. 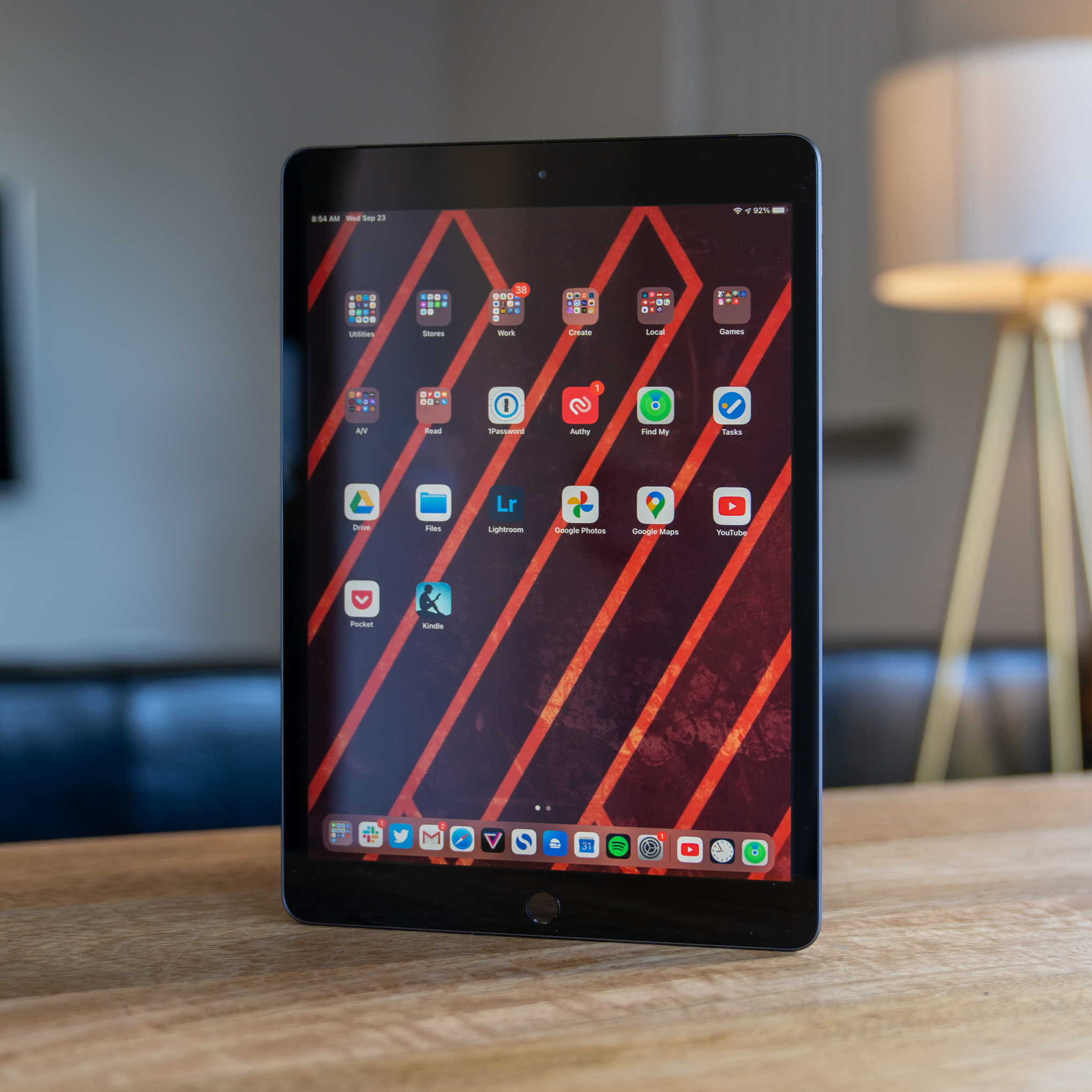 The eighth-gen iPad is unchanged from the last generation. It still has a 10.2-inch screen that looks great even though it doesn’t have some of the more techy features of more expensive iPads. If you have used an iPad Pro and care about things like ProMotion or a laminated display, they haven’t made their way down here yet.

Neither has the iPad Pro’s design — it has only reached the Air. That means this iPad still has awfully large bezels on the top and bottom. It does make the iPad feel a little out of step with the rest of the gadgets and tablets you’ll see in 2020, where bezels are the exception rather than the rule.

Touch ID is still on the big, circular fingerprint sensor, which is as satisfying as ever to click. There’s also a headphone jack, and I do genuinely think it’s an important feature for this device, in particular. Apple wants to push the iPad into classrooms, and the idea of trying to hang on to dozens of Lightning headphones or Bluetooth headphones sounds like a nightmare.

Because Apple is keeping the same design, that means it’s also keeping the Lightning connector. I think we’ve reached the point where I can confidently call that a mistake. USB-C isn’t something that’s just reserved for pros anymore: it’s on the iPad Air and every Android phone no matter the price, and it’s also on every Chromebook that Apple is trying to replace in classrooms.

I understand the hassles and problems of USB-C, and I also understand that the switching cost from Lightning to USB-C isn’t trivial. But it’s the standard now, and the iPad ought to hew to it. I believe the same about the iPhone, by the way, but I realize the switching costs there are even higher than they are for the iPad.

The iPad has a couple of cameras, but they’re nothing to get super excited about. They’re better than what you’ll find on competing tablets — but it’s awfully hard to even find competing tablets for the iPad in this price range. The most notable thing about the cameras to me is that the front-facing one is in the wrong spot: on the side in landscape mode.

If you have the iPad connected via its Smart Connector to a keyboard, it will be in landscape mode. That means your camera is off on the left side instead of top center, which makes videoconferences awkward.

Finally, the same hardware means that the iPad has the same support for the Apple Pencil — the first-generation $99 Apple Pencil, I should point out, with its weird Lightning charging connector and easy-to-lose cap. I can see a little lag when using it compared to what I get on an iPad Pro, but not enough to say it’s a problem.

That’s several harsh things I’ve said about the iPad’s hardware, so let me emphasize the essential context: it’s an iPad! That means it’s thin, light, and sturdy. The fact that Apple achieved this quality of design many generations ago doesn’t take away from its quality today.

The only major change Apple made with this generation of the iPad was swapping in a new processor, the A12 Bionic. It adds a graphical boost and a neural engine for some AI tasks, but to me, its importance is that the iPad continues to feel fast overall and that it will continue to be a computer that will last you for years.

You can get it with cellular connectivity, but if you’re spending the extra $130 for that, I think you should probably consider jumping up to the Air.

But the most important spec in the iPad is the storage on the base $329 model: an embarrassingly low 32GB. That’s simply not enough. Even the iPhone SE clocks in with a minimum of 64GB, which is what this iPad should have. To get more, you need to step up to the $429 model, which has 128GB.

I say this knowing full-well that many Chromebooks in this price class come with an equally measly amount of storage. But the difference is that the iPad has a massive library of incredibly good apps that need to be stored locally on the tablet. Chromebooks are designed to work mostly with web apps and cloud storage. Locally stored Android apps still aren’t really that important for them.

If you get the base model with 32GB, expect to be managing your storage a lot more. Photos, video, games, and apps take up a bunch of space, and you’ll hit your limit quite fast.

The new version of Apple’s tablet software, iPadOS 14, is not a major change over last year. The biggest new feature to me is Scribble, which lets you enter text using the Apple Pencil directly into text fields. It’s neat, but it’s only good for short bits of writing. For the rest, use Apple Notes, which has excellent handwriting recognition.

As a tablet OS, iPadOS has a couple of quirks but is overall really solid. It feels fast and fluid, and once you get the hang of split-screening, you can do just a ton of things at once. The iPad also has a huge library of apps, most of which work well in split-screen view. I truly enjoy using iPadOS, and I can do virtually all of my work on an iPad — including this very inexpensive one.

But it also has two critical flaws that I’m less and less willing to forgive.

The first is that it’s a very annoying device for videoconferencing. If your kid is in “Zoom School,” know that Zoom, Meet, or any other group video calling app on the iPad is frustrating. Unless that app is the frontmost full-screen app, your video cuts out. So if you slide a window over or even go split-screen, everybody will know you’re doing something else in another window.

The biggest problem I have with iPadOS is that it doesn’t support multiple users.

If you want to hand your kid or somebody else in your home your iPad, you are handing them your entire digital life. There’s no way around it: no kid mode, no locking down certain apps behind a password or Touch ID, nothing. Compare that to other computer platforms: the Mac, Windows, Chrome OS, Linux, many Android phones, hell, even the Apple TV all support multiuser.

The iPad does not. Not every household can afford to buy multiple iPads, so sharing one in a household should be easier. Amazon’s Fire tablets don’t hold a candle to the iPad in terms of app selection or hardware quality, but they have excellent options for turning them into shared family devices.

Even if you stipulate that everybody should get the $429 128GB model, the eighth-gen iPad is a very good deal. Apple’s keyboard costs $159 on top of that, but there are less expensive third-party options out there now.

As I use it, I am continuously impressed with how well the iPad works and how much I can do with it. No other computer makes it as easy or as fun to bounce from editing photos to playing games to kicking back and watching some Netflix. And though there’s a bit of a learning curve, even this iPad can be used to do real work.

This iPad is very good at the traditional “iPad Things.” But the list of things we’re asking of our iPads as we are stuck at home is getting bigger. iPad things include using Zoom. iPad things ought to involve using the same charger we use for our laptops. iPad things involve sharing the device with our family members or even roommates.

That’s the thing with iPads: they’re great, but they could be much more.

Much like the iPhone, to use an eighth-gen iPad, you have to agree to:

These agreements are not negotiable, and you cannot use the iPad at all if you don’t agree to them.

The iPad also prompts you to set up Apple Cash and Apple Pay at setup, which further means you have to agree to: