Refined, but not quite enough

The most recent Origin EVO15-S came out in early 2018. That was an exciting time for laptops because it was the first generation of the Max-Q design, which brought about thinner and lighter gaming laptops than seen before. Asus released the ROG Zephyrus only a few months earlier, and the MSI GS65 Stealth Thin and updated Razer Blade 15 — some of the first portable systems that had a hope of running AAA games — came soon after. The 2018 EVO15-S arrived at a time when the world was first starting to take thin and light gaming seriously.

It’s 2020, and the EVO has returned. The laptop has dropped some weight, upped its specs, and brought a modern, matured design to the table. But while it doesn’t have any glaring flaws, today’s gaming market has more powerful portable 15-inchers. The new EVO has some nice features, but there’s very little it does that those competitors don’t do better. 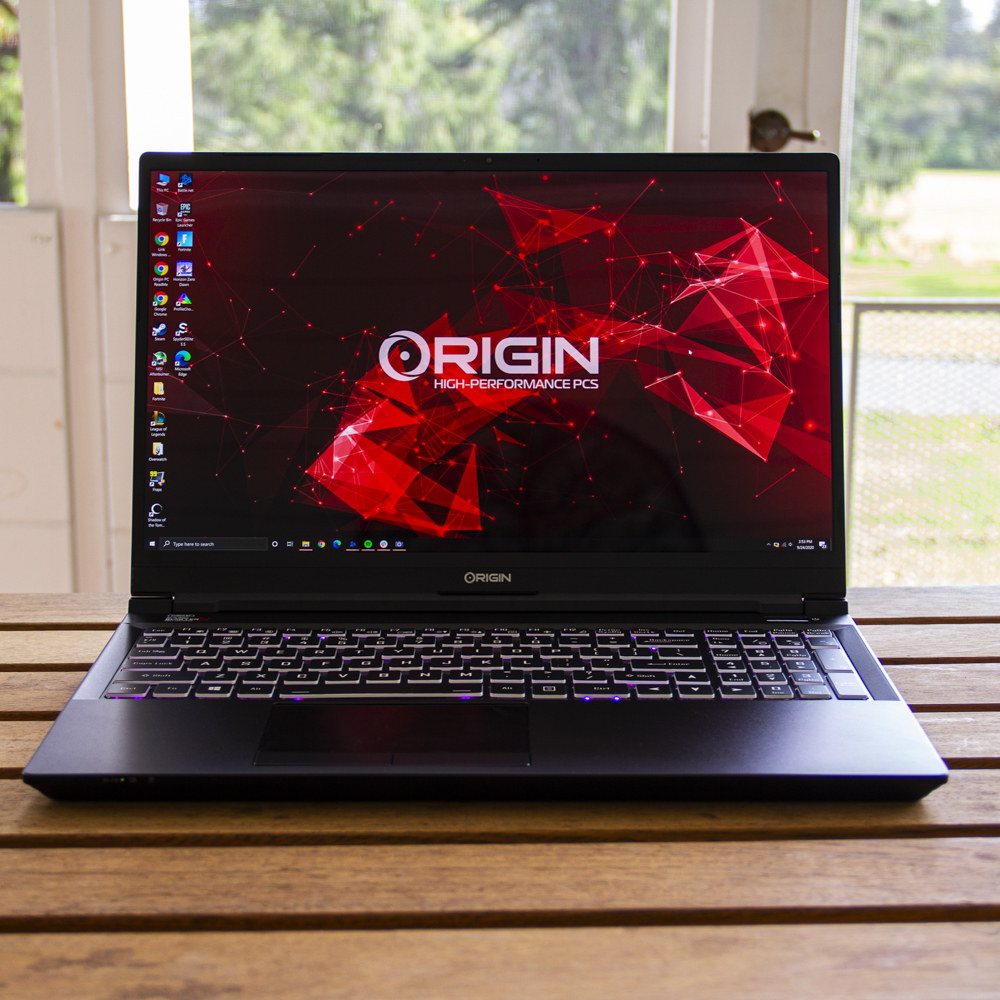 There’s one strong argument for buying it, though: the customization options.

EVO configurations start around $2,000. They all come with an eight-core Core i7-10875H and an RTX 2070 Max-Q or RTX 2080 Super Max-Q. But then there are three screen options, nine memory options (including 2400MHz and 2666MHz), 20 SSDs (NVMe and M.2 SATA options, including brands from Samsung to Corsair) with two slots, and a whopping 20 different colors. (There are some really cool ones — you can see them on Origin’s website.) The company offers personalized laser etching, HD UV printing, and custom prints.

Sure, you can customize other laptops using cases and skins, but the ability to order a personalized paint job from a manufacturer is pretty unusual (especially at this price point). If you’re searching for a specific aesthetic or combination of components that you can’t find anywhere else (or you’re just very picky), the EVO15-S is made just for you.

The design has matured since 2018

The design has matured since 2018 as well — for a refresh, the EVO doesn’t look at all out of date. The bezels are much smaller, particularly those on the sides. The 15.5-inch screen has a respectable 83 percent screen-to-body ratio. The logo on this EVO’s lid is a sleeker, friendlier version of the one Origin stamped on the 2018 model — it looks nice but wouldn’t draw undue attention in a meeting or classroom. And Origin has ditched the obnoxious red-printed power button, which used to live in the center of the deck right below the Origin logo on the bottom bezel. That’s been replaced by a much more attractive silver button on the right side.

There are ports on the back, too.

The slimmer form factor hasn’t compromised the sturdiness of the build, though. There’s very little flex in the keyboard and touchpad, and none in the display. And I really like the texture of the palm rests, which feel smooth and high-quality without collecting a ton of fingerprints.

This laptop was made for gaming, so let’s get into that. As a reminder, this configuration has a 4K OLED screen that’s only 60Hz, meaning you won’t see higher than 60fps no matter how many frames the chips are churning out each second. Right off the bat, that means this model in particular isn’t the best choice for serious gamers. (It also exhibited some serious ghosting.) It’s a better option for folks who might play the occasional game but also spend time doing some creative work or watching Netflix with high expectations (it gets up to 407 nits and covers 100 percent of the sRGB gamut and 97 percent of Adobe RGB). Still, these results can give gamers a sense of what to expect from other configurations.

I really like the texture of the palm rests

I ran several games at native resolution to see whether the EVO can handle gaming in 4K. There are actually some titles where it can — but you probably won’t be surprised to hear that if you want the best performance out of the latest AAA offerings, you’ll be bumping the resolution down.

The first test was Horizon Zero Dawn, one of the most taxing games on the market that has been giving even desktop Nvidia cards trouble. The EVO only averaged 45fps in 4K, but it hit a more comfortable 67fps in 1080p. (All games were run at their highest possible settings.) That delta was even larger with Fortnite, which the EVO ran at an average of 38fps in 4K and 107fps in 1080p.

Kinder titles ran just fine in 4K, though. The EVO averaged 102fps on Overwatch and 192fps on League of Legends at native resolution. With Shadow of the Tomb Raider, the EVO proved itself capable of handling ray tracing — it ran the game at an average of 50fps in 4K and 94fps in 1080p with that setting maxed out. That’s comparable to (but slightly worse than) the GS66 Stealth. (The CPU didn’t pass 92 degrees Celsius throughout any of the testing.)

It’s not quite the best of the best

Broadly, these are fine results, and you’ll have a playable experience with whatever games you’d like — they’re just not quite the best of the best.

If the EVO were exceptional in other areas, that could help make up for slightly weaker performance. There are a couple very nice features. I actually like the webcam, which is something I don’t say about webcams very often. It’s grainy, but it takes a decent photo — you won’t be washed out in bright settings or totally dark in low-lit ones. There’s also a lot that I like about the keyboard. Origin managed to squeeze in a numpad (a feature you don’t see on 15-inch laptops every day) without having to make the letter keys uncomfortably small. (I’m particularly excited about this because it’s really difficult to play Microsoft Flight Simulator without a numpad — you have to remap a bunch of keys.) The EVO’s is also probably the most beautiful RGB keyboard I’ve ever seen. I’ve used a number of colorful gaming laptop keyboards, but there’s just something different about this one. The lights shine really neatly through the keys without bleeding into each other, and some of the effects (particularly Wave Mode and Ripple) are really stunning.

That’s five mandatory agreements and 13 optional ones to use the Origin EVO15-S (2020).

But there are also some issues. The space bar on my unit was a bit squeaky, making it both cringey to press and awkward to listen to all day. This is a small thing, but think of how many times a day you press the space bar. Similarly, the touchpad, while a fine size and quite smooth, has plastic discrete clickers. You’re welcome to your opinion on these — I know some people love them. But they make me feel like I’m using a 2009 Dell Inspiron, and they also require your fingers to jump down to the bottom of the deck each time you need to click. Again, that’s a pretty small thing, but given how much clicking you do throughout the day, the effort adds up.

There are some issues

Battery life wasn’t great either — my unit made it through two hours and 39 minutes of non-gaming productivity work with the screen at around 200 nits of brightness. This is a gaming laptop with a 4K display, so I wasn’t expecting anything close to all-day juice. Still, that rules out doing much work on the go, if you intend to use this as a multipurpose device (and if you don’t, for the love of God do not buy the OLED model). It’s also another area in which the EVO loses out to the GS66 Stealth, which managed around five hours.

Finally, the speakers are not very good. The audio gets quite loud, but it has very little bass or definition, and there’s some weird distortion in the lower tones around maximum volume. Game audio was fine, but blasting my Spotify library was just a weird experience.

Like I said, the EVO15-S is a well-built laptop with some nice features. And there’s definitely a market for it, particularly among folks who are looking for unique customizable designs and don’t want to buy a skin. (Seriously, take a look at some of the options on the website.)

The EVO is far from the worst option

When it comes to gaming results — the most important feature — the EVO is far from the worst option. But it’s also not the best. That’s compounded by the limitations the 60Hz screen places on the results of this particular configuration’s performance, and by a few other frustrations with the system. Overall, if the EVO isn’t offering better frame rates than the GS66, or a significantly better price (the GS66 with half the storage but double the RAM, as well as a 300Hz screen, goes for $2,799), it’s hard to recommend it as the best option for most gamers.

You can get $100 off the configuration of your choosing by using the offer code THEVERGEEVO15S2020 at checkout.
Buy at Origin
Gaming